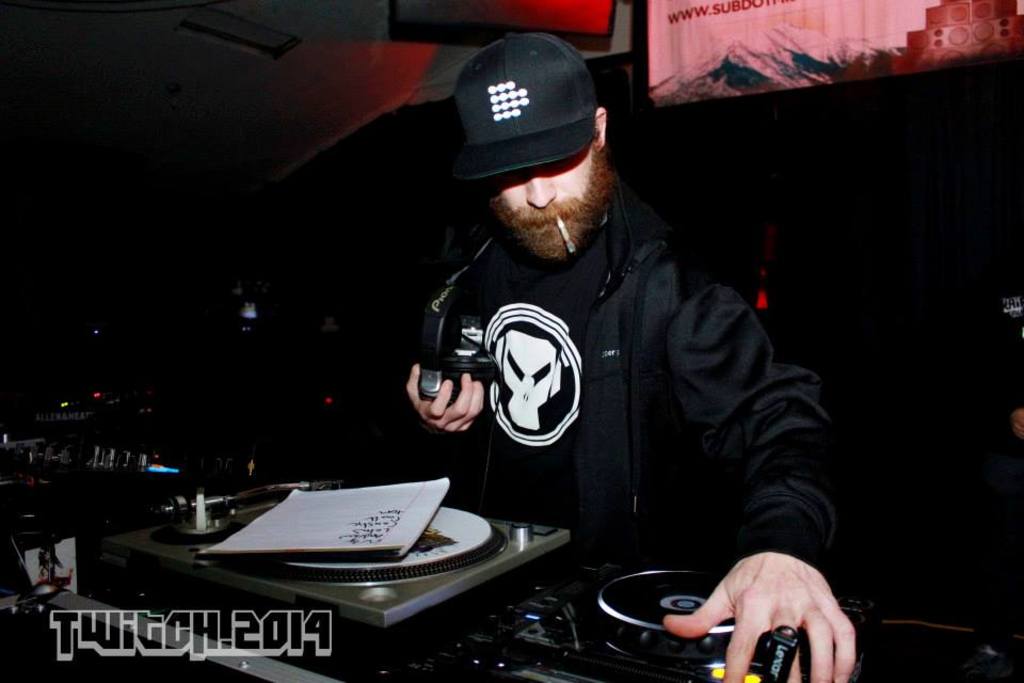 Sub.mission Presents: Subliminal at Cervantes Other Side 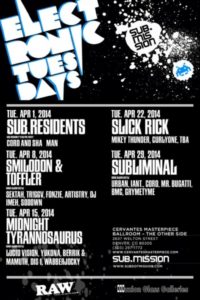 This Tuesday features another installment of local promoters Sub.mission’s successful Electronic Tuesdays at Cervantes Other Side in Five Points. This week will consist of another DJ battle for the chance to play Sonic Bloom Fest this summer. The openers battling are Urban, Iant., CORD, Mr. Bugatti, BMC, and GrymeTyme. Headlining the show is local Sub.mission resident drum ‘n’ bass/dubstep DJ, Subliminal. We caught up with Subliminal recently to ask a few questions about his rising career and affiliation with Sub.mission.

303: How long have you been a Sub.mission resident DJ, and how did you get started with them?

I moved to Denver in the summer of 2007, right around when Sub.mission was getting started. Nicole, who runs Sub.mission, was one of the first people I found on the internet when searching for bass heads. She invited me over to the internet radio show Dank Dealz that all the original Sub.mission residents played at, and we all hit it off quite well. There weren’t quite so many dubstep DJs those days, so it was really nice to meet a group of like-minded people.

303: What made you relocate to Denver, and where were you located before?

I was born and raised in Memphis and lived in Atlanta for six years before moving here. Atlanta was a great experience and I learned a lot there as a DJ, promoter, and as a person in general. I got into dubstep a little too early for my own good there,  you could say. In 2005 and 2006 most people were just not feeling the sound too much. I brought Joe Nice there in 2006; saying there was 50 people there might be a stretch.

As great as Atlanta was, I think I was just ready to move out of the south and take another step in life. I was visiting my sister and brother-in-law, Lucas, who live here in Denver.  Lucas suggested the idea of moving here and I just instantly knew it was the right idea. I took the plunge and was here a few months later. It was definitely one of the best decisions of my life!

303: How did you get into perforfming as a drum ‘n’ bass and dubstep DJ? What is your history with other forms of music; do you play any instruments?

As a youngster, I was never really overly excited about music. I tried various musical instruments in band class growing up, but nothing really stuck because I just wasn’t interested enough in them. I didn’t really feel music on the next level until I heard sub bass. Mid 90’s Memphis rap was where I got mainly introduced to bass.

A few years later I went to my first drum and bass show, when I was a senior in high school, and I was instantly hooked. It was finally what I was looking for. Starting to DJ just seemed like the logical thing to do because of how piqued my interest was, and it was really the only way to get my fill for beats and bass. I moved to Atlanta to further integrate myself into the drum ‘n’ bass scene: met people, started getting gigs, and ended up throwing shows there as well.

As some years went by, a bunch of my favorite producers started changing their style and I was not very fond of where the sound was going in general. I heard my first dubstep tune in 2005 and it was perfect timing. I had always been strictly into drum ‘n’ bass for the most part and to hear a different kind of electronic music I could identify with was huge for me. I was hooked on the early Rinse FM dubstep radio shows from Youngsta, Hatcha, and N-Type, and my love for dubstep has never waned since.

303: What is the funnest show you have played to date? Who was the coolest to play with?

This is a tough one because of how many great experiences I’ve had so far! The most fun would probably have to be opening for Caspa back

several years ago, in 2009 I believe, at Cervantes Other Side. That was the first time I had played for a totally packed and rowdy crowd here, so it was pretty special for me. As far as coolest, although opening for my main dubstep inspiration Youngsta a few times ranks up very close, I’d have to go with opening for Andy C at Beta a few weeks ago. I’ve been DJing for nearly fifteen years, and it has always been on my bucket list to open for him. It was very surreal and the experience definitely lived up to the expectations.

303: What artists are you playing a lot of right now, who are you listening to?

Too many to name! There have been so many good new producers popping up on my radar lately, not to mention all of my favorites who have been keeping it real for a long time. The style of dubstep I’m into is stronger than ever and it would really be a disservice to mention just a few because of how many great producers there are out there.

303: How long have you been spinning EDM?

303: Do you produce any music yourself?

With some shame, I have to answer “not really.” I acquired some gear long ago and have been tinkering here and there for a while, but don’t have many results to show for it. That is one of my major goals for this year, to finally commit to spending real time on it and cranking some things out. I have everything I need to start and have lots of amazing producer friends willing to help and teach me things. There are no excuses anymore, so keep your ears peeled!