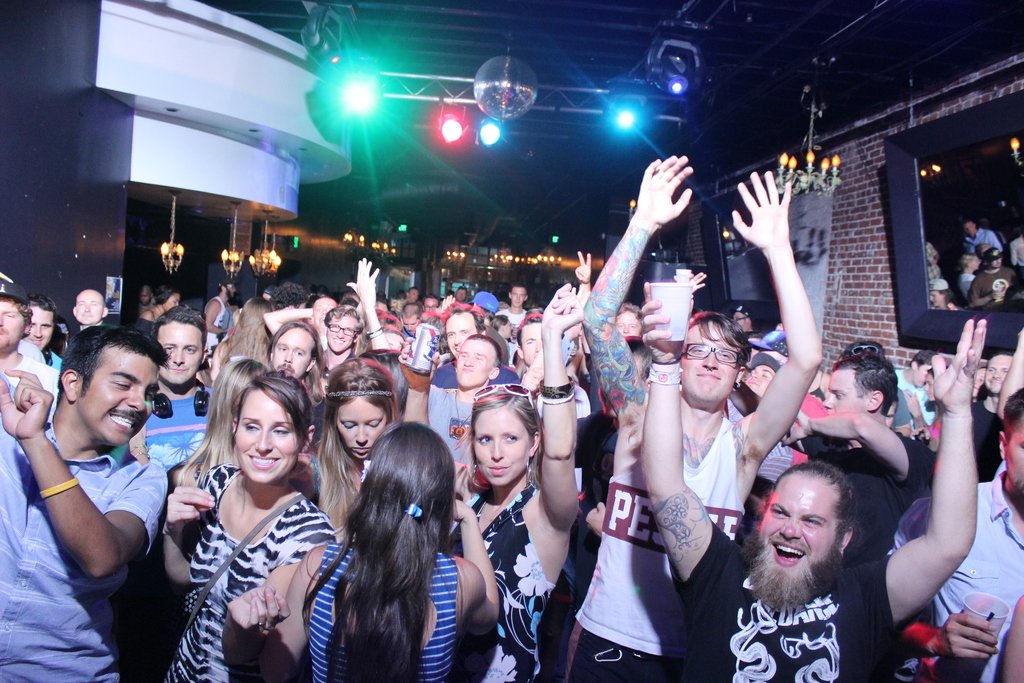 Everybody was Kung-Fu fighting… or er-dancing?

In 1977 the film Saturday Night Fever was released in hopes of turning more people onto a genre that had—until then—had not quite reached it’s prime. Now, nearly forty years later, disco is making a comeback through the tidal wave of techno that has swept Millennial pop-culture.

Dubbed nu-disco, the genre has reemerged with a new name and is finding its niche in Denver.

Every Friday night at Bar Standard you can catch the flashiness, the fun and artists you’ve probably never heard of—but most likely will soon—thanks to Denver Disco. A nu-disco collective started in 2012, Denver Disco is dedicated to bringing the freshest talent, amping up the Denver dance scene and connecting people with similar interests.

303 Magazine recently sat down with Nick Callaio, co-founder of Denver Disco to get the lowdown on the nu-disco scene in the Mile High City.

303: Where did the idea for a disco themed collective come from?

Callaio: We thought that it would be a good idea to do disco shows because nu-disco was such an emerging genre at the time. When we had the idea it was right before Daft Punk even announced their new album and brought back the whole disco/funk thing. Obviously we caught on at the right time. After looking at Submission and Denver Drum and Bass we realized there was definitely a place in Denver for nu-disco because everyone is very open minded here. And it caught on.

303: What goes into starting something like this? You’re a pretty young entrepreneur. How did you get this going?

Callaio: It took a lot of networking, a lot of talking and a lot of convincing. As far as a startup, it’s all about keeping your head in the game. You have to treat it like your little baby. You have to be nurturing, holding it, always looking after it. If we turn our back one time, something wrong might happen.

303: Do you feel like there was any kind of scene for disco before Denver Disco?

Callaio: You know, there was. It was that sub-genre from house. But the scene was disconnected. There would be disco shows here and there but the only person who really did them were The Hundred at The Beauty Bar. But he really focuses on the underground house music and disco just happened to be a sub-genre. We do disco mostly but we still do house too.

303: Who are your resident DJ’s and where did you find them?

Callaio: My friend Pruitt, who I’ve known for a little while now is one. Neal Robbins is Fun Factory. He’s been in the scene for awhile. He’s been spinning nu-disco for awhile. Falcon Punch, he’s a really good producer and is starting to get his footing around here—even in the national scene. Then we have Sightlow, we just added him. He’s a 21-year-old kid from North Carolina. He used to do trap music but he saw the potential in the genre so he changed his name and made a side project. Then I have Mantaray. He is a very, very, interesting character. He’s been spinning nu-disco for a little bit now. We basically just found people that had this same mindset, really, and went with it.

303: Why did you choose Bar Standard?

Callaio: We actually started at the Funky Buddha. That was our first one ever. We moved it over to Bar Standard because there was more sound, more lights, better atmosphere for it. Nothing against the Buddha but the atmosphere at Bar Standard was much more complimentary to the genre.

Callaio: First I think daytime—daytime pool party… But realistically… NORAD has that underground club feel but it’s really hard to describe. I like it dark. I think Bar Standard is really good because it has has comfy couches, huge mirrors, that 360 bar. But to each their own I guess. My prime time would definitely be pool parties.

303: Who is Business Casual Disco? How did you first hear about them?

Callaio: I really didn’t know about them until Camp [Bisco] nine and I saw them at the silent disco. My mind was blown away. My friends from the east really liked them.

great decision to bring them because they are exactly what we do.

They are straight nu-disco they don’t do any house music or anything. We think its going to be a pretty big one.

303: What size crowd are you trying to draw?

Callaio: We try to aim for between 100-200. Consistently its really hard to hit that. Life isn’t one straight path. There’s always peaks and valleys and peaks. We don’t try to overcrowd it.

303: In your opinion do you prefer the smaller, intimate setting or are you more into larger, rave-style shows?

Callaio: Thats really hard. I think it varies from artist to artist. Having someone like we had last week—Zimmer—having someone like him the crowd we had was perfect. 250-300 people. That was a really good. But if you bring Disclosure you want to pack the club. And that definitely has its place in the scene. But right now, Bar Standard isnt even a club. I’m not trying to trick people into thinking its a club. I definitely like the smaller crowds though. Being personal with everyone is a really good thing for my job. If you have a thousand people there it’s really hard to talk to everyone and I try to do that. I want to be receptive to what they think, what they want.

303: What’s in store for the future with denver disco? Where do you think you’ll be at a year from now? These kinds of things can turn over pretty fast.

Callaio: I think our team is pretty on top of it. We’re constantly looking at trends in Denver—trying to stay creative, see what else we can do.

It’s not even about bringing the best right now but finding those people who are going to hit very soon.

Thats what you want to do.

If you keep on doing shit like that then its really going to keep on going. If you’re just the person that brings Disclosure, the biggest acts you can, there’s no building. There’s no character or personality. You have to curate the party around the whole flashiness of it. That’s why disco is disco and you want to catch it.

Callaio: Music is tight but disco is a lifestyle. You have to play the part. Obviously I like it. It’s just about having a good time. It’s about dancing, smiling and seeing your friends. What I like about disco and what we aim towards is bringing people with a more developed palette. The people who went through a lot genres and now are like, disco, yes! Maybe they would have gave up on electronic music by now.

But it brings everyone together.

303: What would you say to someone whose entire idea of disco is completely based off of some 1970s concept?

Callaio: I would say keep it going, its badass. You know studio 54 and whatever. That’s how it started and thats why it’s so badass. I mean shit, disco can be anything. There’s always a disco ball in a the club. Disco can be anything. We’ve had people in their 40s come to denver disco because they thought it would be like that.

Written by Erica Lindberg of 303 Magazine