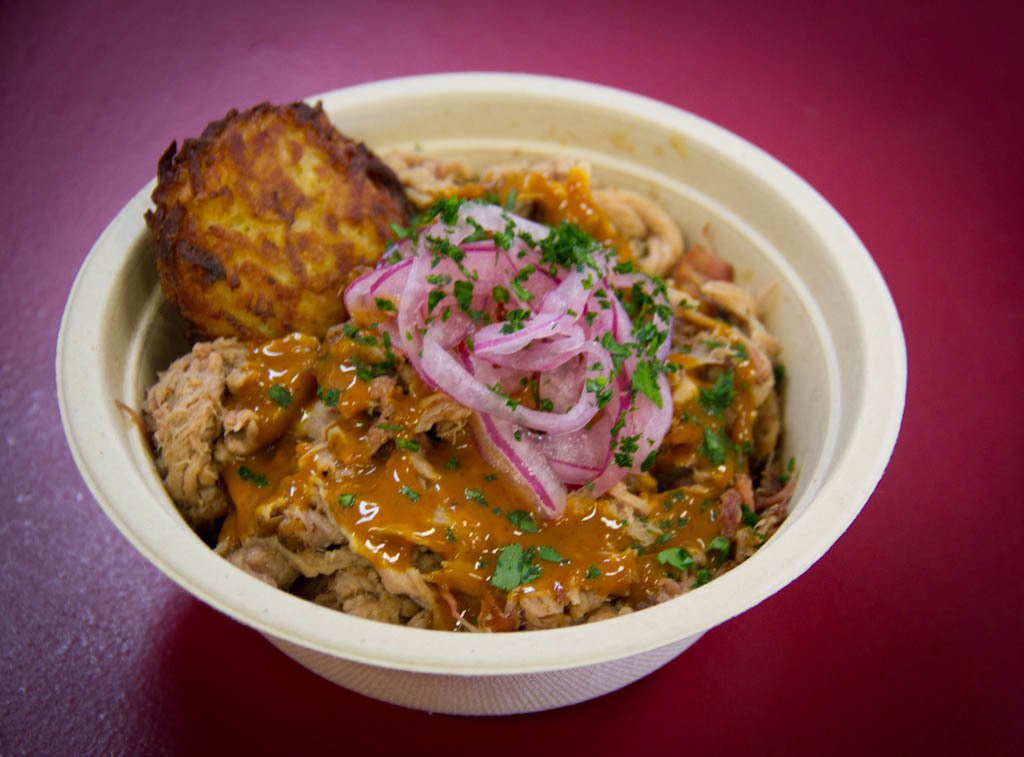 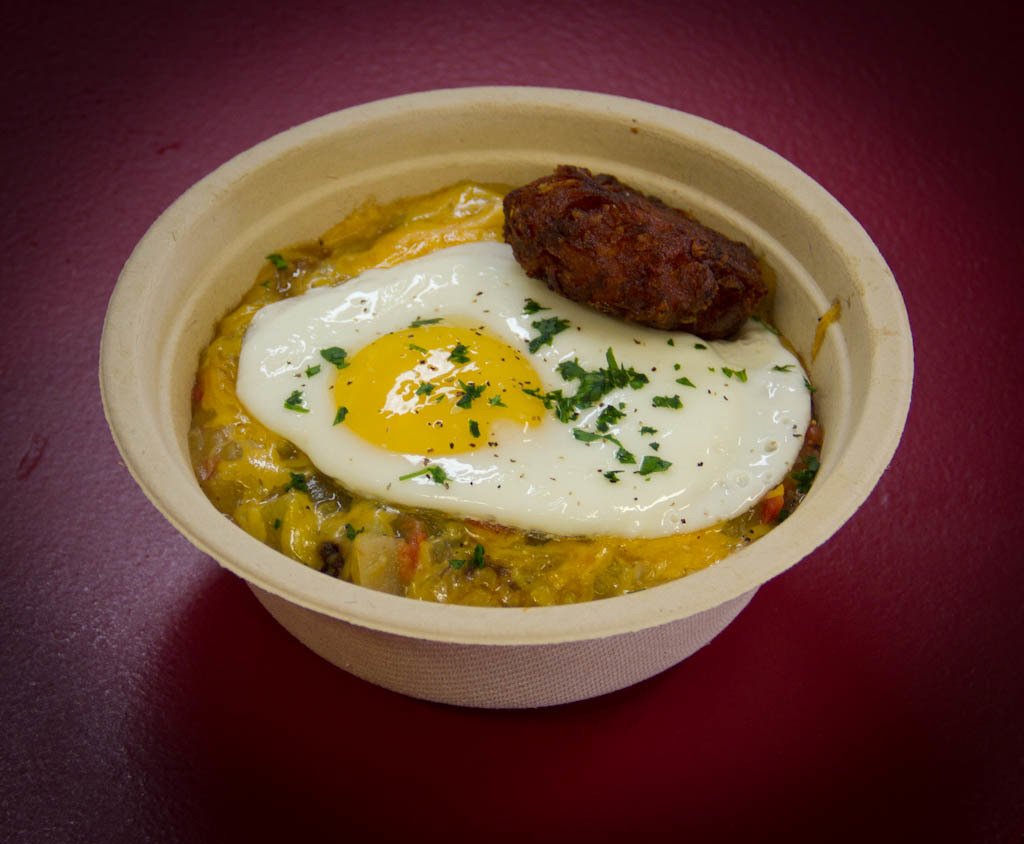 What: Traditional Jewish comfort food with a subtle Southwestern spin

Pros: Plenty of vegetarian options, the latkes are gluten-free, and for having such a small menu, there is truly something for everyone. Filling portions for a reasonable price are ideal for either breakfast or lunch.

Cons: You probably won’t be able to pronounce most of the words on the menu, but you will learn some Yiddish in the process.

The unassuming store front that is Latke Love, is nestled in the Park Hill neighborhood, just a few blocks off of busy Colorado Blvd. The simple signage out front wouldn’t necessarily capture the attention of passersby, but once you’ve sampled the cuisine inside, chances are you’ll be hooked.

Growing up in New Jersey, you couldn’t spin a dreidel without hitting a proper Jewish deli serving up blintzes, knishes, heaping sandwiches on fresh rye bread, bagels and schmear, and potato latkes. Here in Denver, you’ve got to dig a little bit to find those gems. So when I saw a 5-star listing for Latke Love during my recent Yelp perusing, I thought, “Oy vey! I’ll schlep my goy boyfriend over there tomorrow morning for a nosh.” 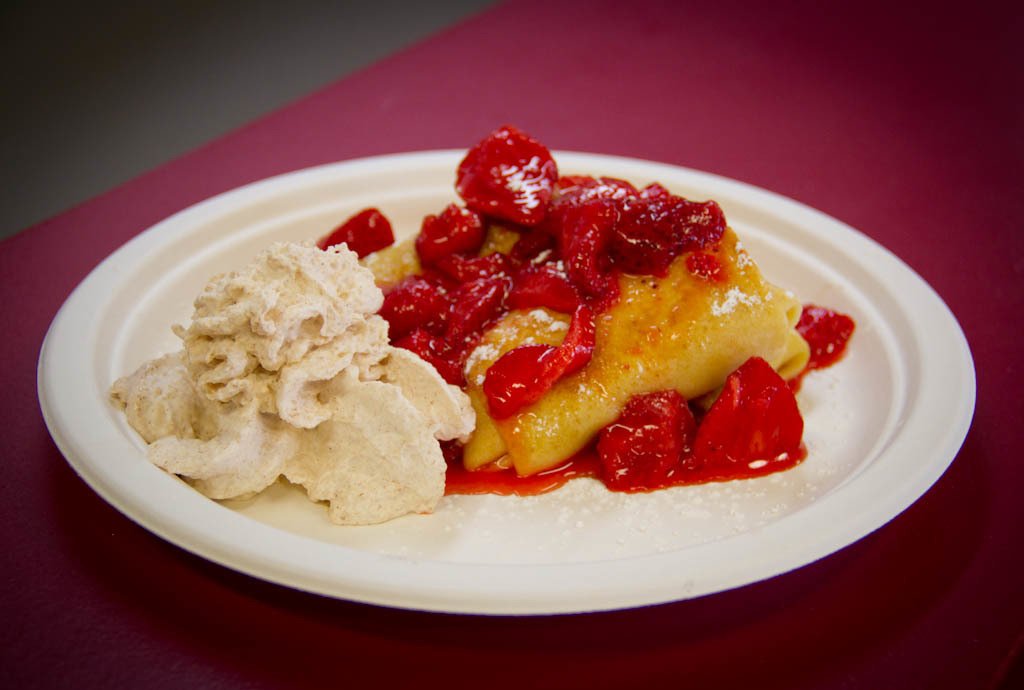 Their menu is small, but has a broad spectrum of variety and a smattering of hilarious Yiddish words. I listened again and again as each new customer who walked through the door received a friendly and informative explanation of various items from the owners- a shtick that made you feel like mishpocheh.

The whole concept of the latke business came about originally from catering gigs, serving mini potato pancakes as finger foods topped with caviar and other delicacies. Typically, potato latkes are served with apple sauce or sour cream. But the crew at Latke Love has taken that traditional concept and expanded it exponentially, throwing together “toppings” that turn plain potato pancakes into delectable and filling meals, appropriate for breakfast or lunch.

Each of their dishes revolve around a serving of four petite potato latkes (bigger than a silver dollar, but smaller than a pool ball) served in a (compostable!) bowl with toppings that ranged from savory brisket, melt-in-your-mouth pulled pork, wild caught smoked salmon, super spicy chili, sweet and chunky applesauce, or corned beef hash with a fried egg. They also offer blintzes (like a Jewish crepe, filled with mascarpone cheese and topped with fruit and cinnamon whipped cream) and knishes (an Eastern European street food, essentially mashed potatoes wrapped in pastry dough and topped with crispy onions). 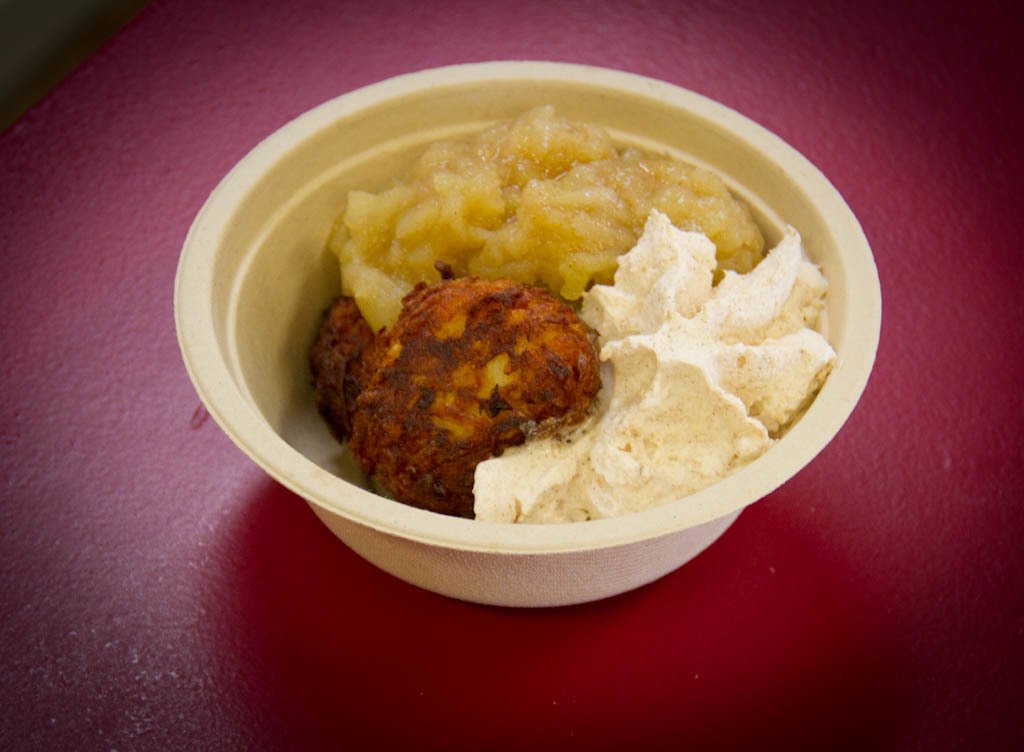 Plus, they’ve got fresh squeezed orange juice and tasty coffee. Hailing from Wisconsin, the owners also carry Sprecher soda, which come in a wide array of flavors and uses all natural raw honey.

At first, I fell for the “Meshuggah,” which is half of the “Rabbi, I’m Confused” and half of the “Baleboostah.” Allow me to translate: meshuggah means crazy in Yiddish. The “Rabbi, I’m Confused” consists of slow cooked pulled pork, Carolina BBQ sauce, and pickled onion. Now, baleboostah means a good homemaker or housewife in Yiddish. The “Baleboostah” consists of braised brisket, roasted carrots, and Guinness gravy. Mix all of this together and you’ve got latkes smothered by a heaping portion of tender barbecued red meat. Hardly Kosher, wholly delicious.

But then there was “The Manhattan,” wild caught smoked salmon topped with dill cream, red onion, and capers. This one was the winner in my book. The texture of the fish complemented the crispy golden potato pancakes, while the dill cream and capers provided a hint of salt in each bite.

The owners “like to think that they’re the only latke restaurant in the world.” I am fairly sure that they aren’t, but they may be the only ones who serve up latkes with such style, character, and flavor. 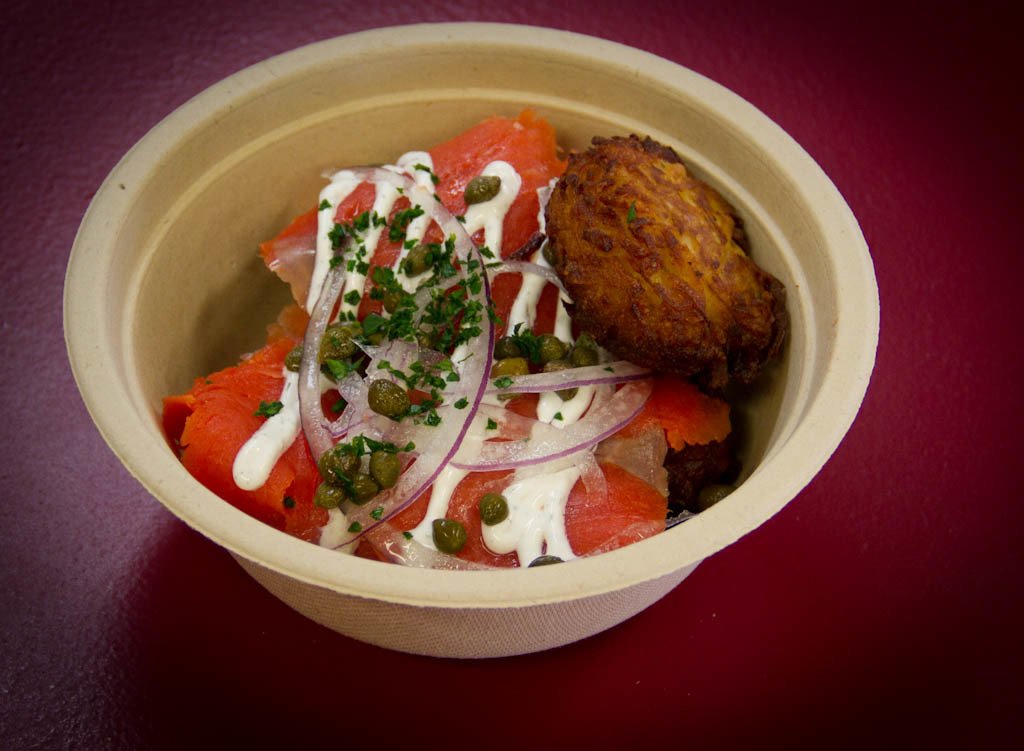 Denver A-List has already voted Latke Love “Best Comfort Food,” even though they’ve only been opened for about eleven months.

Latke Love’s owners got their start on food trucks and doing catering. They still do catering, however they’ve left their mobile food service days behind them. They were ready to settle down in a home base with a kitchen the wasn’t bound within four wheels. So when Cake Crumbs Bakery offered them the space (they share a kitchen), they jumped at the opportunity. Latke Love only has several tables inside, but their patio space (which was covered in snow when I visited) appeared to be very accommodating.

As far as the catering is concerned, they claimed, “If we don’t know how to make it, we’ll learn.”

But if it’s one thing they do know, it’s latkes.

All Photos by Crystal Rhea.