Dubstep Duo Resistance Catches Up With 303

The London-based DJ duo known as Resistance haven’t been making music for long under this new moniker, but they already have high hopes for their emerging project. Drawing on influences as varied as metal, house, electro, and dubstep, these guys promise a lot of diversity on their forthcoming EP. A few days ago, I spoke with them about the new release, their influences, and their plans for the future.

303: How long have the two of you been making music together, and how did you get started?

Resistance: We’ve known each other for around seven or eight years and [we’ve] both been making music individually under other aliases. We’d been talking about working together on a project for some time and finally got round to it in around April last year. We wanted the project to be in totally new genre and style from what we were used to, but still keep all the punch that we liked from dance music. The result is this gnarly, bassy, tear-out Electro sound. 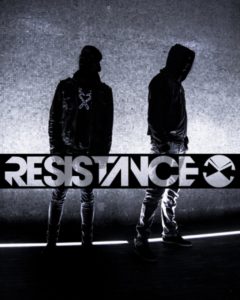 303: What are your plans for the future? Anything exciting in the works?

We’re just working up to our debut release on Never Say Die [Records] called The Beginning EP. This features three tracks from us: “The Beginning,” “Hands Up” and “Danger,” as well as a banger of a remix from Bar 9. From there, you can expect another EP, probably on sister label — No Tomorrow [Records] — as well as us getting out there on the road more for DJ shows!

303: How would you all describe your sound, and what are some major influences? What do you hope that listeners get from your music?

Gnarly, bassy Electro to make you screw up your face! We take our influences from the wide spectrum of dance music/EDM, whatever you want to call it, as well as a heritage in rock and metal. When we were looking at what we liked when putting the Resistance ‘sound’ together, various names sprang up like Chemical Brothers, The Prodigy and artists like Far Too Loud. I think our sound is [hopefully] taking its own path now, though.

303: What do you think of the current Dubstep/electronic scene in the US and the UK? How do you all fit into that scene?

We just make what we like, which at the moment is focused quite a lot around this bassy electro sound.

Nothing in the diary at the moment, as it’s just the beginning [excuse the pun!] of the Resistance project … But, if you guys want to book us to come and play, then we’ll be there!

303: What is the most fun show you have played so far, and what was it like? Do you all prefer playing in small clubs, or big venues? Have you done any D.I.Y. shows in warehouses?

Quite often the best shows are the small clubs with sweat dripping off the ceiling! The arena shows can feel a little like you’re detached from the crowd. It is good to see a sea of hands in the air though!

303: What is your following like in England? What types of acts have you shared the stage with?

Its early days for us as Resistance with this being our debut on Never Say Die. Things are growing though and the response to the EP has been great so far! We’re having fun with the project and are just enjoying making the tunes.

303: Who are some of your favorite electronic artists right now? Who are you playing out? Who do you hope to play with?

We like what Let’s Be Friends are doing right now. Their arrangements are crazy! Knife Party and Far Too Loud, obviously, as technically, they are production beasts. We’ve also been playing quite a few of Dyro’s tunes recently too, which work well in the club.

303: Do either of you have any previous music experience prior to doing this? If so, what were you involved in?

Ummmm yes … We’re not telling just yet though. We’d much rather that it was about the here and now … The music! We are Resistance … Who we are is not important!

303: What do you all listen to outside of the dubstep/EDM scene?

We both grew up on a diet of grunge and metal and both picked up real instruments in bands before we ever took to producing electronically. As a producer, I think it’s healthy to be open to influences outside your chosen genre … Good music is good music regardless of genre.

The new Resistance EP, The Beginning, will be available February 24th. For more info on the band, go here: