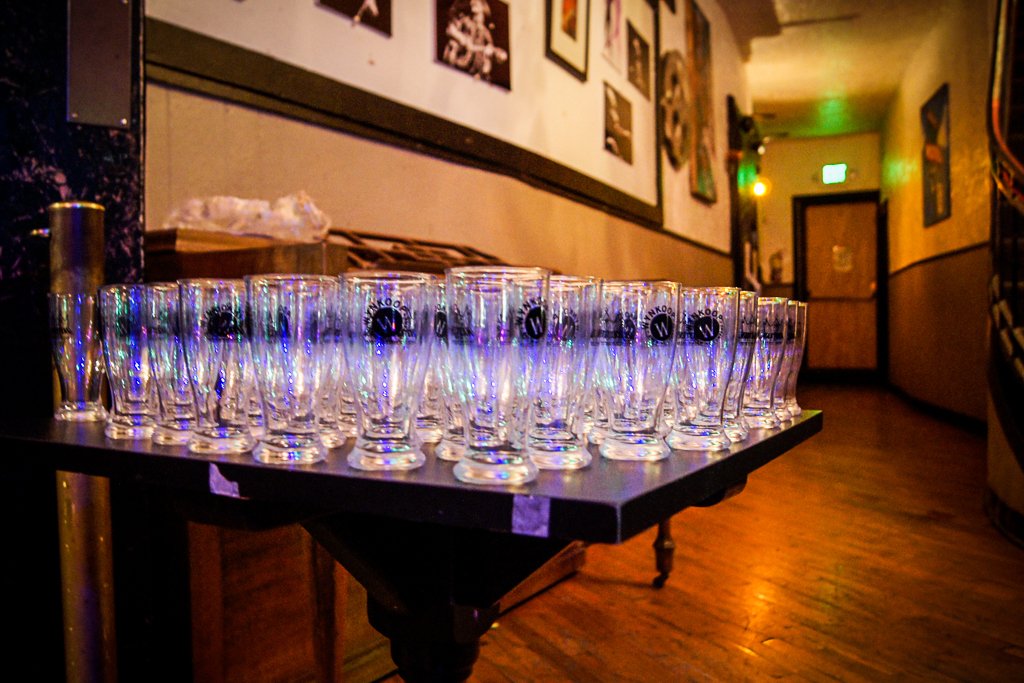 What:  Masters of the Brewniverse

Cons:  The hangover the next morning.

Presented by the Wynkoop Brewing Company, “The Masters of the Brewniverse” was Colorado’s first ever “Brewing Pageant,” organized to raise money for the Mile High United Way.  But when I arrived at the start, nobody seemed to know exactly what the night would entail.  “No one knows how to run a Brewing Pageant,” Casey Berry, one of the organizers, explained to me before the doors opened to the public.  There was a schedule of events, but it was treated more as a set of guidelines than a hard-and-fast batttle plan.

The seeming madness of this event (where the organizers and participants opened the evening by shotgunning 12 ounces of 9% IPA) belies just how well organized the event really was.  The atmosphere was a wonderful marriage of a rock concert, a biergarten, and comic con.  Guests in business casual attire mingled with brewers in lederhosen, bartenders dressed as cows, and vikings with intricately styled beards and chest hair.

“This is going to be ridiculous, no matter what happens.” –Andy Brown, MC for the night

As the night continued, the pageant contestants’ love of their own product lead to increasingly hilarious demonstrations.  This started with a fashion show, moved on to an interview segment, then ended with a talent show.  These included: 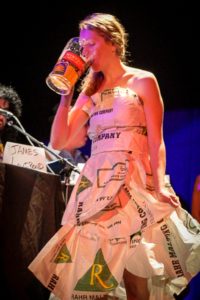 “Who doesn’t like seeing a girl chug beer in a dress made of malt bags?” –Andy Brown

But in an event featuring samples from some of Colorado’s best breweries, the focus of the event had to be the beer.  I went into the event planning to give a rundown of all the brews that had been brought, but I quickly discovered that sampling every beer would have left me with no memory of the event whatsoever.  So I have to apologize to any of the brewers in attendance that I missed–sometimes responsibility has its downsides.

“This was a great excuse to wear a tutu!”

This was my opening beer of the night, and it really set the bar high.  With a floral aroma accompanied by hints of citrus, this IPA accomplishes the difficult feat of being massively bitter and refreshing.  It also brought a slightly cloudy, roasty yellow-red color that surprised me.  I’m not as fond of IPAs as a lot of craft brew fans, but this one definitely gets my stamp of approval.  It’s got big enough flavor to be interesting, but not so big that it kicks your tongue out of your head.

With the telltale aroma of a Belgian, this beer brought the boldest flavor of everything I sampled at the pageant.  It has a slightly creamy mouthfeel that holds the cold very well.  I detected some nice alcohol burn that was tempered by the sweetness of the malt.  It left a beautiful trail of lace down to a thick hump of foam at the bottom of my tasting glass, which also gave it the best head retention.  If you’ve never ventured into Belgian beer territory, this would be a good place to start. 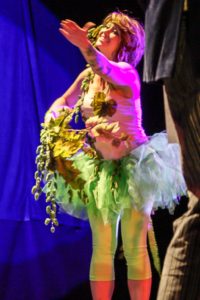 The Hop Fairy calls out to the crowd.

I’m suspicious of flavored beers, as many tend to be somewhat caustic and unpalatable.  This beer however, absolutely delivers both as a beer and as a chai.  With a dark-on-dark color and a chocolate head that bears the unmistakable aroma of chai, this beer has the foretaste of a well-made stout but the backtaste of real no-fooling chai tea.  “I don’t even know what’s in our spice blend, I just take it from our kitchen staff,” said Y&Y’s head brewer Adam Draeger.  Whatever they’re using, it’s definitely working as this is a great beverage for both beer and chai fans.

I won’t lie, by the time I got to Renegade’s stall I had already hit that magical point in a night of drinking where most everything tastes great.  That being said, I don’t think it takes away from from this “Afternoon Ale,” which has a crisp, clean taste with just enough hops bitterness to make it interesting without giving mouthnumb.  “It’s a beer for after a hard day’s work,” I was told as I was handed my beer.  With a nice head, excellent lacing, neutral aroma, and cold, drinkable mouthfeel, I could definitely see drinking this after too much time in the sun. 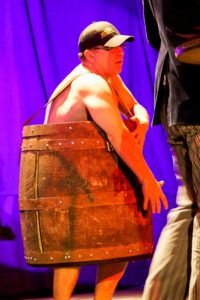 Fashion in a Brewing Pageant

Since moving to Colorado, I’ve opened my heart to lagers and go out of my way to try them whenever I get the opportunity.  This lead me to sampling this Kölsch when I probably should’ve called it a night.  But I regret nothing, as this is an excellent addition to the lager scene.  It’s crisp, refreshing, nicely bitter, and left some very pretty lacing.  It was yellow and appeared cloudy, but I can’t really trust the dance club lighting, so take that with a grain of salt.  An excellent session beer, this is going to work its way into my regular drinking rotation.

“I think of this as a great opportunity to have fun with your fellow brewers.”

It’s rare that a group of professionals come together for an event with fun as the main focus, but the pageant turned into a night of raucous fun that was an absolute blast.  The beers were good enough that they could’ve been served in a quiet room with harsh lighting and I still would have enjoyed myself, but Colorado’s Brewers aren’t about to let that happen.  Beer is about having fun, and the folks who organized Masters of the Brewniverse didn’t disappoint.

All photos by Rhonda DePalma