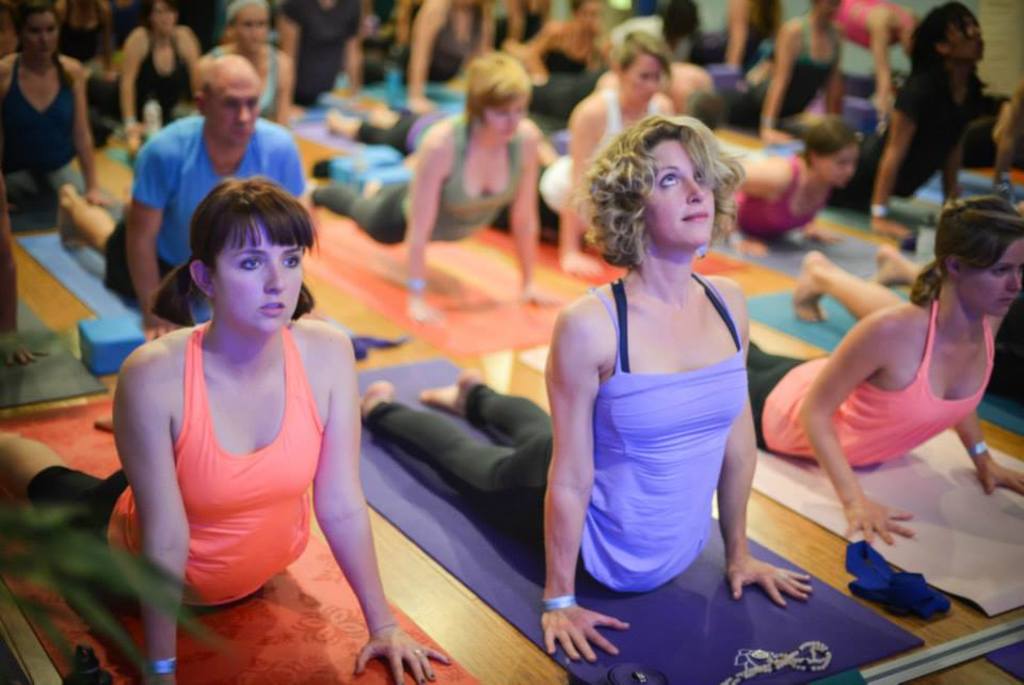 Finding the motivation to practice yoga alone isn’t easy for me. I need a cheerleader. I want to be surrounded by others who are testing their limits like I am. It makes grinning and bearing it more endurable. I feel supported. The occasional negative voice in my head gets drowned out by the instructor’s. Dancing is my other workout of choice, because it’s nearly impossible to feel pain when there’s a party involved.

Friday Night Yoga Club is the hottest winter yoga party in Colorado. One hundred eight people showed up for the January 3 launch of its 2014 season at the Hilltop location of Kindness (inside Thrive Integrated Health). It was a capacity crowd that required the studio to metamorphasize into a giant “L” shape. Traffic flow amongst the myriad vendors in the lobby was a smidgen slow, but it was a small price to pay to practice with the larger Denver community. Plus, the brand ambassadors that frequent FNYC are always geared to suit local yogi tastes. Yogadownload.com, Sequana Natural Oils, Kolat, Vibrant Earth Juice, Sol Shine, Higher Brain Living, Denver Chant Fest, Feed Your Soul Yoga, Doterro Oils and even Whole Foods were represented.

Open Sky Events’ Erik Vienneau opened by thanking the event’s numerous sponsors. Whole Foods’ involvement was touted as testament to FNYC’s positive growth and continued impact. Vienneau then handed off the mic to a man in a wheelchair, Denver Adaptive Yoga’s Tom Hinijos. Hinijos explained that Adaptive Yoga caters to individuals with physical disabilities, much like himself. He seemed a little nervous, but he’d have been hard-pressed to find a more supportive audience. We were all ears.

Patrick Harrington split guide duties with Ryan Hader and his chant band. Harrington deftly jostled any straight faces in the room with the admission that, prior to arrival, he’d had trouble getting TLC’s “No Scrubs” out of his head. Peppering his brain food with humor is a specialty of Harrington’s. The Kindness Jedi then likened us to pioneers on the precipice of a new frontier—inner space. Pointing out that some of us were using grandpa’s old neckties instead of straps infused the mood with more lightness at pivotal moments. Hader and company handled the closing Oms, along with a moving call-and-response musical finale. As is customary, yogis imbibed, nourished, shopped and socialized afterward.