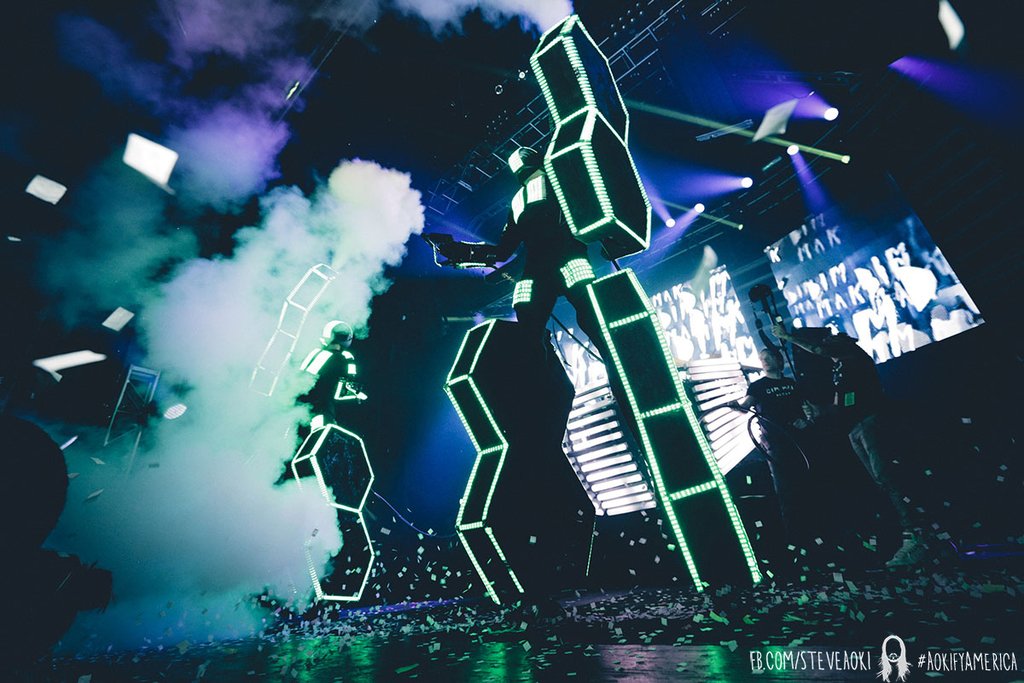 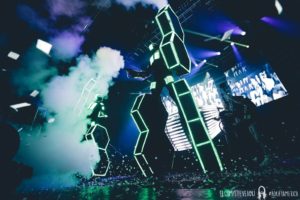 Whatever you think of Steve Aoki’s music, there are definitely less entertaining DJs to watch. Aoki understands the importance of putting on a show. That’s why he crowd surfs on an inflatable raft and throws cakes in fans’ faces. Even a good show can be upgraded, though. Enter Kryoman. The height-enhanced, CO2-packing robot has been a fixture in the EDM scene for years. Carl Cox, David Guetta, Afrojack, Tiesto, The Black-Eyed Peas and Nicki Minaj have all hired Kryoman designer/performer Andy Moore to infuse their concerts with robot life. Aoki was certainly no stranger to the man/machine’s impact on an audience. The Japanese-American DJ was quick to react when Moore teased his team’s new Hex 3D Robot design, booking Kryoman and company for the current Aokify America Tour. The ten-foot cyborgs join Aoki onstage for a freezing gas cloud firing match. See for yourself at the Ogden. And feel free to peruse our interview below.

I was given a cassette tape by my uncle of The Prodigy Experience.

When you were little, what did you want do when you got big?

How did you get your performance art start?

I was trained by local people in the scene when I was 15 and then have been training nonstop ever since.

How did the idea for Kryoman first come to you?

It came to me in a dream.

When was the first time you worked with Steve Aoki?

A year ago in a Life in Color show, we shared the stage for a brief moment and everything changed.

Can you tell us more about the LED Headdress, The Arc, The Claws, and Steve’s show jacket?

I had some crazy ideas. Steve loved them. I built them, and he rocks them.

When is the release of your remix of Paris Hilton ft. Little Wayne?

Possibly a single release or it might go on Paris’s upcoming album. I guess we will see.

Can you tell us more about your upcoming tour with Akon? Will there be any shows in the US?

My collaborations with Akon are ongoing. We will proceed musically first and then a tour in 2014.

What’s the craziest thing that has happened while on tour or backstage on even on stage?

A 150 foot LED screen fell crushing three Mexican workers in the Azteca Stadium in Mexico when I was on tour with David Guetta. Within four hours, a brand new screen was up and the workers were in recovery. Props to the Mexican workforce.

How did you conceive the new Hex 3D Robot?

A triple espresso and PowerPoint.

What does the horizon hold for Kryoman?

Full live show and experience. We are already doing it, but it is only going to get bigger and better.

Kryoman’s latest collaboration with Stellar is available for free download at Soundcloud.com/KryomanOfficial.