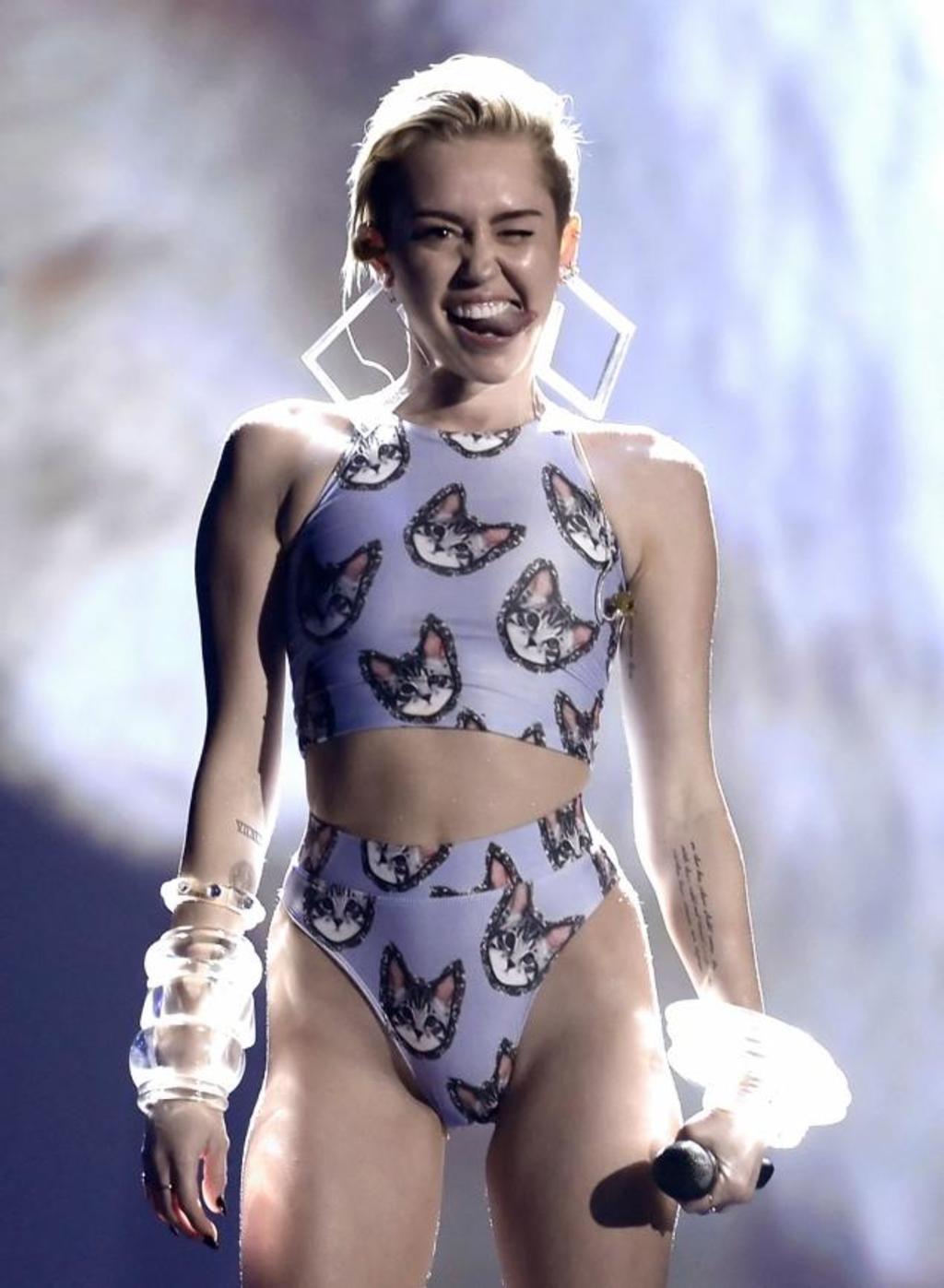 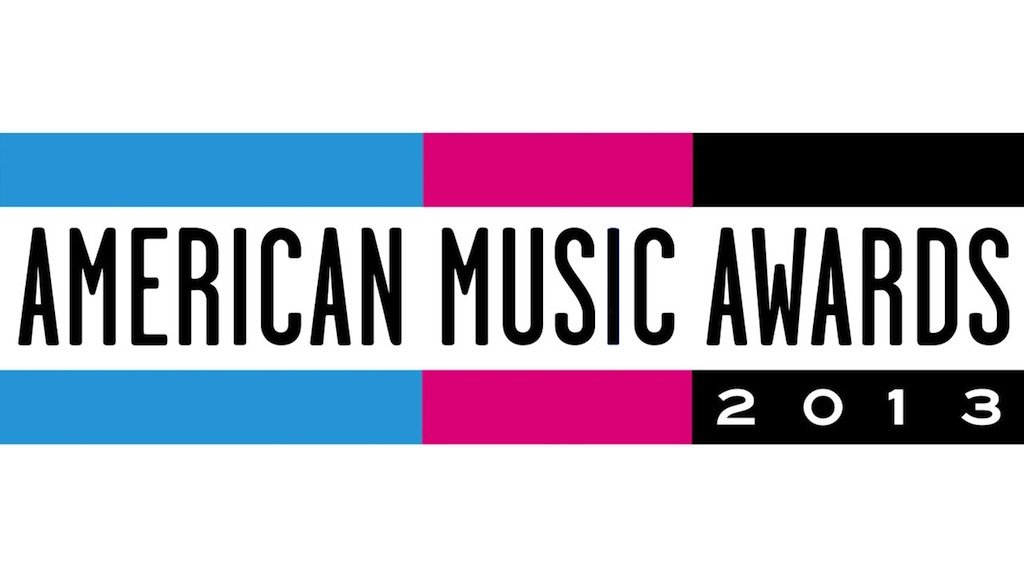 If you were too busy watching the football game last night to check out one of the biggest music award shows in the world, you missed out. Not only did you miss some of the best performances from artists like Katy Perry and Rihanna, you missed a frenzy of fashion on the red carpet and on the Nokia Theatre stage in L.A.

Well don’t worry, because I watched the show and have here some of my favorite ensembles and some of the worst I’ve seen in quite some time. 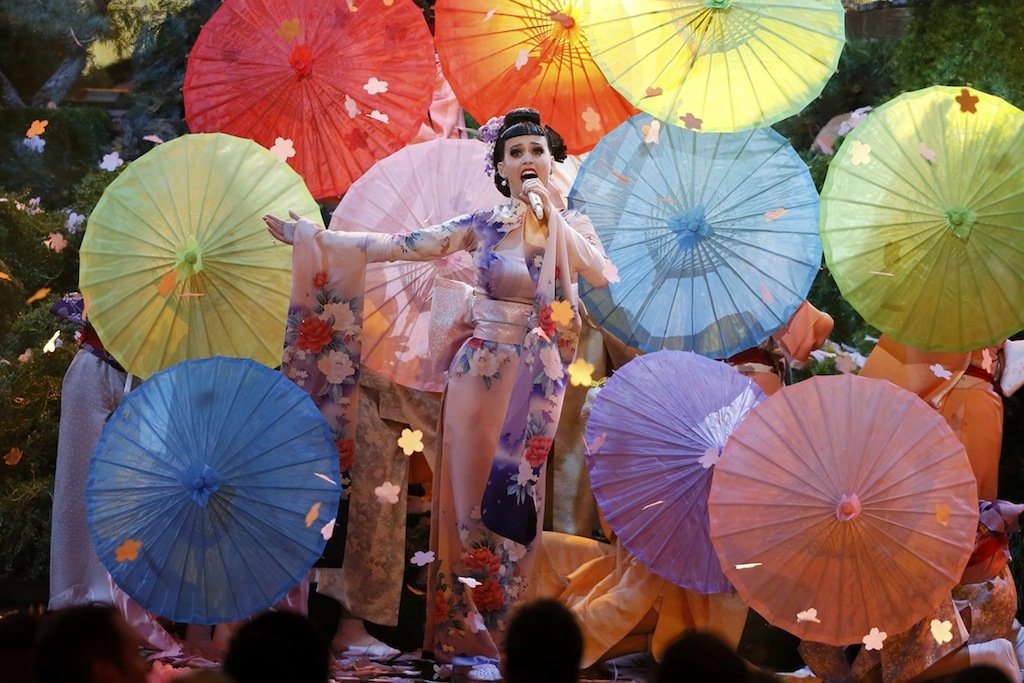 If you’re wondering why Katy Perry’s geisha look made my best dressed list, here’s a little tip: Katy Perry is weird. She’s never going to wear something boring or with lack of color while performing at an award’s show. I had to think about her look before making a decision, but yes – she’s a best-dressed nominee. The song was performed beautifully, I couldn’t take my eyes off the stage, and the outfit was so her: perky, colorful, powerful and creative. 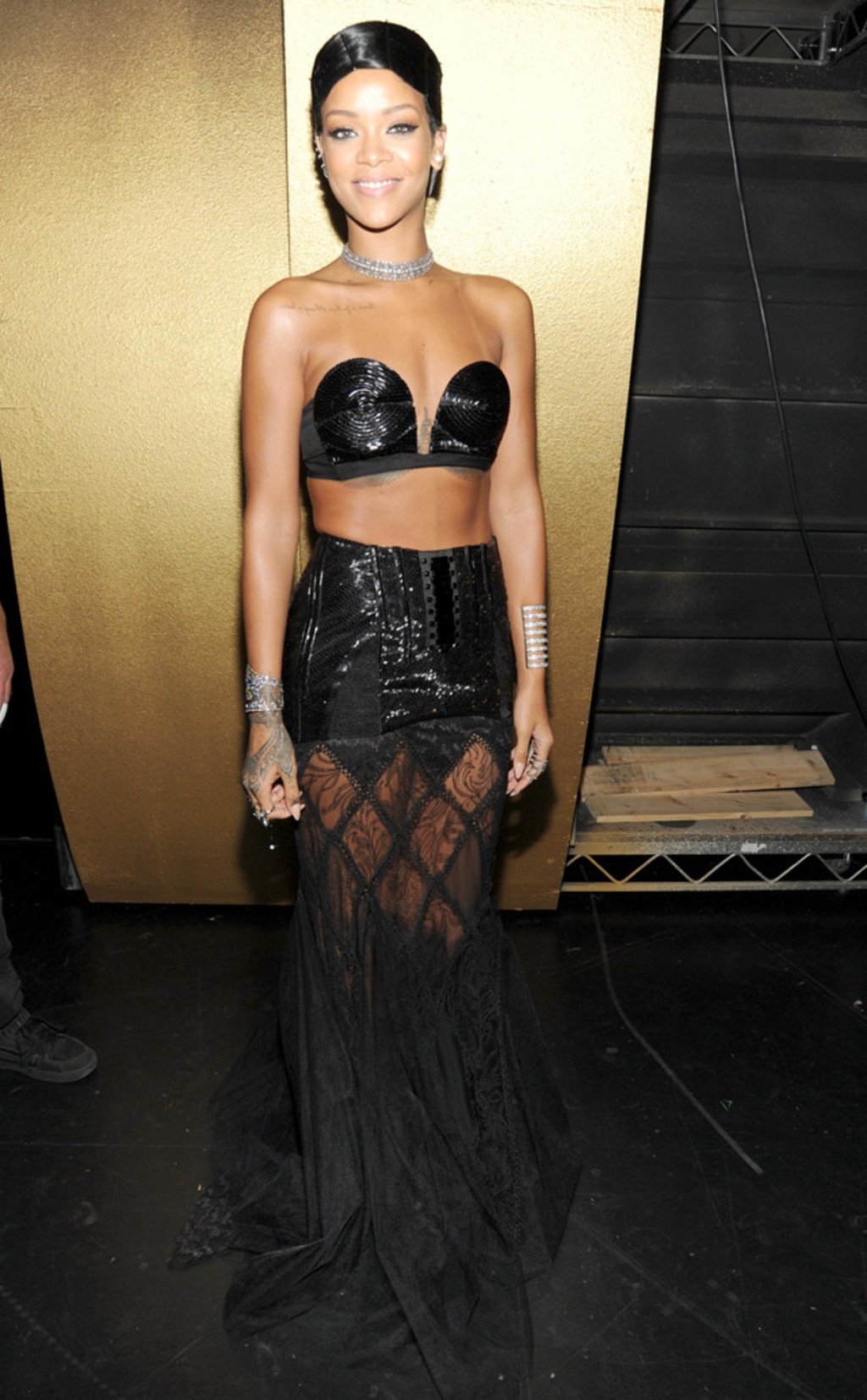 There’s nothing I love more than black, lace and a crop top/bra top. Since I can’t wear this in my everyday life, I have to give credit to those who wear it on the red carpet. Rihanna carries this look perfectly. From her glowing skin to her sleeked-back hair, I gasped a little when I saw her in this. Her performance outfit was simple and classic, but she let loose with this outfit and I’m loving every inch of it. 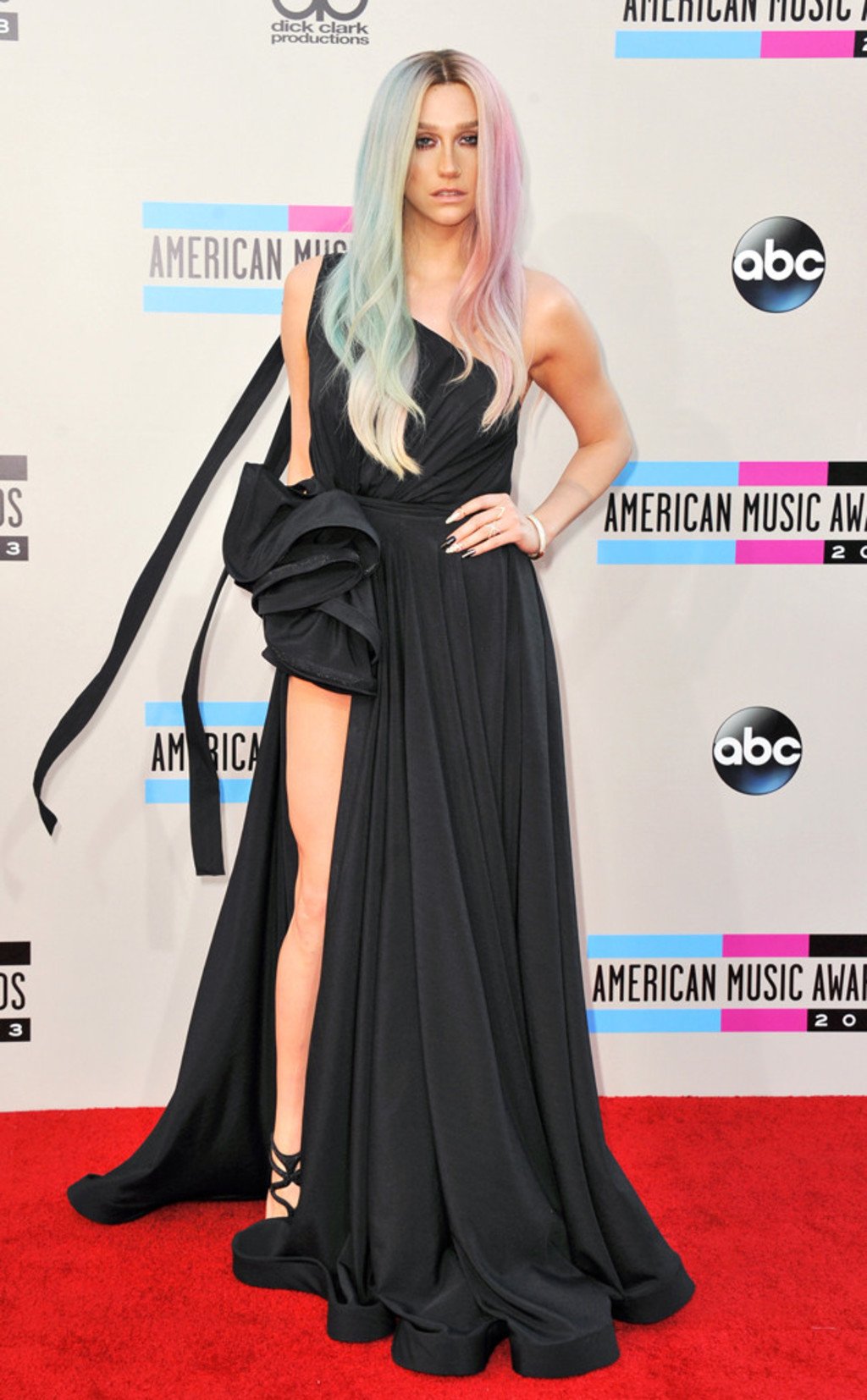 E! Online might call this one of the AMA’s worst looks, but I disagree. When it comes to Ke$sha, her style has grown from when she started out years ago. She used to wear cut-off denim shorts, skater shoes and crop tops, but she’s matured in the music industry and has become – I think – a style icon. Sure, she has half pink and half blue hair. But I love this gown. She looks classy, while maintaining her ‘crazy girl’ niche. 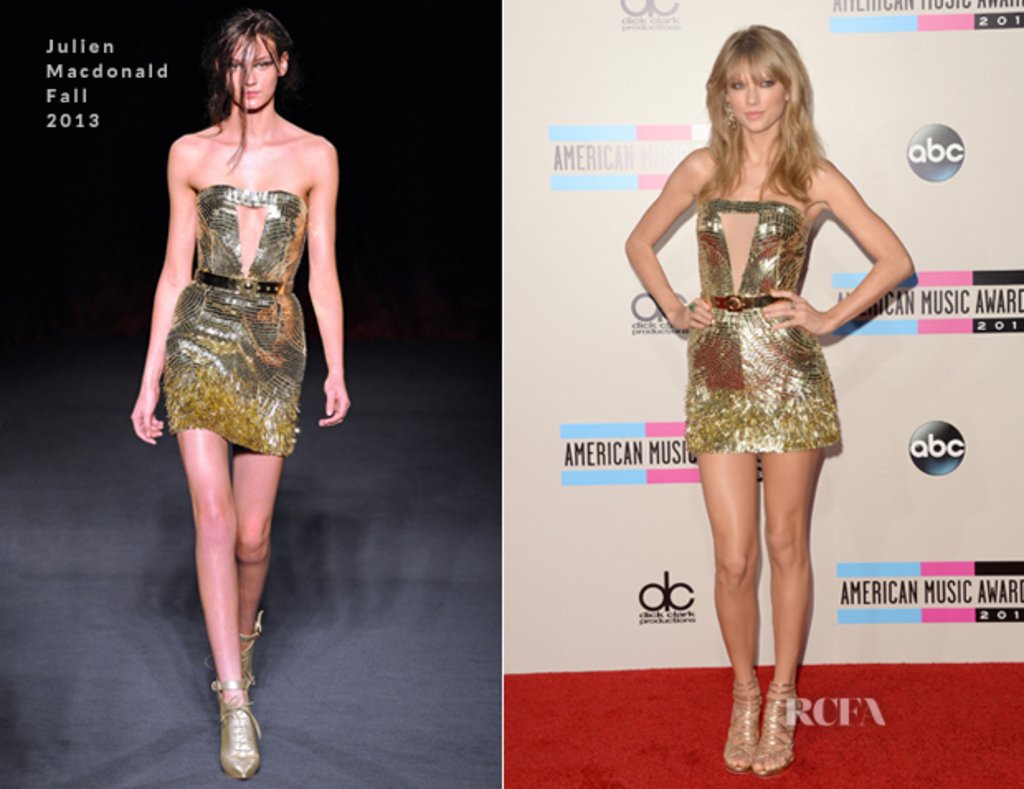 I like how Taylor Swift is trying to break out of her cookie-cutter pop/country role in society, but I think she missed the mark here. I love this Julien Macdonald dress, but when you look at it on the runway and then compare it to what she wore last night, I was a little disappointed. Don’t get me wrong – she looks great, I love her hair, and this makes her tall and lanky body look womanly, but I hate how she covers up her cleavage. It’s like she’s saying, “I’m sexy, but I’m scared to be too sexy.” It would have been better if she took out that ugly nude cleavage cover-up or if she just wore something else.

First of all, I want to say that this outfit is so much better than Miley’s VMA performance outfit. If you don’t remember it, check it out HERE. It was basically like she was wearing giant (although tiny) bandaids around her lady parts, and had on the world’s ugliest tennis shoes. It was horrible. I also want to add that if this was a bathing suit, I would totally consider trying it on only to prove that it would make more sense as bathers instead of a an outfit for an on-stage performance. My last positive thing about this is that I genuinely love cats. So if I was just considering the above connotations, this would be a winning look. But look at that bracelet… And those earrings… Clearly Miley doesn’t know how to accessorize, but also, she’s a now 21-year-old trapped inside of the mind of a 5-year-old. Plus, I can pretty much see your vagina. There you go. 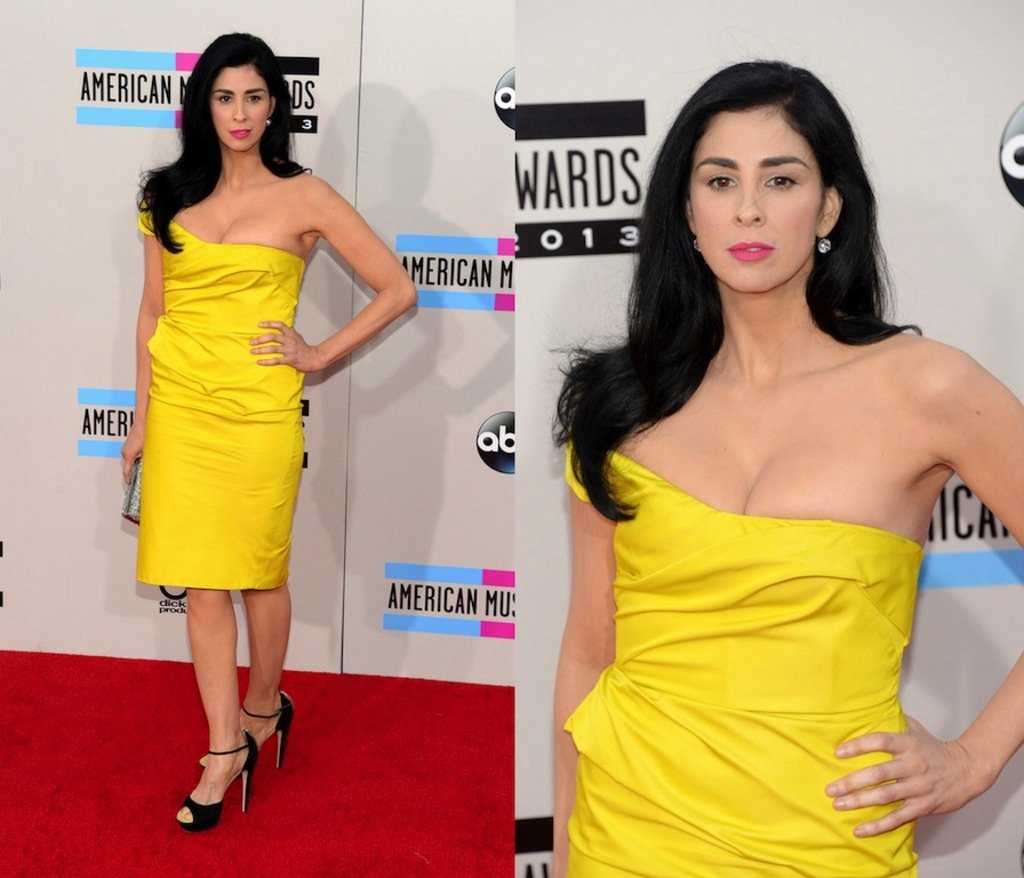 Why was actor/comedian Sarah Silverman at the AMAs, you ask? I might not be able to answer that, but I’ll tell you one thing: This was definitely not a good look for her. I like her hair, her lips and how she’s pretending to be proper in this photo, but that’s about it. It looks like she ruined her dress that she was originally going to wear and instead wrapped this bright yellow sheet around her and gave it a strap. It isn’t doing anything for her body, those shoes are hideous, and look at the way she’s standing. If you ask me, this is sadly a laughable look for one of my favorite female comedians. There’s always next year…to show up at a music award’s show for no reason.