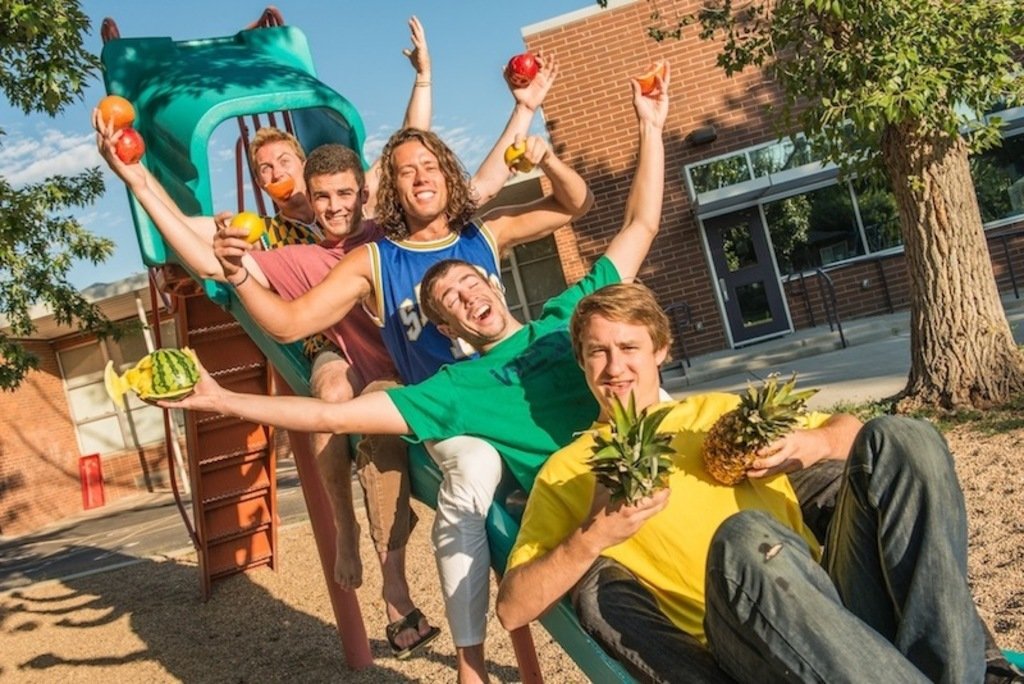 It’s been a hell of a few years for the members of Na’an Stop (pronounced “non-stop”), one of the fastest rising bands in the Colorado music scene. After meeting as freshman at the University of Colorado Boulder, Caton Smith (bass, vocals, guitar), Tom Huber (guitar, vocals, bass), and Joe Pesa (drums) began jamming together. In 2011, they picked up David Halvorson (trumpet, vocals) and Patrick Mulholland (trombone, keyboard, vocals), and officially formed Na’an Stop. 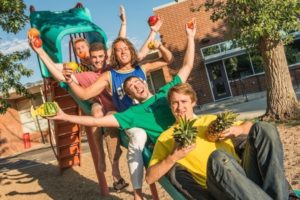 The guys started off playing at local house parties and bars in Boulder, wherever and whenever they could. Two years later, Na’an Stop’s EP, It’s All In The Cheese, is on iTunes, and this Saturday, Nov. 16, they are set to open for the internationally known reggae group, SOJA, in a sold-out show at the Fox Theatre in Boulder.

Na’an Stop’s unique sound infuses a solid foundation of a classic reggae with hip-hop and dub influences, incorporating hints of rock and roll. Since 2011, Na’an Stop has played across Colorado and has come to represent the Boulder music scene, as well as the Colorado reggae sound.

We had the chance to talk with the guys of Na’an Stop about their sound, their progression, and how stoked they are to open for SOJA, one of their main musical influences, in a sold-out show this Saturday.

303 Magazine: First off, how do five college students in Boulder start a reggae band?

Caton: I’ve basically just always only listened to reggae. I’m from Hawaii, so that’s what I listened to growing up. It’s just the default music that I always grew up with and always liked.

So is that how you would describe your sound, as reggae?

Tom: I think it’s just a blend of whatever we want to hear. We hear a lot of other bands all of the time and we pull a lot of influences from that. One song could be kind of Hawaiian-reggae and another could be more like rock with a hip-hop influence.

Patrick: I think a huge thing for our group is that nobody feels like they are compromising their genre, and while people have their varying genres that characterize them, all those things can be put into a group and it still sounds like this style of music… like California rock-reggae.

Explain how things evolved from playing house parties to booking sold-out shows and releasing an EP on iTunes?

Tom: A lot of it was meeting new people, and just creating relationships that just benefitted us in the long run.

Caton: Another thing is, we realized that there weren’t many other reggae bands in the scene up here, so when larger acts were coming through, we were getting shots to open up for them. Seeing bigger and better acts in front of us, just having the door open to play on the same stage as them, just kept moving us forward.

Patrick: I think something that separated us is that we didn’t draw the traditional boundaries of what kind of shows we’d want to play. Because we’ve been willing to have that, it’s made us be exposed to a way different type of fan base than we would be otherwise. We have different types of fans now. We’re finally starting to see some people who our music is impacting in a positive way. That’s what I really want to do it for, in a deeper kind of way.

Patrick: I’m really interested to see how it is because the Fox is definitely like, our spot, that when we go to it’s so many people that we know. And now, we’re playing at our spot, but for not just our crowd. So it’s a pretty cool switch.

Patrick: Actually, where we were first practicing together regularly was on the corner of 12th and College, where all [the Fox] tour buses park. Within weeks of when we first starting jamming, SOJA came through with a band called Mambo Sauce. We knew that the tour bus was there so we started jamming with the window open…

Caton: We were like looking out the window, waiting for one of them to come off the tour bus. [laughs]

Patrick: And then the openers, Mambo Sauce, came up and wanted to jam with us. So there’s like 10 people packed in this tiny room and we’re like, “You guys are opening for SOJA, oh my God!” And now it’s full circle, because we’re opening for SOJA at the same spot.

Dave: Wow, I didn’t even realize that. I never made that connection. That’s fucking awesome. That’s so cool.

What do you do when you’re not “working” towards the band?

Caton: Outside the band, we all love to be outdoors. Snowboarding, all the time. That’s a huge reason I came to school out here.

Dave: We put a lot of energy into the band though, for sure. It fluctuates. Right now we’ve been practicing a lot and really honing it down. I think this is the trajectory we’re gonna stay on and just keep really grinding. We definitely all take it really seriously, but we have fun with it.

Pat: In general, everyone doesn’t take things too seriously. It’s just hanging out and having a good time, and that vibe keeps going and trickles into the rest of our lives.

What are your biggest hopes for the future of Na’an Stop?

Patrick: We really, really want to put out either a longer EP or an album. We have so much original material that’s not recorded, and it keeps growing all the time. We’re really ready to do that, once the time is right.

So… how are you guys going to celebrate after opening a sold-out show for SOJA at the Fox?

—If you don’t have tickets to the show this Saturday but want to see Na’an Stop play, you can catch them opening for the Magic Beans on Friday, Nov. 22, at Cervantes’ Masterpiece Ballroom. Tickets here.