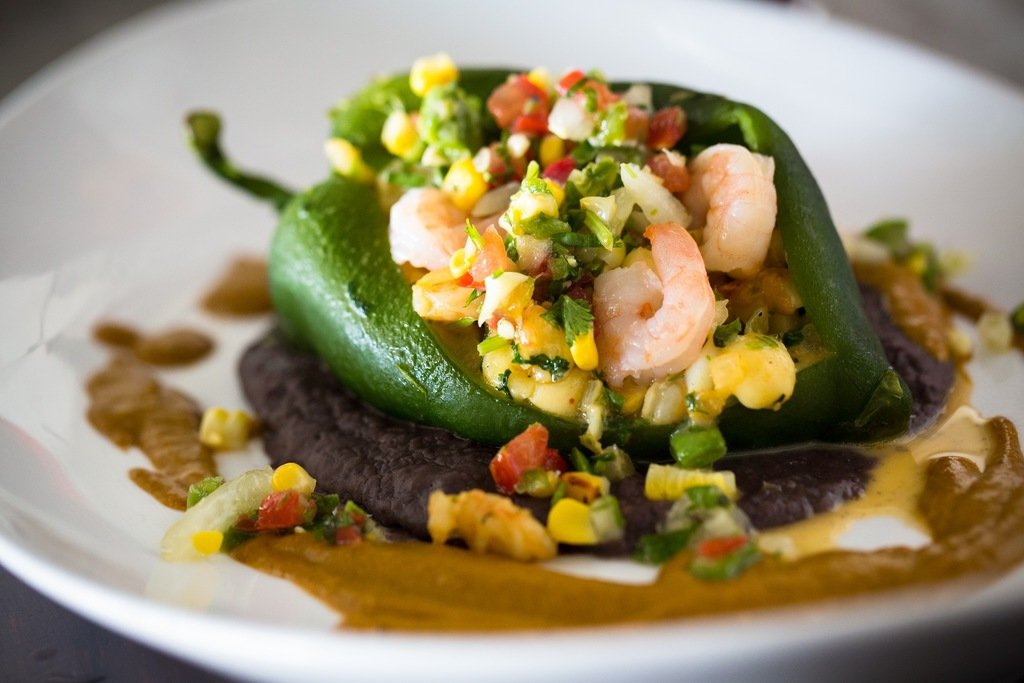 Where: Larimer Square on the corner of 14th and Larimer

While most Mexican restaurants keep the same menu throughout the year, Chef Richard Sandoval and his culinary team are breaking the mold at Tamayo. From October to December, the restaurant is hosting its First Annual Chile Relleno Festival. Here they will give the traditional dish a modern makeover. The array of bold choices of flavor and new fall cocktail list make Tamayo a great date spot during the fall season.

I was really excited to see an updated fall cocktail list at Tamayo, since most Mexican places stick to the same flavored margaritas. Tamayo had not one, but two fall cocktails to choose from on their Chile Relleno Festival menu. I went with the Apple Pie Margarita (because who could pass that up on a chilly October day?) and it was delicious. Made with Tequila Blanco, fresh apple puree, apple schnapps and their house made sour mix and lined with a cinnamon sugar rim; the Apple Pie Margarita was the perfect blend of seasonal flavors and traditional roots.

Before starting off on our Chile Relleno journey, we couldn’t pass up their Bacon Guacamole. It was prepared with chicarrón, picked chili, and cotija cheese and was packed with sharp flavor. The dish had my boyfriend and I saying, “Why didn’t we think of this?” If you’re not a bacon fan (which is ludicrous, but I’ll let it slide), they also have a Spicy Crab Guacamole, Tuna Tartare Guacamole, and a traditional blend.

Tamayo’s Chile Relleno Festival menu features many seasonal ingredients and many types of peppers. Lucky for indecisive people like myself, the menu offers a Mini Relleno Tasting for the table so patrons can sample each type of relleno that Tamayo offers in a small, bite-sized Fresno Chile pepper. If you find one that you really like, there’s the option to order it as an entrée. In this case, the filling is stuffed into a larger pepper that complements the dish and filling. Each chile relleno was so tasty; it was hard to pick a favorite. There was the Chile Seafood Relleno, stuffed with shrimp, calamari, scallops, Gouda cheese and a black bean puree, topped with a chile de árbol sauce. It was absolutely delicious and the seafood was not overpowering.

After much deliberation, we decided that our favorite was the Chile Picadilla Relleno. In fact, we enjoyed it so much so that we ordered it as an entrée too. The dish is two pasilla chiles stuffed with chorizo bacon pork and mashed plantain, mixed with a crema fresca sauce. The pasilla chiles were cooked perfectly and made for a crunchy shell for the savory filling.

Tamayo has it all: appetizing starters, traditional and modern entrees, and fall seasonal cocktails that are both refreshing and sweet. We had a great experience and were extremely impressed by our server’s knowledge of each dish and the ingredients that went into it. It’s clear that Chef Richard Sandoval and his team know their stuff, especially when it comes to Chile Rellenos and I hope that they continue the Chile Relleno Festival tradition in upcoming years.

And since each dish that arrived was perfectly proportioned, it’s easy to share with your date…but you may not want to!