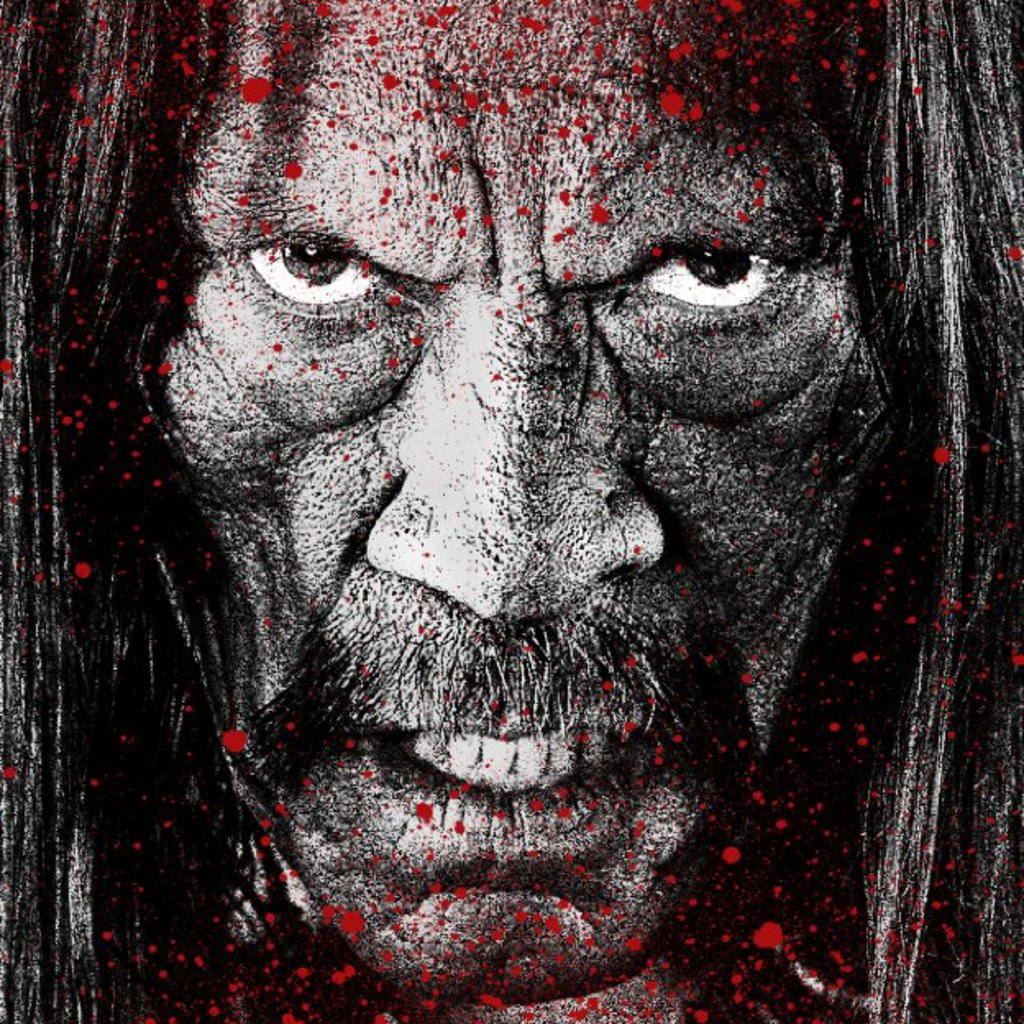 His muscular frame, thick mustache, leathery exterior and tattoos are all unmistakable. He’s a bad ass. The baddest of the bad. And not exactly someone you want to bump into down a dark alley. Noted for playing scores of criminals, villains, assassins, and antiheroes in films like Heat (1995), From Dusk Till Dawn (1997), Con Air, and Marked for Death, Danny Trejo has built a reputation not only as one of the scariest, toughest talents in all of Hollywood, but one of the most prolific.

Thanks to a longstanding partnership with second cousin, Robert Rodriguez, which began on the set of Desperado back in 1995, Trejo has successfully made the leap from supporting background character to leading action hero with the introduction of Machete Cortez, an ex-Federale with mad skills and a killer disposition.

A kinder, gentler Machete first appeared in Spy Kids (2001), but was later enhanced with a jagged edge in a faux trailer accompanying Rodriguez’s homage to 70s exploitation films called Grindhouse. Then, after years of development, Machete finally made his feature debut in 2010.

This month, Trejo reprises that role in Machete Kills. When a madman launches a deadly missile attack against Washington, D.C., U.S. President Rathcock (Carlos Estevez, aka Charlie Sheen) employs Machete to stop him. Along the way, Machete uncovers a terrorist organization led by Luther Voz (Mel Gibson), who has an even more diabolical plan.

Says Trejo, “Machete Kills makes Machete look like something you would take the kids to!”

For Trejo, the raw intensity, toughness, and fighting skills associated with many of his characters has an unrivaled authenticity. At an early age, the Echo Park native ran into plenty of trouble, spending more than a decade in and out of every state prison in California for armed robbery, gang violence, and drugs – all before he was 26.

While in the pen, he won the lightweight and welterweight boxing titles, completed a 12-step rehabilitation program, and met writer Eddie Bunker, who would later introduce him to director Andrey Konchalovskiy and ultimately, secure his first acting job on the set of Runaway Train (1985) with Jon Voight and Eric Roberts.

Says Trejo, “Everything good that has ever happened to me has happened as a direct result of helping someone else.”

An ex-convict turned actor, Danny Trejo has completely turned his life around, building an amazing career while mentoring and sharing his inspirational story on and off the screen (Celebrity Preacher). His generosity, kindness, and willingness to help others has earned him a ‘champion’ caliber reputation – one that’s as strong as the characters he plays. And equally as bad ass.

At any point in your youth, did you ever imagine becoming a movie star?

No. It was so far beyond my realm of possibility. Actors didn’t come out of San Quentin. It just happened by accident and it’s been such an amazing journey.

What motivated you to change?

When I was in Soledad State Prison, I went into the hole. Cinco de Mayo, 1968. And I got out of the hole on August 23rd, 1968. While I was there, I kind of made a deal. I remember saying, ‘God, if you’re there, it’ll be alright. And if you’re not, I’m screwed!’ I promised if I got out I would dedicate my life to helping other people.

Obviously, he heard me because I came out of there with no charges. And so, I dedicated my life to helping other people. Everything good that has ever happened to me has happened as a direct result of helping someone else.

Your first on-screen appearance in Runaway Train. How did it come about and what you remember most about it?

I was actually a drug counselor at the time and one of the kids I was with called me up at eleven o’clock at night and said, ‘hey, there’s a lot of blow here at my job; would you come down and hang out with me?’ And that’s what I do. That’s my forte. I hang out with people who want to stay clean. Now they call them sober coaches, but then, I was just doing whatever to keep clean.

So, I went down to hang out with this kid on his job and it happened to be on the set of Runaway Train with Jon Voight and Eric Roberts. While I was there, I ran into a guy that I knew in prison. A guy named Eddie Bunker, who was a writer. (If you ever want to read a great criminal novel, read Education of a Felon. It’s the best criminal novel ever written!)

So, I started training Eric Roberts how to box. And Eric, respectfully, did everything I told him to do. And when the director, Andrey Konchalovskiy, saw that, he made me the fighter and put me in the movie. The guy they had originally cast to fight Eric was a good looking guy. But it was like two real pretty guys fighting. And it didn’t look that good.

(Laughs) I’ve never been accused of being pretty! So, yeah, the fight looked really real.

Robert wrote the script for Machete back in 1993. And it emerged as a fake trailer preceding Grindhouse. How did it go from trailer to full length feature?

The fans demanded it. It was so crazy. We got swamped. First of all, the critics said it was the best thing in Grindhouse. And everybody kept asking about it. Robert said more people were asking about Machete than Sin City 2.  And when I was in England, there were people tattooing pictures of Machete on their back. Everybody just fell in love with the character.

After, I remember telling Robert, ‘Hey, we better do this movie.’ And he said, ‘The script is done. We’re doing it!’

And once you get Robert DeNiro, everyone wants to work with him. Jessica Alba, Lindsay Lohan, Michelle Rodriguez, Steven Seagal, Don Johnson, etc. Even my son was in it. He was the artist. My daughter was the machine gun toting mechanic. And my best friend Craig – he got squashed by a truck! It just came together and took on a life on its own.

What can you tell me about Machete and his mission?

Machete fights corruption on both sides of the border. He’s not fighting immigration. He’s always fighting corruption – the drug lords and the bogus politicians. And steps into situations where nobody else is doing anything about it.

What makes Robert’s style of filmmaking different from others you’ve worked with?

Part of Robert’s secret is that he comes from an editing background. He used to edit all of his own stuff. So, he knows where to cut things. There are a lot of directors that have to see what they want. And you end up doing ten or eleven takes. But Robert knows exactly what he wants up front. So, you shoot once or twice and you’re done. It’s a lot simpler to work with him than a lot of other directors because he’s got the movie cut, edited, and in the can before you even step on the set.

Now that you’ve been a leading man, do you find yourself looking for different things now that you’ve had those experiences? Are you looking to portray more good guys?

What do you got? Show me a good script and I’ll do anything. It’s my job and I love it. I’ll do whatever comes down the pipe.

Can you share the story behind the girl with the sombrero on your chest?

(Laughs). That was done back in 1965. It took us three penitentiaries and two and a half years. A friend of mine, who passed away, a guy named Harry ‘Super Jew’ Ross did that. He did the outline first and then I got kicked out of Quentin. On my way out, I remember him saying, “Don’t let anybody touch it!” It was like a scene out of West Side Story. I was on the bus and he was chasing after it saying, “Don’t let anybody touch it! I’ll finish it!” So, about two months later, he came to Folsom and we did a little more there. And then there was a big riot and they sent me to Soledad and sent him to Tracy. Years later, he finished it in Soledad.

What would you tell the next generation of action superstars?

First of all, Hollywood wants actors that can act tough. They don’t want tough actors. It’s about perseverance and making sure that everybody that works with you wants to work with you again. That means all of those things that your mom taught you about being polite, being quiet, and being ready. Wear clean underwear. All that shit comes into play.

The single most important thing that has guided me and helped me in my career is the simple fact that most of the people I’ve worked with want to work with me again.