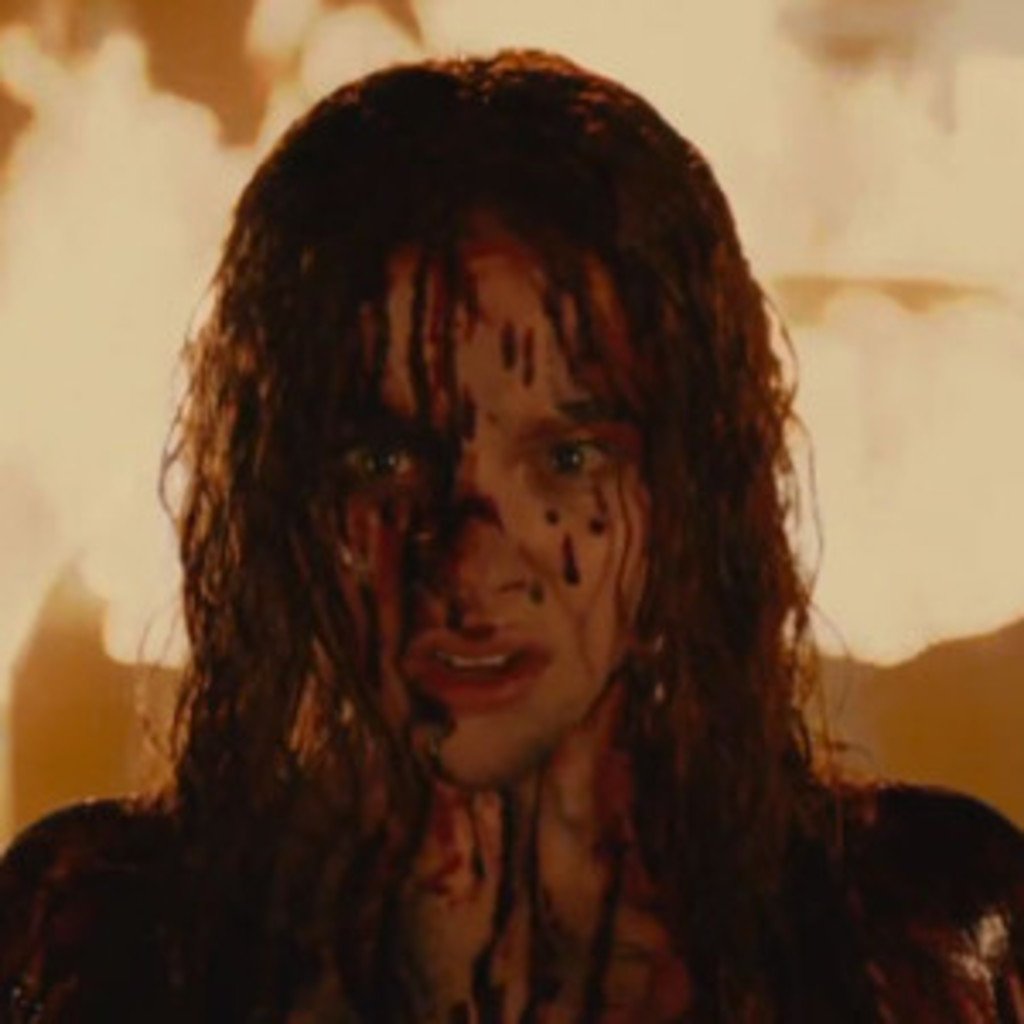 The Carrie remake is another entrant into the High-School-Is-Hell genre. A genre which, regardless of verisimilitude, makes this reviewer grateful to have the mentally-stunted  battleground of high school way back in the rear-view mirror. It would, however, have been pretty awesome to have telekinesis to battle your oppressors as opposed to just a smart mouth wielded in verbal self-defense. When one is bullied, the need for revenge is strong, which still doesn’t quite match Carrie White’s retribution on her tormentors. She even takes it out on the faceless hordes who sit on the sidelines, watching and laughing without lifting a finger to stop anything for fear of being drawn into the cross-hairs of bullies too. Carrie is essentially a PSA on the dangers of bullying in the 21st century, where you can get even get bullied on the internet. In this case, a disturbing video of Carrie’s first period (I don’t me study hall either) is uploaded to YouTube – now your shame can live on 24/7. Of course Carrie’s main tormentor is some dead-eyed rich girl who is used to her rich Daddy buying (and bullying – it starts at home) her way out of trouble.

Director Kimberly Pierce (Boys Don’t Cry) has made a pretty faithful remake of Brian DePalma’s disturbing original take on Stephen King’s famous novel. Julianne Moore (Don Jon, The Big Lebowski)  turns in another good performance, this time as Carrie’s nutty religious mother, who also happens to cut herself like an emo kid. Chloe Grace Moretz holds her own in the titular role first made famous by another redhead, Sissy Spacek. A lot of people will recognize her as Hit-Girl in the ultra-violent & sick Kick-Ass film which blunts the impact of the meek misfit Carrie turning avenging angel. The movie builds a suitably creepy atmosphere with the disturbing mother-daughter relationship yet comes up a bit short as just why these teens pick on Carrie White. You have to call her by her whole name too, as the movie’s character ALWAYS do, which reminded me of Jordan Catalona from 90’s teen hit My So Called Life which featured another redhead, Claire Danes of Homeland fame. Still speaking of redheads, it was great to see the wonderful Judy Greer in Carrie as the gym teacher who helps Carrie. Give her bigger roles Hollywood, she’s awesome. If folks don’t want to see the original, then this 21st century update of Carrie will provide the necessary creepy horror movie entertainments as Halloween draws near along with the inevitable Paranormal Activity sequel. 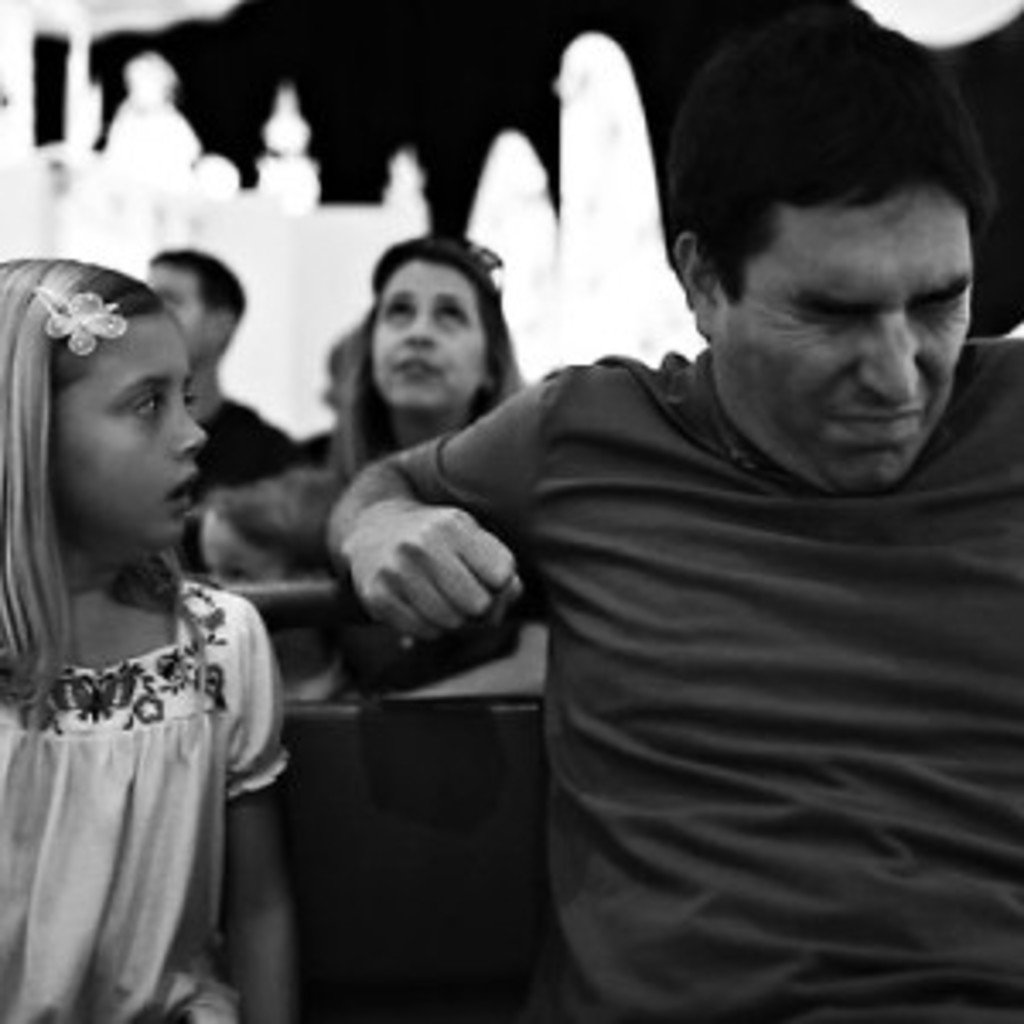 The dark fun-house of Disneyland (-world) is exposed in writer/director Randy Moore’s Escape From Tomorrow. Jim (Roy Abramsohn) is on vacation in Disneyland with his wife and two kids when he receives a call that he has been fired. On the family’s last day too, of all the rotten luck. Jim determines not to tell his wife or kids so they can have fun at the hap-hap-happiest place on Earth. Then the weird shit begins to happen. Jim starts sweating & getting all claustrophobic on rides. He starts obsessing over these two French girls he keeps running into. He has visions where his is convinced that the animatronic robots are coming to live. Basically Jim is losing his marbles. In Disneyland. Surround by weirdos, tourists and Goofy. Jim’s grasp on reality begins to slip. Then he meets an enchanting MILF who has a sparkling pendant which seems to hypnotize him as the next thing he knows he wakes underneath her riding him. She tells Jim that all of the Princesses in the park are high-class hookers for Asian businessmen. She claims there’s crazy stuff lurking underneath the surface of the make-believe fantasy-land. Jim doesn’t quite believe her until he wakes up inside Epcot in what could best be described as a David Lynch nightmare involving mad scientists and the mysterious “cat flu” disease spreading around the park. WTF is going on here? Does this place turn people into cats? Has Jim crossed over to the other side of sanity? Questions loom all around the squeaky clean Disneyland yet danger lurks beneath.

Moore received a lot of press when the movie debuted at Sundance as he filmed the movie without the approval of Disney. At the time no one thought the Mouse would let this movie go without suing the filmmaker for not receiving permission to film his black-and-white disturbing indie film at their parks. How could they? Well, so far they have stayed mum on the subject which has benefited Moore’s film with all kinds of free publicity and hey, even in this day and age it is giving Disney good press for letting it slide. Head over to the Sie Film Center to check out this noir-ish, bleak ride yourself as the movie has been held over for another week. Or you can watch it on VOD in the comforts of your own home, if you’re into that kinda thing.

Escape Plan – Ahnuld & Stallone team-up in action movie set inside a futuristic prison that no once can escape from – kinda like Disneyland. Hey, the movies even share the same first word in the title. This could either be a decent GenX nostalgia flick for boys raised on these guys actioners from the 80s like Rambo 4 or The Last Stand or it could be a turd like The Expendable. Coin toss.

The Fifth Estate – a dramatic take on Mr. Wikileaks himself, Julian Assange, played by Benedict Cumberbatch. The movie tells the inside story of the young company. It also features the mega-talented German actor Daniel Brühl who can also be seen racing Thor in Rush.

Enjoy some movies this weekend.