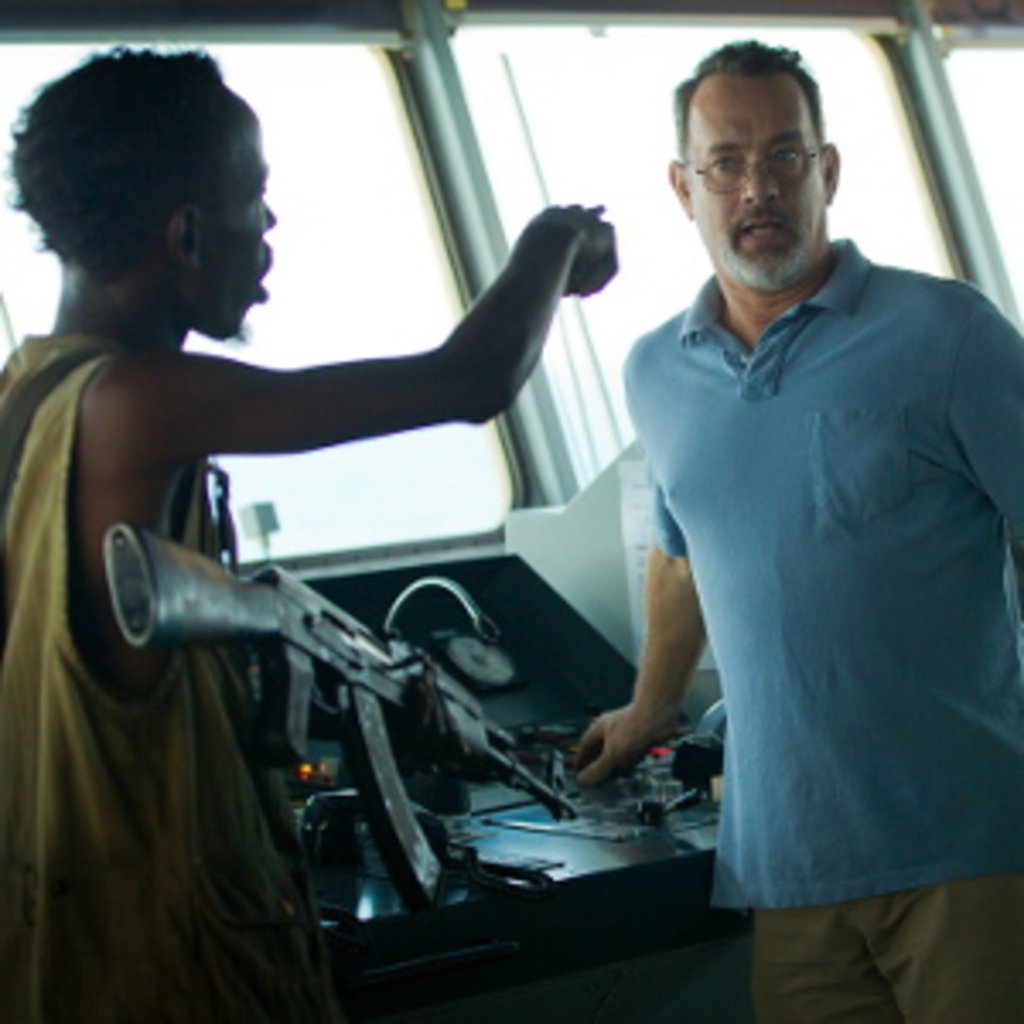 Captain Phillips is a Pirates movie without Johnny Deep? Whaaaaat? Ok, this one has Tom Hanks and a Pirate “captain” who looks like Omar from The Wire if he didn’t eat for a year. His name is Muse (Barkhad Abdi), not named after the band, although his not-too-friendly nickname is Skinny. You see, even pirates like Skinny have bosses who demand they risk their lives so the fat cats above them can all get rich. The movie is “based on a true story,” the hijacking of the Maersk Alabama container ship in April 2009. Captain Rich Phillips (Tom Hanks) tries his best to keep his crew safe as the ship is taken over by 4 Somali pirates with guns.

Director Paul Greengrass (Bourne, United 93) filmed this tense and sometimes gripping story in his trademark close-up, shaky camera-style that by now is getting becoming conventional. Even though I live in Colorado, this is one grass I don’t dig. Ha ha. Seriously though, if this film knocked off about 30 minutes from it’s over two hour run-time I think I might have enjoyed it a lot more. How many Spaghetti Western matching eye-sight standoffs did this film need? I counted 17 and each one seemed to last longer than the first one. If you know how this turned out in real life, then some of the film’s tension would be resolved for you. Luckily for me I had forgotten even though we know no one is killing Tom. Hanks is pretty fantastic in the movie, especially the last part of the movie as he is kidnapped by the pirates in the Alabama’s rescue boat. By this time the mighty American military has shown up with a warship & destroyer that comically follows the pirates in the little orange rescue boat – unable to easily rescue Capt Phillips even with such massive technology & firepower.

Those scenes could not be a better representation of 21st Century America – a “free” market defended by trillions of dollars of weapons and casual disregard for the worker’s lives much less any thought to the externalities of a neoliberal globalized economy. Hanks represents Baby Boomer America, early in the film he worries to his wife that their kids are growing up in a world different from what they lived through. No longer can you get a solid job by doing hard work – now everything costs more, you work harder & get by on less. This is not ObamAmerica yet, not in 2009, Barry had not even spent his first 100 days on Pennsylvania Avenue when he had to stare down this Somali pirate threat, he also was facing a more dangerous enemy that had just began – the Tea Party “patriots.” If our tax-dollars go to supporting military interventions to save Americans who work for a Danish shipping giant (Maersk) is the market really “free”? Because we get cheap prices on the plastic junk in those containers that Maersk is handling, does it benefit us as citizens as much as the profits benefit these large multinational companies who are NOT providing their own security for their business and workers? Very interesting questions are raised in the background of this thriller, questions I would love everyone who sees this movie to contemplate about late-stage capitalism’s true costs and benefits.

Also, the last ten minutes of the film are so gripping and intense that you could call it Tom Haneke, after the Austrian auteur who specializes in unflinching depictions of humans and the sometimes cruel things we do to each other. The movie opens everywhere. 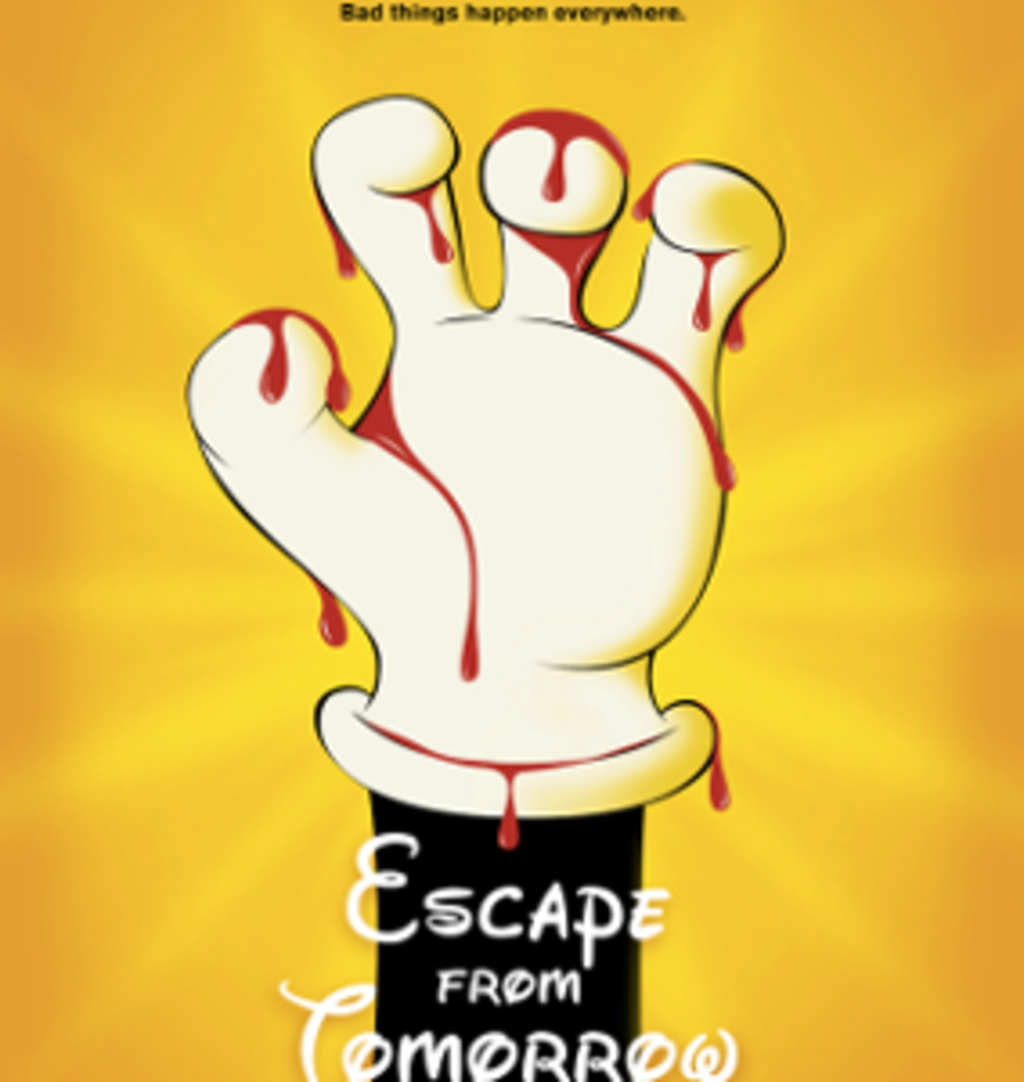 Stay tuned for a review of Escape From Tomorrow the Sundance indie hit real soon. This is the movie that was filmed in Disneyland and Disney World without Mickey’s knowledge or permission. Circumstances beyond Your Humble Reviewer’s control – cough,cough, baseball playoffs, cough, cough – have conspired to delay this week and possibly the next few weeks usual bumper crop of reviews. Bumper crop equaling three. Please stay tuned though, we are purchasing energy drinks by the case to work round the clock to bring you that top-notch film coverage that you desire. The movie opens at the SIE Film Center.