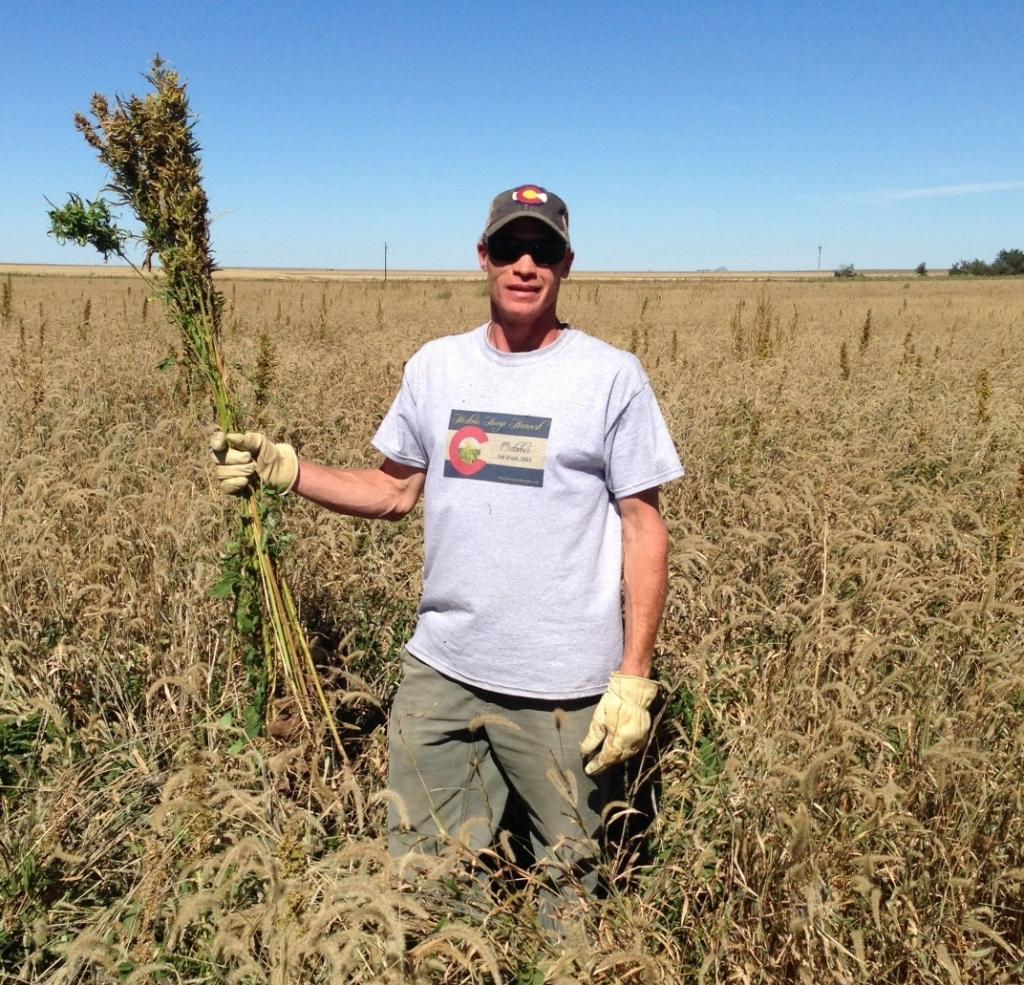 Ryan Loflin just gave Uncle Sam the bird–and made history in the process. On Saturday, October 5, the Colorado farmer and forty or so supporters began hand harvesting his 60 acre plot of industrial hemp near Springfield. The miracle plant hasn’t been grown in America on a large scale since patriots were encouraged to do it during World War II. It’s still illegal under asinine federal law, due to the trace amounts of THC that connect it to marijuana. It’s even technically still off limits in Colorado, though that will change next year when the state begins officially registering hemp farmers—progress made possible by Colorado’s model medical pot rules.

Loflin first learned about hemp a little less than a decade ago. He was researching the per acre profitibility of different Canadian crops. Hemp was at the top of the list. When Colorado’s medical marijuana “green rush” got underway in 2009, Loflin wondered if it might pave the way for pot’s sober sister. A year and a half ago, he began ingesting hemp oil and seeds on a daily basis. He sowed a handful of hemp plants in his Crested Butte home last winter. Then, on June 13 of this year, he air seeded 60 acres of his father’s Springfield farm with seeds he’d ordered from Europe. Some of the packages had been intentionally mislabeled “birdseed” to foil U.S. Customs agents. One was seized. All Loflin got was a letter in the mail.

“I wanted to be the first,” says Loflin. “I have this thing with being first.”

Enthusiasts converged on the Loflin farm from five states. California, Illinois and Texas were represented. One couple road tripped all the way from Idaho, even braving a snowstorm in Wyoming. David Bronner, of Dr. Bronner’s Magic Soaps, was there. As was Hoodlab’s Adam Dunn. Whole Foods, NORML, Nutiva, Hemp I Scream, Recreator and Prana Clothing all had agents in attendance. Journalists from the Associated Press, KRDO and the Lamar Ledger were present. The New York Times covered it. Gloved volunteers rode Loflin’s trailer out to the field and happily pulled hemp stalks up by the roots. Loflin first experimented with using a combine. The dominant foxtail weed was clogging the machinery, though. So he asked his Facebook friends for a hand. They provided 80.

As laborious as it can be—blisters and some blood attest to that—hand harvesting increased the value of Loflin’s yield. A combine would have delivered primarily seeds and leaves. Seeds can be pressed for uber-nutritious oil or saved for next year’s sowing, but the manual method left stalks and roots intact too. Hemp’s hard external hurds, virtually impervious to insects (pesticides are never necessary, but they’re irrelevant in this case), can be turned into sturdy building materials like hempcrete. Its inner bast fibers are woven into rope and durable fabric that outlasts cotton. Bronner is loaning Loflin a seed press, as he has a vested interest in American-grown hemp (Bronner is a big importer). All parts of Loflin’s plants are already spoken for, down to the roots.

On the subject of hemp’s roots, they don’t just transfer nutrients and water to the plant above. They also clean heavy minerals and toxins from the soil. Loflin’s crops were initially part of Colorado’s pilot phytoremediation program before it was rendered obsolete by plans to officially license growers in 2014. That’s when Loflin’s green ended up in a gray area. He wasn’t afraid. If he built it, opportunities would come.

Loflin intends to triple his acreage next year. He also plans to plant a month earlier. There’s even talk of a party with an actual sound system and a band or two. He won’t be the only farmer in the game, but he’ll definitely have a leg up on the competition.