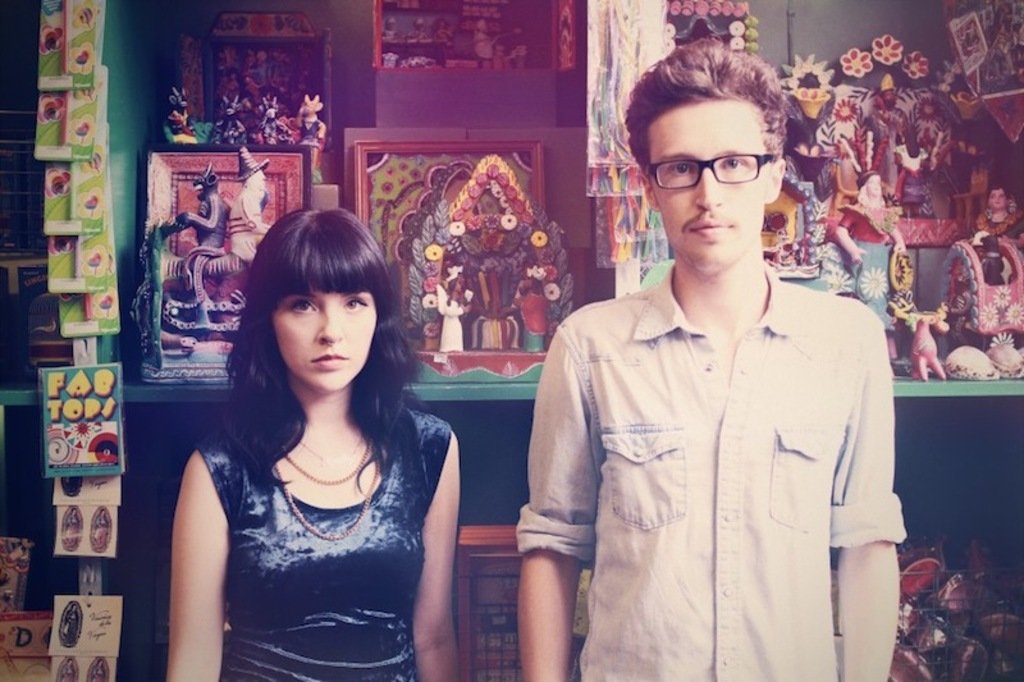 Onstage, they are an up and coming band. Offstage, they are a couple. Together, Timothy Heller (vocals, ukulele, piano) and Jared Ryan Maldonado (vocals, guitar) are Dresses, a Portland-based indie-pop duo that has been described as “infectious” by Teen Vogue and compared to bands like Of Monsters and Men and Chvrches by Elle Magazine.

Dresses is currently on tour with The Limousines and Mona, and will be stopping to play in Denver at Moon Room at Summit Music Hall on Friday, Oct. 25. The show starts at 8 p.m. Tickets are $13.

We caught up with Jared Ryan Maldonado of Dresses to talk about the duo’s beginnings, their developing sound and their SideOneDummy debut album, Sun Shy, which was released on Oct. 22.

Maldonado: I started playing when I was really young, probably 10 or 11. In high school I was in a metal band with a bunch of my friends. My friend from that band had started a solo project, and I went to drum with him on his tour. It ended up that I had written a bunch of songs and then met Timothy…

303: Tell me the story of how you and Timothy met and formed your band.

Maldonado: She went to a neighboring high school. I first saw her play at a Battle of the Bands. I loved the way she looked and sounded. I always sort of had a secret crush on her. She added me on Facebook and said she liked my music, so we decided to meet up.

303: How did you come up with the name Dresses?

Maldonado: It’s sadly not that exciting. We were taking pictures with our friends and throwing out name ideas, and our friend just said, “Dresses.” I guess we just liked the way it sounded and it kind of fit with what we were doing, so we decided to use it.

303: You and Timothy are dating, how does that play a role in your songwriting process?

Maldonado: It’s good and bad sometimes. It’s really easy to work with someone who you’re that close with. But sometimes it’s easy to distract each other.

Overall, I think it’s interesting. We’re still kind of learning how to work together and find our sound so it’s cool that people are digging it. It’s inspiring.

303: What was your songwriting process like for your debut album, Sun Shy?

Maldonado: It’s a lot easier with two people. We didn’t really have anything holding us back. It’s nice just having the two of us, just being the sole voices and deciders of everything.

303: Who are some of your main musical influences? What are you currently listening to?

Maldonado: We both like so many different types of music and different artists. Timothy likes a lot of solo female singers, like Lorde and Kimbra. I’ve always liked Modest Mouse and Death Cab for Cutie, and now bands like Local Natives, Hellogoodbye and Vampire Weekend. It’s kind of changed over time, but we both show each other a lot of music. One of [Timothy’s] favorite artists is also Drake, which you’d never expect.

303: Now let’s talk about the tour, what are you most excited about and what do you hope to get out of it?

Maldonado: It’s cool that were going everywhere. I’m excited that we get to see all these places. Timothy has never even been anywhere past Denver. I’m just excited to play for people who have probably never heard of us. Were bringing our album on vinyl and CD.

303: Have you played in Denver before? Is there anything particular about the Denver audience that you have noticed or are particularly excited about?

Maldonado: We actually played our last show with Kate Nash at the Bluebird Theater. It was so awesome, it was sold out and we got the best response ever. People were buying our CDs and our shirts. We learned pretty quickly that people who have never heard of us and see us live really dig our music. It’s really cool to see that people like it, and that people still enjoy going to live shows and seeing new music.

303: What can we expect from Dresses in the next year?

Maldonado: I think the idea is that we’ll just keep pushing this album. We’ll just continue to push it, and hopefully people will pick up on it and enjoy it. Either we’ll be touring off of this music for a while, or we’ll record another EP or something. It’s kind of up in the air.

303: Last question, just for fun… if you weren’t a musician, what would you be doing?

Maldonado: I was all ready to go to PSU [Portland State University] for film right before I decided to tour with my friend from high school. So, I guess I’d probably go back for film, or I might just go live in the middle of nowhere. I kind of dropped everything when I left for that tour, and figured I should just continue…and that’s where I am now.