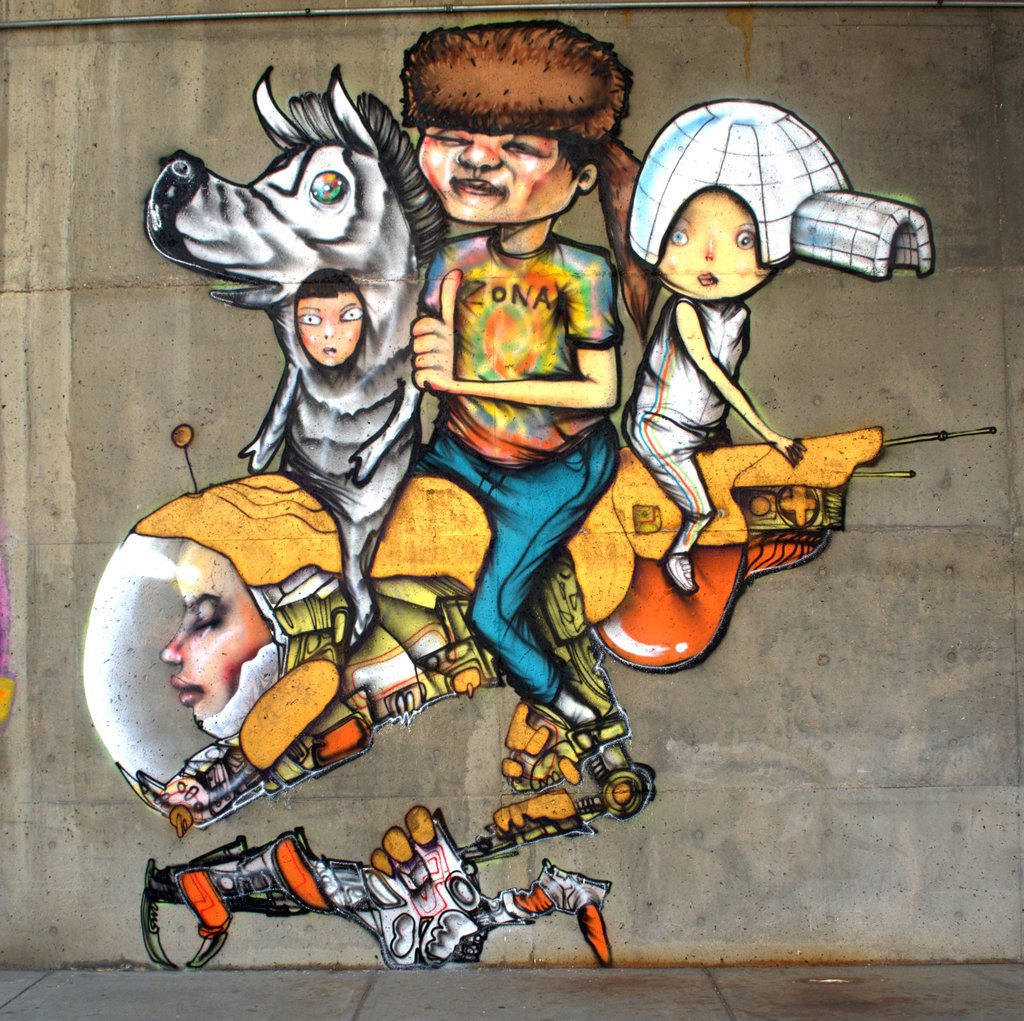 David Choe lives a crazy life and paints in amazing places. Denver is lucky enough to be one of them. Choe is an art school drop out, world renowned street-artist, law breaker, radio talk-show host and unexpected Facebook millionaire investor. Street art has taken him around the world. Today, his unbelievable murals line 13th and Champa in the alley behind the Denver Center of Performing Arts.

Choe painted four of the six jaw-dropping murals in 2012, which have lasted the test of time. Choe returned to Denver this year and added two more paintings to the wall. They are inspired, electric, colorful and chaotic. It’s as if they want to jump off the concrete. An ordinary grey wall is now a gallery commemorating the fast life and times of David Choe.

Choe’s fame and wealth can be attributed to Facebook. In 2005, Choe was asked to paint murals on the walls of the original Facebook office. The once president Sean Parker came to Choe and offered him either $60,000 as payment for his work or a handsome amount of stock. Even though young artist Choe sorely needed the money, he took a risk and said yes to the stock. No one knew how big Facebook would become nearly a decade ago. It was a gamble that would pay for a lifetime.

Flash forward to Spring 2012: Facebook announces it is going public and the price of shares skyrocket. People estimated David Choe’s shares to be worth over $200 million. Facebook has since carved out Choe’s original murals and shipped them to every single office in the world.

Outed by the cover of the New York Times in February 2012, Choe is a reluctant millionaire. He had every news organization banging on his door. He agreed to speak in an exclusive Barbara Walters interview where he explained his hesitance towards the huge amount of money.

“It’s going to sound horrible for me to say money is meaningless, but everyone’s like, what are you gonna do now now that you have all this money and freedom? I did everything I wanted to when I had nothing. I’m still going to do whatever I want except more people are just going to bother me now.”

Choe is a rolling stone who spends most of his time traveling. He details the cash-fueled escapades on his radio shows. The sheer insanity of the stories sound like fiction. They include frequent trips to Vegas casinos, jumbo jets, prostitutes, all while Choe was winning and losing millions. He eventually became exhausted from the gambling, women, and fast-paced lifestyle. Choe described it as a severe loss of touch with reality. Sober and in control, David Choe now gets his excitement fix from travel, food, and of course, street-art.

“Don’t feel sorry for me, this is like a God-like amount of money where I could actually change the world and do things to help humanity.”

His documentary “Dirty Hands: The Art and Crimes of David Choe” (2005) details Choe’s sordid past, illegal tagging, getting arrested, going to prison, as well as his work with Facebook in the beginning stages of it’s creation.

“As an artist, I often wonder what my purpose is or why I do what I do. So those things will hopefully come into more clarity, or maybe not. I don’t know.” 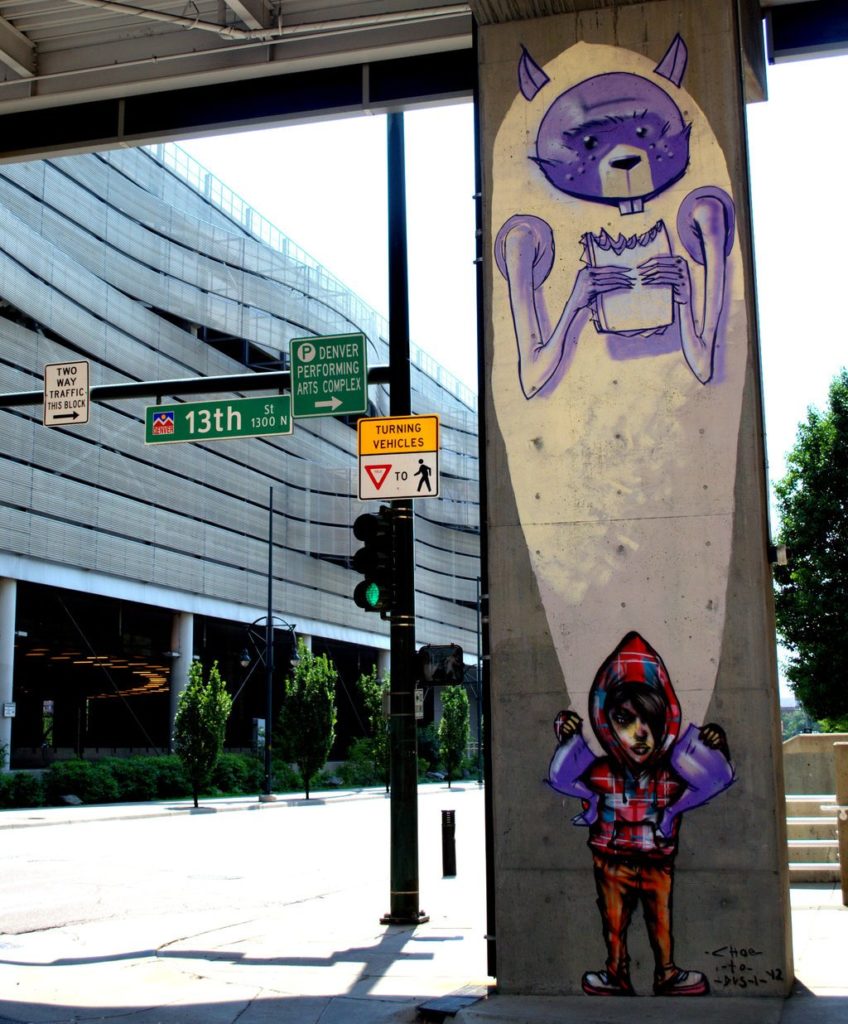 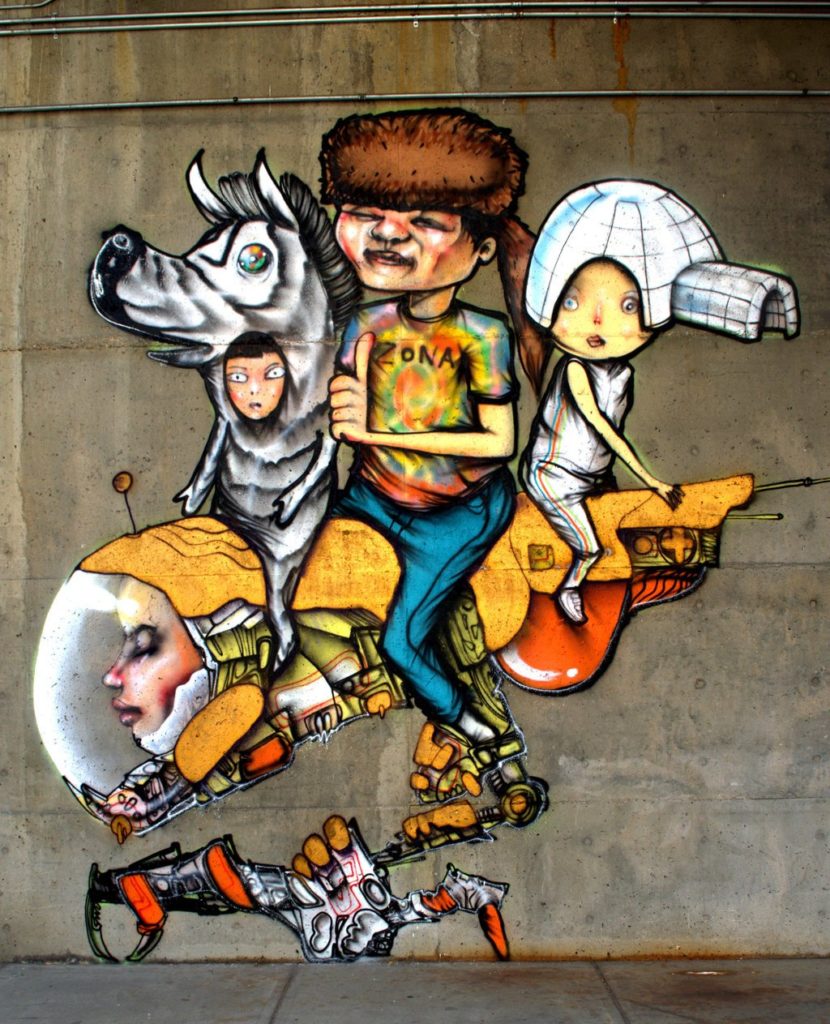