Don’t Miss: The fabulous rooftop patio and the glorious views you can’t experience from any other rooftop

Historians Ale House has a very unassuming appearance from the outside. Located off south Broadway, the large brick building doesn’t have any huge signs, no pomp and circumstance. When I entered I was expecting the restaurant deco to coincide with the outside. However I quickly realized when I walked in my assumptions were completely wrong. Instantly I was blown away by the modern ambiance and sheer size of the place. The bar stretches almost the entire length of the main floor and climbs the wall to the top of the ceiling. Behind the bar lives 40 beers on tap, 30 of which are home-grown, and practically any liquor one could want. The drink list is vast and provides unique specialty drinks some of which mix beer and liquor together to offer a refreshing taste.

As I stood in awe of the place, Denise aka “Jersey”, the general manager, greeted me warmly at the front. As she began to walk me up the three flights of stairs, I wondered where exactly is she was taking me. To my surprise we ended up on an amazing rooftop patio equipped with a full bar, two televisions, a fire-place and a remarkable view. This rooftop patio definitely rivals all patios in the city. The direct view isn’t of the Denver cityscape, as most rooftop bars views are. Instead you can watch all of south broadway buzz below while having a great view of the sunsetting over over the Rockies.

With the pleasant surprise of the inside deco and the rooftop patio, I was very interested to try the food. After reviewing the menu, items such as a mint infused lamb burger and a bleu cheese & bacon stuffed blackened beef patty sparked my palates curiosity. 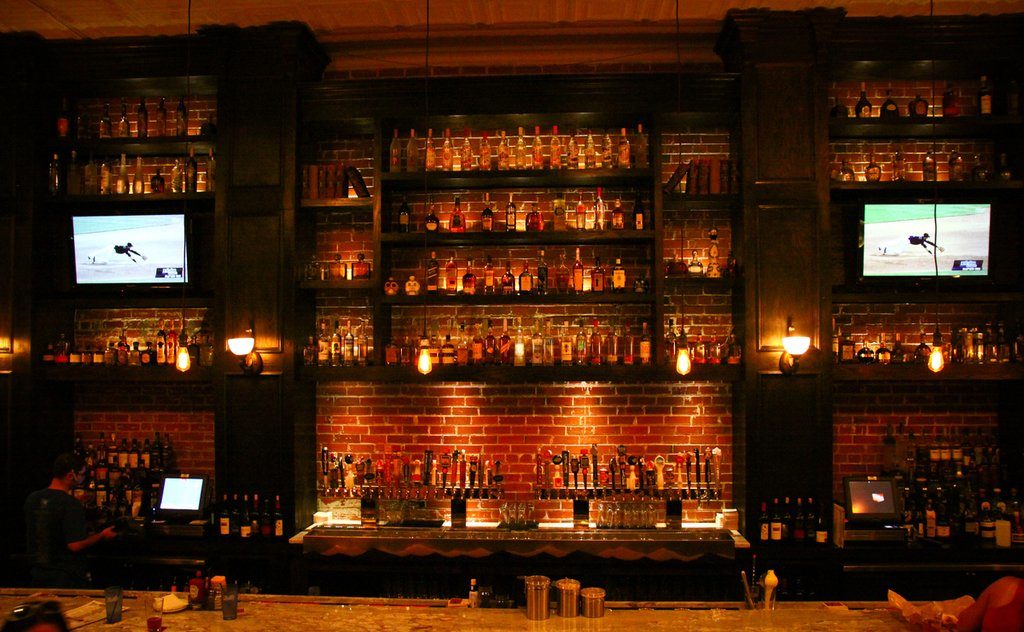 All Photos by Brent Andeck

Jersey took it upon herself to bring out items she thought best represents the restaurant. First on the table, the BLT Dip appetizer. A six-cheese blend mixed with bacon, lettuce and oven roasted tomato dip served with toasted crostini’s and green apple slices. The dip was great with the crostini’s however, I was hesitant to taste the green apples with the dip. Wanting the full experience of the appetizer, I went ahead and dunked the green apple slice into the BLT Dip and took a bite. The uncommon duo now ranks amongst my top appetizer of all time. You can literally spread this dip between two slices of bread and think there you were eating a BLT.

Loving the appetizer, I was excited for the entrée’s. My favorite ended up being the Southwest Burger. The burger was delivered in perfectly wrapped brown paper and tied up with a bow by a piece of thin rope. I had to ask Jersey if all the entrée’s are brought out in this form? She explained that all orders, dine in and to go, are presented in this fashion. The inspiration for the brown paper wrap came from the way the Pittsburg sandwich is served and the realization is that it is a fun experience for the guests and easy clean up for the staff.

As I looked around, no plates were in sight. So I did as all the other patrons and  pulled at the end of the rope to open the brown paper. With the anticipation you get when you are a child opening Christmas presents, I peeked into the paper before it was completely open. The smell caught my attention first. Then, there it was in all its splendor. A hot chorizo and jalapeno cream cheese stuffed patty topped with house made green chili served on a butter bun. The taste was different from anything I have ever placed on my palate. This burger comes with built-in spicy kick and sizzles in your mouth as you swallow. Served with fries, this meal puts a nice spin on the expected, traditional bar food.

I asked Jersey, who came up with such tantalizing food creations? She prefaced her answer with the fact that she had no prior background in the cooking arena, but she came up with most of the items on the menu. Jersey mentioned she would sit with her pen and create on paper first, then she would have the cooks follow her cleverly designed recipe. “It’s so fun having the cooks make the food and watching the customers enjoy it”. She was determined to create a unique dinning experience while adding a twist to classic bar food and in my mind she is a complete success.

This tucked away, new neighborhood bar, opened just 2 months ago, has much to offer people who live close and travel far. Historians Ale House has hit the nail on the head with all aspects of the restaurant: food, service and ambiance. It is definitely here to stay. I suggest you go unwrap your present at Historians Ale House, but don’t wait until Christmas.