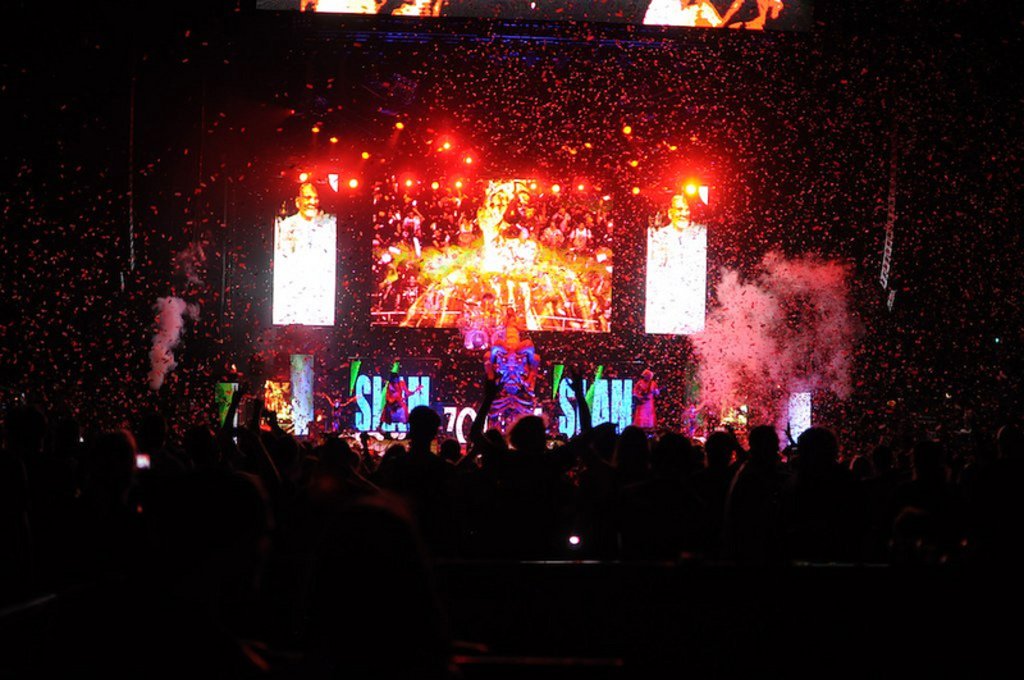 When a world-renowned musician, film director and film producer come into town, and they all happen to be the same person, you know you’re in for one hell of a show.

After establishing himself as one of the most prominent figures in all of Rock n’ Roll, and a dominating force behind the camera — films like Halloween, Halloween II and The Devil’s Rejects — Rob Zombie returned to tear up the stage with his almighty band of brothers (John 5 and Ginger Fish, formerly of Marilyn Manson, with Piggy D on bass) to headline the 2013 ROCKSTAR ENERGY DRINK MAYHEM FESTIVAL all summer long.

Zombie coalesced his passions for film with his love for music, manipulating the visuals and theatrics of his own stage show to accompany his music, as would a film be accompanied with a soundtrack.

Burning hot Fiddler’s Green Amphitheater — one of the largest outdoor venues in all of Colorado — in the heart of South Denver, became the ultimate source for all things Metal on Sunday, July 7th, 2013. Streets were shut down, tents advertising their respected merchandise were sprawled about and the open air amphitheater awaited the ensuing chaos of Mr. Zombie. The stage was set, the lights were black, and the man of the festival was seconds away from being welcomed into the open arms of 15,000+ packed into the amphitheater. The sounds of Indian sitar rang out through the stadium commencing Zombie’s set with “Theme For The Rat Vendor”, from his 2013 album, Venomous Rat Regeneration Vendor.

Large screens draping over the entire back wall of the stage accompanied Zombie’s opening anthem, “Teenage Nosferatu P***y”, with menacing clips from the 1922 F.W. Murnau classic, Nosferatu. Zombie was hoisted on a skull-laden pedestal, torches burning bright on both ends of the stage in his “rock God-like” moment, just before the lights went black.

Flames shot into the air, announcing the radio friendly, “Superbeast”, as a wave of beach ball-like balloons fluttered about the roaring crowd below, before the lights went black once more.

It was almost as if each song was a different concert, each sporting their own theme, lighting, stage setup, and experience. Whether it be cartoon aliens, a giant boombox that Ginger Fish drums upon, to Elvira-esque women on screen, women running around in bikinis, a giant Tim Burton-looking machine that Zombie rides on stage, or an enormous animatronic devil—Rob Zombie never lets up, storming through song after song. Midway through the show, John 5 delicately plucked the “Star Spangled Banner,” elegantly connecting with the crowd on a whole new level, until the perennial anthem of our country kicked off abruptly and Rob Zombie fired on his best Grand Funk Railroad impression — with much metal influence — kicking out their number one single, “We’re An American Band,” appropriate, as July 4th had just come and gone. The crowd hollered out “We’re An American Band!” as each chorus came ’round, concluding with a full-on patriotic audience rallying call of “USA!” Pouring rain began to fall on the chanting masses, cheering and throwing their fists into the starless sky.

It’s quite obvious Zombie is more like a proud father than a director of his terrifyingly terrific array of films when you see him live in concert; at each and every turn there seems to appear another clip of film or snippet of vocal content birthing to life concepts and imagery that intertwine Zombie’s music with his film. The screens that adorned the stage setup behind him flashed vivid clips of films like House Of 1000 Corpses, while shrieks from Sherri Moon, Zombie’s character within the same film crept through the speakers during the always popular “House Of 1000 Corpses” hymn, featured on his 2001 release, The Sinister Urge.

Zombie paid his respects and surrendered the stage to his fine bandmates, allowing Ginger Fish to perform a wild drum solo, and John 5 to shred the guitar, soloing through the White Zombie single, “Thunder Kiss ’65”, before Rob Zombie finally declared the show’s end. Lights to black. Until the rain returned – and so did Zombie.

The encore was fit for only the indelible “Dragula” that had become wildly famous since it’s release in 1998 release on Hellbilly Deluxe—a record now three times platinum. The rain poured out from the heavens above, the crowd unfazed, shouting the back the main chorus lyrics, “Dig through the ditches and /burn through the witches / I slam in the back of my Dragula,” until plooms of confetti exploded from like shotguns from the stage as Rob Zombie’s denouement came to roaring close: “Zombie! Zombie! Zombie!” The film-like theatrics coupled with the soundtrack of the festival had come to an end. The lights went black.

Zombie proved to an already devoted, captivated audience, exactly why was headlining the 2013 Rockstar Energy Drink Mayhem Festiva, and why no one else could have done it any better.

Other Notable Artists At The 2013 ROCKSTAR ENERGY DRINK MAYHEM FESTIVAL:

Chicago Progressive Metal quintet Born Of Osiris (Sumerian Records) opened the eyes and minds of thousands with a flurry of consummate musicianship, professionalism and awe-inspiring command of the stage. A harmonious barrage of guitar solos from Lee McKinney, fervent energy from bassist David Darocha, pristine accuracy of percussion from Cameron Losch, enticing keyboard work/backup vocals from Joe Buras, all led by the essential vocals of Ronnie Canizaro at the helm, turned into one of the most exhilarating sets of the day. Equipped with older tracks like “Abstract Art” and “Bow Down” from their 2007 release, The New Reign, and their recently unveiled single, “MΔCHINE”, from their upcoming release, Tomorrow We Die Alive (August 2013), Born Of Osiris demanded the utmost respect from the crowd with their high intensity, all but flawless virtuoso.

Phoenix-based Death Metal outfit Job For A Cowboy (MetalBlade Records) pleased thousands of fans as they fused sounds of the new and the old into their five song set, playing crowd favorites “Entombment Of A Machine” and “Knee Deep” from their debut Doom EP released in 2005, while “Imperium Wolves” held it down for their most recent release, Demonocracy. Screaming guitar leads from Al Glassman and Tony Sannicandro and insatiable guttural vocals from frontman Jonny Davy had the audience in a frenzy, leaving them with little, if any, strength to push forward through the arduous outdoor metal festival that is Mayhem.

Residing in Queens, NY, the Northeastern giants of the increasingly popular genre of Deathcore — a combination of Death Metal and Hardcore music — EMMURE (Victory Records) sought nothing more than to fracture their sound into the hearts (and bones) of the audience below. With a respectable six album discography and hundreds of venues left in their wake, EMMURE used their axes accordingly, sledge-hammering out songs like “Sunday Bacon” and “Children Of Cybertron” beneath the burning summer sun. While, oceanic waves of bodies bounced up and down in mellifluous unison to tunes like “Solar Flare Homicide” and “Demons With Ryu.” The Northeast came packing some heat, and relentless EMMURE came out guns blazing.