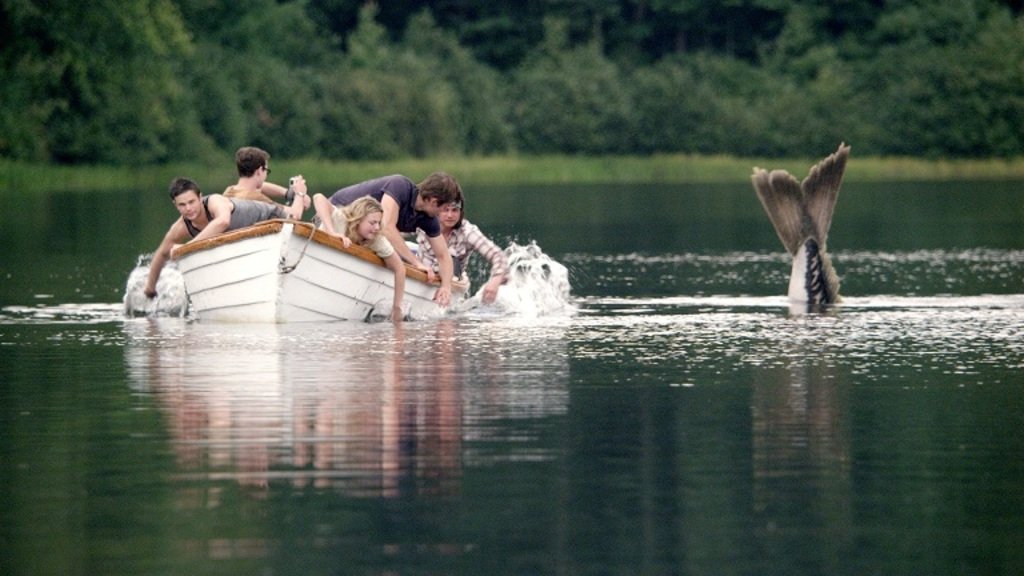 There is no denying it; I’m a sucker for the horror genre, even the good, bad, ugly, cheesy, slasher kind. Speaking of the cheesy sort, horror icon Larry Fessenden is back in the directing chair with Beneath. I was privy to an early screening of the film before its limited theatrical release. I am a big fan of the Director/Producer, as he has dedicated his life to making clever Indie Horror films on a small budget.  Kind of like Rob Zombie, but with less greasy hair, drooling and cleaner babes.  Have you seen the 2007 environmental horror flick The Last Winter? I highly suggest. As for Beneath, not so much.

The film’s premise is simple: group of teens head out to mythical lake to celebrate graduation, their independence and overall grooviness. Teen shenanigans ensue, all while giant man-eating-fish stalks from below. Why compete with a Spielberg directed killer-fish movie? Beats me. Despite the familiar premise, I went in with an open mind. I can always delight in some aspect of these films, I rationalize.  However, after finishing Beneath I began reassessing my decision making calculus. Don’t you hate those times when you self-reveal a flaw in your model?

Beneath is stuffed to the brim with stock horror tricks and characters, including but not limited to, creepy old Deliverance type guy (cue the banjo), nerdy film boy, his female counterpart, and hot popular girl. Within the first 20 minutes the writers hit every possible cliché, as if making sure to tic them off their horror 101 to do list. “Old guy” warns the group to stay out of the lake due to eminent danger. Promptly thereafter, “nerdy girl’ gets the axe, or should I say the bite? The friends, of course, are un-phased by her death, even with the dead body sprawled out on the boat. Maybe they planned on using her for chum later, I was thinking.

The film continues on its formulaic path, so much so that I felt I was being set up for some great inside joke or reveal, like a Sixth Sense moment. Absurd lines were said seriously and the teen’s portrayed real fear of the CGI produced killer-catfish-hybrid. Serious and campy, portending something delightful to come. This disciplined inanity kept leading me to finish the film, surely the director would give it to us good, al la House of Wax or The Blair Witch Project. Or perhaps it would be another Piranha 3D? There is a reveal, but not the kind that saves this film from going down in the annals as way beneath the effort. Try dipping your toe elsewhere.