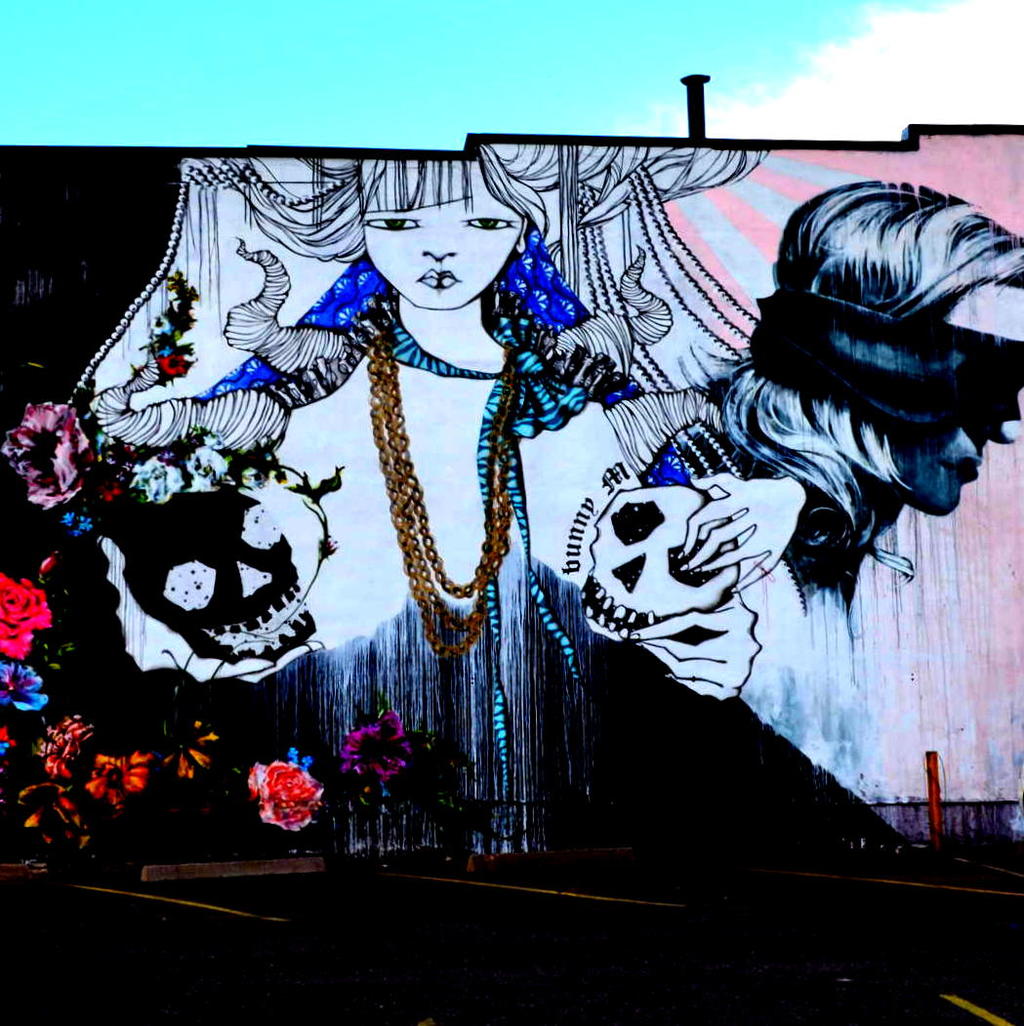 The culture of Denver is heavily influenced by street art. The historic North-East district known as Five Points is no exception. This neighborhood is visually stimulating for Denver-ites of all shapes and sizes. It emulates the Art District on Santa Fe with it’s growing number of studios, artist driven communities, and colorful pieces mounted fearlessly on concrete walls.

Some murals work as a form of advertising. Business owners draw customers in to their store with bright, eye popping pieces. Other murals exist exclusively as high-art. All types of graffiti add meaning to the lifestyle of this district.

Five Points gets its name from the intersection of 26th Street, 27th Street, Washington, and Welton. Historically, it was known as the Harlem of the West. The modern population ranges drastically in age, ethnicity, and vocation. I’m constantly surprised at the number of trendy businesses that can be found in the area. While still rough around the edges in certain spots, Five Points has been raising the bar. Beginning with street art.

I had a preconceived notion of Five Points until a close friend moved into the neighborhood. Perks include the location to Lower Downtown, the cost of living, and the growing number of inhabitants. Let’s not forget the gorgeous murals dawning the streets. Local artists who receive permission to paint the walls define Five Points culture.

My favorite piece of graffiti in Five Points was a collaboration done in May 2013 by brilliant native Denver street artists Bunny M and Square. This spectacular street art is being displayed on a South facing business wall on 22nd and Champa. Bunny M and Square as local artists have mixed anonymity with credibility.

Bunny M’s pieces can be found across the country in Brooklyn, New York City, Chicago, Los Angeles, San Francisco, Portland, and Denver. She blends sharp anime with classical female portraits, then splashes them with unexpected colors. Bunny M is equally known for her sugar skull-like design and her use of bizarre animal features. There is something raw, feminine, and powerful about each piece. She falls in her own field entirely for street artists, representing feminism in this patriarchal world. Check out more of Bunny M on Flickr and look for her street art scattered throughout Denver.

It’s no surprise Square and Bunny M’s mural on Champa has a protective security camera mounted on the side of the building. It is absolutely worth seeing in person. Since it is sanctioned, it will last and be absorbed into Five Points culture.

An abundance of beautiful pieces are found where the light-rail ends. This similar colorful painting sits on Welton Street, facing the light rail station. It emphasizes feminism, cultural identity, and questions beauty depicted through a surreal point of view. Signatures are sometimes difficult to pinpoint on larger murals. This artist or series of artists did an amazing job at capturing reality in these three haunting female portraits.

Further North in Five Points you find the graffiti lining Larimer Street. These alley ways are absolutely decked out in bright, crunchy tags and beautiful Colorado themed paintings. The mural below is about 40 feet tall and demands attention on the South facing wall of the Motorsports Gallery. It is a testament to the colorful and exuberant culture in this district. The unbelievable artists who work for this gallery have captured a complex and street-emphasized culture of Colorado. The next time you’re on Larimer, be sure to cruise past this work of art. Allow the giant mural to draw you in as the smaller, intricate pieces take you by surprise at every turn. 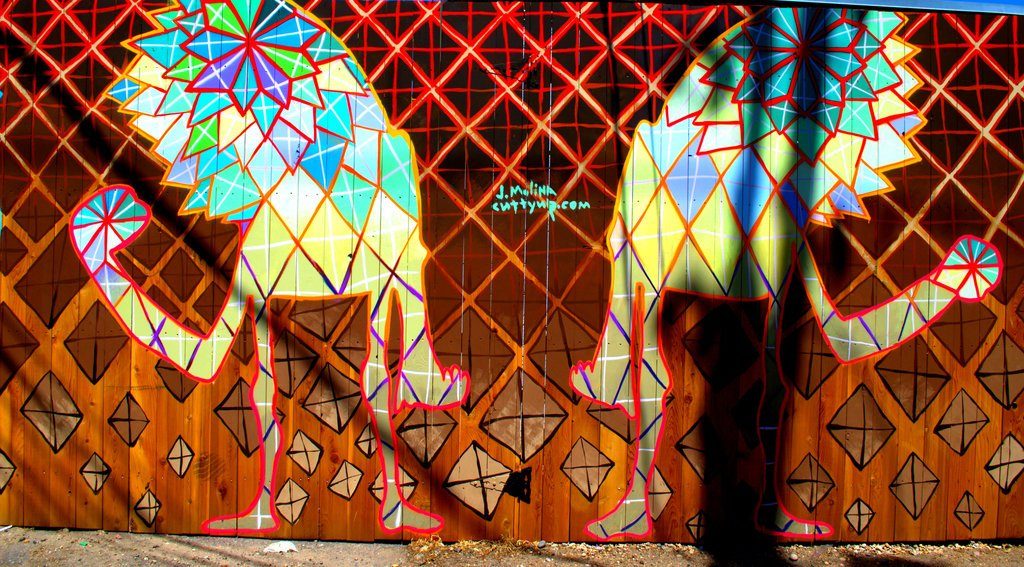 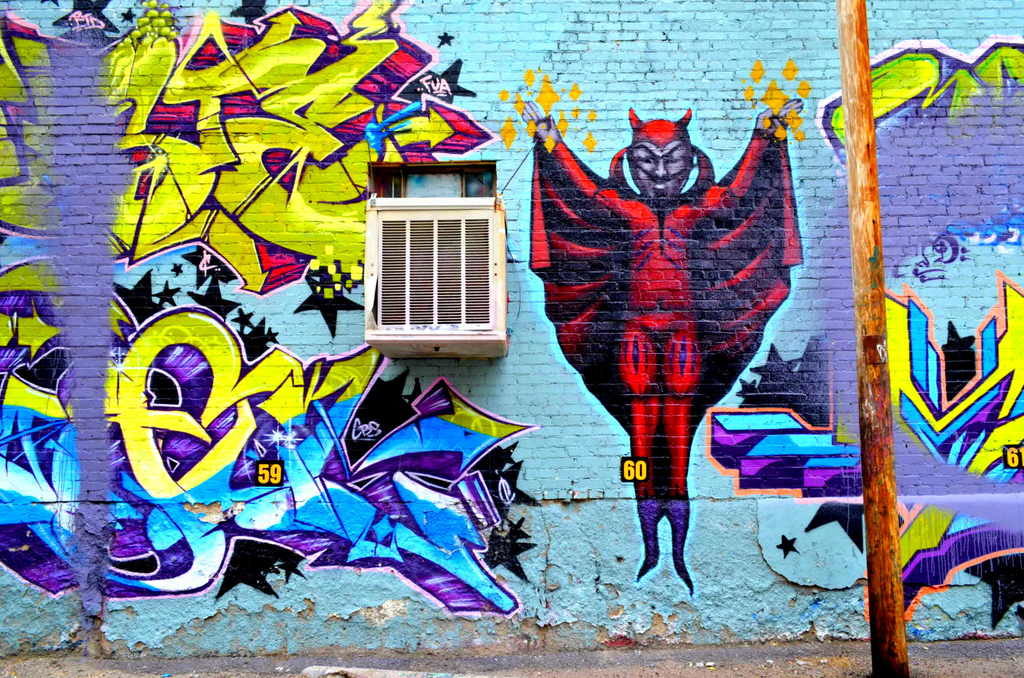