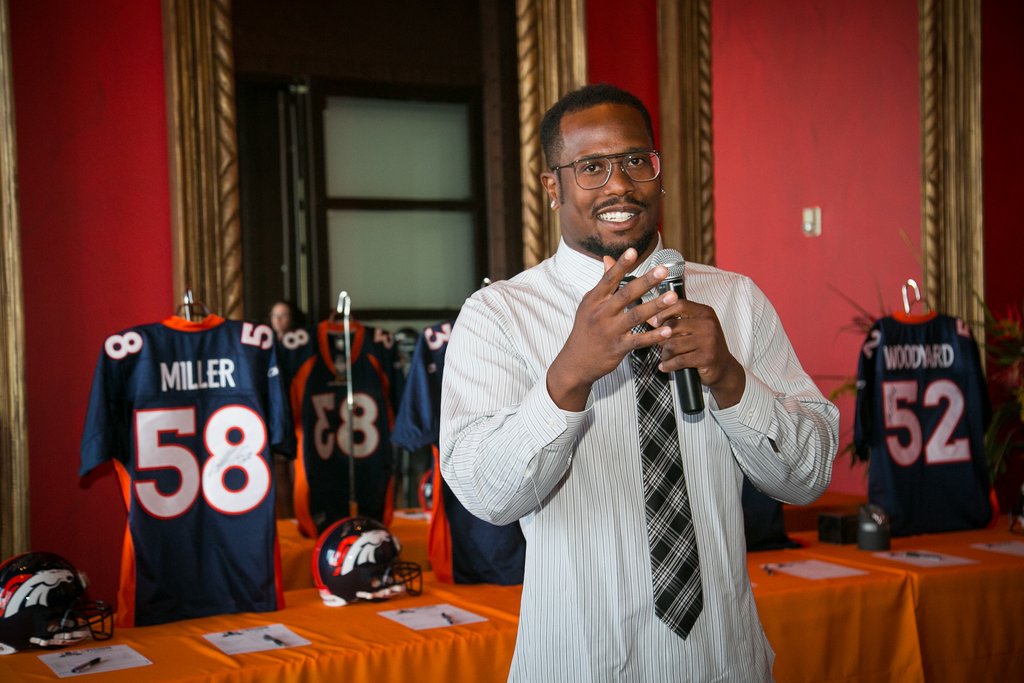 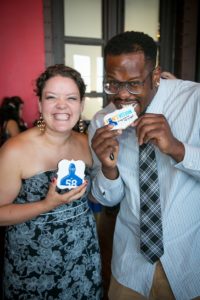 The entrance of the event space sparkled with orange and blue autographed jerseys as part of a silent auction. Tables were decorated with flowers and hand-crafted cookies displaying #58’s silhouette and signature vintage eyeglass frames. Guests had the opportunity to mingle with the All Pro and Pro Bowl linebacker– shaking hands, taking pictures, and signing autographs. The night was MC’d by the unmistakable booming voice of Denver Newsradio 850 KOA’s Mark Johnson. Johnson stated the startling fact that there are around 5,000 low-income first graders in Colorado that need assistance paying for eye exams and possibly corrective eyewear. Fitting with the giving spirit of the night Texas de Brazil presented Miller with a check for $3,000 — that is a lot of bifocal for your buck.

A native of the lone-star state, Miller’s charity aims to help Denver-area and Texan youth. The goal of Von’s Vision is to provide more than 50,000 children with eye exams and corrective eyewear by the end of 2016. While exact details for projects are not finalized yet — Miller could consistently be found saying: “The goal is to just get glasses on kids’ faces.”

This was the first official event for Von’s Vision, but donations began coming in long ago once Miller came up with the idea for his cause. Ubisoft, makers of hip hop video games agreed to donate $1,000 to Von’s Vision every time he performs the fan-appointed “Desoto Shuffle” dance after a sack. Sounds like a win-win for everyone – except maybe the quarterback who just had a 237-pound Miller train-crash.

Miller took a few minutes out of his evening to talk to 303.

303: A lot of children, both privileged and underprivileged, do not wear UV protection sunglasses when playing outdoor sports. As an athlete who has played football outside since childhood, how will you bring UV protection and eye care into Von’s Vision?

Miller: I try to wear a shield on my helmet when I can. All kids need eye protection outside — you know? It is something I am in tune with to get after. Von’s Vision plans to help all underprivileged kids’ eye needs.

303: A lot of times children do not want to wear glasses, even if they are helping them, because they fear being bullied. Aside from serving as a role model yourself, how does Von’s Vision plan on combating these societal norms that kids often fear?

Miller: I have been a geek all of my life so I identify with kids that go through this. I think it is changing so that it is cool to wear glasses. You see more and more famous people wearing glasses. If kids get the cool frames they like and see others wearing them, it changes things.

Approximately 80% of what we learn is taken in visually, and treating children early for vision problems is key in healthy development. So if you (like me) are blind as a Raven…I mean bat — without glasses you know how big a difference these specs can make. Stay tuned for future opportunities to donate to Von’s Vision, so that kids can see how awesome #58 is.