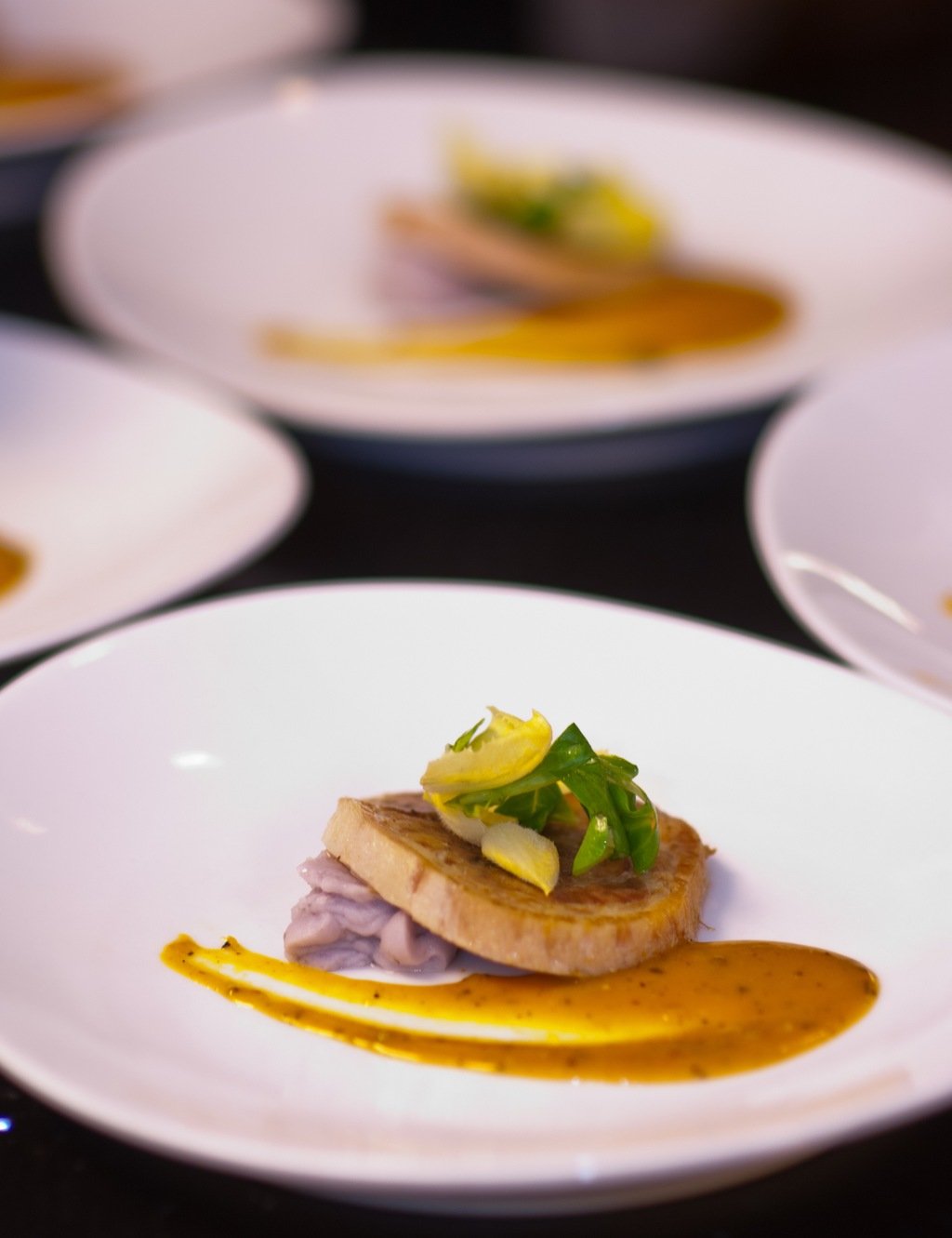 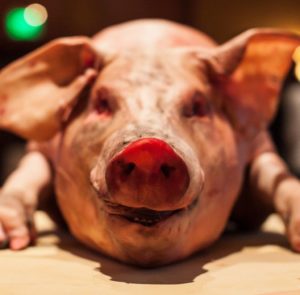 Five chefs, five pigs and five winemakers in a competition for a cause – that’s Cochon555. For the past five years, five chefs in ten cities pitted against each other in a ‘snout-to-tail’ menu competition featuring heritage breed pigs.

“There’s nothing better than fat. Fat is flavor. Fat rules. Fat is king….  Add fat!” so said the Reverand of Fat, Michael Sullivan, a Cochon555 competitor, all while stuffing a 65 lb. pig with herbs and aromatics and slathering on a coffee-colored rub all before putting it in the ground to be cooked.

The regional competitors spent a week preparing their menus and the winners were crowned the ‘Prince or Princess of Porc”. The final ten pig royalty will be competing in Aspen at the Grand Cochon event this weekend. The Grand Cochon is the finale to the year’s national culinary competition where the King or Queen of Porc will be crowned. Grand Cochon is part of the Food & Wine Classic held at the newly-renovated Hotel Jerome.

Cochon555 is the creation of Taste Network’s Brady Lowe in 2009 to raise awareness about niche farmers raising heritage breed pigs on pasture. As a result, 35,000 people have tasted heritage pigs – more than at any other event in the country; charities have received more than $300,000, and more than $500,000 has gone directly to great farmers across the country. For more details about the events, visit www.cochon555.com or follow @cochon555 on Twitter.

Eat, drink, and be merry and prepare yourself for a feast befitting any king or queen of pork.

Who’s Competing: The Princess and Princes of Porc  are:

What’s on the menu?

VIP guests receive early access to the event including quicker access to a tasting of the competing chefs in addition to experiences such as the all-new Tar Tare Bar presented by SIMI Winery, featuring Chefs Jamie Bissonnette of Toro NYC/BOS, Brian Busker of Matsuhisa Vail, and Phil Tanaka of Matsuhisa Aspen; as well as Rappahannock River Oysters, and reserve wines and spirits. The infamous Cheese Bar sees a facelift with cheeses from Cypress Grove Chevre, Vermont Butter & Cheese, Spring Brook Farm and an exclusive tasting of blues from Rogue Creamery.

In addition to the competition, Zwilling J.A. Henckels will present a butcher demonstration featuring Bill Greenwood of Beano’s Cabin. The butchered meat will be raffled off to benefit the students of Johnson & Wales.

By the “Vail Prince of Porc” Jason Harrison, Flame at the Four Seasons Resort Vail

Place pork belly skin-side down on a large cutting board. Using a sharp chef’s knife, score flesh at an angle using strokes about 1-inch apart. Rotate knife 90 degrees and repeat to create a diamond pattern in the flesh.

Toast peppercorns and fennel seed in a small skillet over medium-high heat until lightly browned and aromatic, about 2 minutes. Transfer to a mortar and pestle or spice grinder and grind until roughly crushed.

Season pork liberally with salt then sprinkle with crushed pepper and fennel, red pepper, chopped herbs, and microplaned garlic. Use your hands to rub the mixture deeply into the cracks and crevices in the meat.

Roll belly into a tight log and push to top of cutting board, seam-side down. Cut 12 to 18 lengths of kitchen twine long enough to tie around the pork and lay them down in regular intervals along your cutting board, about 1-inch apart each. Lay rolled pork seam-side down on top of strings. Working from the outermost strings towards the center, tie up roast tightly. Combine 2 tablespoons kosher salt with 1 teaspoon baking powder. Rub mixture over entire surface of porchetta.

If roast is too large and unwieldy, carefully slice in half with a sharp chef’s knife. Seal in individual vacuum-sealed pouches and refrigerate at least overnight and up to three days. If desired, porchetta can also be frozen at this point for future use (see note)

Preheat sous-vide water cooker to 155°F (68.3°C). Add pork and cook for 72 hours. Transfer pork to a sink filled with ice water and chill for 15 minutes. Remove from bag then carefully peel off congealed exuded cooking liquid and place in a medium saucepan.

Rinse porchetta under hot running water until all excess fat and congealed juices are cleared from surface, then carefully dry with paper towels.

Heat oil over high heat in a large wok or Dutch oven to 400°F. Carefully slide pork into oil using spatulas and tongs. (It will not be fully submerged). Immediately cover and cook, shaking the pan occasionally until sputtering dies a bit, about 2 minutes. Adjust flame to maintain consistent 350°F temperature. Using a large metal ladle, spoon hot oil over the exposed portions of the roast continuously until the bottom half is cooked and crisp, about 5 minutes. Carefully flip and cook on second side, basting the whole time.

Remove porchetta to a large paper towel-lined plate and blot all over. Season with salt. Let rest 5 minutes. Meanwhile, heat bag juices over medium-high heat until simmering. Add the butter and swirl until smooth. If center of pork is still hot, carve and serve immediately. Otherwise, transfer to a 250°F oven until warmed through, then serve.