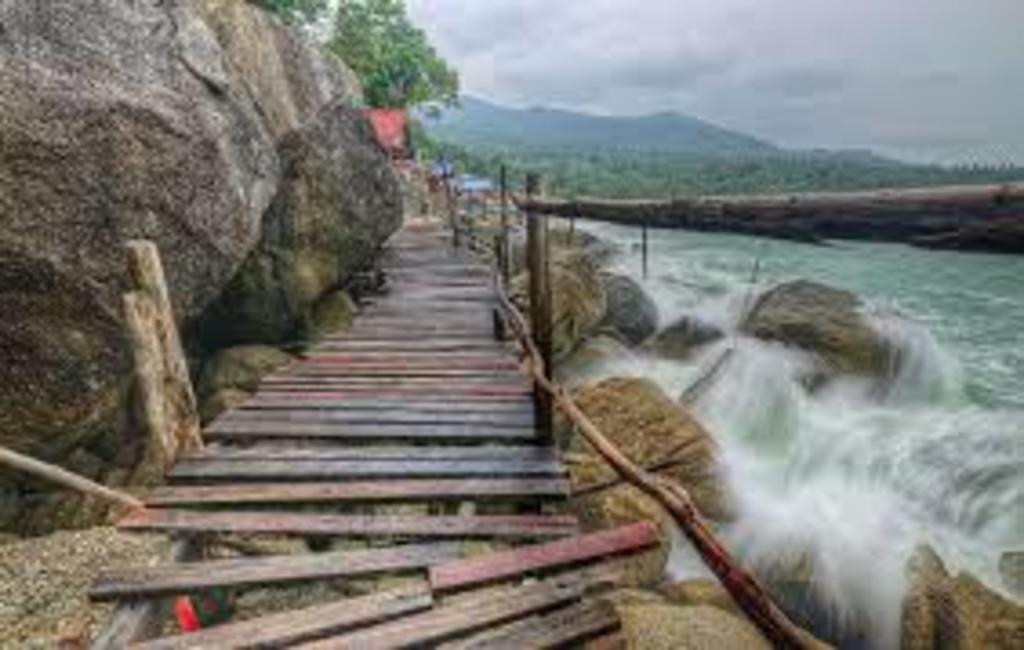 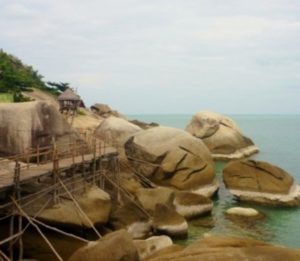 Haad Yuan feels like an island on an island. Accessible via short ride on a taxi boat or a long walk through the woods, it is just around the corner from tourist ridden Haad Rin (home of the Full Moon Party, incase you forgot), but it might as well be a world away. As the moon began to wane and the buckets ran dry, the Full Moon kids packed up their souvenir tank tops, washed off their neon face paint, and dragged their hung over selves toward the ferry to explore the rest of South East Asia, leaving Koh Phangan relatively calm in their wake.

It was once the dust settled that we made our way to Haad Yuan. We rented a colorful wooden bungalow at a guesthouse called Barcelona, which cost about 600 baht/night (about $18). Balanced high above the beach on stilts, its balcony privacy reinforced by shady jungle trees, the place was bright and breezy.

On the opposite side of the white sandy strip of beach from our hut was a massive outcropping of boulders and a rickety wooden boardwalk that seemed to be haphazardly nailed together and supported by bamboo beams cemented into half submerged rocks in the shallow sea beneath it. It wound around the boulders and was supplemented, at points, by stairs carved into the rock.  As you followed the splintered walkway, it snaked past some huts and floor cushions laid out on a smooth precipice of stone before coming to an abrupt halt at the most massive of the rocks, upon which was perched a gazebo that was a part of the Bamboo Hut restaurant (and guesthouse and yoga studio). Just past this lays Eden, where all night parties are thrown each Tuesday and Saturday. If you continue to follow the trail, which is marked by empty glass bottles half buried in the dirt, up through the huts behind Eden, you are rewarded with a vista view of the adjacent beach, Haad Thian, from the backyard of a Muay Thai training gym. The path continues up, over, and down to a resort called the Sanctuary, which boasts a unique (and expensive) menu full of healthy goodness. 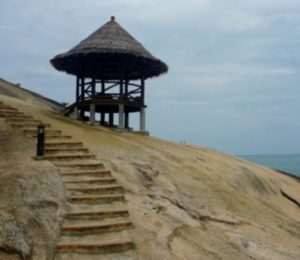 Haad Yuan has a real local flair and a vibrant cast of ex-pat characters who inhabit the beach. While women were also beautifully abundant, it was the men who really stood out. This batch of tribal tattooed, long haired, waxed and shirtless guys would gather to indulge in post yoga fruit shakes and spliffs at Bamboo Hut’s upper level deck that provided a panoramic ocean view from its floor cushions and low tables. Wearing Indian lungis wrapped around their waists, rose tinted aviators, and multiple rings blooming giant gemstones, these shiny men casually carried purses made of exotic textiles slung across their inked and muscled chests. They looked like they were “with the band.” They wore their hair pulled back in loose blonde ponytails and spanned all generations, although seemingly ageless. They appeared to be well traveled but perfectly at home. They came from no place and had no place to go, except for perhaps a dip in the ocean. They were the mermen of Haad Yuan.