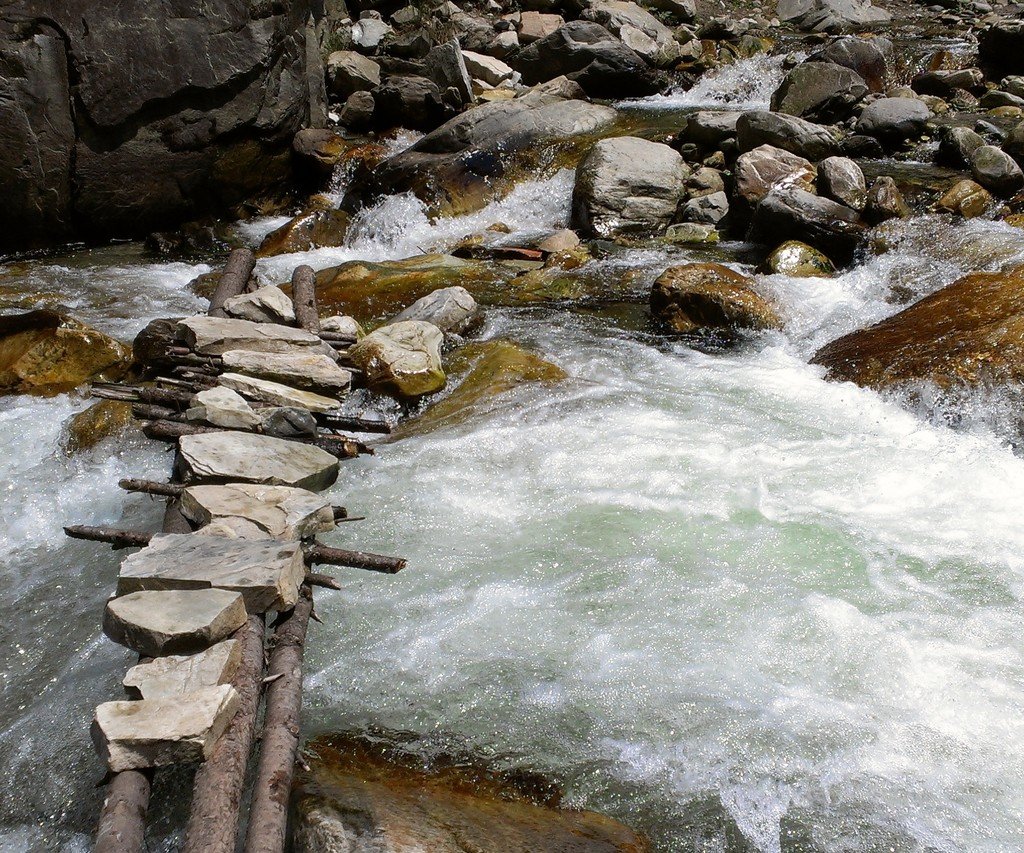 Our resident Israeli next door neighbor in our guest house in Kasol appeared one day at our door, flustered and desperate. He had just come down from the mountains and was dying for a hot shower, which we had the power to provide him with, as we were paying extra for the luxury of a private bathroom with a water heater. We obligingly granted this stranger his wish and as he emerged from our tiny bathroom, fresh and clean and juggling an array of toiletries, he gushed about the village up the hill from which he had just come from.

Grahan is about a three or four hour trek from Kasol. There are no roads there. As he animatedly described his ascent, he cautioned, “You must be very patient. Take many breaks.” He told us that there were a couple of guest houses and one store that was only open sometimes that sold biscuits and cigarettes. “It is a very peaceful place,” he smiled and thanked us about ten more times for the usage of the shower, claiming it was the best one he’d had in India.

A few days later, we stuffed our day packs with warm layers, salty snacks, and our toothbrushes and blindly headed off into the woods, knowing nothing of Grahan except for what our neighbor had briefed us on. We picked up a sweet and loyal dog friend en route, who proceeded to keep us company over the next three days. As fate would have it, we lost the original path quite quickly but continued to follow red arrows painted on rocks pointing towards a place called Thonja that no one had heard of. We traipsed straight up a steep and steady trail for the next three hours or so, stopping frequently to huff and puff, eat yak cheese and dried mango paste, and to refill water bottles at cold clear streams. As we went up and up, we acquired increasingly magnificent views of the looming snow-capped peaks on the horizon, but no one really had a clue where we were going. Moral was good, but it was getting later in the afternoon and if we didn’t come across a village soon… well, we would be out of snacks to say the least. 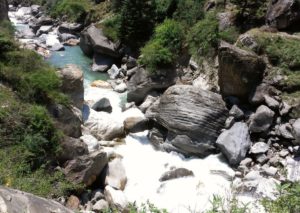 At last there was a brief level section of the trail that led us through an enchanted forest full of soaring pines that resembled northern California and displayed obvious signs of people. Stacks of carefully butchered branches were piled around the base of trunks, the kind of kindling you see woman porters carrying in baskets strapped across their foreheads. Emerging from the forest, we caught a glimpse of distant buildings clustered on the hillside.

Before we saw people, we saw goats. Tons of goats. Grandfatherly and gray with fuzzy mops of hair and orange matted beards. Muppets with blank stares and shaggy coats. The babies are arguably cuter than puppies as they bounce around and butt into one another playfully. They roam the hillside, defying gravity and blurting out pleasantries to one another.

Then there were cows. Not mangy, haggard cows like in Rishikesh or Goa. It was apparent that someone loved these cows. They eat grass, not trash. Women followed the cows, whacking at them with skinny sticks and yelling at them in high pitched voices. The women have heavy scarves wrapped around their heads and wear what appears to be giant burlap blankets tied into overall dresses (“Not very flattering for the waistline,” my boyfriend observed). They wear big gold studs in each nostril that practically cover their entire nose. They knit colorful socks and work on looms outside of their homes.

The men of the village were all similarly outfitted in tattered wool blazers, sweatpants, and slip on sandals. They wear a variety of topis that often have a gray wool base and multicolored decorative stitching across the front forehead part.

But it’s the village kiddos that really brought the place to life. The first onslaught of kids wore dazzling school uniforms and were playing on the outskirts of town. The adolescent girls had their hair in pigtail braids, tucked under into loops. Thrilled to be able to show off their English language skills, each kid approached us with an outstretched hand, looking for a shake- which is a wholly foreign motion for them, as Indians typically clasp their hands in prayer position and bow their head as a greeting. “Hello! How are you! What is your name!” they each took turns announcing. When the school children had exhausted their English phrases, one young boy stepped aside to let us past them, commanding, “Go,” with a wave.

Next we were bombarded by a younger bunch of snotty youngsters upon entering the village proper. They were falling apart at the seams: loose sweaters full of holes, rubber boots with toes and heels peeking out, crass haircuts, crusty faces. And they were adorable and excited to welcome the new comers by insisting we take about forty photos with them before proceeding.

We had managed to approach Grahan from above, which was much more rewarding, instead of taking the more well-traveled and much easier route (which we had originally intended on). In the end, we took the easier path home and were pleased to find it brimming with purple orchids and pink roses and meandering casually along the shady banks of the freezing cold river.

Grahan smelled of new wood. Its small gutter-lined streets wound between two story homes with windowed upstairs, showing off meticulously cut and scalloped framework. Horses with closely cropped coifs clomped through, piled high with heavy sacks slung across their smooth backs. There were several ornate temples with padlocks hanging on their doors. The alleged village “shop” was never actually open. This children could be heard singing and reading aloud in the mornings at the modest schoolhouse that was situated just above our family-stay guest house. We were the only ones inhabiting this space and were never even issued locks and keys for our rooms. Why bother?

We ate thali, which was chock full of local rajmah, and listened to B.B. King and played Chinese poker and soaked up the panoramic mountain view. The following day we took an excursion to several nearby waterfalls and met Grahan’s mayor, who was a well educated and worldly man who happened to be carting a basket of dirt on his back and was heading towards the fields to work, which was something he hadn’t done in years and years. He boasted an impressive resume in articulate English, ranging from flying planes for the Indian Army to being a ski instructor. He took time to correct my friend’s beginner Hindi phrases she had been cultivating and pointed out all of the items in his family’s garden to us. He spoke of the importance of travel and experiencing places and encountering people as guests and not as paying customers. Then he invited us to his house for dinner. And we exchanged Facebook contact info before departing, of course.

People in Grahan were sweet and welcoming, smiling and greeting us with “Namaste” as we passed curiously by. There were maybe ten to twelve Westerners in Grahan that we encountered while we were there, including ourselves. The place seems to be up and coming though, with construction projects blossoming across the sloping landscape. Hopefully Grahan manages to keep its charm due to its remoteness and stays out of the way of guidebooks’ recommendations in the future, but many of the villages around here seem to be on the To Do List for visitors, however “off the grid” they seem. 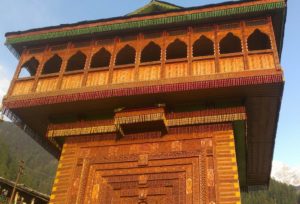 Another nearby village called Rasol is about two and a half hours walk towards the other side of the valley. We took a stroll up there and spent a few nights after we had returned from Grahan. Situated nearly on top of the peaks that rim this section of the valley, Rasol’s local roads are severely steep. While it is significantly closer to Kasol and therefor its several shops are thoroughly stocked with products, there is no school house in sight. The weathered women looked mildly irritated by our presence and the men refused to acknowledge us at all. Children paraded after us with outstretched hands calling for, “Chocolate? Money?”

Um, what? Did these little mountain children just ask us for money? Yikes. Where do they learn this from?

Our fire-staff spinning American friend we had made the trek with repeatedly mentioned that the child mortality rate in this area was staggeringly high, as we watched the kids nonchalantly chase each other barefoot across rocky precipices and patios that end abruptly at cliff faces.

A young Goan man named Vilan and his girlfriend were temporarily running a guest house in Rasol. They have been there since November after making the life altering decision to quit their jobs in Bombay, as an interior decorator and a flight attendant respectively, to live a simple life in the mountain village where they had spent the past several years vacationing. Vilan explained to us how nearly every green plant you can see in the valley is edible. The national plant, the rhodedendran flower, is made into a richly colored, faintly sweet juice that is preserved with a dash of lime and flavored with a hint of cinnamon. “Potatoes, mint, cannabis,” he nodded towards the garden, all the while preparing a chillum. “Even the spiky ones are made into a chutney.”

Vilan also painted a vivid picture of the village people for us, explaining how most of them- although not so far away from Kasol- don’t even realize that flat land exists anywhere. Rasol is their life. It is what they know. They haven’t a clue what the sea is. He spoke of the winter and described how when it snows and you get up to use the bathroom in the nighttime, when you come back inside you have to chop wood in order to light the tandoori (wood burning oven) just to go back to sleep.”

Charras keeps the stunning Parvati Valley booming with business. Just an overnight bus trip from Delhi, Indians also flock up here for weekend holidays to escape the charade of city life, chill out, and have a smoke. And whether or not people come for the drugs or the views or the trekking, Kasol provides an all too comfortable hub to post up on a balcony and stare down the mountains (even though we suspect a conspiracy amongst the money exchanging travel agents to intentionally make sure that the only ATM in town never works). Whether or not the presence of Westerners is positive or negative for the remote mountain folk and their simple villages is still up in the air.

In just a few days, I’ll be trading in the Masala for Massaman and bidding India a fond farewell for now. Two days and five modes of transportation later, we will be making the commute from the shanti Parvati Valley to bustling Bangkok. In the meantime, I’ll be savoring my final cups of chai and the chilly mountain evenings and mentally preparing for air conditioned Thai spas, slurping chilled coconuts, and the steamy humidity of early monsoon season in South East Asia. Bring on the culture shock.