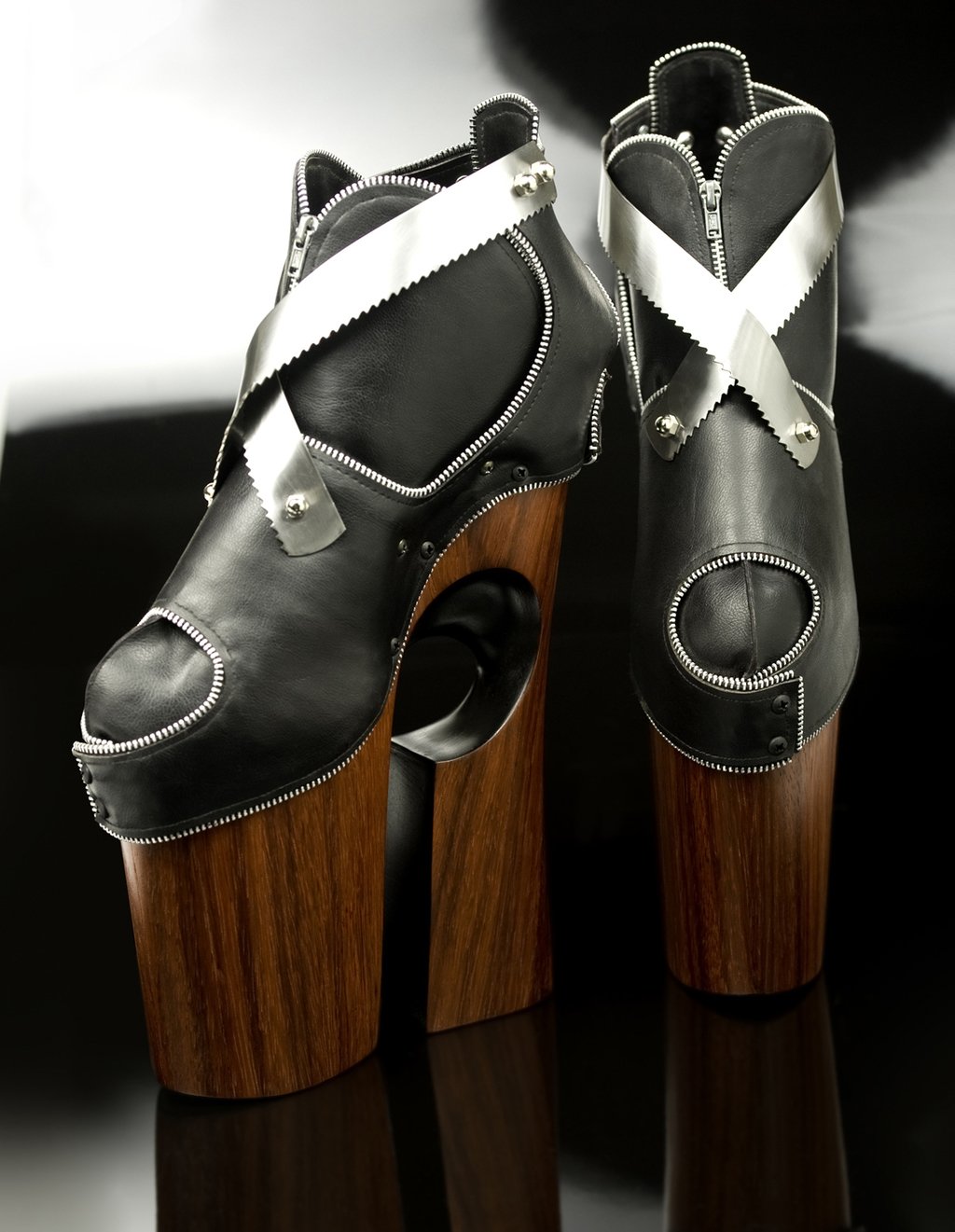 Beauty Is Pain: The Stilett“O” Series by Omar Angel Perez 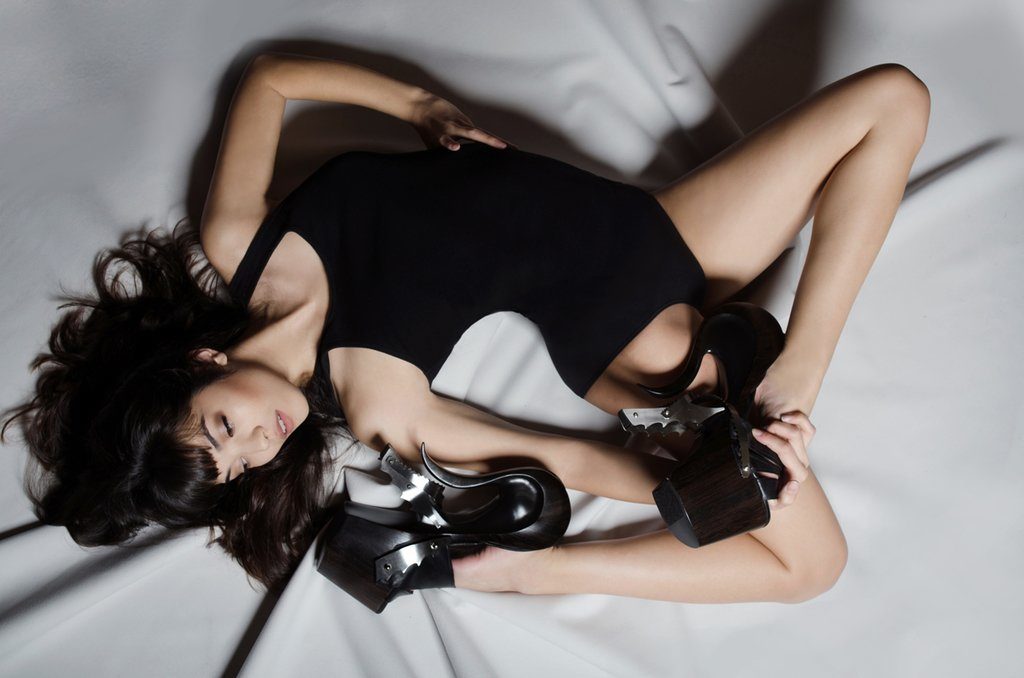 High heels, pumps, stilettos, sadistic torture devices—whatever your perspective about the high heel shoe—love them or hate them—women and men have been falling head over heels (most often literally) for this aptly named shoe, eponymous for the stiletto dagger, since the 16th century royal court.

Fashions oscillate between extremes and Houston-based artisan Omar Angel Perez, let’s just say, takes the stiletto heel to the absolute extreme, although he would debate what absolute means since he is always coming up with another wilder idea to top his last (try one of his three-foot-tall Stilett“O”s on for size).

Born into a family of artists, Perez grew up watching his father hand carve his toys and his mother paint and sew. It inspired him to take up furniture woodworking during college when cinder block furniture no longer cut it. If he couldn’t buy what he sought after, he would build it. And, so he did. He took to homebuilding sites to scavenge scraps and began his now nearly 20-year career with woodworking.

Woodworking usually conjures up antiquated pictures of old men—maybe even your granddad—outside in the backyard garage sanding wood in his dusty overalls, but the craft is alive today despite the stereotype, and Perez is one of the artisan’s breathing new life into the craft, remarking that he likes to “Keep it fresh.”

Using meticulous hand carving, veneer work, exotic woods and unconventional materials like saw blades, Perez is keepin’ it fresh with his Stilett“O” series: a collection of 60-plus sculptural art forms based off of many a fashionista’s shoe fetish.

“Furniture, fashion, the high heels, sculpture … it all evokes an emotion. It’s all very much the same thought process.” — Omar Angel Perez

The sky-high sculptures (made in both pairs and singles) have been featured at the Houston Center for Contemporary Craft, the Adelle Briscoe Looscan Neighborhood Library and the Fuller Craft Museum. And this month his groundbreaking designs will be featured in Germany at the Grassi Museum’s newest installation, a shoe exhibit called “Stepping into the Limelight!” exploring one-of-a-kind shoe design from 100-plus international artists.

To his new endeavor (just three years in the making), he brings a career of sculptural studio furniture making, which he continues to pursue.

Perez works along two wavelengths whether it’s a project of the footwear or of the furniture variety: functionality and emotion.

The emotions his Stilett“O”s evoke, he said? Sexiness. Theatrics. Darkness.

“High heels do something to a lady, and you can attest to this more than I can, but it’s an emotion; it does something to a personality,” Perez said.

Stilettos give the illusion of height, slenderness and smaller feet. With their tilt they adjust posture and gait in such a way as to create a more upright carriage.

It’s been no secret to Perez’s buddies that he has a deep appreciation for a woman in high heels. It was this longstanding joke that instigated the first pair called “My Shoes Are Killing Me.”

“I wanted it to be really beautifully made and [using] exquisite materials, but also tell a story, ‘Man, I really appreciate what you guys do by wearing these things’—kind of an ode to women, what they do, and the extremes they go to just to please us guys. Well, there you go, thank you, really.”

And Perez has wooed the fashion world with his tributes. His designs have captured the hearts of shoe-loving fashion photographers, charities with an affinity for fashion, men who gift them to their wives, women who covet them as a unique sculpture for their homes—even Lady Gaga’s stylist recently commissioned two pair.

What his followers may not realize is that the Stilett“O” series is a soft-sell appeal to women to lure them into the world of woodworking, a historically male pursuit.

“Woodworking has always been an old … guy thing, what your grandfather did in his workshop making a chair or something,” Perez said. “What I enjoy with the work that I’m doing: I enjoy introducing more women to woodworking and techniques and how beautiful it really can be.”

Perez brings an artisanal repertoire of skills to his approach beginning each project—furniture or Stilett“O”—with an untouched block of wood, which is then manipulated with hand sanding and carving.

Taking cues from fashion great Tom Ford, Perez crafts his way to a stiletto heel—something that has been done season after season, yet he finds details to alter to make it his own.

“It takes a lot of time and mastery to take something that has been done over and over again and to make it fresh and creative and different, but still again usable,” Perez said. “That’s one real interaction between furniture and fashion that I see. The real masters do things that are different, but they still do what they’re supposed to do.”

The love affair human beings, especially women, have with their footwear is a fascinating one, like the mystery of why we opt to wear shoes designed contrary to the natural functioning of the foot.

“I think it’s just as much men’s fault as it is women’s fault,” Perez said. “We either appreciate it, or we don’t know we appreciate it, but there’s something about them that we like. Women play off that. They will go to the extremes to please, I suppose.”