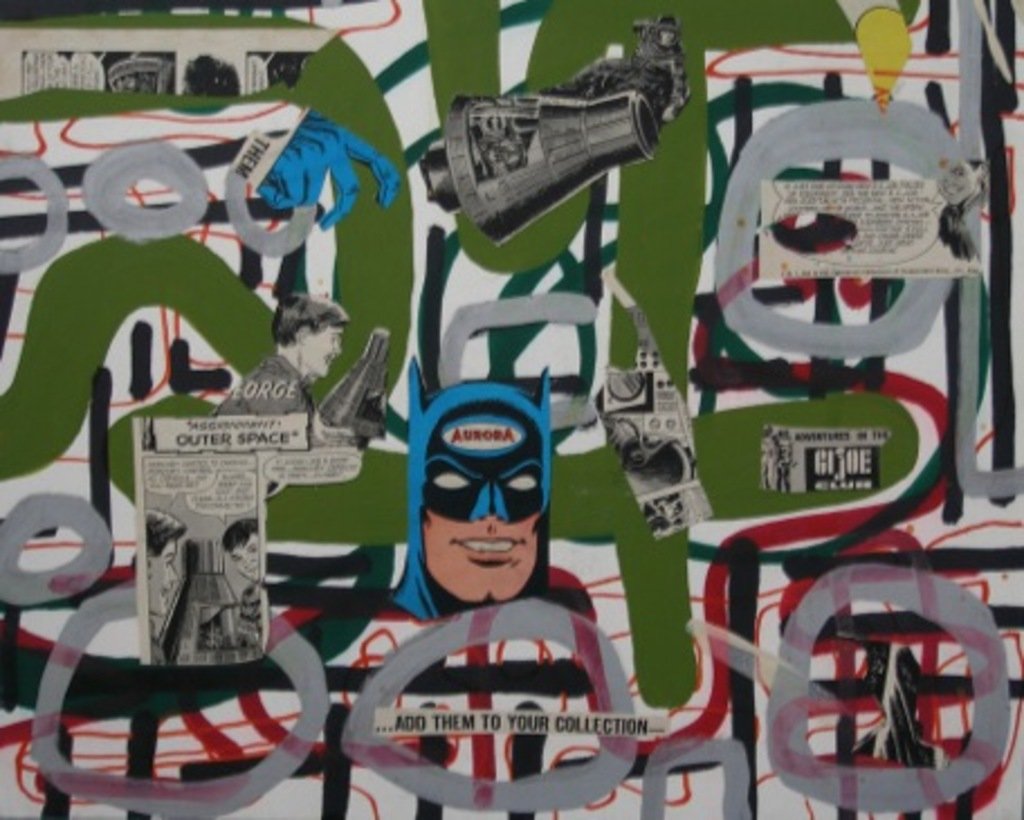 My City, My People, My Hope, My Shame, My City

A month before the Aurora theater shooting at a screening of The Dark Knight Rises, Denver-based artist Tim McKay was working on a mixed-media series about societal expectations for boys using covers from 1960s comic books. 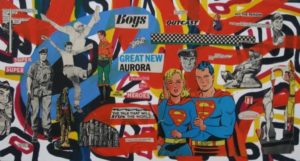 Out the Reason (Aurora #4). Photo courtesy of the artist.

The back cover of one of his comics was an advertisement for Aurora Plastics, known best for their collection of superhero model kits. McKay completed a piece in which their logo was pasted on the head of Batman, placed it aside and forgot about it.

A week after the shooting, while cleaning his studio, McKay found it again. After going through his collection of comics, he found more advertisements for Aurora Plastics which inspired him to create seven additional pieces that expanded upon his coincidentally cross-sectional theme.His completed exhibit, “My City, My People, My Hope, My Shame, My City,” is now on display at SYNC Gallery in the Art District on Santa Fe and will be open to the public at tonight’s opening reception from 6 – 9 p.m.

Each individual piece, composed of a single comic book cover, archaic advertisements and public service announcements, alludes to some aspect of the theater shooting and asks viewers to reflect on their own thoughts and feelings of the tragedy. There are aspects related to the shooter, movie-goers, rescue workers, and the media which evoke strong imagery of hope, loss, revenge, and death.

Like many Coloradans, McKay says the Aurora theater shooting felt all too familiar, picking at the scabs left behind in the wake of Columbine. He felt ashamed that he had not taken any concrete action to support changes in Colorado gun laws.

“When I found the Batman piece, I was stunned,” says McKay, “I believe that, given a safe place, people can come to their own conclusions about how to live well in light of difficult circumstances and that reflects my approach to this body of work.”

His exhibit, named after lyrics from a song by The Flobots, is a call to both remember and act. A portion of the proceeds will be donated to flobots.org to support programs, like the Denver Housing Authority’s Youth Media Studio, which provide mentoring and training in arts-related skills to at-risk youth.

The rest of the exhibit is filled with some of McKay’s more abstract and non-representational work. Varying in structure and energy, these pieces emanate a different feel and are intended to serve as points of reflection for gallery visitors.

Drawing from theory and practice of his other professions, McKay says he aims to bring people into greater connection with themselves, others, and society at large by applying these lessons to his work as an artist. 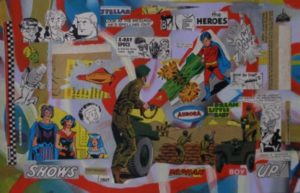 BE the Heroes (Aurora #6). Photo courtesy of the artist.

He’s done just that with “My City.”

The start of a new year is not just a time of individual resolutions and vows, but also a time for communities as a whole to come together and reflect.

McKay’s artwork will force fellow Coloradans to address any lingering sentiments regarding the Aurora theater shooting and contemplate the social implications that occasionally manifest such tragedies – all while supporting a great cause.

McKay’s exhibit will be on display at SYNC Gallery until Jan. 26. He will be back in the studio to hold an artist talk and community conversation on Jan. 19 at 1 p.m.

If you can’t make those dates, don’t fret. Some more of McKay’s work will also be featured at “Art of the State,” a juried exhibition of Colorado artists, at the Arvada Center for the Arts and Humanities starting Jan. 24.