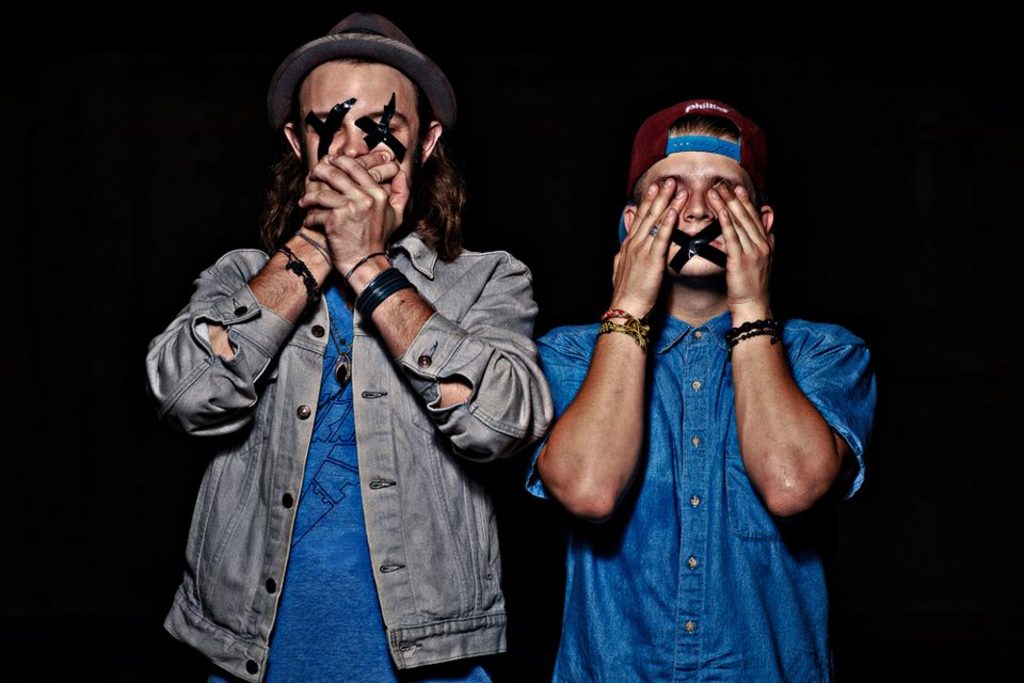 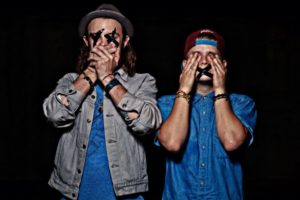 After touring extensively through Colorado over the past year, Elm and Oak artists, Cherub, have continued to win over Colorado music fans with their rowdy live performances and tongue-in-cheek lyrics. Working off Reason 4 and Abelton, the pair incorporates live vocals, talkbox and guitar into their energetic live shows, creating a brand of electro-pop so infectious, even the staunchest of critics can’t sit still. After playing SnowBall Music Festival in Avon, CO last March and opening for STS9 at Red Rocks earlier this summer, Cherub will make their way to Denver Saturday night to headline Bluebird Theater.

This fall, the Nashville duo, Jason Huber and Jordan Kelley, will celebrate two years performing as Cherub with their nationwide “Champagne and Satellites” tour with Mansions on the Moon. Kicking off their tour with a three-night run in Colorado, Cherub will bring their self-described “sexy, avant-garde, electro-pop music from the future” to more than 20 cities, starting in Aspen, CO and ending in Charleston, SC. Huber and Kelley chatted with 303 Magazine about filming their latest video, getting busted on Facebook, music festival survival tips, their love for Mariah Carey, and working with Dominic Lalli of Big Gigantic.

303 Magazine: You’ve played in Colorado multiple times and your fans here love you. What is it like playing in Colorado and where do you guys spend time when you visit? Any memorable moments from this summer?

Jordan: Colorado has been a second home to us! Being involved with Elm and Oak so early on in our career and having them introduce us to so many people in Boulder and Denver has made it such an awesome place to play shows. My most memorable moment so far is playing at Red Rocks this summer with STS9. We always have to stop at Jiberish when we are in town too, so we can look cooler than we did before we stopped at Jiberish.

Jason: My favorite memory from this summer is putting my foot up on the railing at Red Rocks and having a full on viking-at-the-top-of-the-mountain-in-a-thunderstorm rock ‘n’ roll moment. That was the most epic moment of my entire life. I always love getting bomb breakfast food in Denver or Boulder.

Jordan: I love Linger and Snooze. Snooze has bomb-ass mimosas!

Speaking of mimosas, you just debuted your video for “Doses and Mimosas.” Looks like you had a blast filming. What was that experience like?

Jordan: We met so many awesome, easy going people during our stay in NYC. Sam Pattillo, who runs Community 54 in Manhattan, and Brooklyn/Austin-based director, Aaron Vasquez, were the main reasons why the video turned out so awesome and rowdy. All of these people came together and helped us throw a party each night we were there, and Aaron was able to edit the footage to make it fit with the song. Everything about that whole experience with the video was perfect and nothing was forced.

Jason: The concept behind the video was to fly into NYC and film all of the shenanigans that went on over the few days that we were there. The video pretty much tells the whole story. Things got delightfully weird in all the right ways. Big thanks to Community 54 and W Hotels for everything.

Conceptually, it’s a big departure from “Love You Right,” one of your first videos. In that video, you guys get the shit beaten out of you by two girls. Whose idea was that?

Jordan: Our moms hate that fucking video so much! Jason and I knew if we made a video for the song and had it depicting the lyrics, it wouldn’t come off how we wanted our first video to come off. So, we basically just made a video with completely opposite visuals to entertain us. Some people really like it and get it, and some people really hate it. I’m just stoked that I will forever have a video of me getting my head smashed in by fine-ass girls on the internet.

Jason: Well, the fact that we shot the video for a whopping budget of $5 for fake blood and a flight from Lincoln, NE to Nashville, also dictated how we shot things.

You spent most of the summer on tour and playing music festivals like Bonnaroo and Hangout Music Festival. What are your top five tips for surviving a festival?

1. Rent an RV or become best friends with someone who has an RV
2. Eat breakfast
3. Drink a lot
4. Don’t say no, just say yes
5. Make lots of friends

1. Drink champagne
2. Use Goldbond
3. Bring more fresh socks than you think you will need
4. Give up on a schedule and sleep
5. Keep a very open mind and get weird

One of the perks of touring and playing at music festivals has to be that you meet so many amazing people. Who are some of your favorite people to tour with?

Jordan: We love the dudes from Machines Are People Too! They are super cool and the drummer Ivan and I are Facebook-official boyfriends, so that’s special. We never got to tour expensively with Big Gigantic, but they have been like big brothers to us. It is super awesome and humbling to share the stage with such amazing musicians. Hopefully, we will be getting some dates with our homie GRiZ soon.  He’s a super cool dude who makes amazing music.

Jason: This current tour with Mansions on the Moon is going to be pure bromance! Recently, we got the chance to play with one of my favorite bands ever, Annuals, and that was a magical night for us.

What was it like working with Dominic Lalli of Big Gigantic on “Hold Me?”

Jordan: Dom is the man, hands down! He is such a talented dude and we were so stoked to have him rip a sax solo on our album.

Jason: Dom is such a pleasure to work with. It all started at a late night jam in a backstage tent at Electric Forest two years ago. The entire process of tracking and mixing his part for “Hold Me” from across the country was a breeze. The whole thing came full circle when Dom and Jeremy [Salken] joined us on stage at Electric Forest this year. Magic!

Who else would you love to collaborate with?

Jordan: I want to do a collaboration with Mariah Carey and The Dream on some super pop shit, really bad. I would love to do a sexy-ass vocal duet with Pharrell Williams and make a really melancholy slow jam with Jon Brion. And I would have Prince have a guest appearance on a song, but it would just be him ripping a fucking huge, epic guitar solo at the end of the track. That would be epic!

What other artists are you listening to right now?

Jordan: Todd Terje, Niki And The Dove, When Saints Go Machine and AlunaGeorge. AlunaGeorge tracks get stuck in my head and never leave. I wanna go on a fucking tour with them!

You guys aren’t shy about your vices and often reference them in your songs. What are some of your other vices that you don’t mention in your songs?

Jordan: All food I eat must be extremely spicy. My secret vice is spice. Thanks for helping me come up with new song lyrics!

Jason: I don’t do vegetables. Other than mac ‘n’ cheese and mashed potatoes. Yes, those are vegetables in the South.

You guys also aren’t shy when it comes to posting on Facebook and Twitter. Have you ever gotten into some trouble because one of your posts?

Jason: We posted a picture of our bare asses out on a rooftop in NYC last summer to our Facebook page and we had our entire page removed. It’s actually quite hilarious. The picture is still out there on the interwebs somewhere. We dare you to try to find it!

Jordan: At this point, with the content in our songs, we aren’t too worried about offending our fans. They are pretty much the coolest, rowdiest, most open-minded people ever.

Jordan: Jason does all the tweeting for the most part, so I’m in the dark about a lot of it. Dirt Nasty hit us up the other day and put up links for our “Hold Me” video and “Doses and Mimosas” video which had us stoked!

What do you have coming up after your fall tour with Mansions on the Moon? Have you started working on any follow up material to MoM and DaD?

Jordan: More shows! Always more shows! We definitely will have new music out before the end of this year, and plenty of collaborations that we are excited to release, as well. I just released a side project with my favorite artist of all time, Natalie Prass, called Melontropics. It’s available for free download at RCRD LBL.

Jason: We have all kinds of tricks up our sleeves. Collaboration EPs with a handful of different artists, like the Melontropics EP Jordan recently released, more videos, and more new material. We have been touring so much recently that we are brimming over with creativity and starting to stockpile new material to be released soon!

Cherub headlines Bluebird Theater on Saturday night with Mansions on the Moon. Flashlights opens. Doors at 8 p.m Show starts at 9 p.m. Tickets are $15.50 online or $17 at the box office.