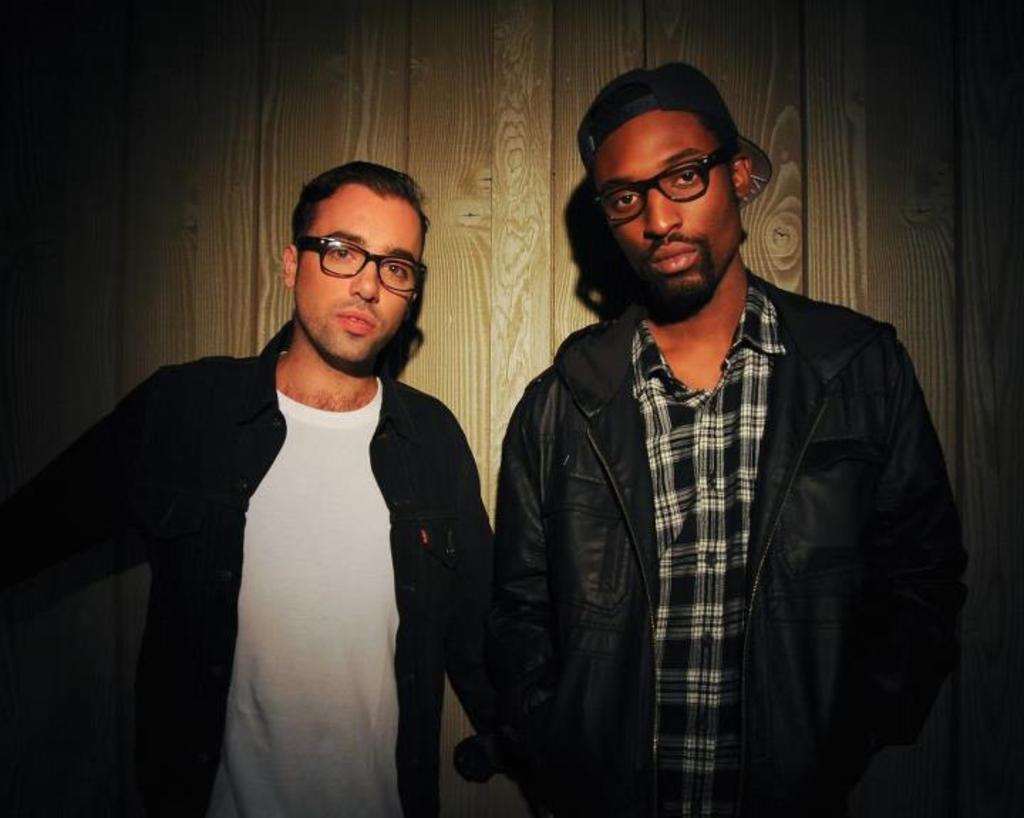 “We were never planning on being signed artists,” says Ben “B-Roc” Ruttner, one-half of electro powerhouse, The Knocks. “We always thought we would just produce other people’s music and be in the background.”

Ruttner couldn’t have been more wrong. Alongside James “JPatt” Patterson, Ruttner is responsible for some of the most memorable and successful original tracks and remixes in electro music. The pair has remixed everyone from Britney Spears to Santigold, and in turn, has been remixed by legends like Fred Falke. They’ve played nearly every major music festival and shared the stage with artists like Deadmau5, Tiesto, Calvin Harris and M.I.A. Currently on tour with Canadian trio, Dragonette, The Knocks will play a live set in Denver tonight at Larimer Lounge.

Ruttner spoke with 303 Magazine about the duo’s backup dancers, The Knockettes, how they spend their days off, his thoughts on Dubstep and Trap, and their upcoming tour with Boulder-based artist, Paper Diamond.

303 Magazine: You guys are in the middle of your nationwide tour with Dragonette. How are things going?

Ruttner: It’s been really fun so far. Touring with Dragonette has been great. We have a fun time and our sounds really complement each other. We have a very similar fanbase. It’s our first time being on a tour bus, which is interesting. You play a show, you get back on the bus, pass out, and wake up in a new city.

You’ve only toured with leading females – first Ellie Goulding and now Martina Sorbara of Dragonette. What’s the dynamic like touring with a  frontwoman and a mostly male crew?

It keeps things interesting! Martina is the only woman on the bus, everyone else is a dude. She’s such a powerful frontwoman and then on the bus she’s kind of like the mom.

As you said, you normally go from one city to the next when you’re on tour, but you had a day off in Chicago this week. How did you spend it?

I wish I could say we usually do this on our days off, but we checked out a nature conservatory. We don’t normally do such wholesome things. Usually it’s a lot of smoking weed and partying. It’s dangerous anytime we tour on the East Coast because we have friends there and we just end up partying. But now that we’re off to the Midwest, we don’t know as many people. Hopefully it won’t be as debaucherous and we can take a break.

That’s debatable – you haven’t made it to Denver, yet! So, you guys just played Webster Hall in NYC, which has become the “go-to” place for EDM and dance shows. What was it like playing there?

It has sort of become a legendary venue for anyone living in NYC. It’s kind of the cool downtown venue and it has definitely become more danced-based over the past few years. We played our first live show there, and we’ve been back to DJ and play other shows. We played at Webster Hall the first time we played with Ellie. It’s probably my favorite venue to play at in NYC. We’ve played Terminal 5 before, but there’s just a different, special vibe at Webster Hall.

I saw your backup dancers in photos from your show at Webster Hall. I dig the matching leopard bomber jackets! Whose idea was it to have backup dancers? Do they tour with you?

I wish! I think when we go on our own tour we’ll take them with us. They are professional dancers who live and work in NYC. It was my idea, actually. We wanted to switch things up during our live performances and make it different. They perform at all of our NYC shows. We call them The Knockettes.

What’s the best and worst thing about touring as much as you guys do?

The best thing is traveling all over and getting to meet new people. It’s cool having experiences with people all over the world. But the bad part is getting homesick. We love living in NYC and we have so many friends in NYC that we get FOMO. Sometimes we just want to be with our friends in NYC and not on a tour bus in the middle of Kansas.

Your name comes from when you guys were first starting out, when neighbors would knock on your door and tell you to turn your music down. What was it like dealing with your neighbors in that building?

When we first moved in, our neighbor was in the music industry, so she would come by and hangout. After she moved out, things just went downhill. One time the lady from upstairs came down and complained because she was sick and asked us to turn down the music because we had been producing all day. But we had to have our music that loud to produce properly so we were just like, “Uh, sorry, we can’t.” It’s cool, though, everyone we lived with in that building helped our creativity in some way.

My favorite remix that we’ve done is the remix of Santigold’s “The Keepers” we put out recently. And I love our remix of “Let It Go,” Dragonette’s last single. That’s actually how we got on tour with them, because they liked the remix so much.

I really love Fred Falke’s remix of “Brightside.” He’s just such a legend and it was an honor to have him remix us. I also really like Edwin Van Cleef’s remix of “The Feeling.” He’s a really young dude from the UK. He’s one to look out for. We always try to support up-and-comers – we always have our ears to the ground to catch people before they are household names.

Edwin Van Cleef’s remix is on your new The Feeling EP, which also features remixes of “The Feeling” by Lazerdisk Party Sex and Seamus Haji and Com Truise’s remix of “Learn to Fly.” Did you intend to put out a remix EP as your follow up to 2011’s Magic?

At first, we wanted to release an EP of five new original songs, but then we decided we wanted to stick with a dance-based formula and we really wanted to get “The Feeling” out already. We were really happy with the DJs we got to remix our songs. I think my favorite is the Lazerdisk Party Sex remix. I was happy that we were able to get this EP out so quickly, too. Sometimes when we work on our own stuff we can be so flaky when it comes to getting things done on time [laughs].

“Brightside” and “Dancing With The DJ” have been remixed and sampled by nearly everyone. Did you expect these tracks to blow up the way they did?

I don’t think we ever anticipated that these songs would be so successful. We were pleasantly surprised, and still are. “Dancing With The DJ” is still getting remixed and people are still just finding out about it. I think that’s a great example of a good song. We made it two years ago, but it’s still relevant now. That really is the mark of a good song, I think. I remember when I heard [Foster The People’s] “Pumped Up Kicks” over two years ago. I thought it was such a great song and then two years later it blew up. I think it’s all about a long, steady build over time. Not just what’s just hot at the moment. That’s what makes a song a classic. We try to have that vibe in our songs. We want our songs to be classics, not just what’s hot at the moment.

Walk me through your musical timeline. How did you get into music?

I grew up with parents who were huge music lovers, but no one in my family was a musician. I grew up wanting to be a musician and tried to play just about every instrument. I started with guitar and then got into drumming and played in a bunch of shitty bands. That led to production. I started making beats and I got into hip-hop. For a long time, I wanted to be a hip-hop producer.

With James, he stared playing the organ and drums in church. His dad is an amazing jazz musician. Growing up, I listened to a lot of classic rock and then hip-hop, which eventually translated into producer-based stuff, like DJ Shadow and Fat Boy Slim. We use a lot of our past influences in our music now. You might hear something of ours that sounds a little Motown – that’s James, or a something a little like Daft Punk, which is from me.

EDM has sort of taken over the US over the past few years, but the subgenres are still very regional. Electro still rules in NYC and Dubstep is huge in Denver, for instance. Are there any EDM subgenres that you don’t care for?

I don’t hate Dubstep, but I don’t think I would ever produce it. There are some amazing Dubstep artists – like Nero and Skrillex – but I think it can be such a simple form of dance music, which is why everyone wants to do it. Every college kid is a Dubstep artist, all of a sudden. You can go online and learn how to make Dubstep tracks, step-by-step. It’s become pretty formulaic. But again, there are some artists who are really great at it.

I also think the Trap trend is kind of funny because I come from a hip-hop background, and all those hip-hop beats are just trap. Trap music is just gritty hip-hop. And some Trap music is just preppy college kids in Connecticut making beats in their dorm rooms [laughs].

Speaking of Trap, you’re going on tour with Paper Diamond later this fall. He’s been putting out a lot of dope Trap tracks lately. What kind of DJ sets are you going to play on that tour?

We met Alex when we opened for him in Atlanta and have a lot of mutual friends in Boulder. He’s awesome – such a cool dude and really down-to-earth. Our DJ sets are really different from our live sets. We play some pretty heavy shit. It’s all edits of originals, though. We make edits of our own songs or other people’s songs. There’s not one song we play that you could just find online. It’s always something fresh and original that we’ve made. We like to keep things interesting.

You guys are finishing off 2012 by playing Holy Ship! How excited are you for that?

I was jumping up and down when I got that email! Who doesn’t want to hang out on a boat with some of the best DJs around? We actually played Weezer’s cruise last year. It was a different vibe, though. It was all indie bands and we were the only electronic act. It was so fun and such a good time. It was like summer camp because you see the same people every day, but bands and DJs are walking around and hanging out, too. It’s going to be a great way to finish the year.