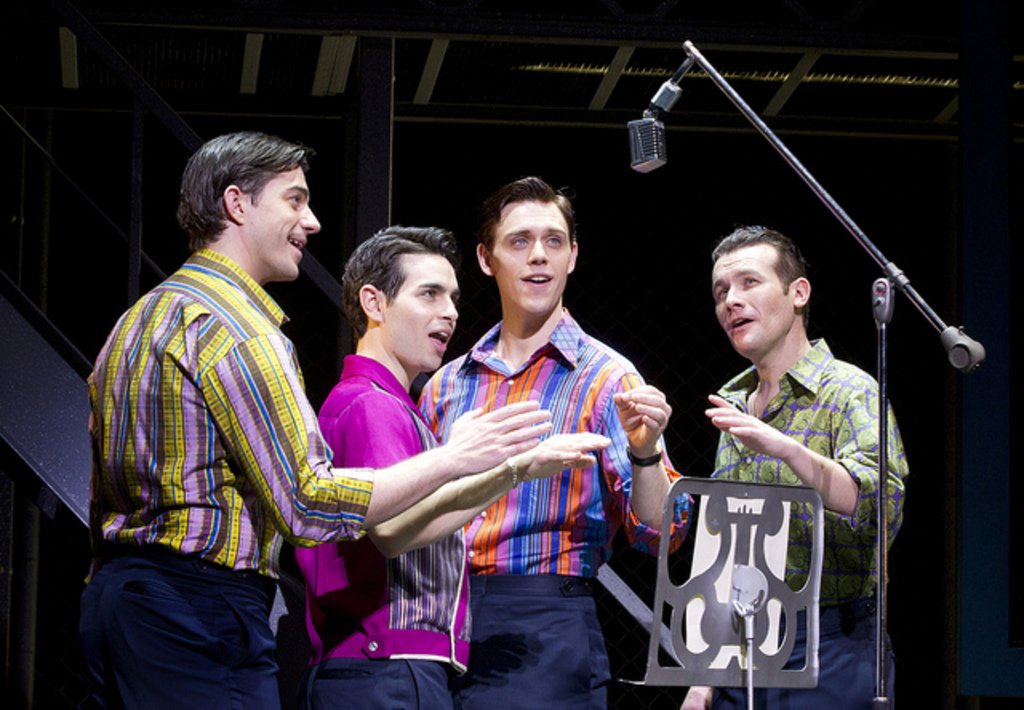 “Jersey Boys” is a timeless success…

Aside from being an ode’ the four guys from the Garden State, “Jersey Boys” is a rock-and-roll jolt of history, a smashing serenade of harmonies from the ’60s. 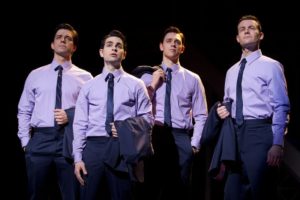 The chart-topping quartet was, of course, Jersey’s own Four Seasons, lead by the sensational range of lead vocalist Frankie Valli. Together the group created a string of pop hits (“Sherry,” “Walk Like a Man,” “Can’t Take My Eyes Off You”). If their go-down-smoothly achievements were overshadowed by the far more consequential Beatles and Rolling Stones, the creators of “Jersey Boys” — book writers Marshall Brickman and Rick Elice and director Des McAnuff — perform the excellent service here of asserting their place in a rarefied pecking order.

The Four Seasons weren’t a cultural phenomenon, no. They were just a great act. 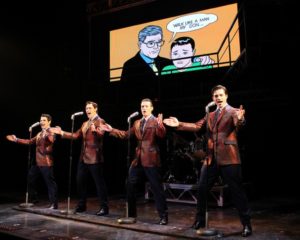 Brad Weinstock, one of the multiple Frankie Valli’s in the franchise, is outstanding. His vocal range and acting chops suck you in their world and keep you engaged long after you’ve left the theatre. Weinstock paired with Jason Kappus, who plays Bob Gaudio, you think at first that you’re suddenly watching “Sons of Jersey Boys,” but baby-faced Kappus is deceptive in the early scenes, because he knows how to show some steel and take command of the show. Kappus commands attention and immediately wins you over with his vocal prowess. Between the two, Weinstock and Kappus, it was amazing how many people were closing their eyes while the two sung. 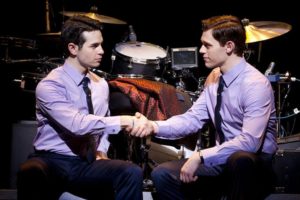 Other notable performances come from fellow band members, Colby Foytik as an especially irritating DeVito, which I intend as a compliment, and Brandon Andrus who’s laid back, mysterious and quiet Massi, really delivers when he finally speaks his peace.

Natalie Gallo, who plays the Valli’s first wife Mary Delgado, is fantastic. The tempestuous scenes between her and Weinstock pop. She sizzles on stage and has a star quality despite not being on stage often. Finally, Barry Anderson makes a splash, playing the role of Bob Crewe, his comedic timing and brilliant line reads caused serious laughter among the audience. 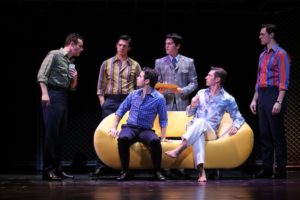 “Jersey Boys” has the potential to stand the test of time, partly because it makes enough money that no one is tempted to get greedy and cut costs, but mostly because its structure is rock-solid. Instead of giving you a story you might find boring after a few watches, this is a story plucked straight from history and full of songs that are easily considered classics.  As an audience member you may not know the song just based on the title but the moment those first few chords flow through the audience you know exactly what you’re in for.

“Jersey Boys” is a success, plain and simple. By the end of the night you may find yourself humming along and saying, “They wrote that one, too?” 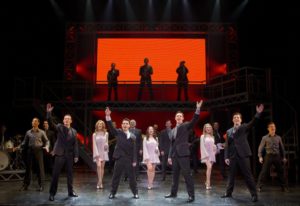