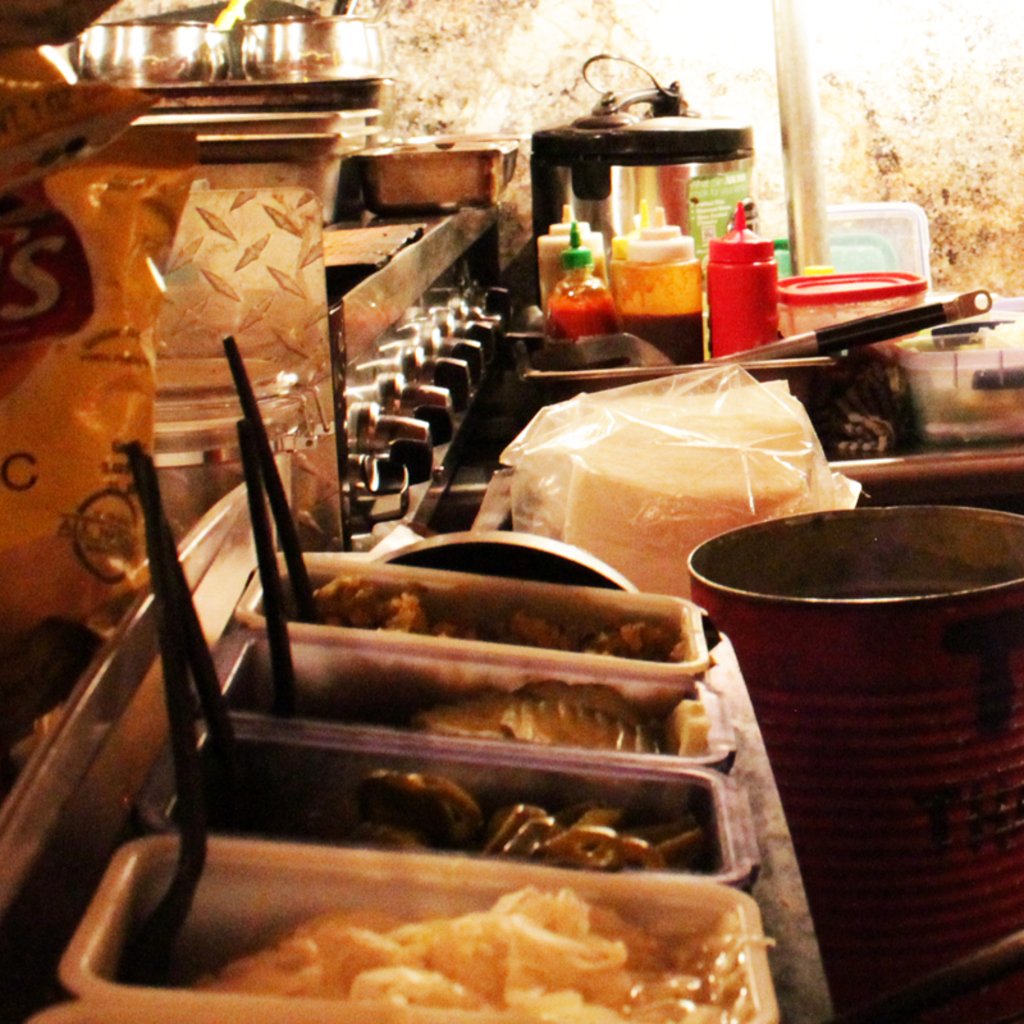 Eat the Heat: Dogg´s is Another Breed of Street Grub

There´s normally not a whole lot to the street food in LoDo. Slightly sketchy characters pushing mushy burritos from foam coolers or boiled hot dogs in Wonder Bread buns. Dogg´s, the metal shack nestled on the corner of 17th and Market, is technically another one of these, in the same way an aircraft carrier is technically just another boat. It glows in the square behind Market Street Station like a Paris cafe, a small fortress of umbrellas, coolers, lawn chairs and

Somewhere in the middle of it all, Cliff Stokes and Jennifer Chitwood are making a hot dog. A really big hot dog. ¨When they come out, people see it and say, ´Holy shit!´¨ explains Chitwood, grilling an Italian Sausage the size of a bananna.

Not that Dogg´s menu, stocked with burritos, gyros, brats and other typical curb feed, is particularly original. Rather, it takes classic traditions of the street and turns them into colossal monuments to the carbohydrate. The hot dogs, Nathan´s All Beef, come brimming with sauerkraut and green chili.  The burritos, heafty with chicken or beef, are packed with fried onions, rice, beans and chili in tortillas lined with queso and make Illegal Pete´s look like Taco Bell, and at half the cost.

¨People says, ´Oh my god, that´s an extensive menu,´¨ Chitwood says. ¨But everything makes into everything else, so it looks like a lot, but it´s really not a lot.¨

Dogg´s only truly unique offering is the Indian Taco, a medley of spicy pork, hummus, beans, vegetables and chili on flatbread. Stokes and Chitwood concocted it, per tradition, with whatever ingredients he happened to have on hand – a philosophy that goes for the entire menu. They wouldn´t mind if you asked for a slab of hummus on your burrito, or if you would like your hot dog California style with cucumber, tomatoe and cream cheese.

Chitwood watched it grow from a push cart that sold chicken on a stick, add new menu items and a bigger cart and grow into the impromptu cafe that stays alive until 3 a.m. on weekend nights. ¨Basically, it´s a real restaurant. It´s just outside. Someone once said it looks like took a room out of a house and put it on the street.¨

Stokes is the mastermind of the menu, but Chitwood grills every frank and rolls every burrito with unabashed glee and chats with every new face like an old pal. ¨It´s just my little corner of the world. I like making my little corner of the world fun,¨ she says. ¨Some people eat the food. Some people walk by and just say, ´Looks fabulous,´ and that´s great. I like people to stop, sit, have a good time and walk away smiling, even if they don´t eat.¨

Stop by Tuesday-Saturday from 10 a.m. to 5 p.m., or Thursday to Saturday all night.