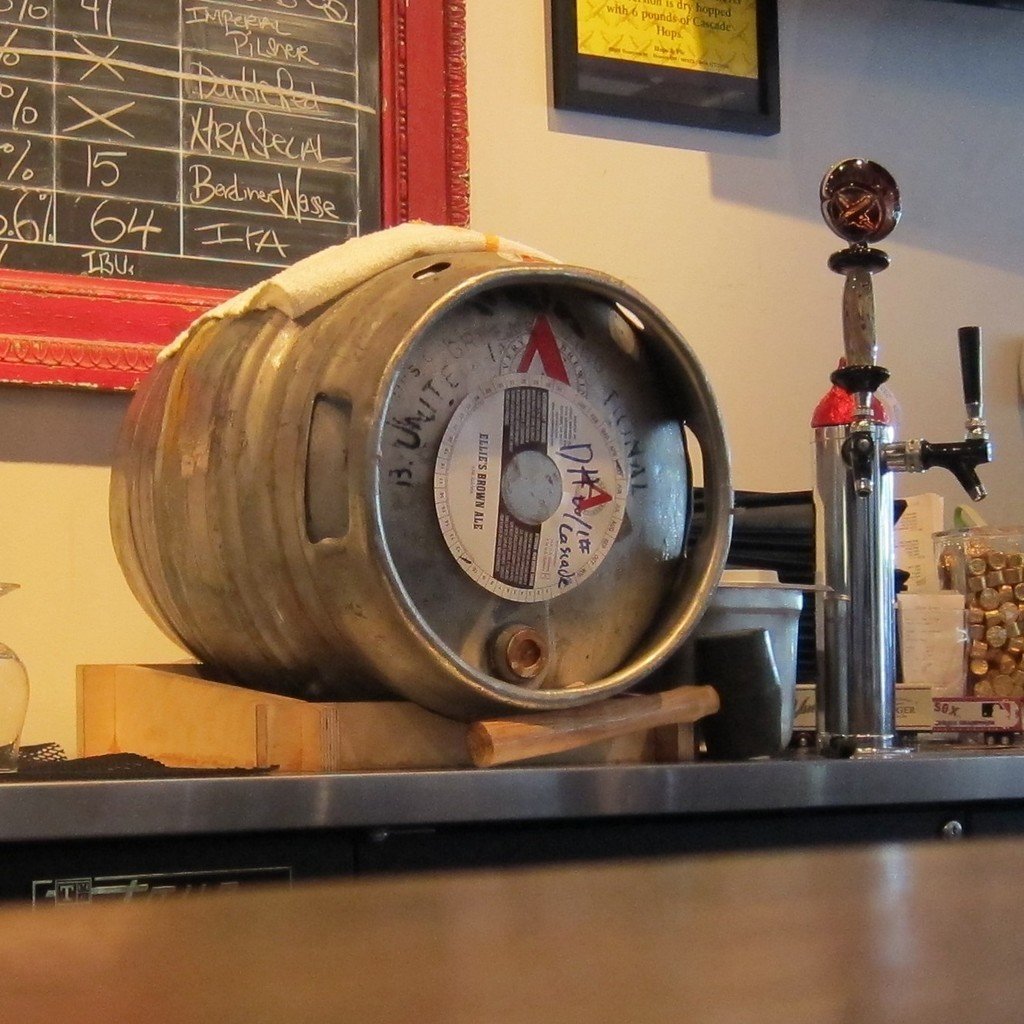 On a recent trip to Hops & Pie, one of our favorite places to drink beer, the normal din surrounding the bar fell silent. An announcement was being made. The folks from Avery Brewing had brought a special beer for the crowd to try, a heavily dry hopped, Ellie’s Brown Ale.

Their chosen vessel for this concoction was a firkin, which is pretty much a smaller sized keg that is typically used for cask style beers. One important difference, however, is that a firkin needs to be tapped using a rubber mallet to drive the tap into place, adding a bit of pomp to the occasion. Us bar slouchers were informed that there was a possibility that we would receive some free beer by way of tap spray if the procedure was performed improperly. Not to worry though, the man behind the bar tapped it like a true professional and everyone was safe. 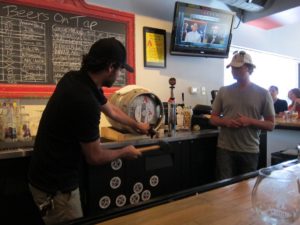 As the kind Avery rep explained, Ellie’s Brown is not normally dry hopped, but they decided to give it a try, thinking that the citrus notes from the hops with the chocolate flavors in the regular Ellie’s would result in something approximating orange chocolate. This was a relatively accurate description, but in beer form, this flavor combination tasted a whole lot better to me than those damned chocolate oranges that grandmas like to put in Christmas stockings.

The best part of the occasion was that it afforded us the opportunity to do some serious beer-geeking. In addition to sampling the firkin Ellie’s, we also ordered a regular Ellie’s to study the effects of dry hopping. The result: the extra hops in the firkin Ellie’s completely changed the character of the beer. Along with the obvious increase in hop aroma, the hops created a much lighter mouthfeel and seriously tamped down the sweetness of the regular Ellie’s. A heavier brown ale that I would normally pick on a cool November evening was transformed into something I would enjoy on a warm spring day.

But alas, just as a flower blooms only to wilt, the firkin eventually ran dry. Nonetheless, I left with a smile on my face, with knowledge that this same scene repeats at 6pm on the first Friday of every month with a new firkin and a new beer at Hops & Pie. Huzzah! New beer springs eternal!

On another note, if you like beer and haven’t been to Hops & Pie, located at 39th and Tennyson Street in Denver, you’re only hurting yourself friend. Besides the First Firkin Friday, the place sports one of the very best craft beer lists in Denver. They are true to the local breweries, but also carry an impressive array of brews from across the country. Because the beer list rotates, you could stay up-to-date on what’s new in craft brewing by just hanging around their bar all the time. I think there are some lucky folks that pretty much do this.