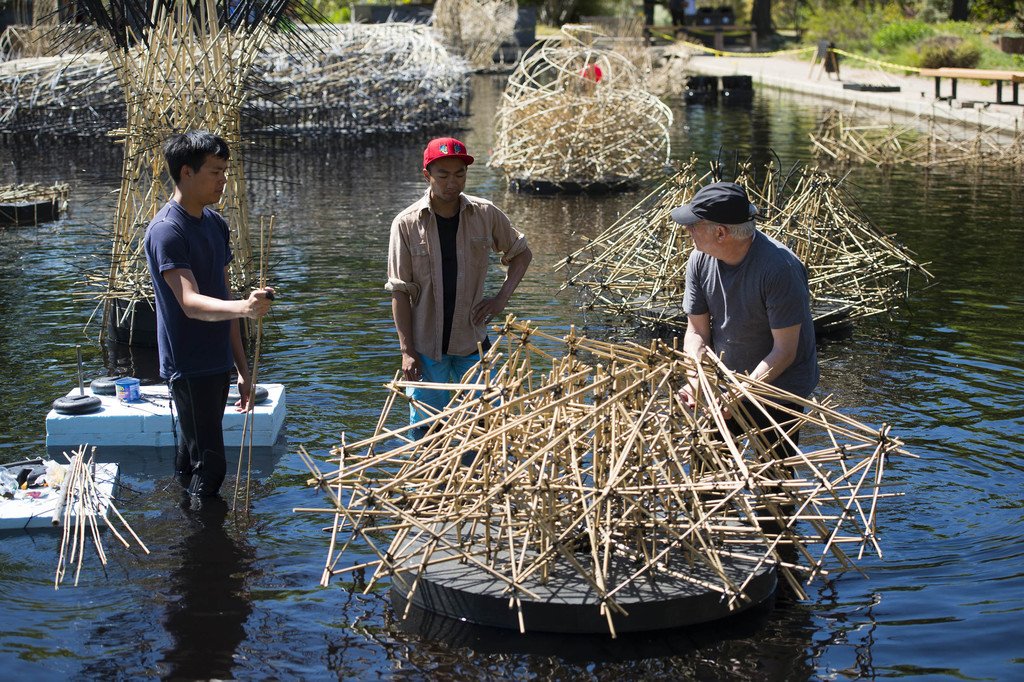 Internationally esteemed and recognized artists have created two separate bamboo works of art in a special exhibit called Kizuna, West Meets East at Denver Botanic Gardens (DBG). The separate installations are graceful, large and dream-like. The bamboo gives rise to oversized looking nests and massive leaves while individual waves of bamboo seem to lay down over on themselves creating a bigger swell. The artists, Tetsunori Kawana and Stephen Talasnik constructed the exclusive pieces on-site for the DBG with the help of volunteers.

Kawana is a contemporary Japanese artist and Ikebana master, which is the Japanese art of flower arranging. His works have been exhibited internationally at New York Botanical Gardens, the Moscow National Museum of Russian Fine Art as well as national galleries in Italy and Australia.

Drawing on Talasnik’s background as a draftsman and sculptor, his work has been described  as “a conversation between fine art and architecture”  (Denver Botanic Gardens, 2012).  His works have been featured in the New York Timesand exhibited internationally and are permanently installed in the Smithsonian Museum of American Art in Washington, D.C., New York, Germany, London and the Art Institute of Chicago.

DBG also recently unveiled two of their newest additions in sync with the opening of Kizuna.  The expanded Japanese Garden, which includes the new Bill Hosokawa Bonsai Pavilion and Tea Garden opened this month.

Visitors can catch a glimpse of Kizuna, West Meets East through November 4, 2012.  Hours run between 9 a.m. and 8 p.m., varying in the fall.