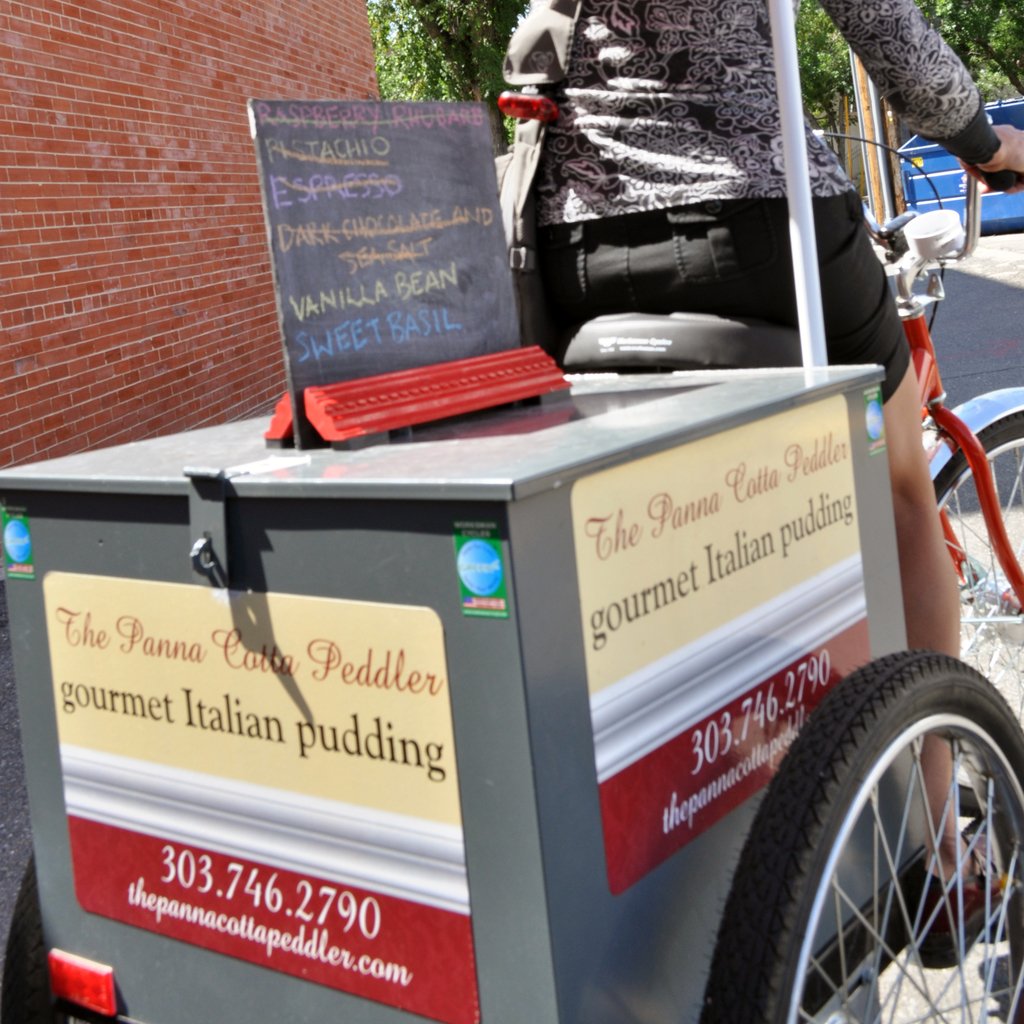 Eat the Heat: An Italian Delicacy Hits the Streets 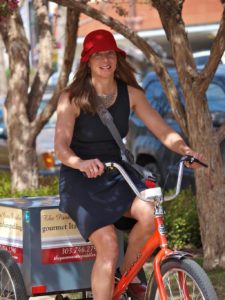 Lara Galante’s hand-made Italian pudding, or panna cotta, is fancy stuff. It’s the kind of thing you find at a country club garden party, not Food Truck Row near Sherman and Colfax, where last Thursday Galante brought her little red bike cart to peddle her hand-crafted delicacy next to sizzling bratwursts and coolers of Gatorade.

She wore an elegant summer dress and a droopy sun hat that matched her bike. “I’m trying to give a gourmet image,” Galante explains. “It’s a gourmet dessert.”

Panna cotta means “cooked cream,” but Galante thought “Italian pudding” sounded a bit more elegant. The dessert is closer to custard in consistency, but rich, creamy and cool enough for a June afternoon in City Park. Galante cooks it from scratch with local and organic ingredients in flavors like Raspberry Rhubarb, Chocolate Sea Salt, Sweet Basil, to name a few of her signature concoctions. She grew up making the stuff, but only took it to the streets three months ago…after losing a job with a company that makes dog poop bags.

“I love to cook and I love to cycle, and I’d been talking about doing something in the culinary arts for years,” she says.

She decided on the Italian morsel after serving it at a dinner party. “People who didn’t know what panna cotta was were like, ‘Who would have thought you could pull off pink peppercorn in a dessert?’ The people who were said, ‘Oh my gosh, this is the best panna cotta  I’ve ever had.’”

So she acquired a bike cart, rigged it up with an umbrella and chalk board menu and started taking it to Pearl Street, downtown and anywhere people might be outside, hot and just a little adventurous.

Galante says sometimes during a sweaty Saturday before a Rockies Game, some would rather stick with Cold Stone than try a mysterious, complicated-looking European dainty. But under the bon vivant veneer is a dessert no less agreeable than a Rocket Pop from an ice cream truck. “It’s mostly about people knowing what it is,” she explains. “I have people who know it see the cart and say, ‘Oh my gosh, it’s my favorite dessert!’”

Galante looks to cases of other traditional uppity desserts making successful jumps to the street – a smash-hit crème brulee cart in Philadelphia or a shop in Manhattan that sells nothing but various rice puddings. “Who would think you could have a store selling just rice pudding? But it’s just like an ice cream truck.”

Galante expects sales from her cart to drop as the summer wanes,but she talks about by then seeing it in coffee houses, organic restaurants and perhaps someday even in large chains like Whole Foods. But for now, with a rented kitchen and a single red bike, Galante is just aims to get the word out about Italian pudding.

To catch Galante’s bike, head to thepannacottapeddler.com for a weekly schedule and menu.