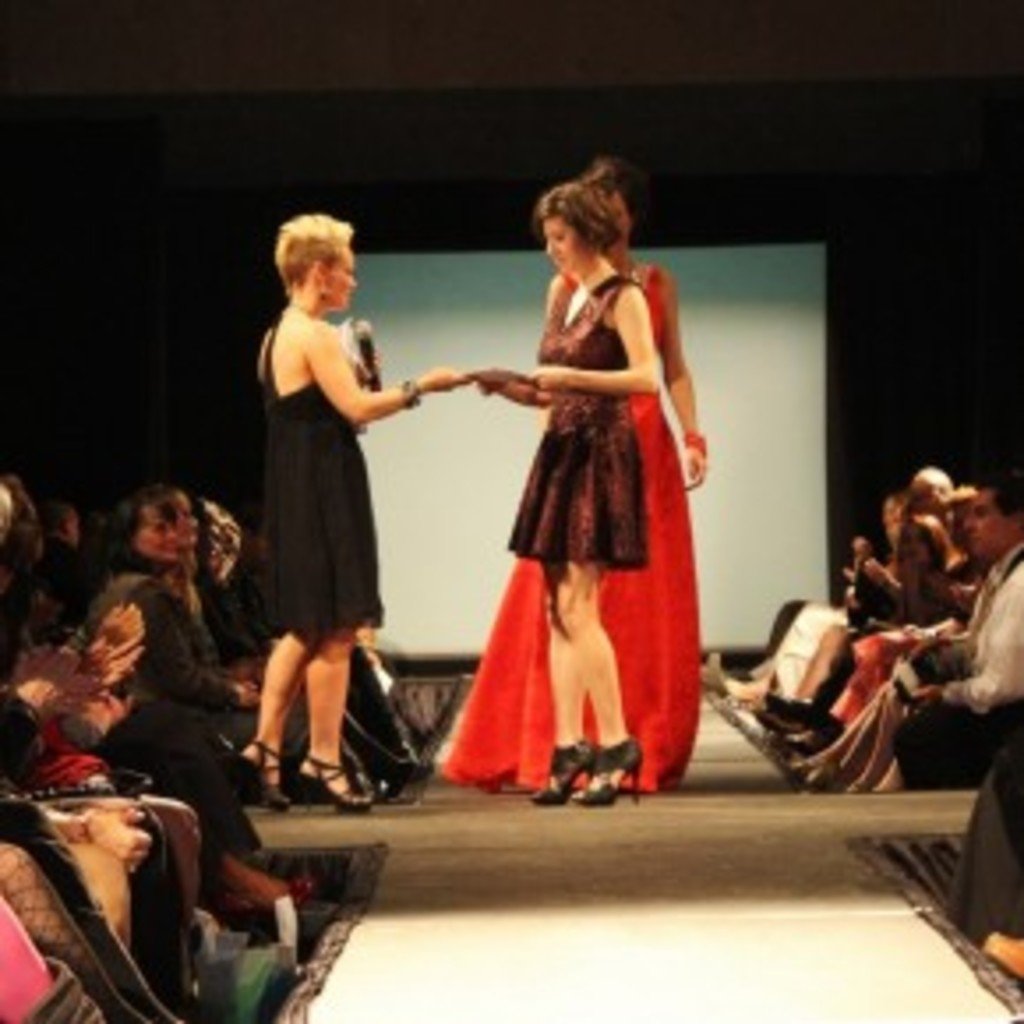 Frock Out 2012: Come Undone took place on April 19 at the Denver Central Library, featuring a Titanic theme inspired by the 100th anniversary of the sinking of the RMS Titanic on April 15, 1912. Co-produced by Fashion Denver’s Brandi Shigley and Denver Public Library’s Fresh City Life, the evening included a VIP pre-show cocktail party with a display of the designers’ garments, nibbles and a long line for the bar; a magician; and a string quartet reminiscent of the famed musicians who played until the very end of the Titanic’s ill-fated voyage. The main hall of the library transformed into a watery scene with the help of lighting effects, and 12 designers strutted their lines down the runway.

Each designer showed five looks – one each for spring, summer, fall, winter and the designer’s vision (a piece inspired by the opulence and hubris associated with the Titanic). Judges included a panel of fashion experts such as Project Runway designers Fallene Wells and Mondo Guerra. And, 9News Style Journalist, Heidi McGuire, emceed the show. Amongst the fierce competition of this show, Stephanie Ohnmacht, designer and owner of stephanie O., was named as the first place/grand prize winner and as the people’s choice winner.

“I have participated in all of the Frock Out shows and I am consistently impressed with the exceptional talent on display,” Ohnmacht says. “At each show, I have met amazing designers, made great friends and further expanded the network of designer support in the community. Frock Out is a great way for the designer community to come together and raise money for one of the best public resources in town.”

Ohnmacht has been designing and creating clothing since she was seven years old. She finds inspiration in  beautiful fabrics, and she has fun building the designs. “The icing on the cake is when I receive a compliment or when I see someone wearing one of my designs,” she says.

In order to incorporate the evening’s “Come Undone” theme, Ohnmacht played with structured folds and draping in the fabric to reflect a very relaxed and unique aesthetic, as well as asymmetry and color pops. “Orange used the right way adds such a great flash of confidence and creativity in the wearer,” she says. “Hints of orange suggest a flirty, fun and sexy side to what might otherwise be a conservative look. I love having a flash of orange without going too overboard (no pun intended). As for the five pieces in the show, I wanted each to be slightly different yet still part of a cohesive look.” She also accessorized each look with Titanic-inspired life preserver earrings. Here’s what she had to say about each look:

Spring – The spring dress was a bit unconventional in that I used a heavier material than one might naturally choose for the season (home decorator material). The fabric is woven to inverse design on the back of the fabric. Draping the skirt was lots of fun, and I was happy with the resulting three-dimensional cascading folds.

Summer – For the summer dress, I worked with a shimmery pearl-gray Bengaline Faille fabric accented with orange piping for a bit of subtle sex appeal.

Fall – My fall look was inspired by the fabric itself – a gray and white jacquard. I wanted a diverse collection of silhouettes in the collection, so here I branched out into comfortable but fitted pants with a flowing pink silk-chiffon blouse.

Winter – For winter, I wanted to do something unexpected so I did a retake on a vintage cape made of soft gray wool but with an orange chiffon lining that would peek through with the motion of the wearer. All seams on the cape have been top-stitched in orange and complemented with orange buttons.

Designer’s Vision – And for my last piece, the designer’s vision dress, I wanted an elegant and eye-catching gown. I was able to use the great structure of a three-dimensional, lightweight orange brocade to create an asymmetrical drape that suggested motion even while at rest.

“While the prizes are amazingly generous, I am truly flattered by the wide-spread appreciation for my designs,” Ohnmacht says. “It is so encouraging to know that my work has such appeal with the discriminating tastes of the public at large as well as the professional judges.”

Stephanie Ohnmacht also recently launched her own ready-to-ear line at stephanieodesigns.com, and she’s hoping to be one of many local designers working together to help build the pooled resources necessary to deliver locally created, high-quality clothing from design to pattern to construction. The second place winner was Denise Chaudhari, and the third place winner was Katie Wells. The other designers consisted of Gabriella Martinez, Vicky Krabill, Pearl Hanbei Long, Cleo Ortiz, Julianne Hazelhurst, Jacquelyn Bartels, Rachel Hurst, Crystal Sharp and James Silvrants. Thanks to all of the designers for a fantastic show.

For more information on the event, visit the Frock Out Web site. To see some of the designers’ looks, visit the Denver Public Library online gallery. And, for more photos from the show, visit 303 Magazine’s photo gallery.