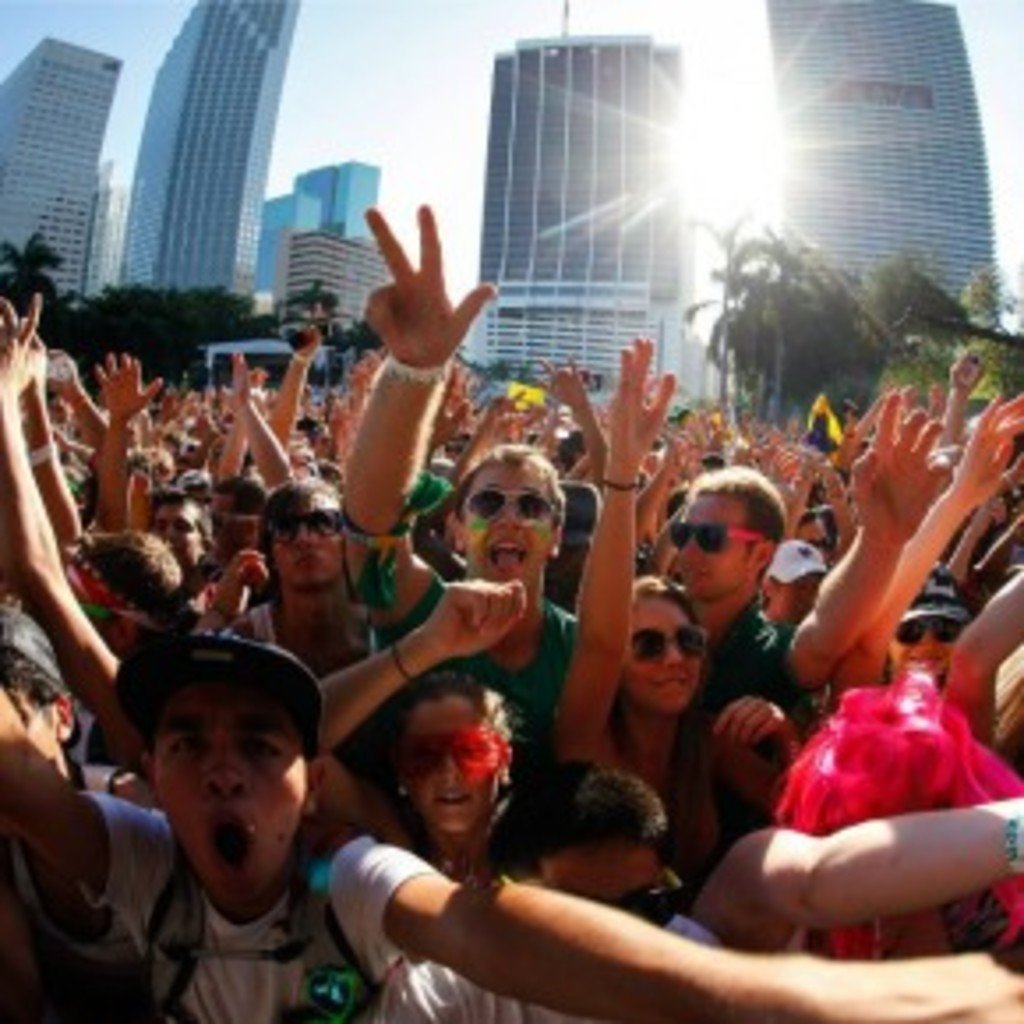 Miami. According to the locals (those I’ve spoken to), Winter Music Conference is the best week to be there. I’ve never been in Miami another time. So I wouldn’t technically know whether it ever snows there, but, to my knowledge, Winter Music Conference is a misnomer. Maybe that’s why Ultra, the 100,000 capacity music festival that happens that March weekend, is trying to re-brand the week Miami Music Week. Conference vets may be reluctant to change, but it’s not the worst idea in the world. And if any entity’s got the promotional muscle to pull it off, Ultra does.

I first performed at Ultra in 2007. My buddy Satori-C won a DJ slot at the New Times stage via Westword mix-off and I joined him and then production-partner PJ Stroller. Stroller’s girl wanted to watch, so she agreed to dance and stilt in exchange for passes. I did double duty. Two years ago, I performed with Team EZ for Rabbit in the Moon’s Ultra set, after barely missing my window the year prior due to a premature festival shut-down. NYC dancer (and former Coloradan) Katie Kansas talked Ultra into a budget for fellow Denver performer Nate the Average and I this go round. We built giant robot costumes with it.

We landed in Miami Wednesday afternoon. Picture us in snowboard boots, bike helmets, a sportscoat (another misnomer), and football pads carrying crutches, bouncy stilts and robot parts. That’s how we roll. “Can U Feel It: The UMF Experience”, a documentary about Ultra, was premiering that night at Bayfront Park’s Kilpsch Amphitheatre. Deadmau5, David Guetta, Will.i.am, Carl Cox, Avicii, Afrojack and many more are featured in it. Kansas’ gaggle of go-gos were done up as hottie hostesses. On the plus side, “Can U Feel It” was more concise than last year’s two and half hour Electric Daisy Carnival doc. It was still basically an hour long commercial for the event. Why watch a movie about moving to music when you could be moving yourself? As a dance music culture vet, though, it is exciting to see its massives immortalized. Maybe I’ll watch with my grandkids someday. They’ll probably wonder what teenagers are doing with pacifiers. Veteran dance vocalist Jes was the highlight of the Mia-hosted after-party (though I crashed before Afrobeta).

Thursday was primarily a work day. I was originally hoping to see Coral Castle, the world’s only megalithic sculpture garden built in modern times (according to History Channel’s enthralling Ancient Aliens) but my ride decided to take a last minute gig. All Aboard, a yacht party with Carl Cox, Digweed and others was another option. We ended up at the hardware store, running into Miami-based performance artist Wildchild and his self-described “faggots.” Beatport’s Dirtybird BBQ, conveniently located right across the street at Villa 221, provided the perfect work break (not to mention free meal) before an Ultra walk-through that eve.

Day one of Ultra was on Friday. Our hotel was quickly being invaded by ravers in fuzzy boots and neon bikinis. Yes, there were probably dudes rocking both—especially in the wake of LMFAO’s “Sexy & I Know It.” Nate’s sister, in town to work Keep A Breast’s fest booth, lent a hand with robot finishing touches. Transporting giant costume parts, among other things, to the far side of the festival grounds was a chore. Golf carts sat parked every few yards of the route. Others whizzed by perpetually. The green rooms were packed with dancers, makeup artists, dressing assistants, aerialists, stilters and more by the time I arrived with the first load (Kraftwerk had rightfully claimed one of three). Fortunately, everyone was accommodating and I started caking on emerald makeup and glitter in preparation for Mantis Man’s maiden Ultra voyage. Miike Snow, playing the live stage below, provided the soundtrack.

I bounded out on bouncy stilts just in time to catch New Order. P-tots bounded after me to get their picture with the oversized insect. Some high-fived the furry undersides of my forearms. Sweat beginning to sting my eyes, I passed off the stilts to Nate (we were sharing a pair) so he could take his four-legged creature out for a spin. “Apocalypse Pup,” for lack of a better name, wears a saddle that kids and even small adults can ride for short periods. When he returned, we attempted a test run in the robot suits. Mine quickly fell apart and Nate face-planted within twenty yards. Fail. On the golf cart ride back to our hotel, our festival point person, Je, hinted about the super secret surprise special guest planned for the following day.

Saturday. Day two. If at first you don’t succeed, go for the slam dunk. Nate was already hard at work on costume repairs. Our intern Sydney and I scored brunch in the form of Cuban sandwiches—a meal I rarely miss in Miami—from the nearby Bayfront Marketplace. Wrangling a golf cart of our own (for ferrying robot parts across festival acreage) was the next priority. Nate soon secured one, albeit the jankiest one in the entire fleet. Beggars can’t be picky bastards. He dubbed it the “golf cart of death.” Sydney had checked out a nice camera from CU, but wasn’t near proficient with it yet, so I took over photography responsibilities when Nate went out on all fours. A dancer with some horseback experience saddled up for cameos with Zeds Dead and Seth Troxler. She would be the first of several to straddle Nate that night. Abandoning their giant platform shoes was essential for the Ultra Bots’ public debut with Carl Cox and the legendary Sven Vath. Super secret special guest Madonna played hype woman for Avicii’s main stage set nearby. Afterward, I ended up at Mekka, where the headliners were–surprise, surprise–all fellow Coloradans: Pretty Lights, Paper Diamond and Michal Menert.

Day three. The homestretch. We’d heard word that the Ultra Bots were a hit with the organizers. Sigh of relief time. Sunday Funday. Bassnectar was on the horizon—but not on the horse. We tried to talk him into posing on Nate’s saddle for a picture, but the monster bass master was a big old wussy cat. Steve Aoki, on the other hand, practically leapt at the chance, cementing his daredevil reputation. Afrobeta singer Cuci Amador hopped on as well—while singing a song in the middle of her band’s show. Kansas rode inside a giant “T” of main stage barricades, high-fiving ravers along the way, as Fedde Le Grand dropped a set that would include one of the weekend’s many epic Goyte mixes. Ultra was happy—mission accomplished. Cox rocked disco at the Mokai-hosted closing party. We shimmied into VIP and kicked it with the festival organizers before sticking our toes in the ocean, grabbing breakfast and calling it a night.

If you could drive a Delorean back to your favorite Miami moment, where would you go?