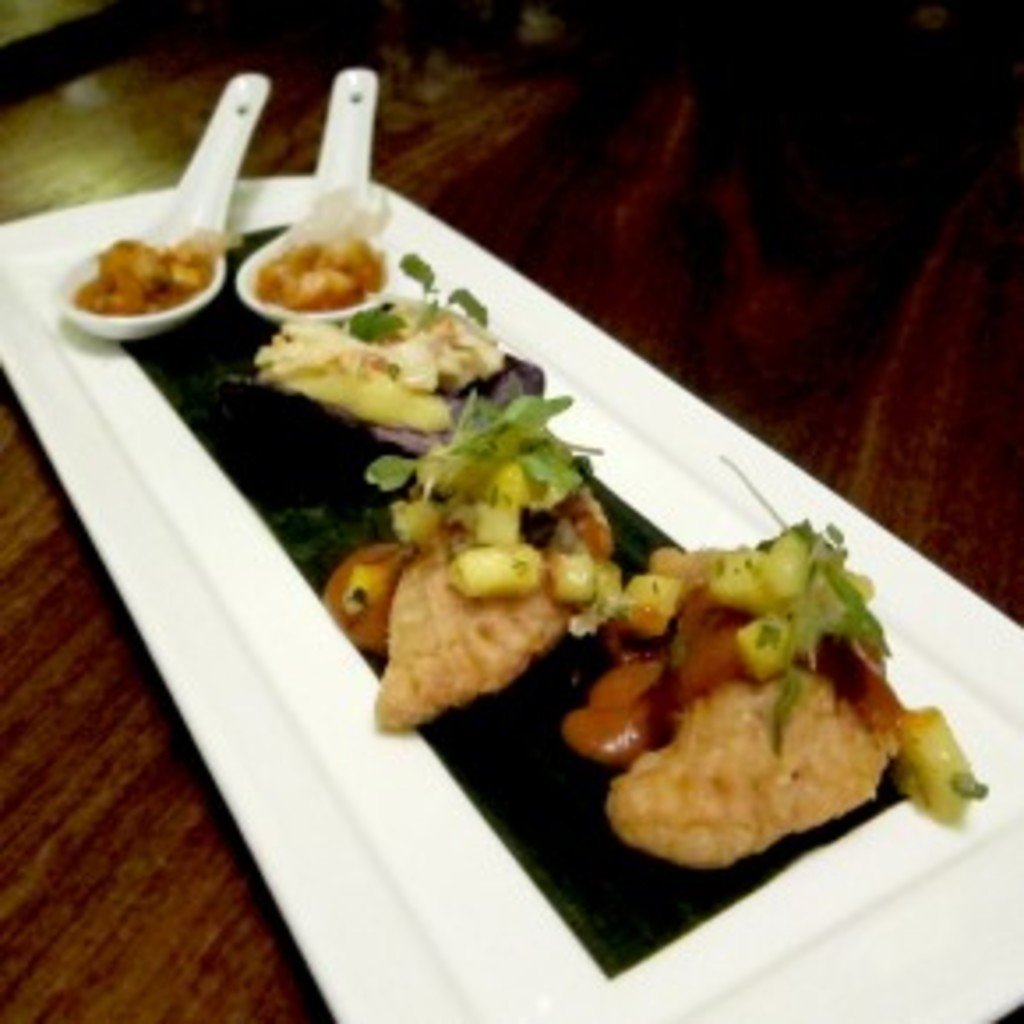 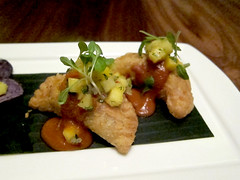 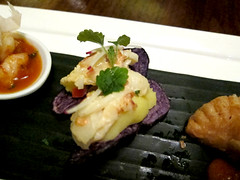 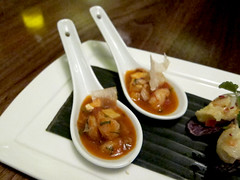 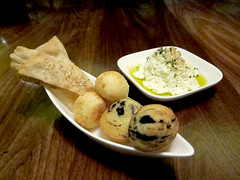 Chef Richard Sandoval, owner of multiple highly acclaimed restaurants across the nation—including Zengo, La Sandia and Tamayo here in Denver—is at it again. With the opening of Cima in the Westin Riverfront Resort and Spa at Beaver Creek Mountain, Sandoval is bringing reinterpreted Latin cuisine to the ski-loving population of Vail Valley, and cima—Spanish for peak, or summit—couldn’t be a more appropriate name.

I had the opportunity to dine at Cima when 303 Magazine was invited to preview the menu, and I and my friend gladly drove the snowy miles into the mountains to see what the restaurant had to offer. Our meal began with a beguiling selection of small tastes from the appetizer section: lobster causa, a combination of Maine lobster, red bell pepper and yuzu-siracha aioli atop a blue potato chip; seafood ceviche, with shrimp, octopus and calamari in a sweet orange juice and aji panca marinade; and light, flaky empanadas filled with chicken, chile poblano and Oaxaca cheese and topped with kaffir lime tomato sauce and mango salsa. A bread basket consisting of huitlacoche corn muffins, pao de quijo and sesame-cumin crackers also appeared, served with a light, milky, goat ricotta foam drizzled in olive oil. Each item we sampled showcased unexpected flavor combinations with a Latin edge, neatly setting the stage for the rest of dinner. 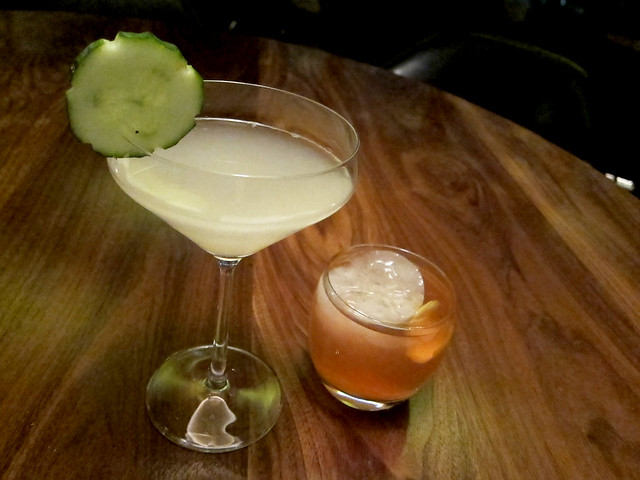 With my meal, I couldn’t resist ordering the sweet and well balanced Purkisset, a cocktail made with Gordon’s Gin, rosemary, lychee, lemongrass and lime. My friend sipped on a Tequila Sazarac, made with tequila, simple syrup, peychauds and absinthe and with a large, slow-melting chunk of ice floating in the middle of it to keep the cocktail chilled and strong. 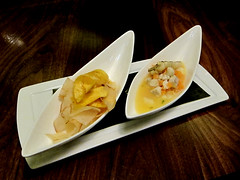 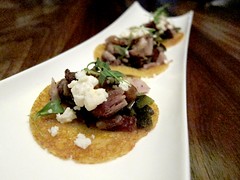 Between the ceviche we’d sampled earlier and the appetizer of ceviche nikee we ordered, I couldn’t decide which version I liked better. The former had been sweet and smoky, while the latter featured fluke in a tart, citrus-based marinade called leche de tigre (“tiger’s milk”), and was mixed with red onion and sweet potato and garnished with a spear of charred Peruvian corn kernels. They were two different animals, both worth trying. Still, once our other appetizer came out, I was so enamored I nearly forgot about them both—we’d ordered corn cachapas, thin, sweet corn crepes topped with tender duck confit, bits of pickled poblano chili, crumbles of queso freco and tomato jam. They might have been a little difficult to pick up and eat, but the combination of textures and fatty, creamy, sweet and salty flavors in each bite was excellent. 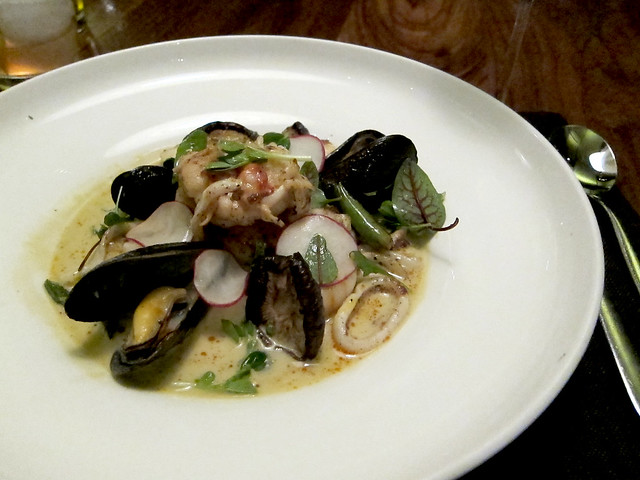 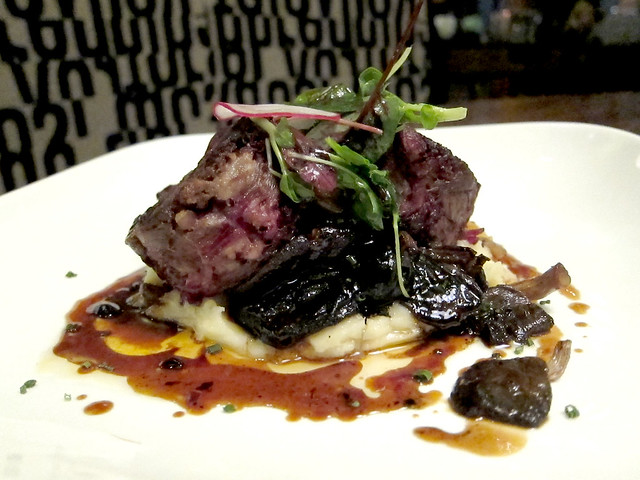 I also tried a few bites of the Wagyu beef short rib paired with huitlacoche, meaty shiitake mushrooms, and a Oaxaca cheese potato puree, and was glad I did. The rich, savory meat had been subjected to 48 hours at 150 degrees before it was chopped, formed, and then seared on the grill, and every bit of care in the process showed. 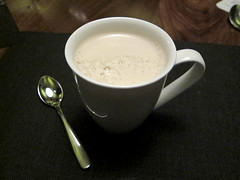 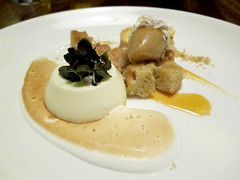 After that parade of indulgent courses, it seemed wrong to have a dessert—and yet it also felt wrong not to. My friend and I compromised by choosing what really felt like three different desserts in one: a silky puck of lemongrass panna cotta atop toasted marshmallow cream, sharing a plate with coconut cake chunks, passion fruit syrup, and grilled pineapple sorbet, plus a creamy half-moon of a yuzu pinenut tart. A mug of sweet, honey-vanilla chai for me and a cup of black coffee for my friend more than completed the meal.

With Cima, it’s clear that Chef Sandoval has brought his signature twists on Latin cuisine to Vail Valley, along with an emphasis on fresh market produce, sustainable seafood, locally raised meats and specialty products from local purveyors. And if you want more? Try authentic Mexican cuisine at Chef Sandoval’s other new restaurant, Venga Venga Cantina & Tequila Bar, in nearby Snowmass Village.