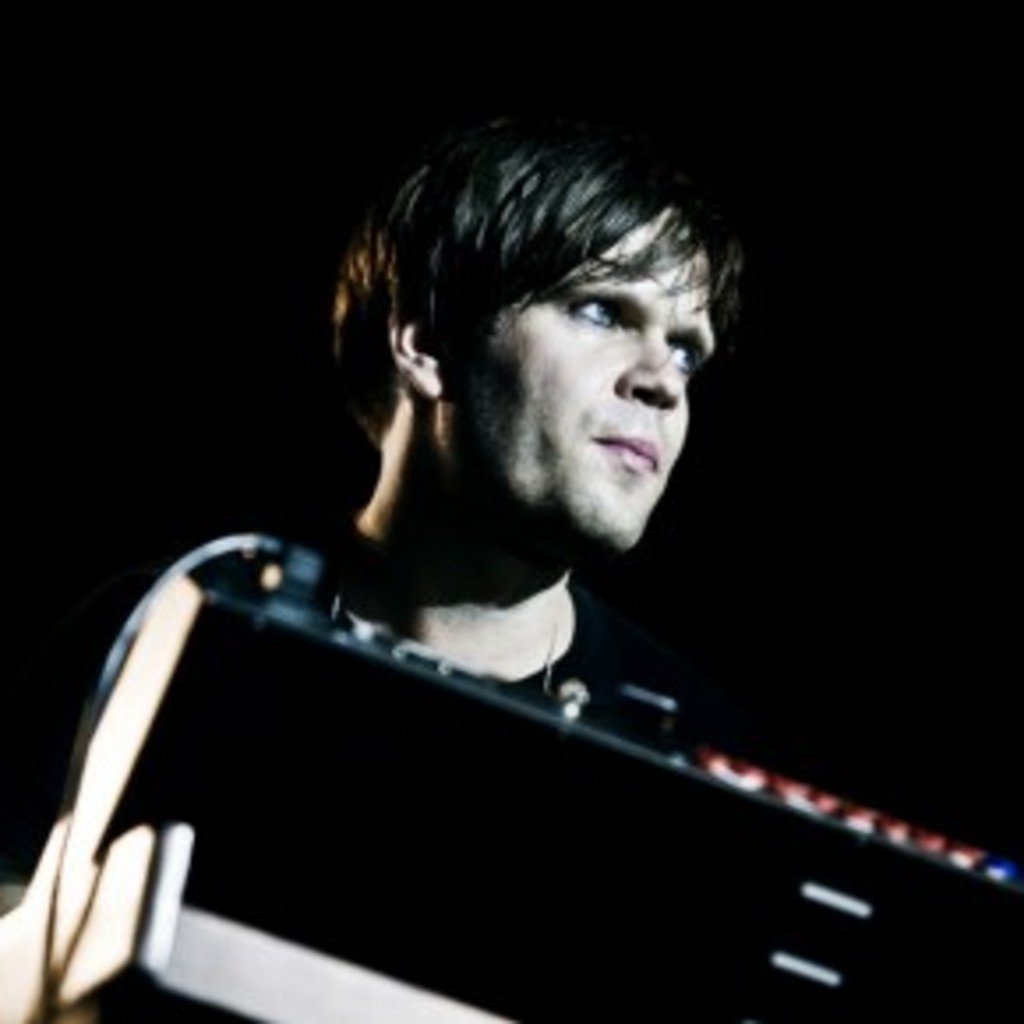 Danish electronica composer Trentemoller’s band smoldered at The Ogden last night. Below is the transcription of a telephone chat we had a few years back, on the occasion of his Denver debut at Cervantes.

I think I was four or five years old. On the radio, there was a classical track. Of course I can’t remember what the composer was, but I was really drawn into that and I can remember that I was having goose bumps. That was the first time when I really thought that music could touch you in a deep way. I think I was four, five or six years old.

I was actually starting not playing any instruments, but I was stealing my mom’s pots and pans and just smashing those pieces while playing to music from the radio. Later, my parents gave me a drum set and I terrorized the whole family with it. Then I tried to play piano.

No, I just been playing music on my own. Actually, I started playing in some bands when I was about twelve years old. I played in some more like indie rock bands. But no, I never got to music school or had any teachers teach me about it. In a way, I think maybe it was a good thing for me. I wasn’t very aware of what to do and what not to do. I just played music and got this passion for music at a very early age.

I was on vacation in London and I went together with some of my friends to this very dirty basement called the club and they were playing some very fast beats. It was jungle and drum and bass. It was the first time I had heard that kind of music and I was really into that energy because it reminded me of the same energy you can find in punk but with a different sound, of course, because it was a DJ playing and it was electronic and it was also, at the same, that the trip hop came up. I was also big into the first Massive Attack album and also the first Portishead and they had what the jungle and drum and bass didn’t have—good melodies. So that combined was really eye opening to me. When I came back to Copenhagen, I bought a sampler and tried to incorporate that into rock bands but the other guys in the band just nodded their heads and thought I was totally lost because I suddenly wanted to make electronic music.

What role did you fill in the rock band before you had the sampler?

I was playing a little bit drums and then some keyboard. I also played a little bit guitar but I was mainly just playing keyboard in those rock bands.

Did they have a name?

Oh, it makes no difference. It was very bad and I’m trying to pretend it never happened.

More than one critic has commented on your cinematic qualities, what are a few of your all-time favorite films and/or film scores?

I’ve actually just finished making music for a Danish movie and I’m really into, maybe in the future, trying to do more film scores and, you know, working once more with making music for movies because it’s also about expressing certain atmospheres and moods and my album The Last Resort was also about that. It was actually nearly like a soundtrack to an unwritten movie. So, for me, it’s quite interesting to work with other people because, when you’re making music for a movie, it is not the same kind of as making your own album. You can be own boss and decide totally what to do. Making a movie, you have to talk to the producer and the director and you also have to kill your bearings.

What are some of your favorite films and/or soundtracks that you didn’t compose?

One of my favorites is Angelo Badalamenti, composer for David Lynch. David Lynch’s movies, they have so many layers, in their stories and in the visual side but also in the music. They’re very good at writing something that is very beautiful but underneath there is some kind of paranoia or some more disturbing, creepy kind of atmosphere and this contrast, I’m really into that.

You’ve worked with some pretty unique vocalists over the years (sometimes merely via remix kit), any in particular you’re dying to work with in the future?

There’s one big wish, actually, and that is to work with a girl called Hope Sandoval. She was the lead singer in Mazzy Star and I’m a very big fan of that band, so I’ve been chasing her and her record label for the last two years but without any luck. So maybe I’m lucky in the future. There’s a rumor that she will be singing on one of the tracks of Massive Attack’s coming album, but she’s very shy and maybe not that much into electronic music. I don’t know but I want to keep on trying. In the near future, I will also be working with Karin Dreijer from The Knife. We will do a track together. I’m really into very personal voice. If you hear just five seconds of a Knife track, you know if it’s her singing because she has this special pitch.

Whose idea was it to base the “Moan” video on the Russian astro-dog Laika?

It was actually not me but it was a big director called Neils Gråbøl who came up with this sequence. We were talking about that it’d be great to make a video that was not totally telling the story. It was a fun way to turn it around and twist it a bit. And this dog, thinking about being sent out to outer space. Neils actually went to Moscow and did this video with a crew of 23 people for one week. Then he went back to Denmark and showed me the video and I was of course very happy that it went so well. And so far, there has been more than watching it on the internet. There’s been a huge success for it, I’m of course very happy with that.

Much electronic music is nearly impossible to actually perform entirely live, what is your exact role with the live band?

For me, it’s actually quite natural because I’ve also been playing in some rock bands before and also playing electronic music so I’m more into the keyboards and samplers then we have a live drummer and guitar player, bass player. These guys that I have on stage, they also played on the album Last Resort so it’s just a natural next step for me to actually turn up and bring the music on the road. For me, there’s not big gap between electronic music and acoustic music. It’s just about mixing it in the right way and also having this contact to the audience that you’re playing for. Many electronic artists seem to maybe hide themselves too much behind their laptops and sometimes it feels like they’re using eBay while they are playing live. We are very much playing as a live band with drum solos and stuff going on. The basic idea of the music is electronic.

George Peele is an alien musician. He is also Music Features Editor for 303’s print edition.