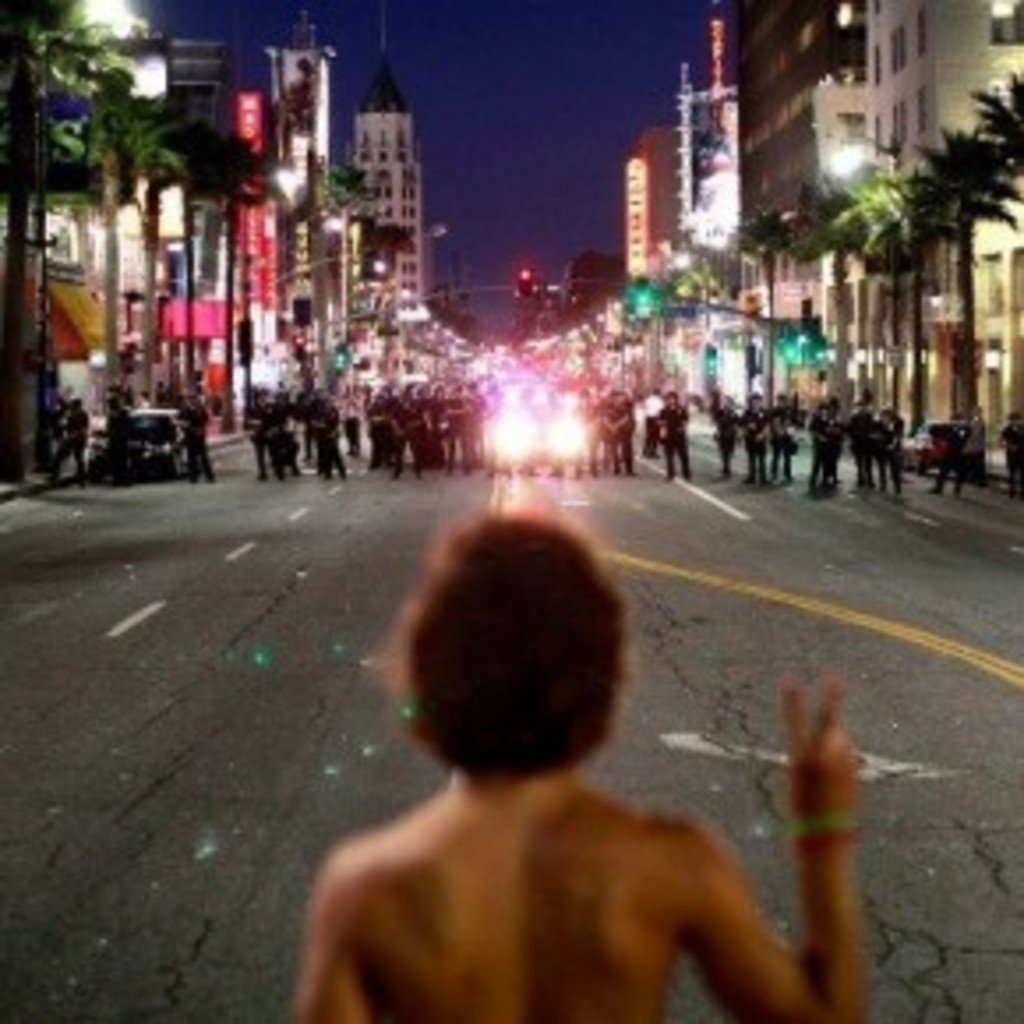 How often is a straight-edge Mormon blamed for inciting a riot? Last week’s Hollywood Boulevard block party outside the premiere of a documentary about Electric Daisy Carnival, a massive dance music fest put on by California promoter Insomniac, may well have been the first in history. Though he likely had accomplices (sound man? truck driver?), house DJ Kaskade’s tweeted invite packed the streets with a thousand or so electronica fans during one of the busiest rush hours in Southern California. Drumming up publicity for a film he’s featured in was probably the initial goal. Whether or not he had a permit seems to be a matter of debate. Whether or not he actually played a single track seems to be in question as well. Either way, attendees were determined to get their dance fix at any cost, planking and shuffling in the middle of the road when riot cops were finally called in. Rubber bullets were eventually effective in dispersing the crowd, but not before police cars were smashed and unruly ones arrested.

The rest of the country got to see the film—titled The EDC Experience—last night, though many theaters canceled the one-night-only screenings due to the Hollywood incident making national news. As if Kaskade was capable of conjuring violent candy raver mobs in every city simultaneously. I suppose Denver could have had its own riot instigators—maybe Manufactured Superstars or Pretty Lights. Alas, Denver screenings were all yanked so we ended up on the north side of Colorado Springs (Loveland was the only other option). Why were we willing to drive so far for a film about an event in LA? Well, Insomniac actually flew a camera man to Colorado to interview Beta Creative Director Ms. Easy, as she’s been performing at EDC with her Team EZ (including yours truly) for four years running now.

The videographer apparently spent almost six hours picking Easy’s brain about her motivation, influences and more. What made the final cut? Viewers witnessed Easy rummage through various costumes and props, ending up with a trumpet in her hands that she admittedly couldn’t play. Good thing her clown marching band isn’t really expected to master its instruments. Other non-DJ artists that pop up in the flick include Aussie-born comedian Nigel Ficke, LA Clippers’ cheerleaders, the seemingly ageless, Bowie-esque Perish and his hottie clown harem, a gold spandex-clad Suze Q and the Random Acts of Irreverent Dance (RAID) troupe, the ever-flamboyant Wildchild (as the wicked witch), LA’s Stilt Circus and Denver’s own Nate the Average humping a carousel horse.

It’s not every day you get to see yourself on the big screen–puppeteering a giant, hookah-smoking caterpillar no less.