Are we honestly ever capable of co-existing happily with another person? Just as they say that no two snowflakes are alike, no two people are again the same. We are all linear beings—living a time line and bloodline that, though unfortunate at times, we alas cannot control in the slightest. At numerous, specific points in our lives, our time lines intersect with those of others. Sometimes it’s something as simple and minuscule as a smile from a grocery store clerk that brightens our day and changes how we drive home, possibly avoiding an instance of road rage that would seriously alter or end someone else’s time line permanently. Other instances, though, are capable of catapulting our lives into an uncontrollable series of events that will change us forever. This week’s column is all about long-distance relationships. Whether you and your beloved are an annoying 45 minutes apart or across the world, it can be a miserable, painful, arduous task to cope with. Loving someone and making it work is a hard enough thing to orchestrate and be successful at without the added strains of being physically apart all the time.

I incessantly wonder how some couples are able to make it work. It amazes me that thousands of men

and women in the military and other worldwide professions spend months and even years at a time apart from their significant others. And they make it work. Not all though. As there are two sides to every story, there are two sides to this as well. Does being apart for extended periods of time wear on a relationship? I can’t tell you how many stories and first-hand accounts I hear that military wives cheat on their deployed husbands because of the lack of closeness and companionship and physical comforting that a mate provides us. And who is at fault here? A husband or a wife in the armed forces has made a choice and a sacrifice for the good of the country. But with that, they’ve placed their lives, relationships and ambitions all second behind duty. Is either person or choice truly right or wrong? Absolutely not. We are all linear beings—living a timeline and a bloodline that, though unfortunate at times, we alas cannot control in the slightest.

Who’s to blame? Is one at fault for not being faithful while the other has made the conscious choice to be deployed for months and months at a time? I think so. Is the other at fault for leaving and knowing that distance was going to be a difficult chore between his or her lover? I also think so.

That’s because we are too selfish as individual humans on our respective and linear timelines. And is it wrong to be? At the end of the day, who can I trust to look out for me other than myself? I can’t trust anyone. Being in love is about what you would sacrifice for the person you love. That means enduring. It means giving up what you think you need at the very moment and aligning your timeline to provide whatever your partner may need. Anything less is either not love or a coward’s weakness. I think that many people falsely love, and they confuse love for compassion. For instance, you would (or already do) genuinely love your children no matter what, correct? Although modern children are becoming more inclined to misbehave and be selfish, their biological and emotional growth is innocent and honest. If you were to leave on a military tour of duty or take a three-month job contract overseas, your child would never resent you and look for another daddy. And when you eventually returned, they wouldn’t despise the fact that you weren’t together for the extended period of time. They erupt into tears of joy and embrace someone that they genuinely love. Herein lies the difference between us and honesty.

My belief is that too many people confuse love with compassion. Do you love ice cream? Would you die for it or cry tears of joy after not having it for three months and taking your first bite? I didn’t think so. The reason “I love you” is such a dangerous phrase to share with another human being is because you have intertwined your timeline with his or hers. And from that point on, if you do genuinely love someone, you are victim of where his or her timeline will lead yours.

Distance is a difficult thing to cope with. If you’re apart from someone you truly love, it feels as though you’re constantly too far. But when you’re always together, it then appears that you need space from one another. Again, is either of these right or wrong? I think not. If your partner needs space, do you love him or her enough to trust what they need and give it to them? And are you then forced to merely hope that their choices and timeline again lead them back to you? Or do you fight harder because the thought of losing them is too difficult to bear? I honestly don’t know what to tell you. I think both are correct. I had a friend who was head-over-heels in love with a girl, and he felt like he was losing her at a rough point in both of their lives. He fought and fought and fought for this young woman. And he failed. I told him, “Sometimes struggling relationships are like trying to catch a fish barehanded. If you squeeze too hard, they’ll slip out of your hands.” He replied with saying that if you didn’t try hard enough to hang on, you wouldn’t get the fish anyway; so what’s the point? That was a damn valid argument.

I suppose if you squeeze too tightly, the fish will learn not to come back to you and swim away for good. But 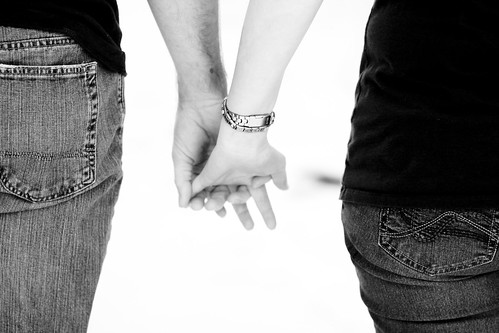 if you let it lightly slip away, at least you know what a good fish looks like for when the next one comes along. And hey, a little hope and faith to this predominantly sad excuse for a blog, fish do swim back upstream. That said, there are plenty more fish in the sea.

A long distance relationship is either like stepping around a lot of puddles on a rainy day—annoying and not ideal—or it’s the daunting task of climbing a mountain in hopes of reaching the other side. Either way, if you truly love someone and are more than just compassionate about the idea of having a significant other, you should do whatever it takes to be with whom you love. Me? I’d walk around as many puddles as it takes until I reach the mountain I’d have to climb. And then I’d climb it.

We are all different—just mere organisms in the universe trying to thrive and grow. Our lives don’t always work out how we want and there’s nothing we can do about that. Very little about life is controllable. But we do have choices and can control how we react. As for distance between couples, if it feels right, make it work. If something is missing and the light at the end of the tunnel is fading, figure out what you need to do to fix yourself and get back on track. Or don’t. Like I’ve said in previous posts, we all need a support system of individuals who care about us. In my personal opinion, nothing about love is right or wrong. It’s either there or it isn’t, and it either works or it doesn’t. But alcoholism isn’t cured by locking someone in a room with a bottle and waiting for them to figure out on their own if they’ll make mistakes or not.

If someone means enough to you, you’ll find a way to make it work. Because if you mean enough to them as well, he or she WILL wait for you to swim back upstream.