The northwest suburb of Arvada is growing immensely as a plethora of diverse restaurants and bars enrich the food scene of this town. The people of Arvada are accustomed to driving either to Denver, Boulder or other more established cities to indulge in different foods. Now, all are playing catch-up as they scramble to try all the new and exciting options. Another meeting place, filled to the brim with unique and new foods opens soon and acts as Arvada’s first food and drink hall. Freedom Street Social plans to commingle different cuisines together to engulf visitors with new flavors while providing a place for newfound community and conversation.

The idea for Freedom Street Social was formed by a group of partners — Nick and Amie Costanzo, Jeff Kaplan, Jon Morgan and Cameron Cummins. The group purchased the land in 2020, right before the lockdown. Cummins shared the idea to make the space into a food hall — a place to test different brands located around the country and in turn, help them grow. Construction began and the greater purpose of this spot was formed.

“It’s definitely going to be a place where we want to serve the community and provide whatever they want. It could be a farmer’s market, we are going to roll out yoga, spinning classes. We want it to be inclusive for everybody,” Cummins said.

Freedom Street Social, specifically the name, is a homage to Costanzo’s mother. “Nick and his sister, Gina, when they were young, she passed away. So instead, they spent a ton of time at their grandmother’s house, and she was Italian and a great cook. It became the hub or center of the community where their friends all hung out,” Cummins said. “We call it Freedom Street because it’s the street that his grandmother lived on.” This deep meaning is what motivated the team to create a new epicenter of the community, where everyone is welcome to gather, eat and converse as if it is their own grandmother’s house.

The eateries that will soon call Freedom Street Social home are the real stars. With nine different vendors, this hall has a choice for all ages and every craving. Sushi Kuro will satisfy any seafood craving and experiments with sushi burritos, dumplings and more. The BKFST Club creates that farm-to-table taste and is curated by Chef Tajahi Cooke. Both Lea Jane’s Hot Chicken and Johnny Good Burger are sure to attract all with mouthwatering meats and side dishes. Osito features colorful Latin cuisine paired with juicy cocktails. Grab some Chicago-style pizza right here in Arvada with Giordano’s Pizza, world-famous since 1974. Build your own Asian-fusion bowl at Balance Pan-Asian Grille while snacking on a sweet treat from Jeremiah’s Italian Ice. Last but not least, Freedom Street Social has all the caffeine addicts covered with Pressed Coffee and Vinyl, a combination of delicious coffee drinks and music. 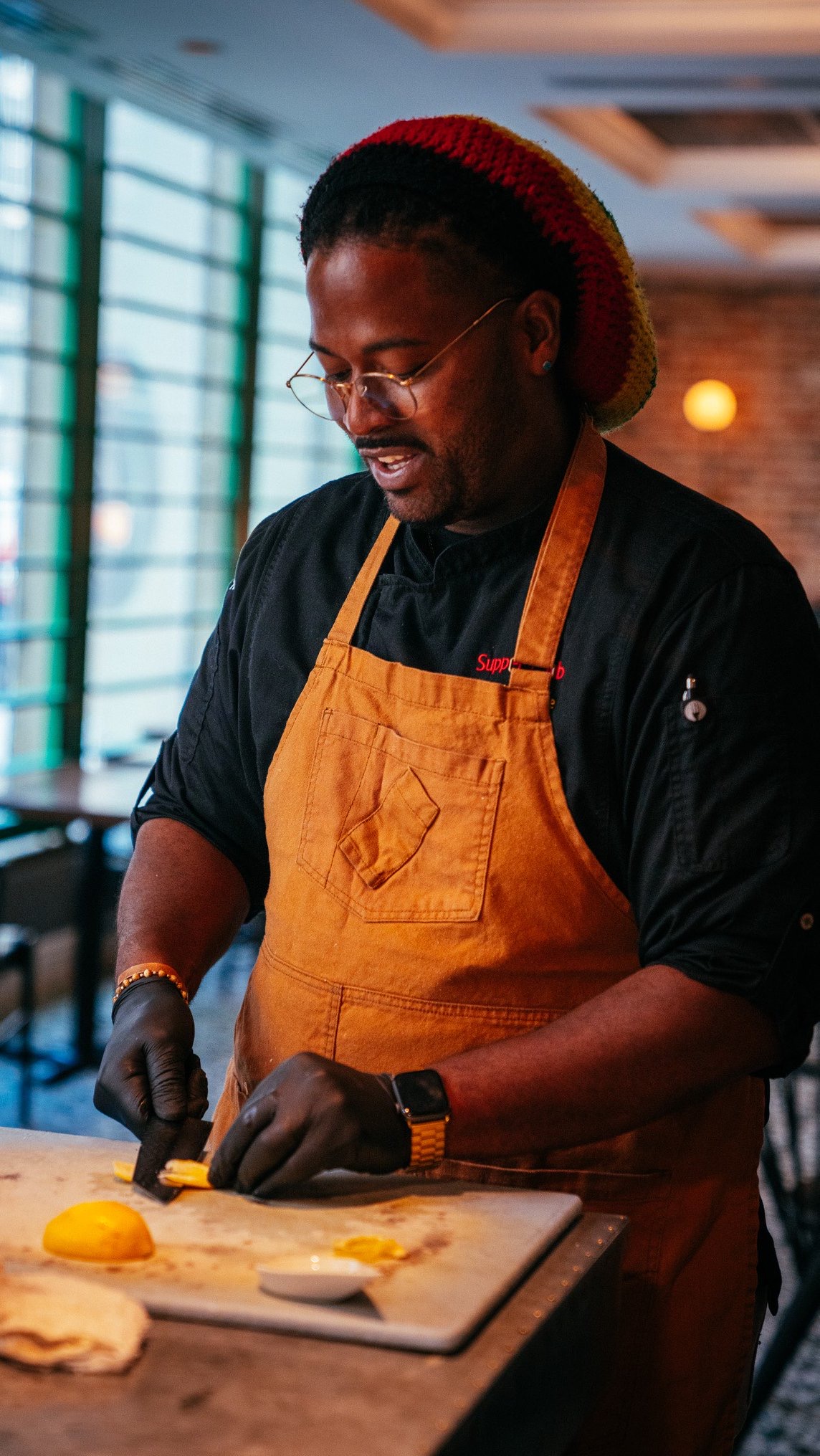 Extending its mission of inclusivity, Chef’s Kitchen is a new and exciting concept brought to Arvada by Freedom Street Social, Chef Tajahi Cooke and Gertie Harris. The idea sprouted out of The Supper Club, a monthly pop-up series that began during the pandemic to unite the community through food. Chef’s Kitchen is a one-month culinary residency for creators from all around the country or found in our own backyard. They will have full control of the menu for a month and start operation with a two-night ticketed Supper Club, mentored by Chef Cooke.

READ: Tajahi Cooke Continues To Create Community Through Meals at the Supper Club

“We’ve got these other incredible vendors, but it’s so important that we have something that’s for that fine dining crowd as well. We want the foodie community to come in and seat themselves while keeping it fresh by having a different chef in every month, and we have the opportunity to do that,” said Harris. This program is something unique to Arvada and gives locals the convenience of feasting on diverse cuisine in their own backyard. It also gives chefs the ability to learn, experiment and establish themselves in Denver’s food scene.

Freedom Street Social will soon bring Arvada something that’s never been done before. Whether you are craving an early morning coffee, an easy lunch spot or a regular date night hangout, this food hall has it all. Although opening dates are still up in the air, the team is looking at hopefully opening to the public in July. Keep watch for opening announcements and events hosted at Freedom Street Social soon.

Freedom Street Social is located at 15177 Candelas Parkway, Arvada. Opening date is yet to be announced.