On Jan. 12, 15-year-old Cade Arvin was going on a walk to Sloan’s Lake from his father’s house. He was walking through the intersection crosswalk at Colfax and Wolff when he was struck by a driver.

Pedestrian crashes and fatalities have drastically increased in Colorado since 2008. Sam Cole, the communications manager of the Colorado Department of Transportation (CDOT), cites a 79% increase in crashes since 2013. In 2021, 92 pedestrians were killed in traffic crashes across Colorado, accounting for more than 13% of all Colorado roadway fatalities.

In February, as a response to the growing pedestrian death rate in America, the Federal Highway Administration issued a new mandate stating that “if vulnerable road users (walkers, bikers or those using mobility assistance) make up 15% or more of the total number of fatalities in a state in a given year, the state is required to dedicate at least 15% of its Highway Safety Improvement Program (HSIP) funds the following fiscal year to projects that address the safety of these road users.” These funds can be used to create protected bike lanes, sidewalks and crosswalks.

Arvin, accompanied by his mother, Rachel Hultin, delivered custom-made LED signs to local businesses along S. Pearl Street in Denver on Feb. 28 to launch CDOT’s newest pedestrian safety campaign. The signs are illustrated with the outlined image of a pedestrian walking and are currently glowing in the display of storefront windows.

“The point of this campaign, ‘I’m Easy to Miss,’ and having pedestrians lit up in neon is because we see most of these crashes happening at night, and both pedestrians and drivers have to be extra careful at night,” Cole said.

Three of every four pedestrians killed on U.S. roads in 2018 were struck in darkness, and those fatalities account for the majority of the overall increase in pedestrian fatalities since 2009, according to the AAA Foundation for Traffic Safety.

“It’s easy to become distracted while driving, which is what caused my crash, but it is incredibly important to put the distractions away,” Arvin said in a statement. “I was lucky to survive, which is why my mom and I are dedicated to raising awareness for drivers to look for pedestrians. I hope that these signs make drivers think twice and look twice when they are behind the wheel and that this campaign prevents other pedestrians from getting hit.”

The rise in pedestrian-related crashes has a lot to do with an increase in reckless drivers, Cole said, whether that be people on their phones, speeding or operating a vehicle impaired.

Amongst the businesses displaying the “I’m Easy to Miss” sign is Kaos Pizzeria.

“We want to keep people safe in our community and this message is close to home since Kaos employees often bike and walk to work,” Riley Dorway, the owner of Kaos Pizzeria, said in a statement. “By displaying the neon signs, we want to remind drivers to always look for pedestrians.”

Hultin, the sustainable transportation director for Denver-based nonprofit Bicycle Colorado, works to ensure that transportation agencies prioritize investments that make Colorado a safe place to walk, bike and connect with transit. Prior to Arvin’s crash, Hultin assisted CDOT in developing and finalizing their pedestrian safety campaign message. Cole reached out to Hultin again looking for a spokesperson, and the timing was coincidentally only a week and a half after her son’s crash.

Arvin brings a young face in the community to this campaign that shines a light on the dangers of distracted driving and the importance of staying alert on the road. Through this campaign, all parties hope to raise awareness for drivers to keep an eye out for pedestrians, especially at night when they’re hard to see. 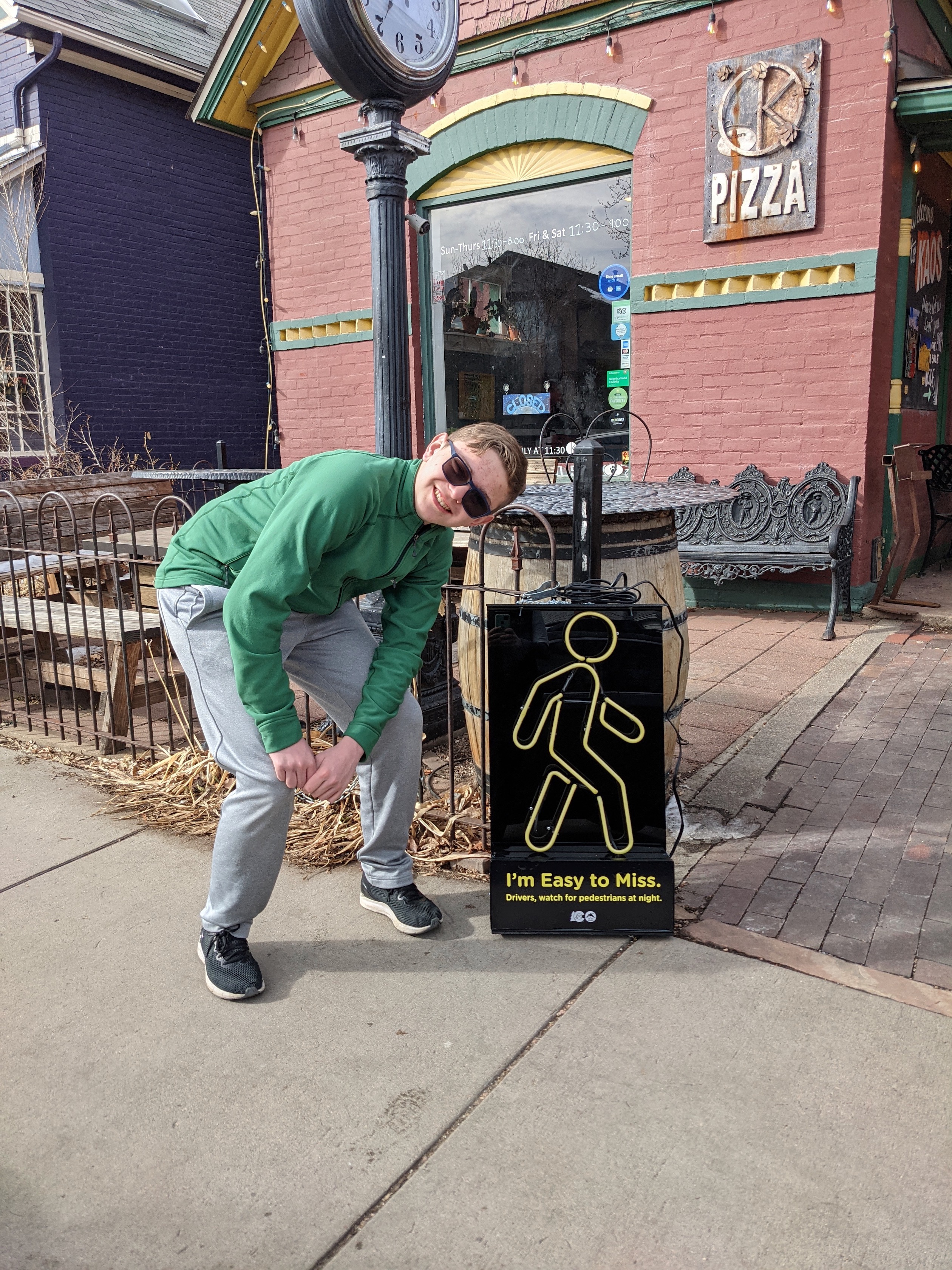 Hultin pointed out that as much as people don’t want to be the victim of a pedestrian car crash, no one wants to be the driver in a collision either.

“One of the things that came out of Cade’s story that I think isn’t talked about enough is that no one wants to be the driver that hits a pedestrian,” Hultin said. “We talk about the victimization of pedestrians being hit by people driving cars, but it really impacts drivers, too. Nobody wants to live with that. So for everyone’s interest, we should drive carefully, abide by the speed limit and keep our eyes open for pedestrians.”

Cole stated that responsibility shouldn’t be placed fully or exclusively on drivers or pedestrians. Ultimately, the de-escalation of this problem will come from a combined effort of both drivers and pedestrians being more careful on roadways, which includes using crosswalks, not crossing midblock and eliminating driving distractions.

Although Arvin feels it’s scarier to cross the streets after his crash, he said that it makes him feel safer knowing that the state agency cares about pedestrians and is taking steps to raise awareness. 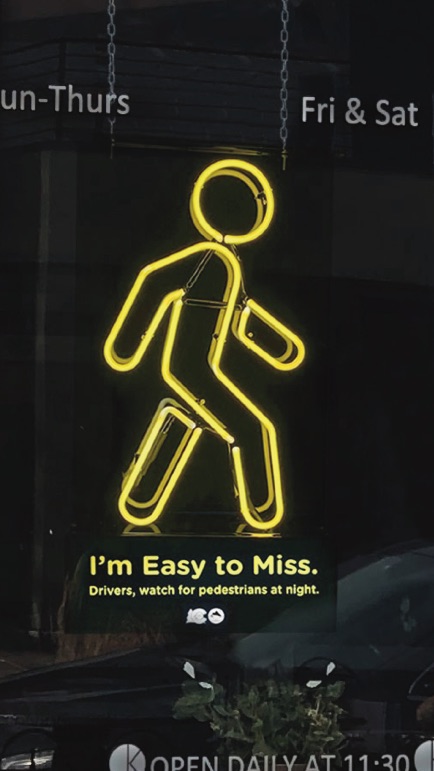 The funds for the “I’m Easy to Miss” project with CDOT are limited, so Bicycle Colorado will step in and continue the initiative in other neighborhoods. They will eventually pick up the signs from S. Pearl Street and place them in new locations with the goal of spreading this program throughout the state of Colorado. They are looking to place the signs in three to four more communities this year at locations with high visible pedestrian presence, vulnerable road users and businesses willing to partner.

“We’ll continue placing the signs as long as the signs are working and as long as we can find willing quarters to host it,” Hultin said.