The Marijuana Mansion’s doorway remains unfinished, a choice purposefully made by the new owner and Creative Director, Lisa Leder. The door itself wears a weathered surface that matches the sandstone exterior and stained glass windows. As a whole, the mansion is a standing symbol of a time passed in the history of Denver.

When you walk in, not only do you travel back in time but to a whole new dimension. Grand staircases lead to rooms that have been turned into time capsules. Bookcases open up to reveal secret rooms. The Marijuana Mansion screams opulence and whispers tales of ghosts.

Now, after its grand reopening in June, it is an homage to all things cannabis and its influence throughout the decades in music, art, design and politics. It’s a perfect blend of museum, private venue and art exhibition for local and tourists alike. “When we walked in and heard the name Marijuana Mansion, we thought that was so cool”, said Leder, recounting the day she took an interest in buying the property. “And then when we saw the dispensary in the back… it all just clicked.”

From Cresswell to Marijuana Mansion 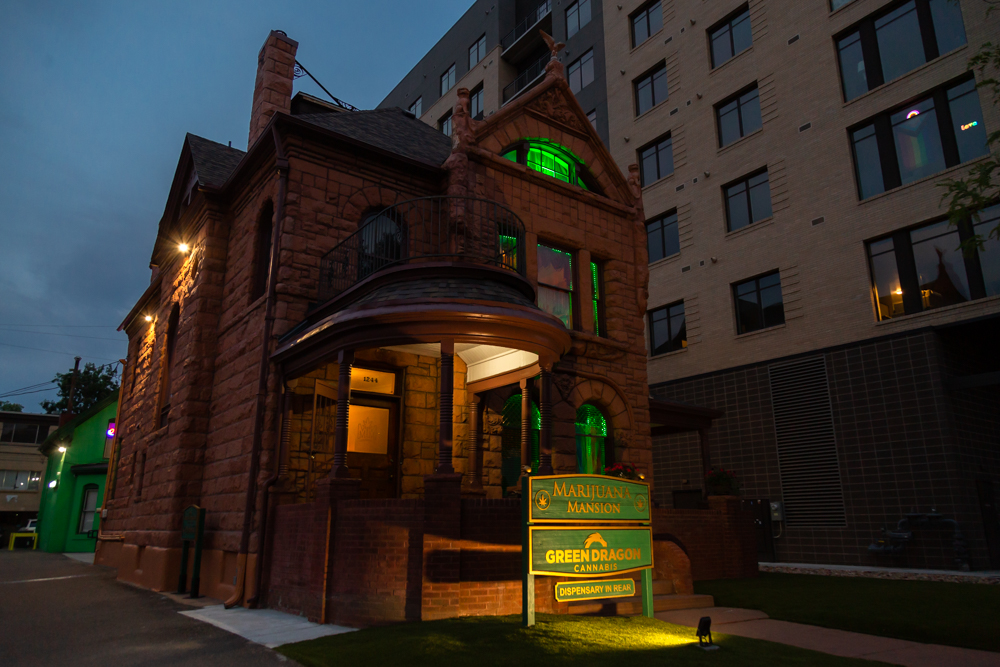 The three-story mansion located at 1244 Grant Street has a rich history that goes back to the late 1800s. Built for Joseph Cresswell and his family in 1889, it was originally known as The Cresswell Mansion. Cresswell was a local businessman who worked with the chamber of commerce to promote the city’s manufacturing industry.

Designed by local architect John J. Huddart, the manor displays influences of what is considered “high Victorian” architecture. Today, it is one of the last original buildings from what was known as Millionaire’s Row at the end of the 19th century. In 1975, the city designated it as a historical landmark.

The Marijuana Mansion gets its present-day nickname from recent history in Denver when it became the headquarters of the Marijuana Policy Project. It was inside the mansion where Amendment 64 was written, the measure to legalize marijuana in the state. The legislation passed on November 6, 2012, making Colorado the first state in the U.S. to legalize weed. Additionally, the cannabis law firm Vicente Sederber got its start at the mansion before beginning to work alongside other industry pioneers, like The National Cannabis Industry Association.

After that, its new name might as well have been carved in stone. 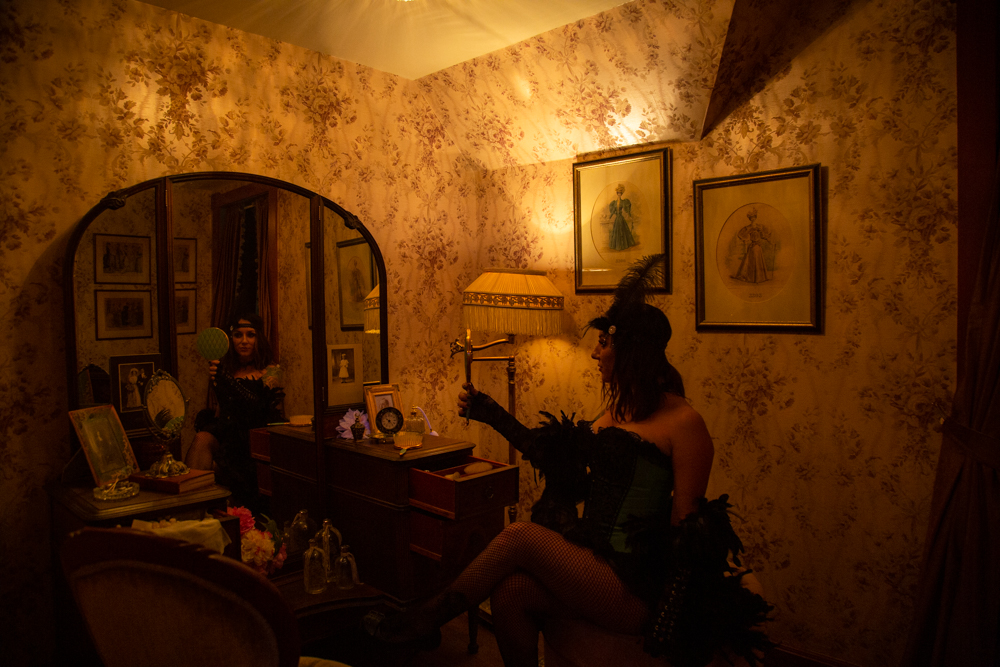 In 2019 Lisa Leder, who owns a real estate and interior design firm, bought the building for $1.2 million. Like most new owners, she started discovering secrets about her newly acquired property. Primarily, she found out what many already seemed to know – the mansion is haunted.

Leder recounted the first time she found out about this significant detail. She was inside the house before renovations. Cardboard, dust and old desks gave the space a particularly eerie feeling. “I was up here alone and I was looking out the window and I saw a group of people come up pointing at the mansion,” Leder said. “I came down and asked what was going on.”

She learned that her property was part of many Denver ghost tours. Rumor has it that a ghost can sometimes be seen looking out the upstairs window. It wasn’t long before Leder’s team experienced paranormal events as well. “There’s one closet that the ghost is always banging on,” Leder said. “Typically he, or she, likes to bang on it when there is loud music. I guess the music bothers them.”

Additionally, Leder found a doorway in the basement that seemingly leads to the carriage house in the back, which has been turned into a dispensary. However, the tunnel was sealed shut on both ends with a cinderblock wall. No one can get through it from the manor or from the dispensary. No one knows why it was sealed or what’s inside.

Welcome to the Marijuana Mansion 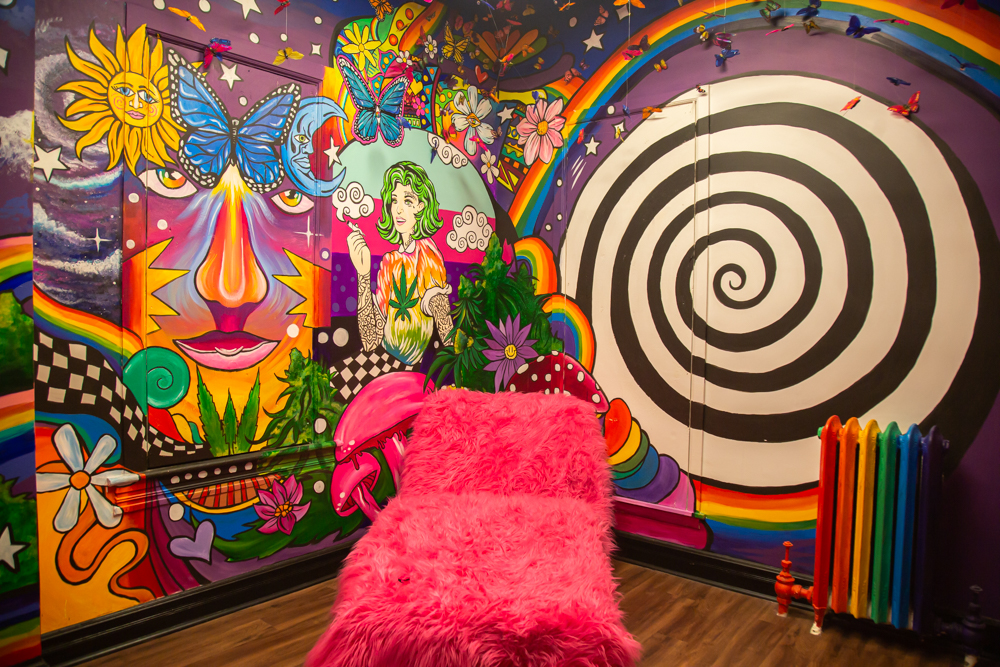 Mary Jane in a Marijuana Wonderland, Photo by Brandon Johnson

Whether the ghostly residents were happy about it or not, their 130-year-old house was about to get a makeover. Over the next six months, Leder invested over $500,000 in the mansion’s renovations. She worked alongside local female artists Ellie Paisley, Ally Grime and Shannon Barber to turn the space into an eclectic museum-art exhibit hybrid.

Each room is curated to a certain time and ambiance. The Vintage Parlor Room on the second floor will take you back to the 1800s. Vintage trinkets and a red velvet settee create the mood for an elegant hang. But the room, much like the mansion, has its secrets. The bookshelf on the right wall opens up to a dark hidden chamber, The LED Room, lit with a black light and adorned with futuristic colorful furniture. A link between the past and the present. 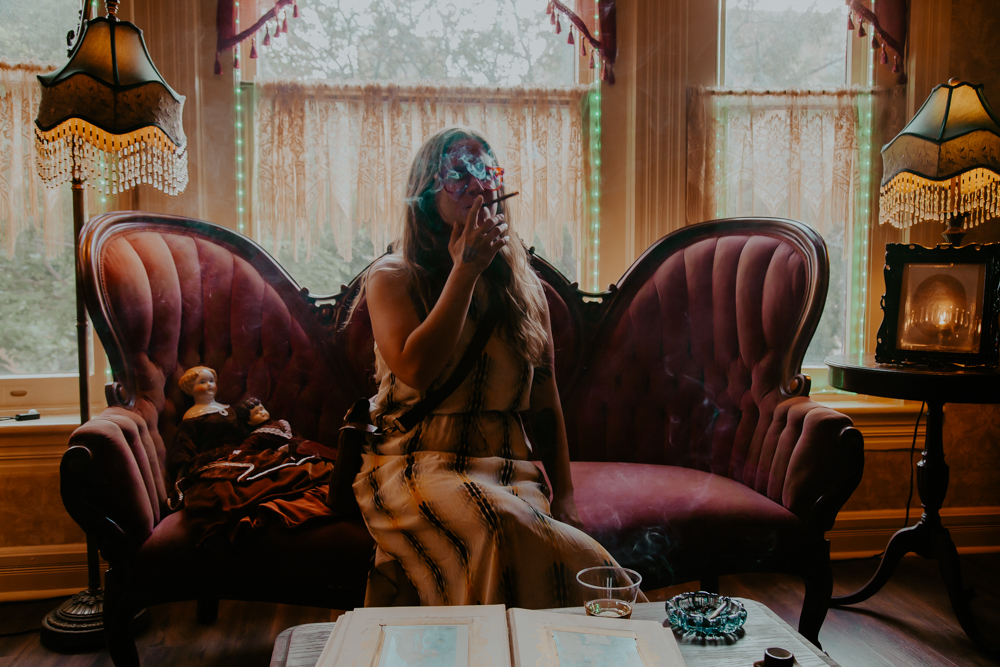 “Every room has a reason and a meaning as to why it’s here,” said Leder. “Plus it’s cool.”

The surprises keep coming. Every room is intricately designed, peppered with vintage items and odd findings Leder scouted for in multiple vintage shops in Denver. It would take several visits to the mansion to fully appreciate every detail.

Even the mansion’s Event Director, April Emma, is always astonished by the layers of the design. “I’m here every day and every day I find something new.” 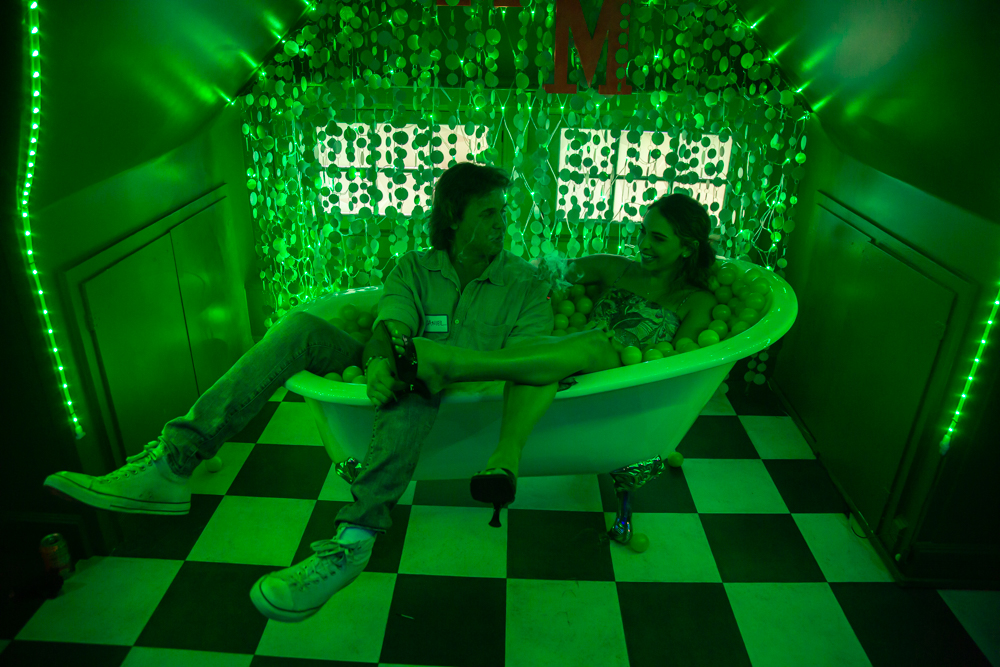 Every room has a theme and a soundtrack that goes with it, from a ’70s-inspired record room to a Morrocan hashish lounge.  But they are all connected by one thing – weed. No matter what decade or time inspired each room, they are all perfect settings to sit back, smoke and hang out with friends.

“When you go to a club and it’s 10,000 feet square and you’re a small group, you feel weird,” said Leder. “Here you can always feel cozy. So people can kind of break apart and it’s COVID friendly.” 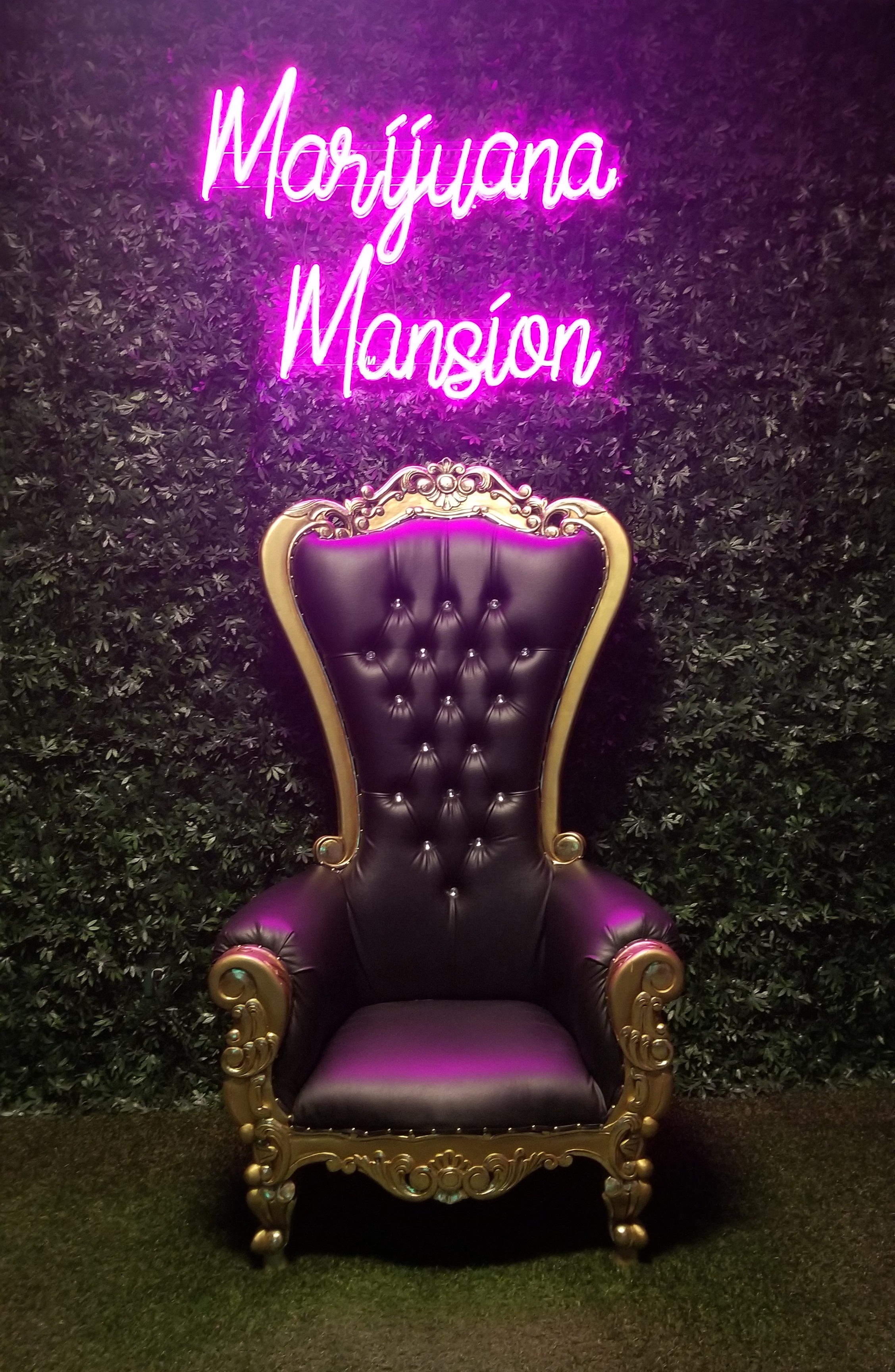 The mansion is a character in itself and the perfect background for photos at the same time. The Weed Room is one of the most popular rooms for Instagram selfies and Tiktoks. Marijuana leaves cover every wall, creating a wild jungle vibe. On one side, a throne sits under a neon sign that reads Marijuana Mansion. On the other side, a wooden swing hangs covered in vines. All the while, hip-hop tunes set the mood for a photoshoot where one comes out looking like the queen of, well, everything.

Adjusting to the Pandemic 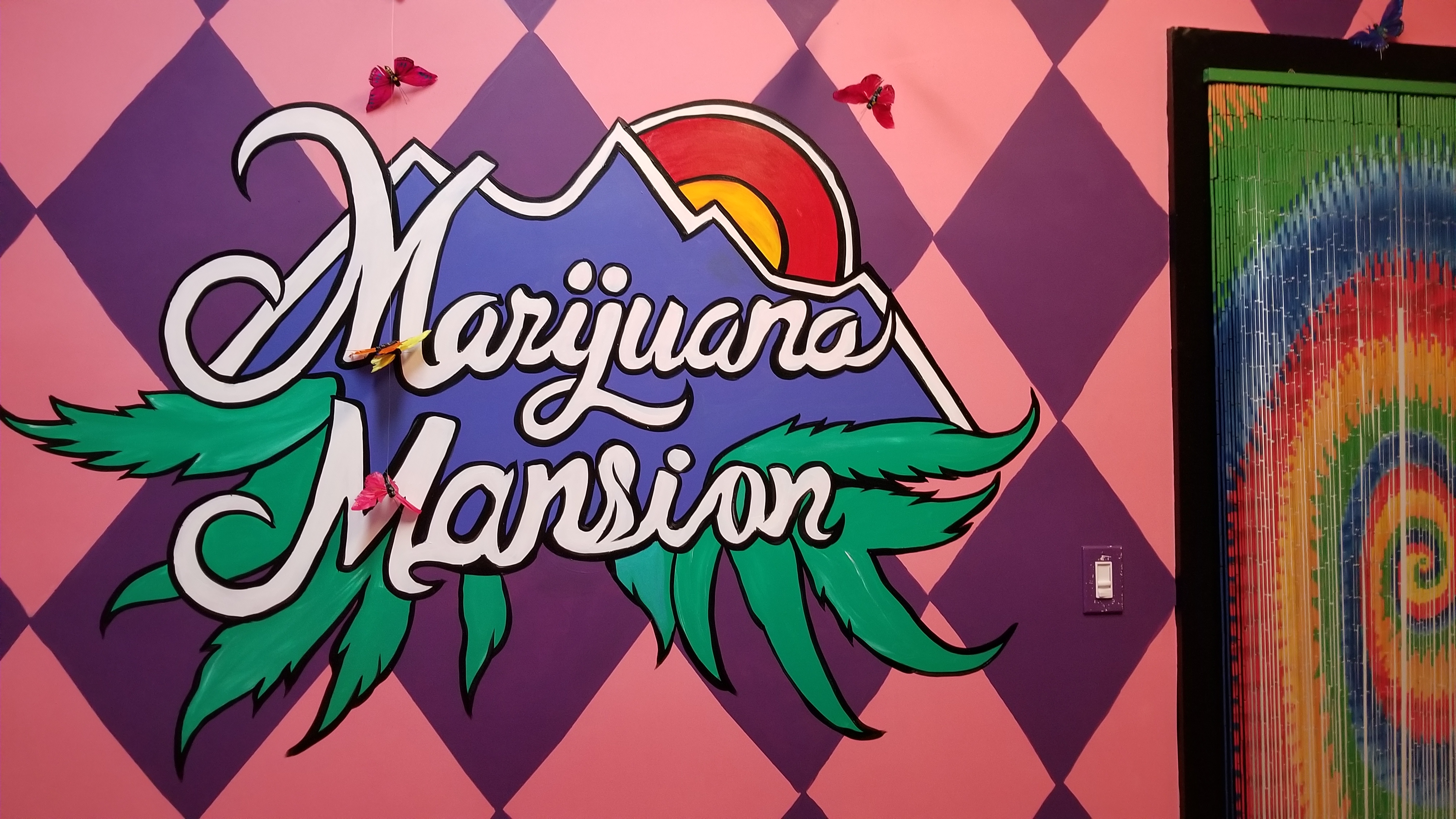 By March of 2020, the Marijuana Mansion was ready for its grand opening but the pandemic made it impossible to carry on with the party. Unable to book the mansion for private events, Leder was forced to think outside the box. That’s when the idea to book the place for tours and photoshoots came to mind.

“Originally we were just going to be an event space,” said Leder. “I didn’t know people would want to do tours.”

The idea was that tourists seeking cannabis-themed activities would finish their tour at the mansion. There they could enjoy the tour and smoke in the private space the tour company leased. The response was overwhelmingly positive. “People were blown away”, said Leder. “Because I just did it as a labor of love hoping people would like it but when people came they thought it was awesome.”

Since then, tourists have learned about the Marijuana Mansion from word of mouth and posts on social media. Guests can tour the mansion for $35 and book the entire space for a 2-hour photoshoot for $500.

While the tours are escalating in popularity, the mansion’s true purpose is to host private events for social consumption, something the team is looking forward to now that the COVID-19 restrictions have loosened. “We were thinking a lot of different cannabis brands and companies could come here and throw parties, weddings, birthday parties, bachelor parties. A little bit of everything”, said Emma.

Looking to the Future

While the Marijuana Mansion would undoubtedly be the perfect place for social consumption, regulations do not allow it to be open for consumption unless it is booked for a private event. The state’s 1,000-foot rule specifies that no one can publicly consume or sell marijuana if the location is within 1,000 feet from schools or daycares.

However, this has not dampened Leder’s vision of what the mansion could do for Denver. “At this point, we are fine operating as a private event space and we can still do consumption if it’s rented as a private event“, said Leder.

Locals can listen to live music, enjoy comedy nights, practice yoga and be a part of any private community event where social consumption follows the guidelines. After its grand re-opening, Leder hopes that more locals will discover the mansion and love it as much as tourists have. “As a local, I’m always looking for something to do. So I feel like locals will really appreciate it,” said Leder.

It’s only fitting that, after pioneering the legalization of Marijuana, Colorado would have its own Marijuana Mansion, where locals can enjoy an immersive experience that combines art, ghosts, music and, of course, cannabis.