14 Food Trucks You Need to Check Out This Summer

Patio seating and enjoying a meal outside has become commonplace as of late, and with new orders inside dining is available at many restaurants. But, with the temperatures rising and Denver continuing to boast its sunny skies, people will most likely want to remain outside. The summer months bring festivals and new ways to get outside, one of the best being getting some tasty eats out of a food truck. Much like Denver’s restaurant food scene, its food trucks exude the same quality and diversity. Over the years, there have been more than 500 trucks to graze through the Mile High City, but here is a list of new, old, savory, sweet, and all things in between to make the summer months delicious. 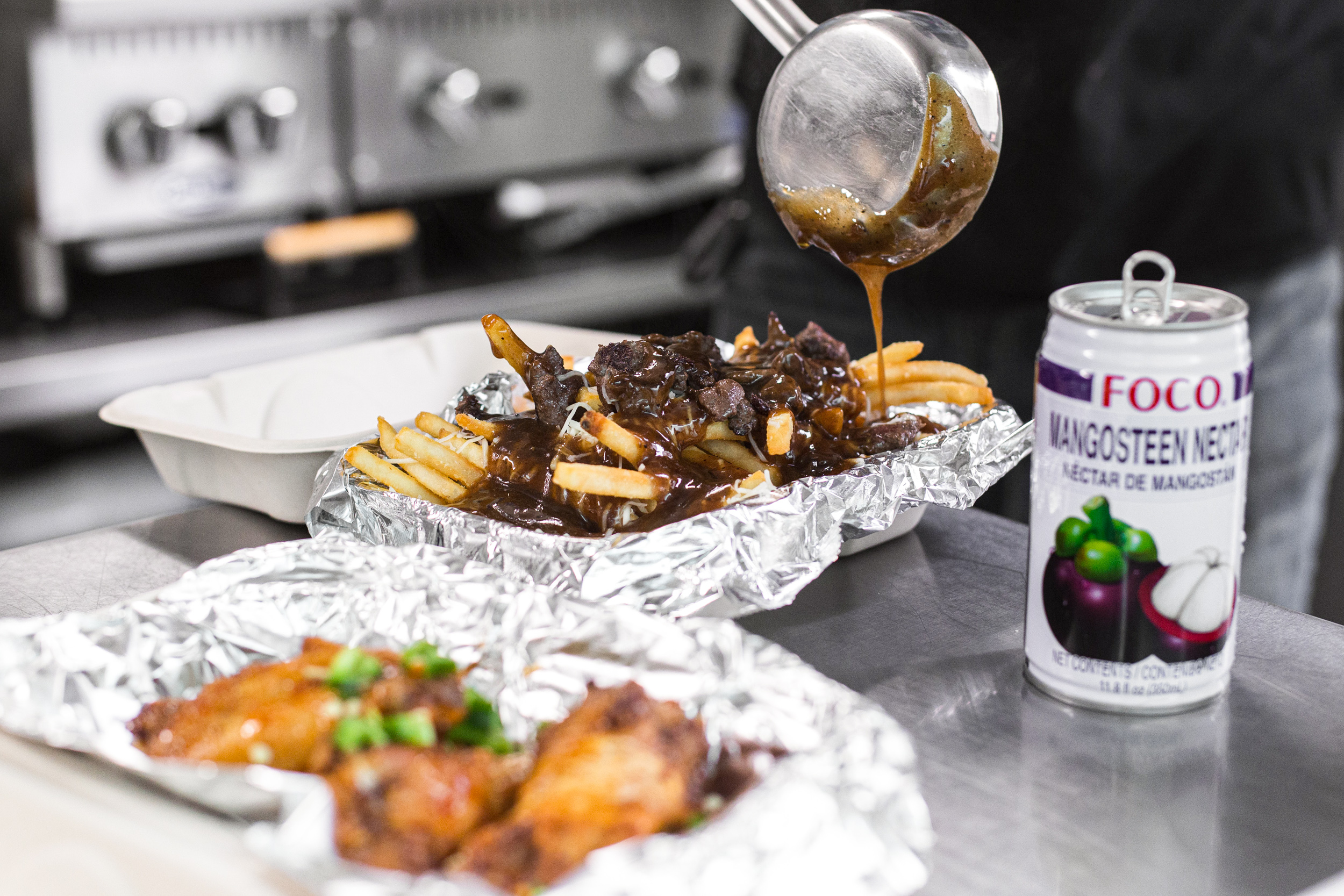 The Lowdown: It’s not all Pho and games at this truck, instead, they are trading in their soulful winter soup for sandwiches instead. The traditional banh mi sandwiches have both pickled and fresh vegetables, a touch of herbs, and a pick of protein. Currently, the menu is playing around with beef treated similar to birria, leaving it succulent and tender. It also has a chicken plate that has earthiness from lemongrass, tons of aromatics from garlic and some heat from chili crisp. They keep fans updated on location and menu through Instagram or their website. 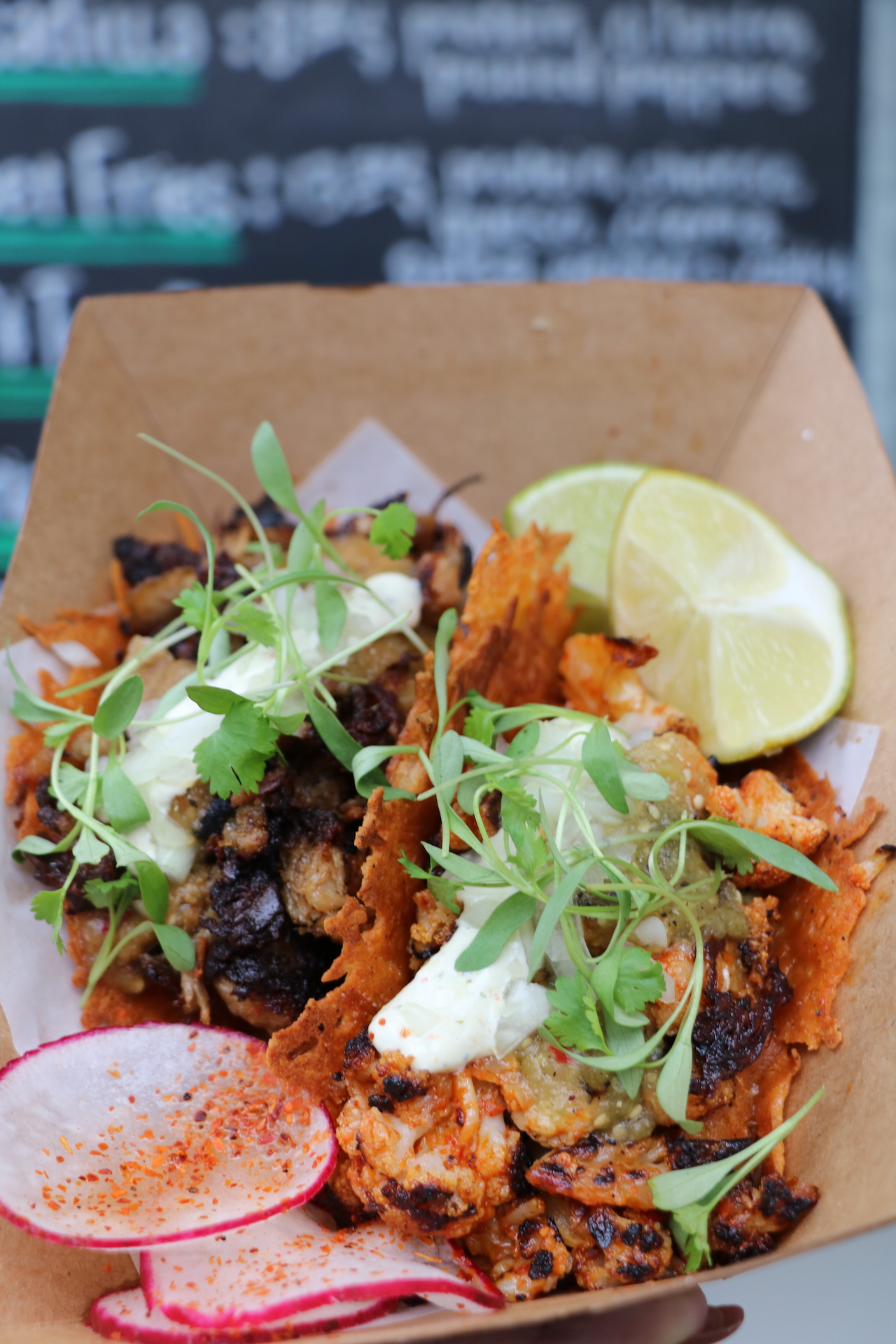 The Lowdown: Rather than being another taco truck, Carreras is bringing all the west coast-influenced Mexican food that they grew up together with. This means burritos have crispy fries rather than fluffy rice. They even offer a surf and turf option for those missing the waves coming in from the west. The queso tacos begin by spreading a layer of cheese on the flat top grill, waiting for it to melt, then adding on the corn tortilla to stick to it right at the end. It leaves a crunchy cheese layer to hug in all the fixings. Their website is the best way to know where to find them next. 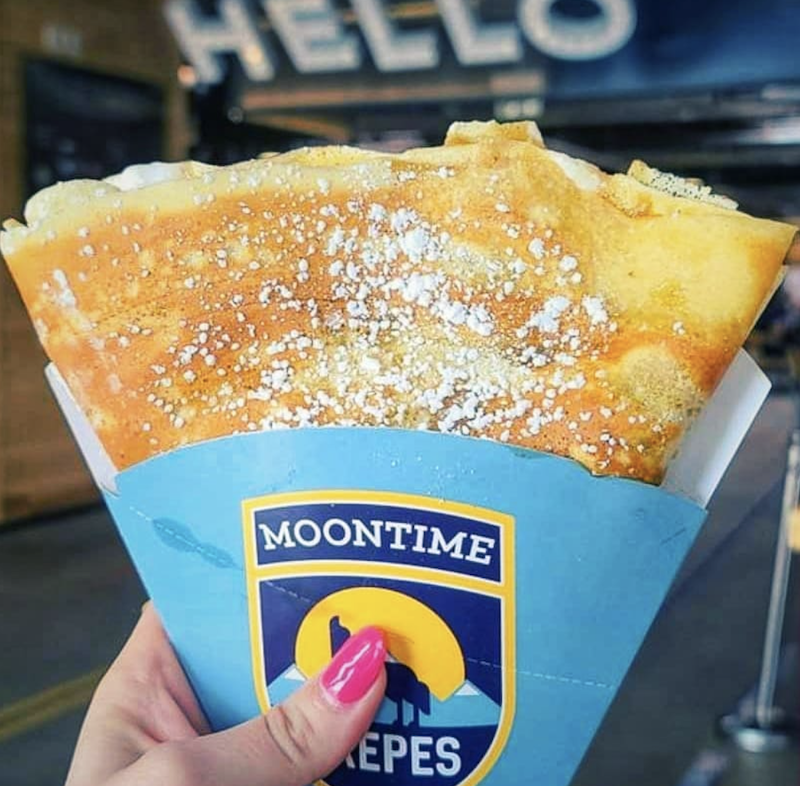 All sweet crepes are dusted with powdered sugar at the end. Photo by Moontime Crepes.

The Lowdown: Crepes fit easily into their handheld sleeve and make walking around with them a breeze, so it’s not difficult to understand the accessibility a crepe truck brings. It makes sure to have both sweet, savory and brunch options so that there is never a wrong time to dig into one of the crisp pancake shells. Traditionalists will make sure to order the Nutella, strawberry, banana and a finish of whip cream. Even some of the savory picks have notes of sweetness, like the raspberry preserves in the Monte Cristo filled with ham, turkey and brie. Others have tons of brightness from the garden of vegetables wrapped up inside and get extra earthiness from the pesto to finish it off. Their Truckster account is the best way to know where to find them next. 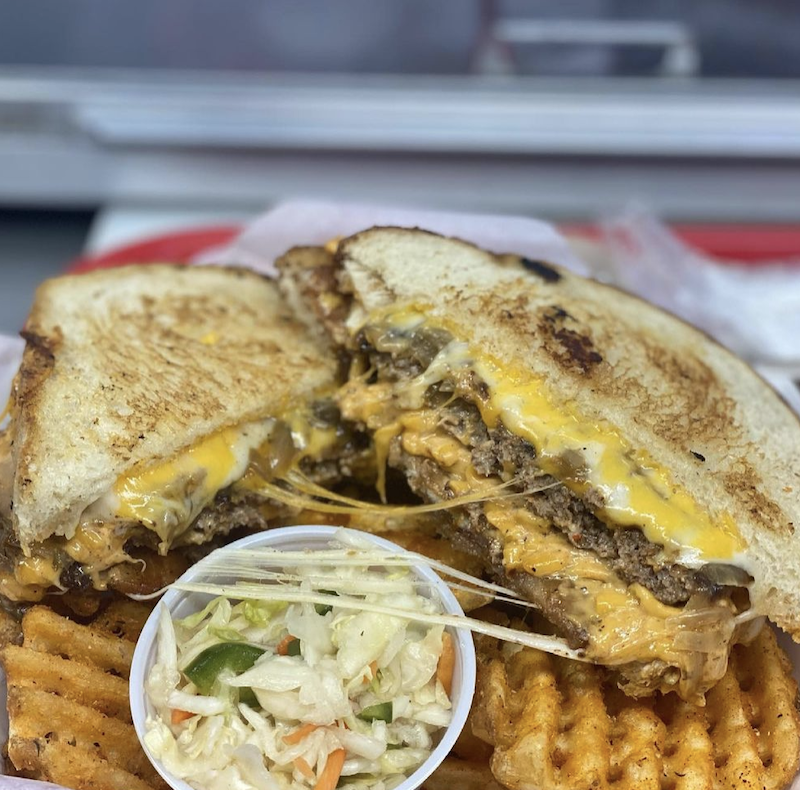 The Lowdown: This truck went big after winning Food Network’s “Great Food Truck Race – Holiday Hustle” (season 11). The entire time they did it with a tribute to Colorado as they claim their food to be Colorado comforts that draw on the southwest, with green chili being a staple on the menu. They make their own version of poutine by replacing the beefy brown gravy with the heat of green chili. The big stuffed burger – of buffalo, chorizo and beef – fits the bill weighing in at a half-pound. They love setting up at a brewery because the local beer is the inspiration for their dessert fritter. Their website is the best way to know where to find them next. 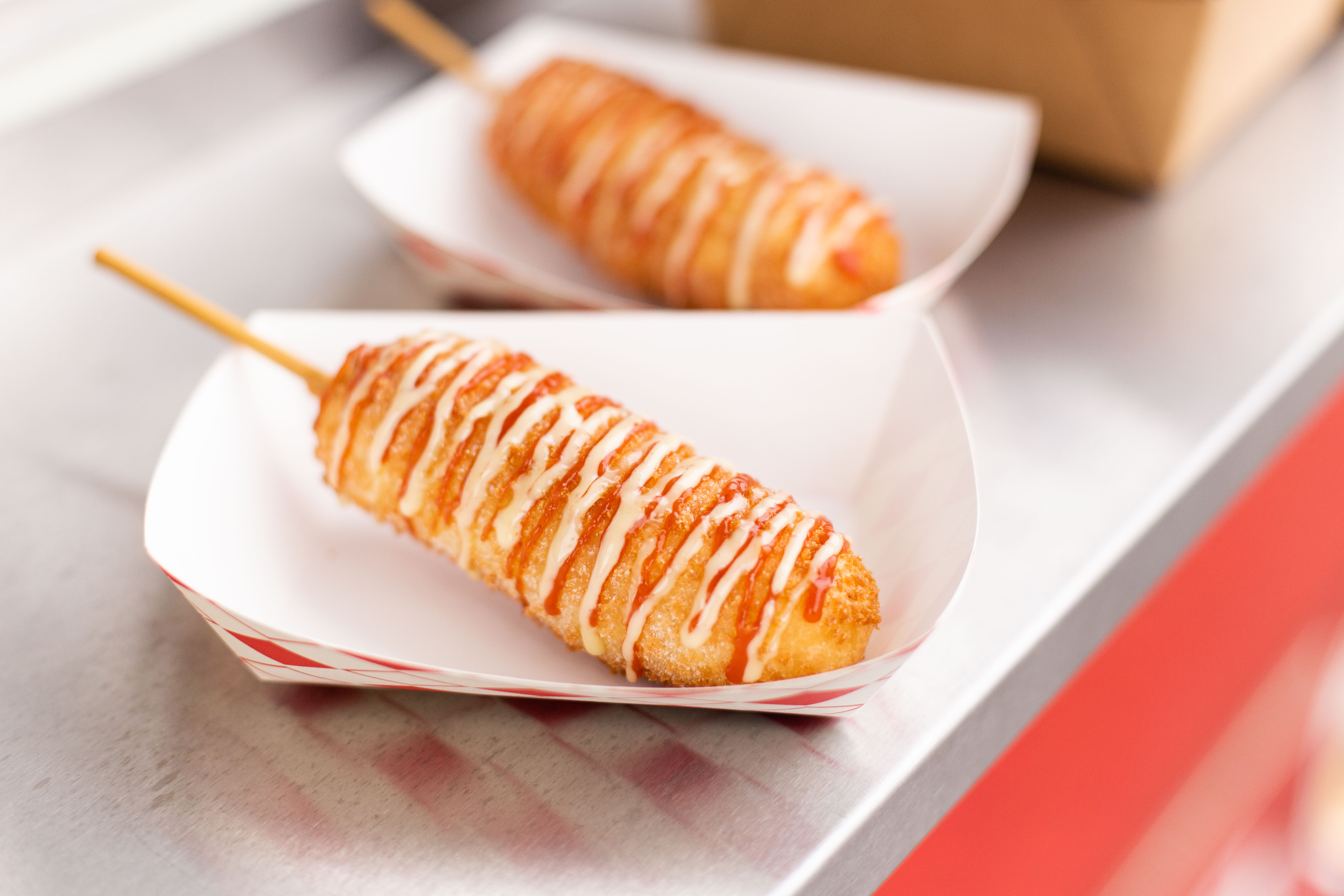 The Lowdown: This truck operates by way of a culinary family, where both mother and daughter can often be seen running the show. Together they can create fun takes on Korean fare. Scallion pancakes convert into the likes of a tortilla as it’s meant to hold in a fried egg, a protein of choice, basil and extra scallions. The flakiness is similar to a croissant and it makes other wrapping agents fail in comparison. A popular item takes the shape of a corn dog but rather is a cheese stick fried in a tempura batter – with a cheese pull that never wants to break. Their Instagram is always updated with their next location.

My Friends and Pie 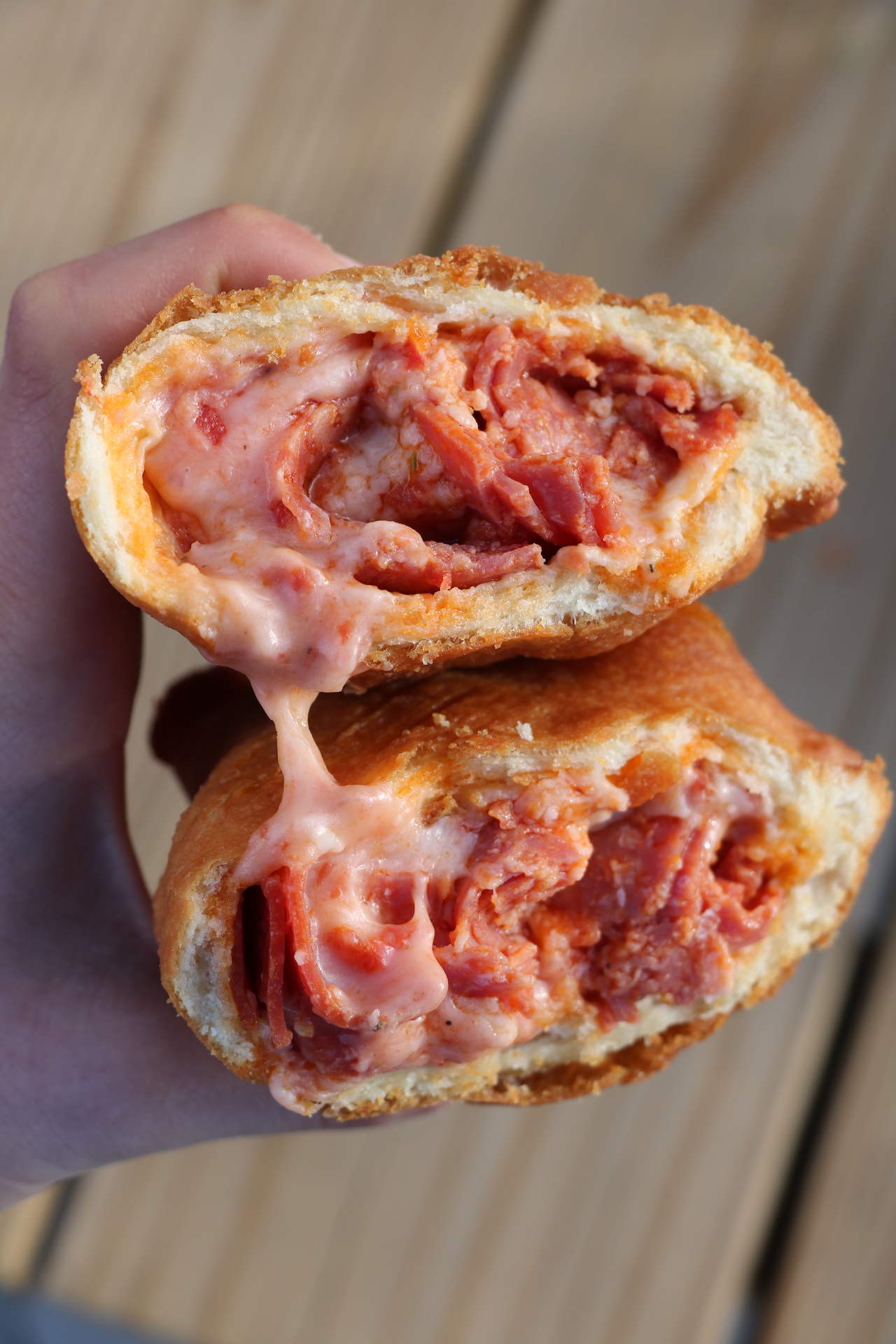 The Lowdown: Each hand pie held was curated thoughtfully to embody a friend of the food business owner named Devon Hill. It’s a fusion of a New Zealand meat pie and an all-American classic – the Hot Pocket. The pillowy, flakey crust is able to hold in the oozy cheese of the average joe pizza pie or the cheeseburger. While most pies are tributes, the one named after herself is known for being on rotation. Their sweet pie is even a bit unexpected as it is a mash-up with a brownie rather than fruit. Since dogs are a man’s best friend — homemade dog treats are made as well.  Their next stop can be found on their website. 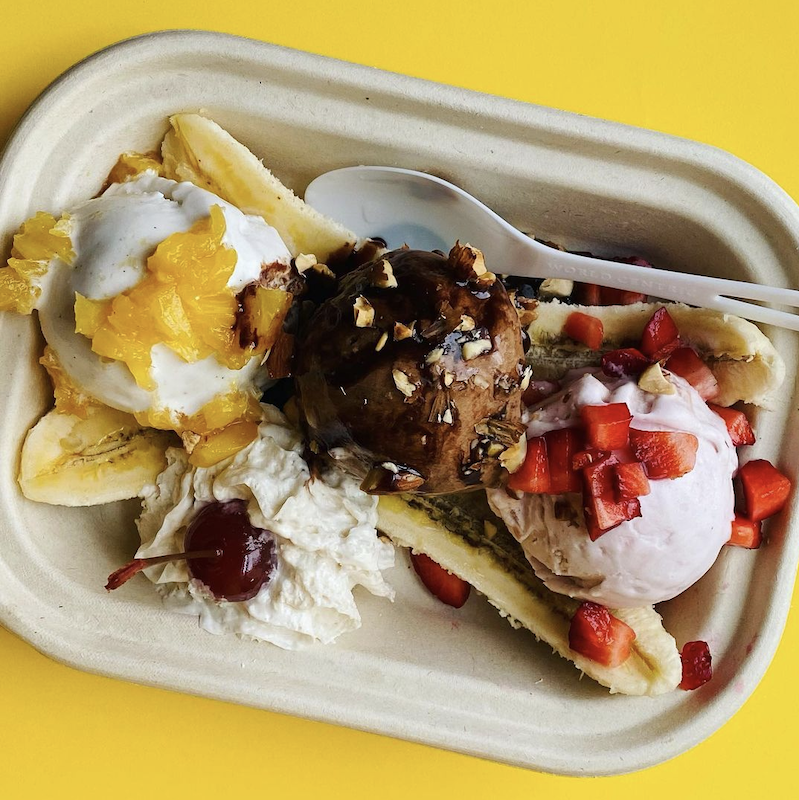 Vegan banana split. Photo by Best One Yet.

The Lowdown: This list has to include at least one frozen treat. The intention of this business was to create ice cream that everyone could enjoy. It put Helen William – founder of Best One Yet – up to the test for creating the best vegan ice cream. Every time she made a new flavor her boyfriend would excitedly state this is the “best one yet” – so she continues to build on her fun pint collection. Ice cream flavors include peanut butter brownie, birthday cake batter and cookie dough. The truck also makes ice cream sandwiches with warm cookies to melt the scoops of ice cream stuffed inside. Its Instagram bio is always updated for which location is their next stop. 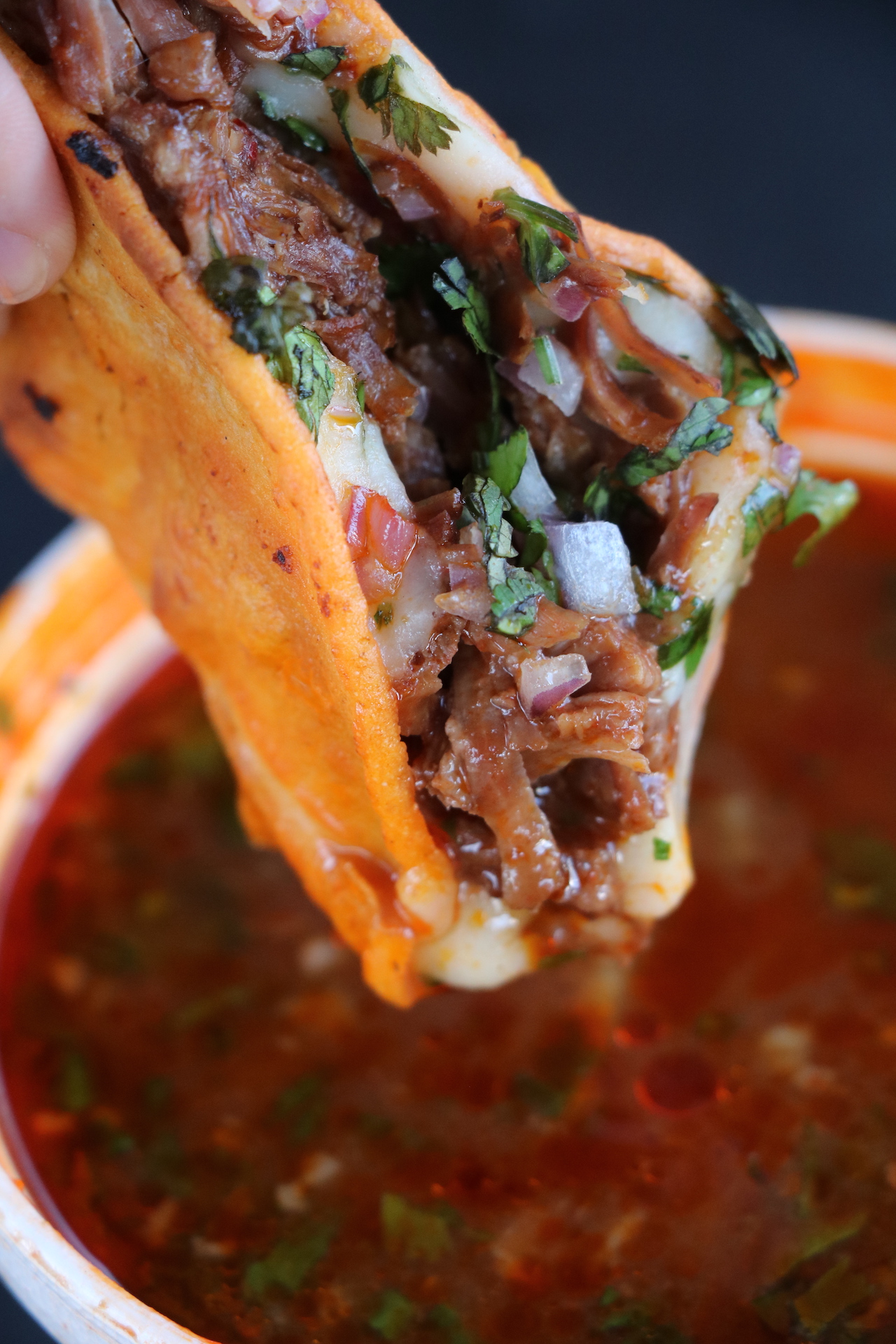 Birria tacos with a side of consommé. Photo by Haley Paez.

The Lowdown: 2021 has been the year of the birria, as viral videos have become obsessed with capturing people dunking tacos into the luxurious consommé. Denver was no exception and it has led to the popularity of Kike’s Red Tacos – the red alluding to the radiant consommé dipped tortillas that hold in the shredded birria beef. There are tacos, but the majority of the menu has different ways to enjoy birria – beef that has been stewing for ages until it cannot hold itself together anymore. For a real take on fusion, their final item is a birria ramen. They tend to keep one location – 3701 W 44th Avenue – but their Instagram can confirm their schedule. 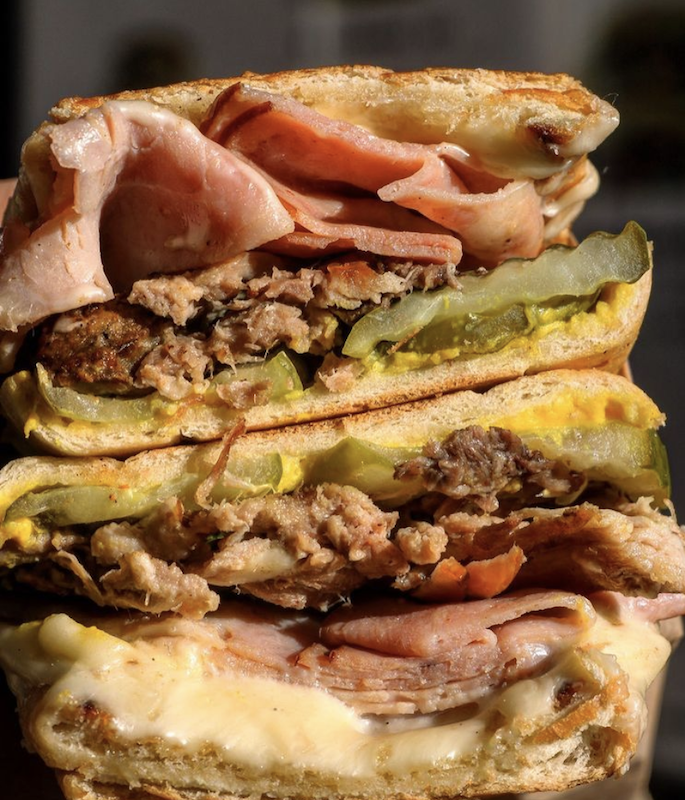 Cubano sandwich from Bodega–one of the three concepts at Food Halla. Photo by Haley Paez.

The Lowdown: With rather limited space, it makes making dishes difficult for most. Food Halla goes a step further and has decided to bring in three concepts onto one truck. Among this mobile food truck – each concept is vastly different but all thoughtfully curated. The Bodega brings Cuban flavors with the star being their slow-roasted pork. It finds its way onto plantain nachos, lechón sandwiches and of course the Cuban itself. Spud Nation builds on a loaded baked potato with some having bits of bacon, while others drown in cheese. The most recent addition has been Seoul Brother – providing a new spot for KFC that isn’t from Kentucky. 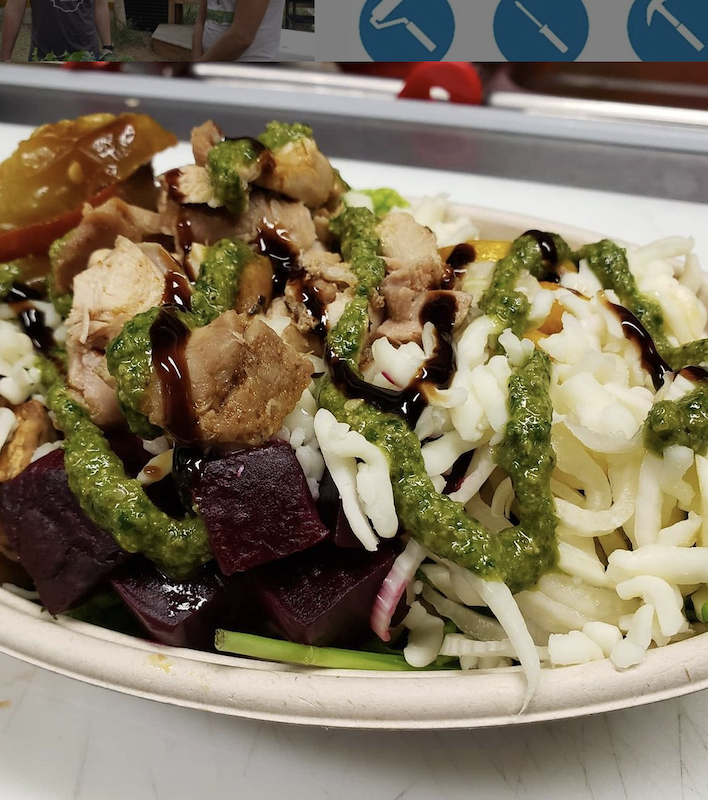 A customizable bowl from SAME Cafe. Photo by SAME Cafe.

The Lowdown: As everyone is trying to feel good after the hard times faced –Same knows this and works under a business model of everyone being able to secure some food. This truck is “pay as you can” and people have been generous enough to tip in the amount of it covering another person as well.  Farm-fresh, organic ingredients inspire each dish. Much of the menu features produce to liven up the soups and salad for customers – ensuring that their meal is full of health benefits as well. The menu is constantly changing to encourage more people to be able to see variety in their plates. They can be found at the local pay as you can farmer’s market at the Lost City Farmer’s Market. 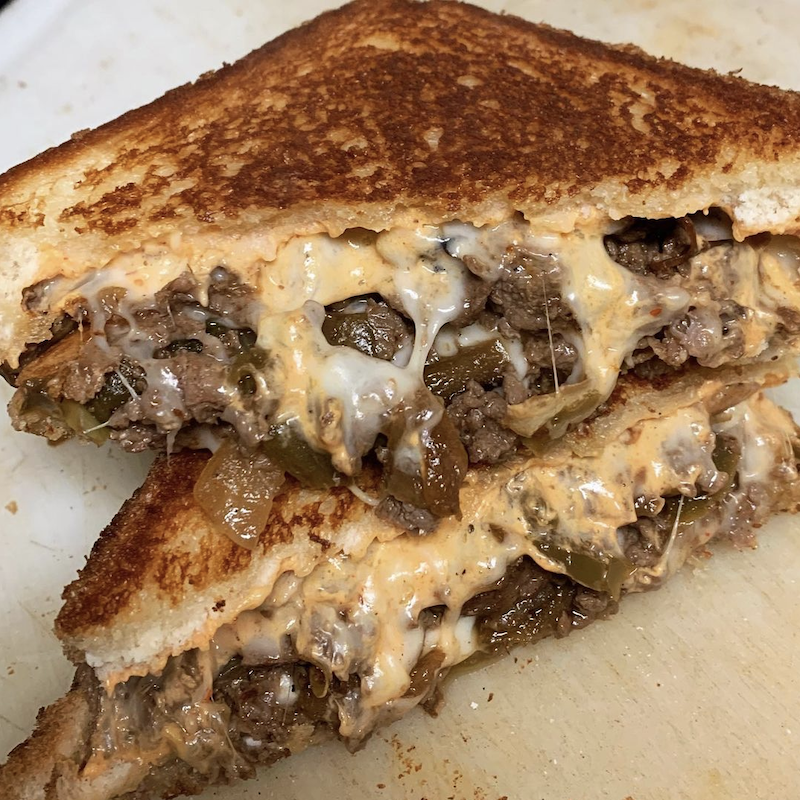 The Lowdown: Everyone should know how to make a simple recipe like a grilled cheese. However, these cheese whizzes don’t stop at American cheese on pre-sliced white bread. Each fully stocked sandwich holds multiple kinds of cheese and an array of toppings. Inside their Italian inspiration you’ll find sausage, mozzarella and provolone for what feels like a meatball sandwich mixed with a sausage pizza. The pesto is a more complex BLT – the addition of green pesto replaces the lettuce. Their thick-cut Texas toast is the most capable to hold up to the fillings inside, but country white, gluten-free and wheat are also options. The truck’s Instagram and truckster.com page has a detailed rundown of their week

Roll it Up Sushi 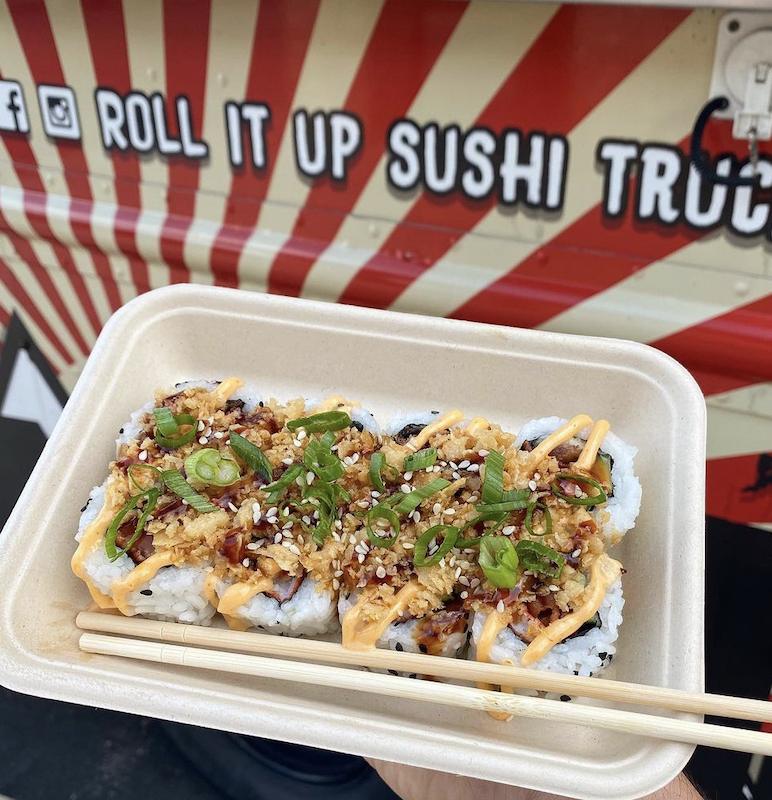 The Lowdown: This truck affirms that trucks sell more than just quick, casual, comfort food. Sushi no longer needs a bar for service, instead, they dish it out when the wheels stop turning. They prioritize making inventive rolls. The Cali roll has cream cheese but the topping is where they go all-in with green onions, mayo and teriyaki – which finds a feature on most of their rolls. Also you’ll find a surprise addition in their tempura shrimp with crunchy pieces of salty bacon.  Their website keeps fans up to date on their current stops. 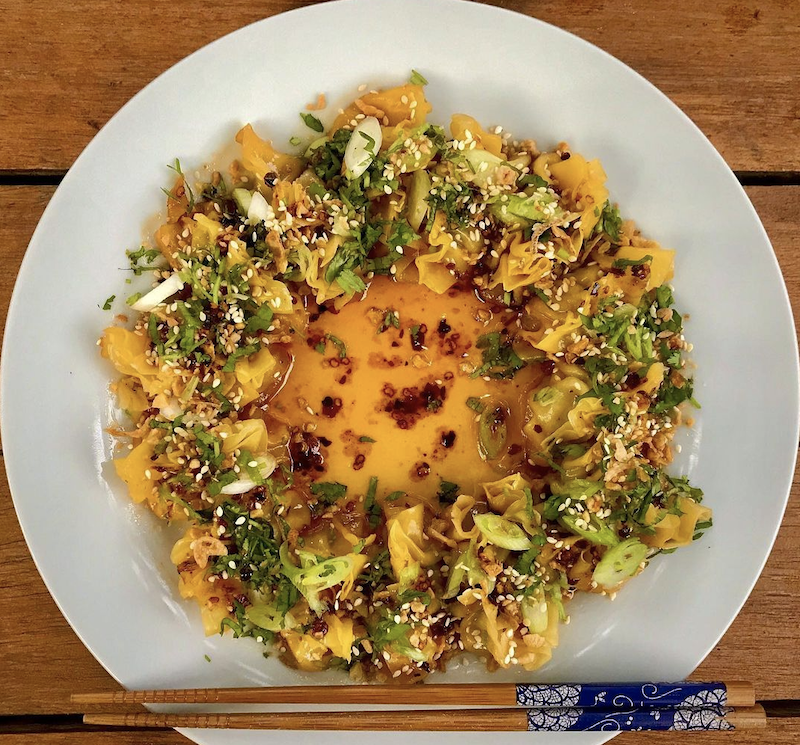 The Lowdown: Not many trucks can say they sell out before even reaching their stop. Yuan Wonton opens their ordering site the day before to avoid lines for COVID safety. The site sells out of inventory within minutes. Her collection of dumplings, wontons and noodles radiate a mix of spice, aromatics and texture that makes each one addictive. The chili wontons are always on the menu. They hold a mix of pork and shrimp – ready to soak up the chili oil it sits in. Fan favorites include her XL xiao long bao soup dumplings where owner Penelope Wong went rogue and made one dumpling the equivalent of four with a healthy eruption of soup. The highlight section of Instagram gives a monthly schedule about her pop-ups. 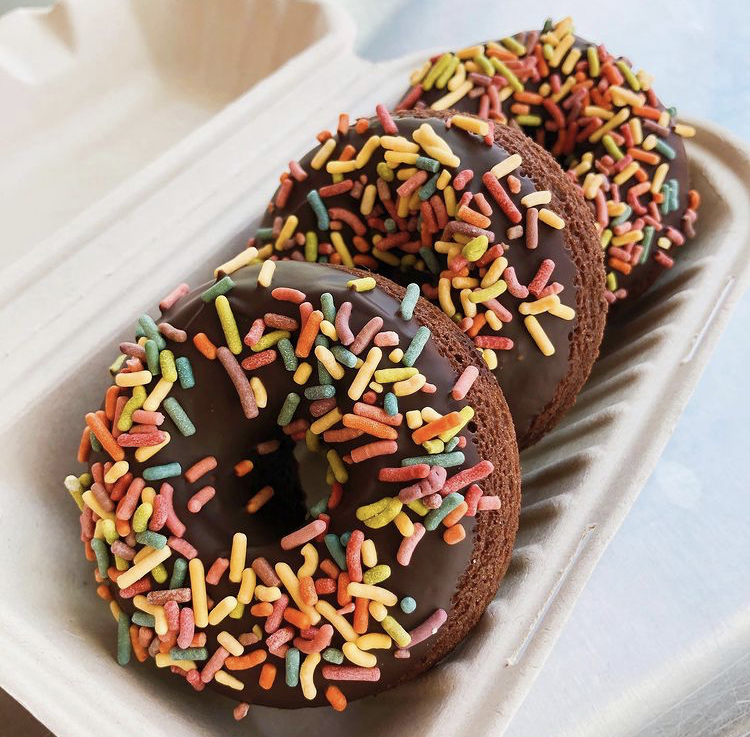 The Lowdown: Local produce is at the forefront of the menu, but this truck makes sure to have dishes that one might think contain all the meat, eggs and dairy in the world. Gyros are overflowing with fresh vegetables alongside strips of seitan to replace lamb and beef. Their cinnamon rolls rise just the same and have the needed final drizzle of the addictive icing. Chik’n and waffles tacos on their menu blend southern soul with Mexican flavor for a fun vegan twist on two flavors all eaters know and want. Their schedule and menu changes are often found on their Instagram page.