Protesters march during the July 3 and 4 protest. Photo courtesy of Lillian House

April 4 marked the biggest victory to date for local protesters facing an ongoing legal battle after they staged protests against the Aurora Police Department. These efforts included a protest on July 3 and 4, at which hundreds of individuals showed up to an Aurora police station to demand the firing of two officers involved in the death of Elijah McClain. In response to the events of that protest, the organizers were charged with multiple felonies and misdemeanors, charges that the leaders hold are baseless.

But this past Sunday, the Arapahoe County District Attorney’s Office moved to dismiss some of the primary charges against the organizers — including 16 felony charges and several misdemeanor charges that totaled up to 48 years in prison. However, not all of the charges have been dropped; in Arapahoe County, three of the organizers, Lillian House, Terrance Roberts and Joel Northam, still face more than a year of potential jail time. And in Adams County, the organizers and a fourth leader, Eliza Lucero, are battling additional charges that could result in almost 14 years of jail time.

Now, the protesters and their supporters are urging locals to join their efforts to get the remaining charges dropped. 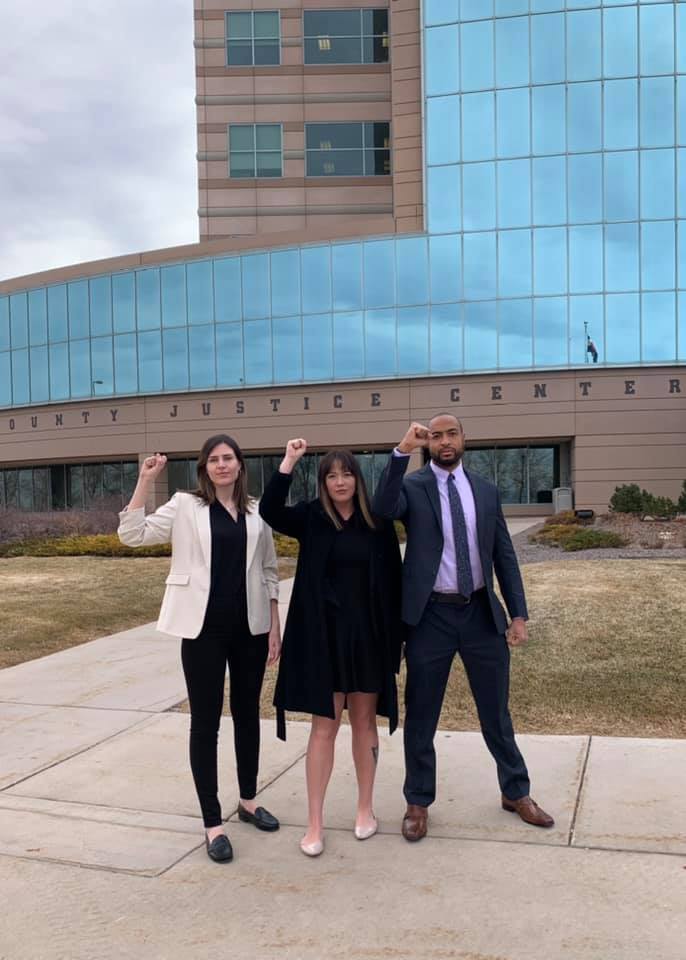 The charges are “really an assault on this community’s right to demand what is completely reasonable, which is safety and respect and basic forms of justice for someone who was brutally tortured and murdered,” House said. “There’s been no consequences.”

The charges against House and her fellow organizers were originally filed in September, two months after the protesters organized the July 3 protest. The event was one of several demanding justice for McClain. In a statement, the Adams County DA’s office alleged that during the protest, individuals prevented police officers from leaving the District One Police Station by creating barricades and securing doors with ropes, wires, boards and other items; that some protesters carried firearms and that protesters stated “no one would come in or out” until two of the officers involved in McClain’s death were fired. The protest lasted for about seven hours before the group was broken up.

In August 2019, McClain, a 23-year-old Aurora man, was walking near his home when a resident contacted the police department to say that he felt McClain was acting “weird,” as he was dancing and wearing a ski mask to keep warm. Three Aurora police officers approached and apprehended McClain, placing him in a chokehold twice — a hold banned by the department today, though at the time, it was allowed in situations only where officers feared for their lives. McClain began vomiting because of the force used by the officers, and paramedics administered ketamine shortly after their arrival at the scene. McClain went into cardiac arrest and died several days later. 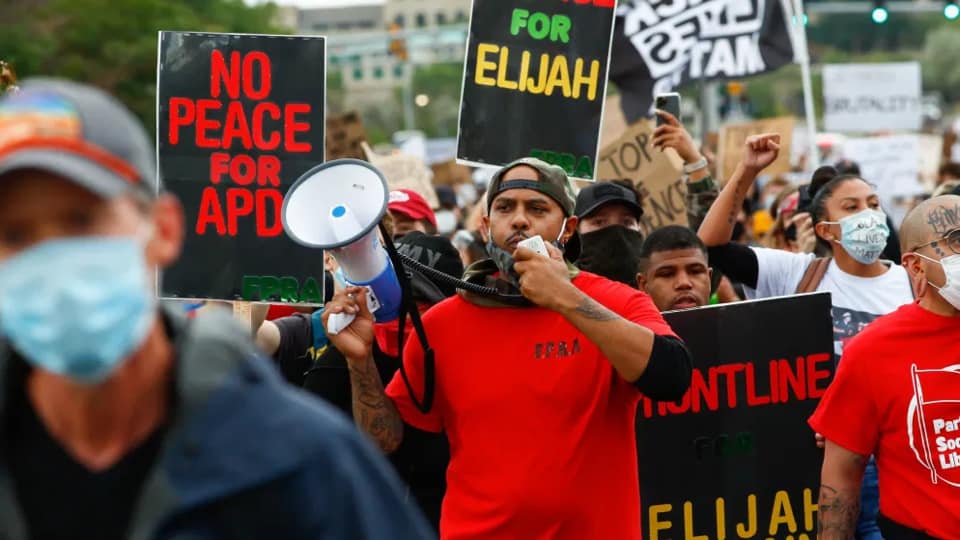 Terrance Roberts during one protest to demand justice for Elijah McClain. Photo courtesy of Lillian House.

Today, one of the officers involved in McClain’s death, Jason Rosenblatt, is no longer with the APD, having been fired after three other officers who weren’t involved in the case sent him a photograph mocking McClain’s death and Rosenblatt responded “haha.” The two others who apprehended McClain, officers Nathan Woodyard and Randy Roedema, remain with the department.

A February 22 independent investigation found the officers’ extensive restraint of and use of force upon McClain was unjustified. It recommended widespread review and reform in the department to prevent future tragedies. That investigation was commissioned by the Aurora city council on July 20.

“That was 11 months after Elijah was killed,” House pointed out. “The Aurora City Council hadn’t done anything for 11 months. What was the thing that changed their minds? It was that there was a protest June 27, July 3, July 12, there was another one planned July 25. The people here are the ones who have made the difference in keeping Elijah’s case from being buried, and that’s really what we have to defend here.”

House, Lucero and Northam originally faced with yet another charge, the attempted kidnapping of the 18 police officers inside the District 1 station. But in another victory for the protesters, that charge was thrown out by a judge on March 25, who said there was no evidence that the three specific organizers had acted violently.

“It’s very validating because we’ve been saying the whole time this was a peaceful protest,” House said. “The whole case is retaliatory. It is an attempt to punish the leaders of this movement that brought to light a really shameful case for the Aurora police and also a cover-up by the city.” 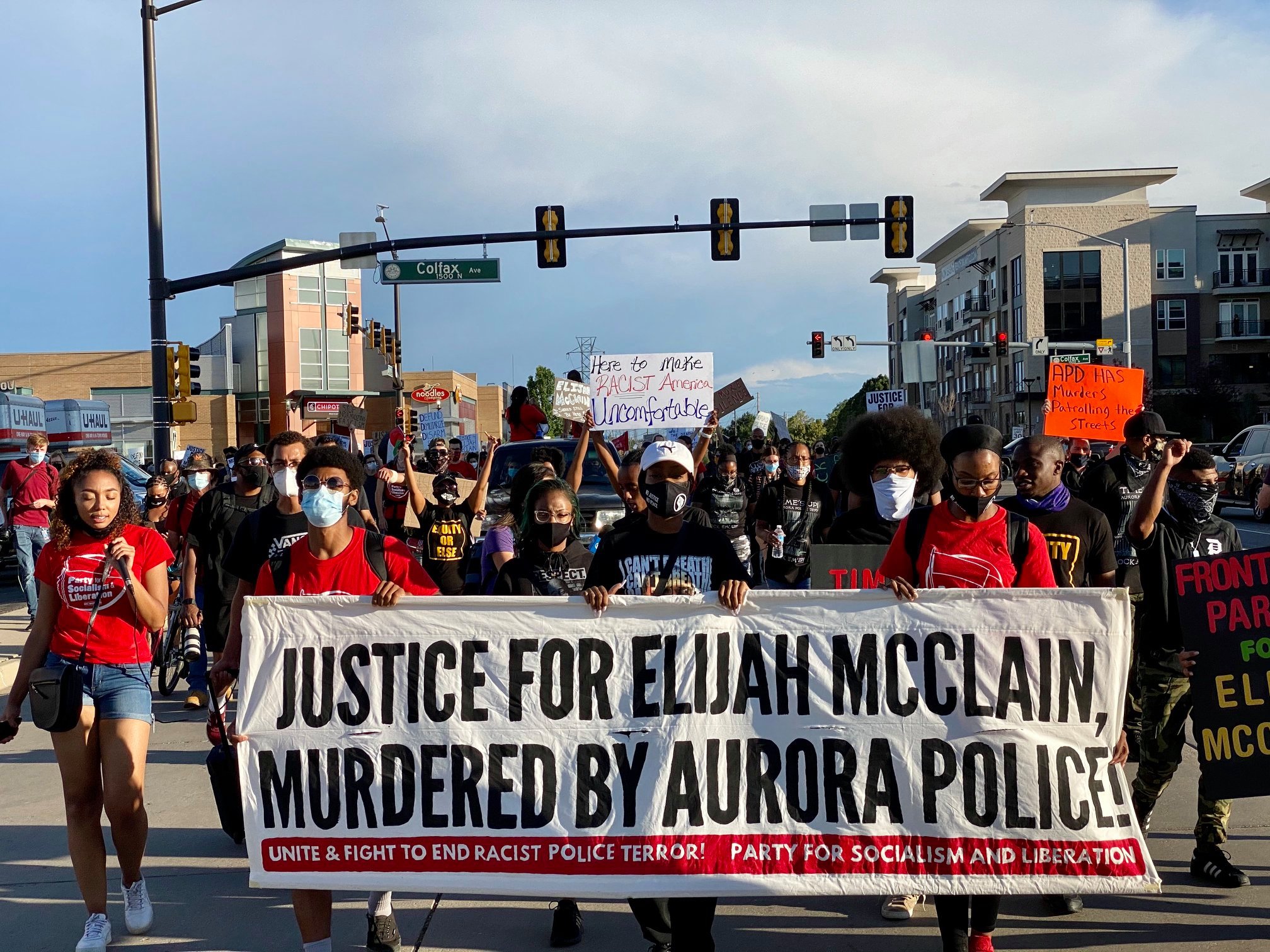 Protesters march during the July 3 and 4 protest. Photo courtesy of Lillian House

In the meantime, the Arapahoe District Attorney’s Office has issued a statement in regards to the charges that have been dropped by the DA and the remaining charges against the leaders.

The dropping of the charges was “requested after a careful review of the investigation and the available evidence. Prosecutors must reasonably believe that charges are supported by probable cause, that admissible evidence will be sufficient to support conviction beyond a reasonable doubt, and that the decision to charge is in the interest of justice,” the statement said. As for the remaining charges, “a defendant is presumed innocent unless proven guilty. As these remain open cases, this office will have no comment on them outside the courtroom at this time.”

Assuming the charges are not dropped, House said the protesters will go to their arraignments this spring, after which future court dates will be set. House added that those interested in supporting the leaders as they fight the charges by contacting the district attorneys, signing the petition to get the charges dropped or donating to the defense fund can do so at denverdefense.org. They can also follow the cause on social media at @justiceindenver.

“If they don’t drop the charges, we honestly look forward to challenging this ridiculous case in court,” House said. “But even if they don’t succeed, the message has been sent that even if you’re peaceful, this is what can happen to you if you stand up to the police. That’s outrageous. This community deserves the right to say you don’t get to murder innocent people without consequence.”