When Old Major closed its doors as former owner Justin Brunson went all in at his meat processing venture — River Bear Meats — it left a void that not many chefs could fill. Luckily Amos Watts — Brunson’s friend and colleague — was able to step in and make the space his own. Watts opened The Fifth String in August, bringing an eclectic mix of vegetable-forward dishes and locally-sourced meats together to create a menu that breathes new life into the space.

Watts has made his mark in many of Denver’s favorite restaurants including Corrida, Jax, Acorn and Old Major but The Fifth String is his first venture as the sole owner. Brunson decided it was time to close Old Major for good after shuttering due to COVID-19 restrictions and succeeding at River Bear Meats. Watts quickly jumped on the opportunity and opened The Fifth String on August 15. “It happened so fast, it was almost turnkey,” said Watts. 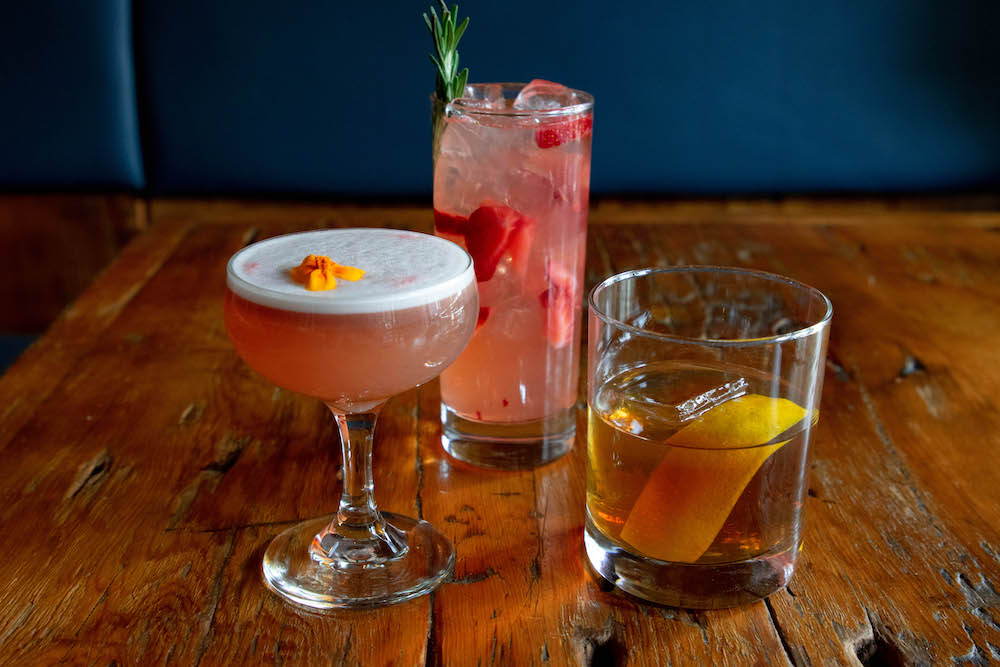 Much of the same decor remains inside the new space but the rooms are being utilized in different ways, “The charcuterie room is now the wine room,” said Watts of the large selection of wine in the restaurant. “I like a lot of natural wines. I like weird wines. I also like inexpensive wines,” he explained. You’ll find wines by the glass ranging from $9 to $16 — with varietals spanning the classics like Chardonnay and Cabernet Sauvignon as well as more unique options like Carignon and Fiano di Avellino that were selected by General Manager and Beverage Director Gene Fereda.

The menu at The Fifth String includes family-style dishes like a whole roasted chicken ($72), bone in short ribs ($89), Italian lamb and pork sausage ($54) and a 20-ounce prime striploin ($102) that all serve three to four people and are beautifully plated. Smaller plates include fresh seafood dishes like ahi tuna crudo ($18) and New England sea scallops ($36) while vegetable-forward appetizers like heirloom tomatoes ($16), beets ($14), and summer squash and eggplant ($14) include vegetables picked from Watts’ own garden. “During COVID we kept expanding our garden and now it’s our whole backyard,” said Watts. “It’s really fun to pick vegetables and serve them that night.”

The Fifth String also boasts house-made pasta dishes like gnocchi ($18) that has the perfect crisp on the outside and a pillow-soft center. The pappardelle ($23) is served as a single noodle with caramelized squash and a giant parmesan crisp that delightfully melds the al dente pasta with crunchy cheese for a bold flavor combination. Braised rabbit and ricotta agnolotti ($28) is the way to go if you’re looking for a unique dish that combines fresh vegetables like cherry tomatoes, corn and arugula with rich rabbit and ricotta enveloped in tender pasta.

Opening a restaurant during a pandemic is no easy feat, but according to Watts the only way to go is up. “We’re lucky to have a really good team. We’re asking a little more of them than we typically would, but we are asking more of ourselves too,” said Watts. Watts has experience working with many of the members of the kitchen staff at other restaurants and explained that they speak the same language when it comes to cooking. “It’s nice to be able to have a right hand man to help me become more creative. I can say, ‘Remember that crab dish we did at Jax? Let’s do that but change it up and add this,’” Watts said of working with Chef de Cuisine Marcos Mendez.

The cohesiveness and experience of the team at The Fifth String is actually the reason for the name of the restaurant itself. Watts plays the banjo and explained that the fifth string of a banjo is the tonal center that you typically don’t fret. “It’s always the same note. That represents our passion, our experience that we don’t touch and we play around with all the rest,” he said.

While dining restrictions remain in place throughout Denver, The Fifth String is optimistic for the future. Watts already expanded service to seven days a week and hopes to add brunch once restrictions are lifted. “The only way to go is up,” he said.