Several months ago you might have squeezed your way into Outer Range Brewing’s taproom after a day of skiing to drink a beer or two before making the journey back to the city. Prior to COVID-19, the brewery was able to pack in guests on most weekends but even without current restrictions, owners Emily and Lee Cleghorn knew they needed more space. About two years after opening the brewery in 2016, the husband and wife duo decided to expand. “We were busting at the seams,” said Emily.

When the Rio Grande — located next door to Outer Range — closed its doors last year Emily and Lee knew they wanted to purchase the extra square footage in order to grow Outer Range’s taproom, production and operations.

“We were very fortunate when this space became available. We were looking for new spaces to expand and didn’t want to have to move locations completely,” Lee added.

After many months of renovations — then dealing with COVID-19 — Outer Range’s new addition is now open with a restaurant, coffee shop and rooftop patio.

The old space will still be used to produce and can beer and guests can walk over to see the brewers in action and — when it’s safe — enjoy a beer at the community table. “One of the things I liked about seating people near the production area was that it felt like they were in a brewery,” stated Emily. Now Outer Range will be able to double its production capacity from 2,500 to 5,000 barrels per year.

Outer Range’s origins come from Emily and Lee’s passion for brewing beer and for the serenity of the outdoors — which is reflected in the creative names of brews like In the Steep, Infinite Sidetracks and Change of Scenery as well as in the tagline “Leave the Life Below.” Lee began homebrewing beer in college after moving to the US from Belgium.

“When I was 16 years old I was going to bars in downtown Brussels and drinking great beer. Then I came to the US for college and couldn’t adjust to the cheap beer so I started homebrewing with my roommate and throwing huge homebrew parties,” he said. The couple even met through homebrewing when both were serving in the Army in Colorado Springs. Several years later — after they had their daughter — Lee’s third deployment was especially tough and they decided they would move to New York together to simultaneously get their MBAs — all while raising a two-year-old daughter. “It was insane,” said Emily.

While in New York they came up with a business plan and knew they wanted to move back to Colorado to open a brewery in the mountains. Outer Range began with a few Belgian ales and grew from there. “Belgian-style beers were the natural culmination of that path,” stated Lee, “we started doing IPAs and the demand was there so we kept it up.” Emily and Lee knew that if they remained focused on a few styles of beer that they would make a name for themselves in that market. “We knew we would branch out to other styles but wanted to start out hyper-focused,” said Lee.

Now Outer Range works with other breweries across the country on collaborations about one to two times per month which allows Lee to experiment with different flavors and styles. Part of the expansion even includes multiple temperature-controlled taps so that each beer is served at the exact temperature it should be enjoyed at — 38 degrees for lagers and Kolsches, 45 degrees for IPAs and 55 degrees for Belgian ales. “The idea is that when someone gets the beer in their hand it’s at the perfect temperature for that style,” said Lee.

The brewery is also excited to be the eighth brewery in the country to start recapturing and using the CO2 emitted from producing beer through new technology from Earthly Labs. Earthly Labs offers brewers a plug-and-play solution to recover waste CO2 from fermentation and brite tanks, purify it to meet beverage-grade standards and reuse it to make better beer. By utilizing this technology Outer Range will be able to reduce carbon emissions by 50% — the equivalent of planting 1,500 trees — and reduce the costs associated with purchasing CO2 from third parties. “It’s always been cost-prohibitive for small breweries to do this until now,” stated Emily.

In addition to the expanded taproom and production space, Outer Range is now home to Bird Craft — a new fast-casual concept serving up “Thai-ish” style fried chicken from chef Chris Schmidt. Schmidt comes from the fine dining industry and has worked at notable restaurants including Thomas Keller’s Per Se in New York and Sweet Basil in Vail. The chef left the fine dining scene several years ago to open The Craftsman — an artisan sandwich shop in Edwards.

“I felt as I got older I wanted to do really good food with big flavors. I wanted to get away from the pretentiousness of fine dining and get back into casual dining,” said Schmidt. Emily and Lee asked Schmidt — a long-time friend and fellow brewer — to come up with the restaurant for their new space and Schmidt followed his own taste buds to design Bird Craft. Bird Craft introduces new, bold flavors to the typical brewery menu through items like a Thai-ish fried chicken sandwich, pigtail fried rice, Ahi poke “tots,” green papaya salad and several Thai-inspired sauces. It also offers whole birds, half birds and quarter birds served with jasmine rice, house pickles, fresh herbs and your choice of sauce. Schmidt and Lee worked together to create a rice lager — aptly titled Pluck Pluck Pluck — that pairs perfectly with any of Bird Craft’s offerings.

When Emily and Lee acquired the new space they wanted to be able to share it with guests throughout the day — not just in the afternoons and evenings — and that’s where Mountain Dweller coffee comes in. Mountain Dweller offers craft coffee and espresso drinks, house-made granola, yogurt parfaits, loaves of bread, cookies, fruit hand pies and Belgian-style Liege waffles for guests to enjoy throughout the day. The new space allows for guests to order coffee and pastries to-go or to take upstairs to enjoy on the couches and patio overlooking Frisco’s Peak One. “We have an opportunity to use this space at any time of day now so we want to give that to the community,” stated Emily. 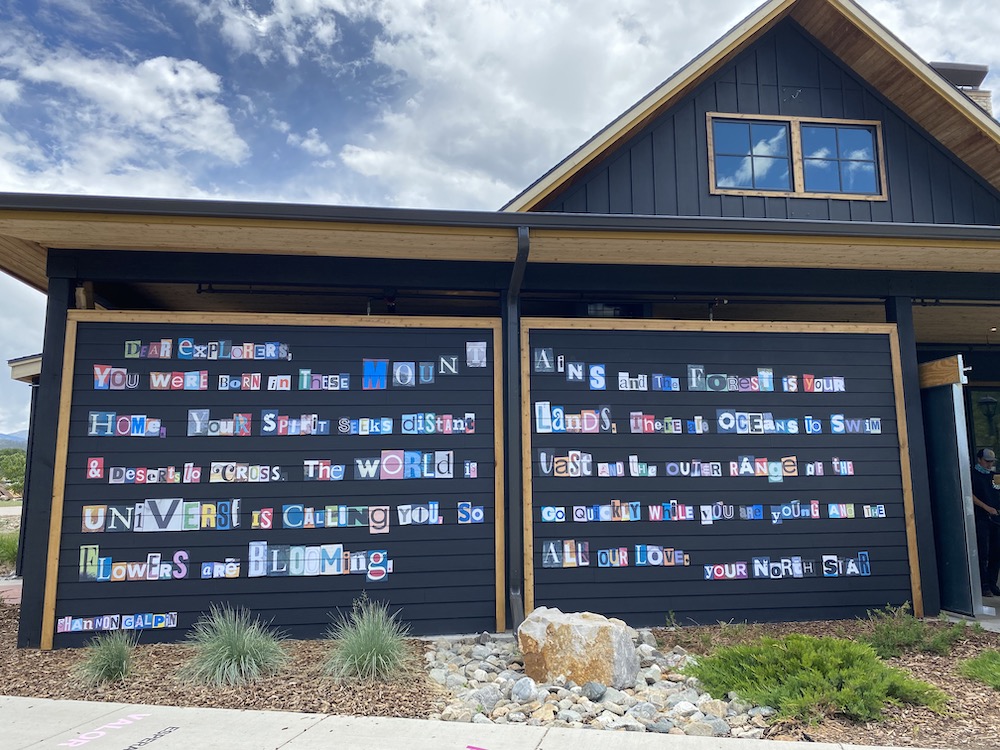 Whether it’s an iced coffee on your way up to the mountains for the weekend or a cold beer and a fried chicken sandwich after a long hike you can now enjoy Outer Range’s new space at almost any time of day. Now that you can get your coffee, meals and a beer all at one place there might not be a reason to leave after the weekend.