Last year, the Daniels and Fisher Tower on 16th Street Mall was set to be the site of a permanent art installation. Titled Night Lights, the project uses projection mapping to display artwork on the side of the tower. Directed by David Moke and in collaboration with the Denver Theatre District and Downtown Denver Partnership — the project has been a major Denver attraction and has been used as a platform for Denver’s art scene. The content rotates on a monthly basis — and this month features work amplifying local Black voices.

One of the artists featured this July is Denver-based photographer Narkita Gold. Gold has been at the forefront of Denver’s art scene recently with her portrait series titled “Black in Denver.” The series attempts to break stereotypes surrounding the Black community and instead focus on the stories and uniqueness of Black individuals. Gold’s photographs not only demonstrate individuality — but also interdependence among Denver’s black community. Each portrait features a colorful background — which sometimes repeats and connects with one another intentionally.

Along with the project by Narkita Gold — Night Lights is set to feature a project titled “Black Lives Matter.” Created by students from the Spatial Video Class at the University of Denver — this piece is set to raise awareness of Black Americans who have been killed by police. The project features a list of some of those Black Americans who have been killed since 2014.

Among these, you can also find a project titled “Anti-Gravity” created by Rainbow Militia. Rainbow Militia is a women-owned and Denver-based aerial and circus entertainment company. The video project features artists Amber Blais, Elizabeth Smith and Staza Stone. The piece is meant to be a reflection of the ways in which these artists navigate through issues such as depression and body dysmorphia. The artists hope the project will raise awareness towards Denver’s circus community — as well as demonstrate the strength and resilience that resides in each one of us. 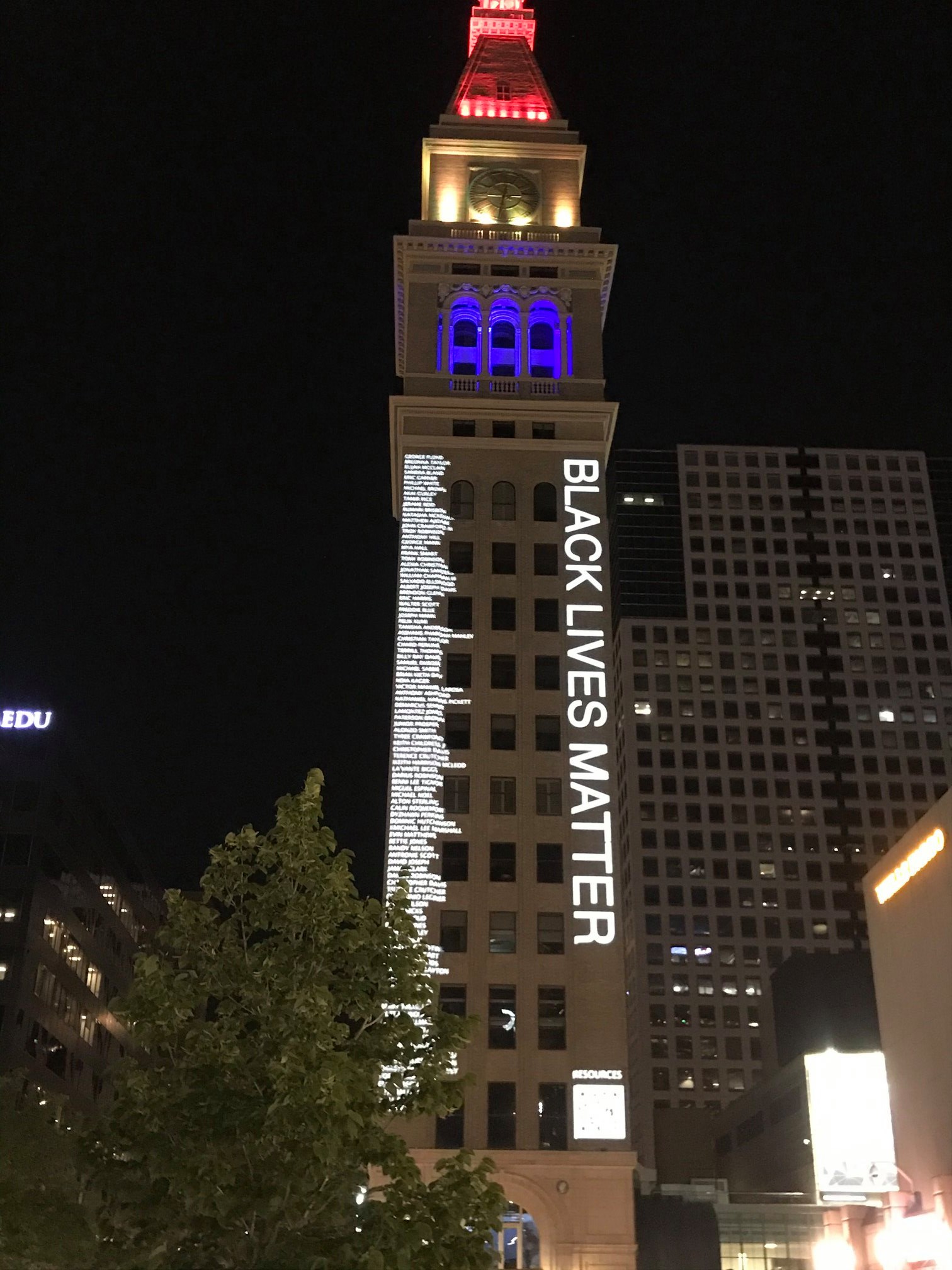 “Black Lives Matter” by Students of the Spatial Video Class at the University of Denver. Photo Courtesy of Night Lights Denver on Facebook

Next, you can find “Votive // Defixio” by artists Michael Stone and Christian Barreto Salgado. This project highlights gods of the past in a current digital platform. The artists describe these old gods as performing a cleanse and dispersing a curse from today’s world. They hope that their project on the tower will be a homage to ancient ways.

The last piece on the tower this month is “Watercolor” by artist David Fodel. Fodel’s artist statement describes the project as a “meditation on the visible and invisible processes that ebb and flow throughout our lives.” Fodel’s entrancing digital art has been projected on a tower before — at the International Commerce Centre in Hong Kong. Now, Denver residents can view Fodel’s colorful digital work right on 16th Street Mall.

All of these pieces will be on rotation throughout July. If you would like to see them for yourself — Night Lights will run Tuesday through Sunday from 9 p.m. to 11 p.m. The Daniels and Fisher Tower is located at 1601 Arapahoe Street. Make sure to catch a glimpse before the projections switch out next month.