A Global Art Battle is Popping Up in Denver

Art isn’t usually a competitive activity. Not at least, in the sense of other competitions like sports and video games. But since 2001, one New York City-based organization has fostered a creative tournament worldwide where artists paint in live-time, in front of an audience in hopes of winning the championship title. Appropriately named Art Battle, this event now happens in more than 50 cities all over the globe and starting on January 29, it’s going to occur regularly in Denver.

Sarah Jager is the producer of the new Denver Art Battle and gained that post simply by reaching out to the founders of the original one. “I used to live in Los Angeles and loved going to the Art Battle hosted there. It’s mind-blowing to watch the creative process in real-time,” she commented. Audience members not only watch each artist finish a unique piece of art, but they also get to vote on their favorite. “It was also my favorite place to purchase local art,” Jager added. 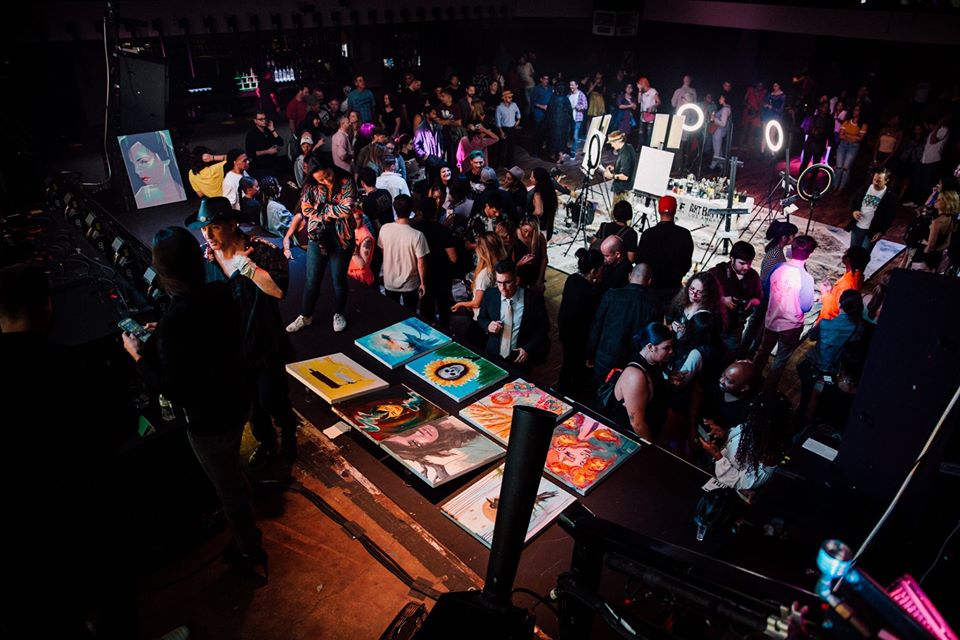 After moving to Denver last year, Jager was surprised to find out that Denver didn’t host one already. When she reached out to the founders, “they expressed that they’ve always thought Denver would be a great place to have their national championships, being that its art scene has exploded over the years,” she explained. Although this year might not bring the championships to the Mile High City, Jager’s motivation to bring Art Battle here has come to fruition. After the first one, on Wednesday, January 29, it will happen every other month.

“Denver culture cultivates an entrepreneurial and collaborative spirit. I’ve met so many local artists that are either freelance or started their own small business that focuses on their diverse talents,” said Jager. Art Battle seemed like a natural fit for a community that already thrived on supporting emerging artists. In her short time in Denver, Jager made the rounds during First Friday art walks and other art events in order to network and scope out local talent. “It didn’t take long to gain traction,” she noted.

Everyone who participates must apply, but Jager ultimately has the final curatorial say in who participates in the Denver one based on applications. The inaugural Denver Art Battle will feature The Vamp DeVille, Jwalk143, Shelby McIntosh, Whiskey Tango, Erin Rosch, Lee Arroyo, Cassandra Babtkis, AJ Davis, Nina Stewart, Jesse Bones, Jana Hope and Protoguy as the competing artists.

Each contestant is given a set of acrylic paints and a canvas, but it’s up to the artist what medium they want to work in and they’re allowed to bring their own materials. The styles range drastically, from graphic to illustrative to graffiti to more unusual methods, like finger painting. The same format for the tournament exists today as it did in the beginning — three 20-minute rounds with 12 artists.

Competitive art might sound counterintuitive to building community, but the founders of Art Battle — Sean Bono, Simon Plashkes and Chris Pemberton — started it as a response to unhealthy competition in the art world. The idea of “gatekeeping” — or certain groups controlling access to the upper echelons of the artistic community — frustrated not only them but a large group of creative people. Healthy competition allowed them to use some of their pent-up frustrations while showing what they could do to interested audiences. As the popularity of Art Battle grew, the visibility of the participants and their creations spread all over the world. In the nearly two decades since, Art Battle has collaborated with MTV, the Metropolitan Museum of Art and more.

In many ways, as Jager felt, it’s really surprising that Denver doesn’t already host a regular Art Battle. The spirit of the Denver art community hasn’t felt the full brunt of the competition that places like NYC and LA experience, so perhaps the need for blowing off the steam has been less urgent here. Regardless, the arrival of the tournament comes at a time when audiences are craving art experiences that are more exciting than simply looking at a canvas hanging on a wall. Plus, the winners of the Denver Art Battle this year will have a chance to compete in regional and national competitions, and finally the world championship in Tokyo. “It’d be pretty cool if I got to send a person to Tokyo to represent the Mile High City,” Jager admitted.

All photography courtesy of Art Battle