Well, well, well here we are again, at the turn of the new year. As usual, there really is no limit to the choose your own adventure of how to spend New Year’s Eve, and this year boasts an especially local lineup. We have scoured the billings to find the top choices for you to kick off your fresh decade with the right tunes.

The night of December 31 offers experiences all over the Denver, Boulder and Fort Collins areas, so take a look at the list below and choose one or seven of the concerts to jump into 2020 with. Find your sound and location and thank us later.

The Lowdown: Umphrey’s McGee makes their way to Colorado several times a year, but every other trip around the sun includes several nights at The Fillmore Auditorium for New Year’s Eve. This year, they are bringing a slew of extras along with them for their four-night run. They boast opening acts Pimps of Joytime on December 27, Cycles on December 28 and the Kyle Hollingsworth Band on December 30, as well as special guests Mad Dog’s Filthy Little Secrets for the December 31 performance. The residency is sure to excite any fans of the jam band community, and Umphrey’s knows how to make each performance count.

The Lowdown: If the desire to fuse a local legend with a brand new concert venue hits this coming Tuesday,  look no further than Leftover Salmon at Mission Ballroom. Few bands are able to create a fanbase so loyal they are followed for three decades, but Leftover Salmon is not like many bands. Formed in Nederland in 1989, the bluegrass/rock/cajun fusion group actually got their start together at a New Year’s show in Crested Butte — which makes them the most “Colorado” choice on this list. Karl Denson’s Tiny Universe and Lindsay Lou are the supporting acts on the bill to make the evening a full spectacle of talent.

The Lowdown: Let’s keep it local but break away from the jam bands for a moment. Gasoline Lollipops have been a local favorite for nearly a decade, offering their country/punk marriage of sound to a community that had heard nothing like it prior. The Boulder performance features another Colorado band, The Lonesome Days, as an opening treat. 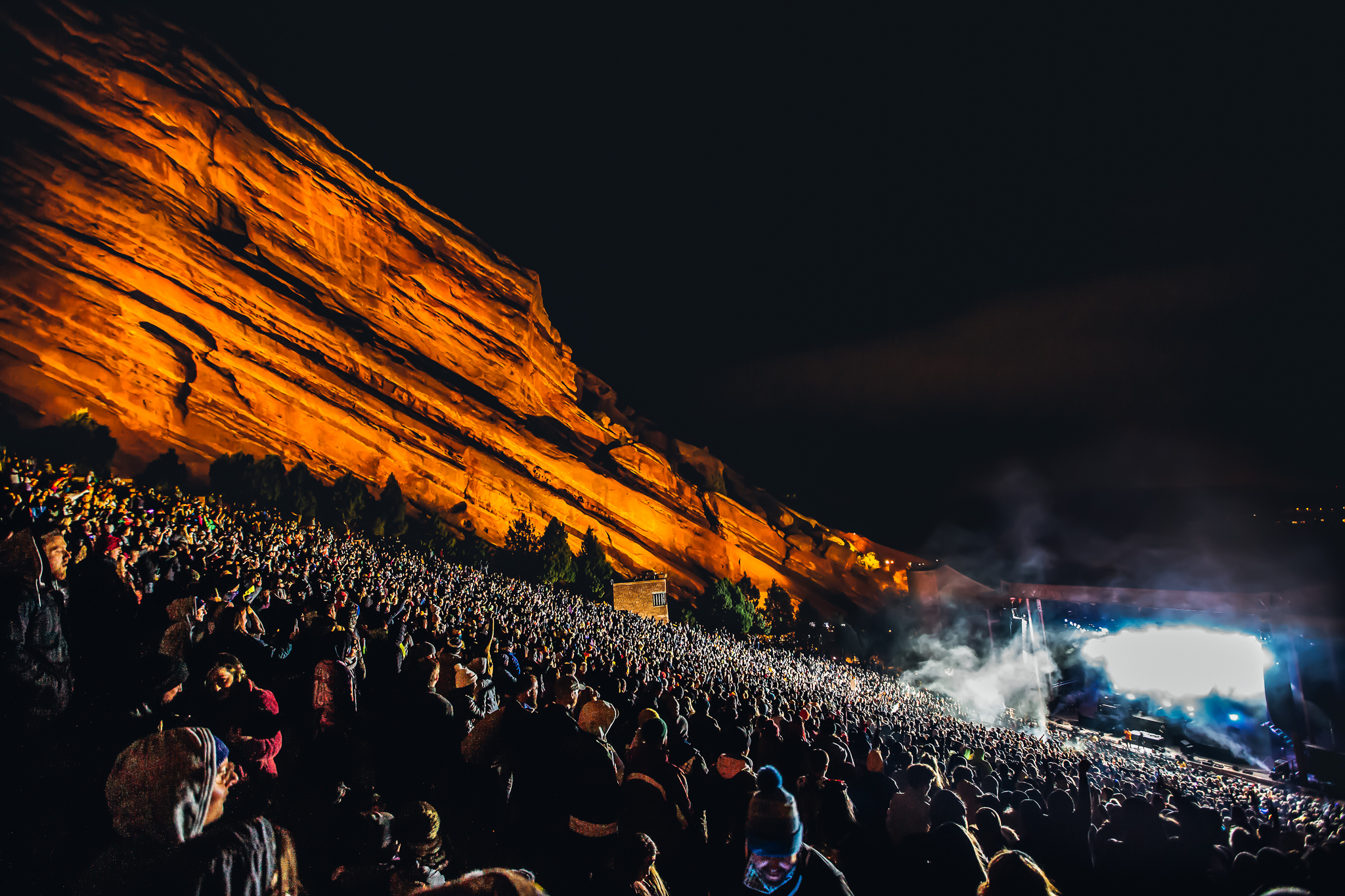 The Lowdown: Not sure who you are craving to dance to — as long as it is in the most iconic venue in the world while holding a free glass of champagne? Then head on up to Morrison for the Local New Year’s Bash at Red Rocks, where there will be a night of tunes as well as a prime rib buffet, laser light set and intimate tour of the backstage area.

The Lowdown: Returning Denver favorite — Boombox — will take the stage at The Ogden Theatre along with BackBeat Brass. Boombox has been creating the perfect mix of jam and electronic since 2004, though the lineup changed in January 2017. After Zion Rock Godchaux and Russ Randolph completed their final performance at their New Year’s event at Gothic Theatre, DJ Harry took over for Randolph and the legacy has continued. DYNOHUNTER and GoodSex will heat things up as opening acts.

The Lowdown: Though there is no way to prepare for a performance by Denver’s Itchy-O, we can try. First off, the 50-member group takes any preconceived notions of what makes a concert, flips it upside down and shakes it out to the beat of a professional drum corp. Along with their dedication to lights, outfits, dancing and the consistent unexpected surprise, Itchy-O will be sure to make a memorable start to the new year. With The Velveteers and a DJ set by Strange Powers as the opening numbers, the night is sure to be full-fledged with fun.

The Lowdown: Sure, this list is mostly local bands but who doesn’t want to rock into 2020 with a hometown hero? DeVotchKa started over 20 years ago and broke out into the mainstream in the mid-2000s. This will not be the first time celebrating the new year at The Bluebird, but it will probably be the most memorable. DeVotchKa, led by Nick Urata, will be joined with The Banshee Tree and Kiltro as their supporting acts.

The Lowdown: What comes after the rainbow? More Turkuaz! The nine-piece group from Brooklyn, NY has recently changed up their look by dismissing their iconic assigned colors of the spectrum and turning to a monochrome vibe for their current tour —”The Kuadachrome Tour” — which will involve  New Year’s Eve night at The Boulder Theater. The performance will be far from their first this year, as they have graced Colorado with shows last spring and summer. The funky musicians will come with Swatkins and The Positive Agenda, leaving it all on the dance floor.

The Lowdown: Trout Steak Revival made major waves by winning the Telluride Bluegrass Festival Band Competition in 2014. Since then they have became a staple in the Colorado bluegrass scene, which is no easy feat in the highly saturated genre. From winning an Emmy to hopping on the stage of many major festivals across the country, Trout Steak has proved themselves as one of the top options for breaking through into 2020. Wood Belly will open for the evening.

The Lowdown: Against Me! has been around forever, so their appearance at Summit Music Hall at this year-end will be the answer to every punk-alternative-aficionado from the 2000s. The band has made several significant changes over the years while remaining true to their original sound. Fronted by Laura Jane Grace, James Bowman, Andrew Seward and Atom Willard, Against Me! will be joined by supporting bands Sincere Engineer and Plasma Canvas to make a full night of punk enjoyment.

The Lowdown: Back to the hometown favorites are Augustus, a four-piece group from Boulder that has been dazzling their fanbase since 2013, earning them the spotlight at The Larimer Lounge on New Year’s Eve. The band had a heavy 2019 and is hoping the same for 2020, so don’t miss their first show of the new decade. They will be joined by Goodnight Freeman and Colors and Static.

The Lowdown: Peter Dougherty, otherwise known as Moon Boots will bring his funky good time to Club Vinyl along with J.Phlip, Durante and DJ Holograph. Moon Boots is known for his contributions to house in mixing soul, R&B, funk and more. His second album Bimini Road dropped this summer and is sure to be in rotation for the evening, so give it a spin before getting to the club.

The Lowdown: The Los Angeles trio of Glitch Mob — made up of Justin Boreta, Ed Ma and Joshua Mayer — are going to push the boundaries of production at Temple on New Year’s. The night is more than a concert and will consist of champagne theatrical performances and VIP services. If you do spring for the fancy upgrade, your night will include an open bar, food and a VIP lounge. The band, combined with Temple’s immersive environment, will be an experience like no other.

The Nuns of Brixton

The Lowdown: One of the most unique experiences on this list will have to The Nuns of Brixton at Lost Lake. The band hails from across the pond and boasts themselves as the only Clash cover band that matters. No other venue in Denver cozies up quite like Lost Lake, so grab your closest friend and get ready to scream. The show will feature Log and The Gurkah’s.

The Lowdown: Known as one of the largest New Year’s parties in the nation is Decadence, coming at Denver residents for two nights, the 30 and 31. New Year’s Eve night will consist of famed acts like REZZ, Louis The Child, San Holo, Slander, Steve Aoki and Zeds Dead. Decadence would be a difficult evening to top, so don’t sleep on getting tickets as they are sure to run thin the closer we get to the event.