Review – Nobody Hides When Wilco Comes Out to Play

Wilco played to a nearly sold-out Mission Ballroom on Tuesday, November 20. The six-piece band has embarked on a tour across North America following the release of their 11th studio album, Ode to Joy.

This newer record seemed rather more upbeat than previous records from the band. In a statement announcing the album, lead singer Jeff Tweedy said the album overall aims to be defiantly joyful in the face of global political and cultural upheaval. “This terrible stuff is happening, this deepening sense of creeping authoritarianism that weighs on everybody’s psyche on a daily basis, and you’re allowed to feel a lot of things at once. And one thing that is worth feeling, that is worth fighting for, is your freedom to still have joy even though things are going to shit.” Denver served as the fifth stop of the tour, where they delivered a comforting performance of nostalgia and feel-good jams to an eager audience.

Ode to Joy felt soft in comparison to their live performance. It felt like the album tried to maintain an almost-exasperated cheeriness, and the tour served the purpose of letting out their all-too-real frustration at the state of the world unrestrained. However, the set still carried the laid-back, chill charm of Wilco. Occasionally they would carry a song out to a distorted and noisy end but ultimately would find a way to reign the energy in. It’s almost as if Wilco dreamt of shedding their folkier stylistic leanings for a more grungy sound, but couldn’t let their fans down. 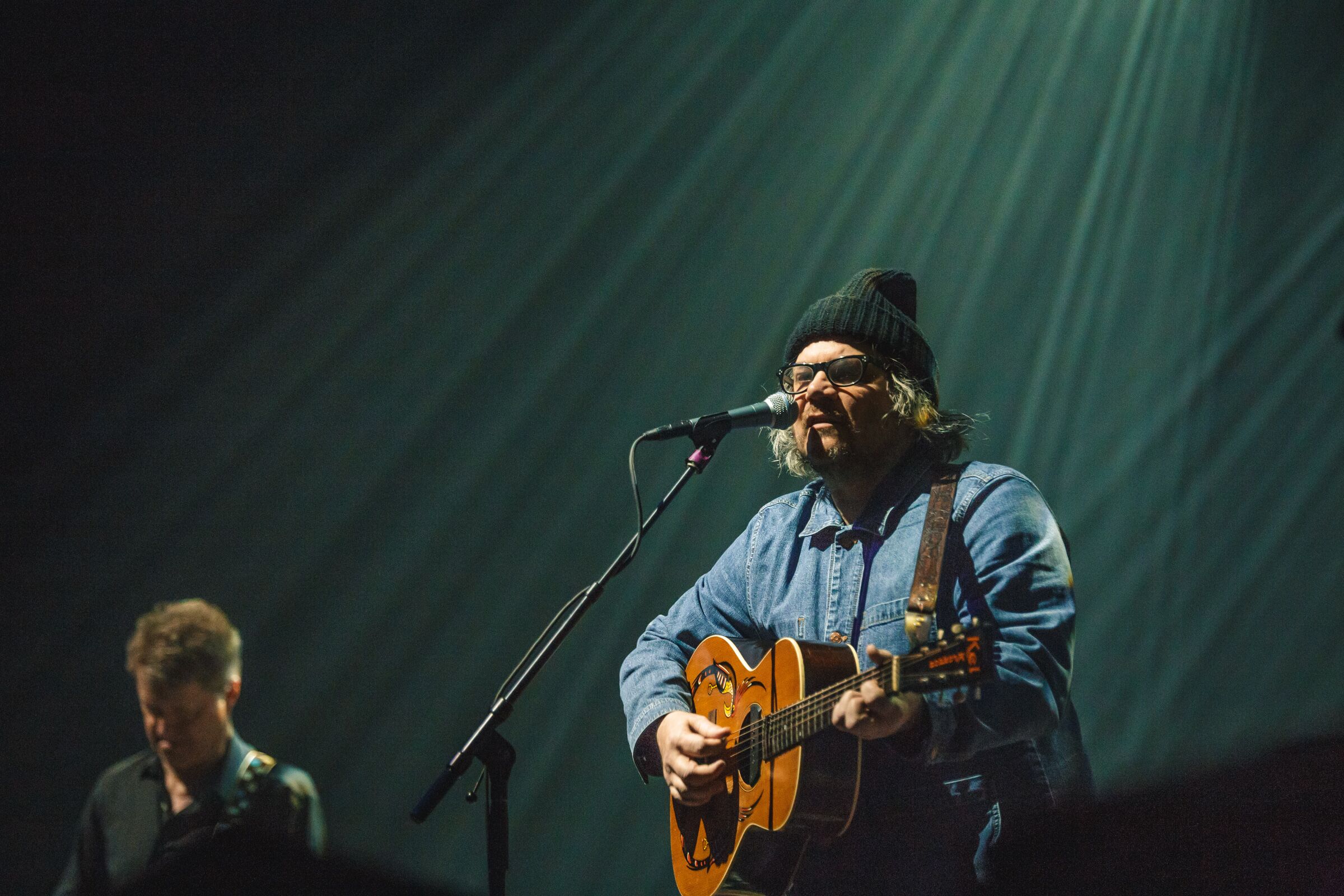 Wilco’s past as a country band can’t be ignored, especially when Tweedy himself sat behind the dobro and played the instrument for the song, “Jesus, Etc.” Behind him, organ notes shimmered, bass notes plunked and guitars morosely strummed as the song gently plodded on.

All six band members spread out on stage stayed fairly static throughout the show, playing animatedly but still with an aura of blasé and effortless cool as they played the earworm ditty, “Random Name Generator.” Swapping out guitars in standard tuning for custom-tuned instruments for songs like “Everyone Hides,” — arguably the best song on Ode to joy — hardly took up any time, the band clearly operating with seasoned synchronicity.

The band played an equal balance of songs from their newer albums like Star Wars and earlier works, including, “Box of Letters,” from their debut album. It was a welcome surprise that they didn’t just play songs from their most recently released album, as many touring bands are oft to do. Wilco kept the crowd engaged by playing their older hits as well, only sprinkling in a couple of newer songs. And considering their prolific discography, it comes as absolutely no surprise that they performed for nearly two and a half hours. 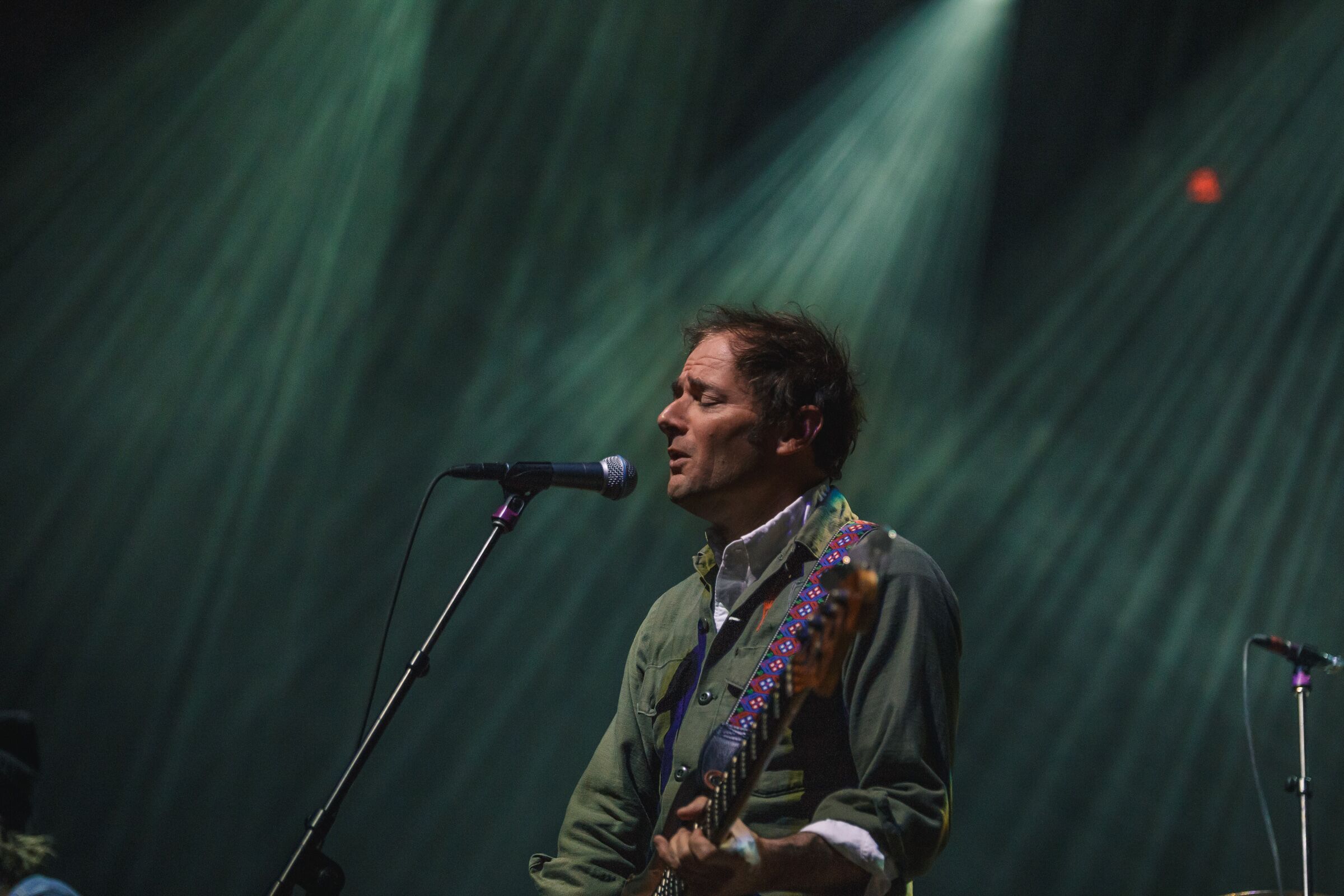 Wilco doesn’t have to rely on a dazzling fanfare of smoke and mirrors to draw a large turn out. For most of their performance, the band had minimal, monochromatic, cubist-style designs projected behind them. Occasionally, a silvery spotlight shined on the guitarist as he played a solo, such as the long embellishments in “Impossible Germany,” while the rest of the band was bathed in varying shades of bluish teal light. Soft red light washed over the band during a different song, growing redder and redder as the song crescendoed into sonic dissonance, before ebbing back into gentle rhythms — all while the red light followed the lead commanded by the music.

That’s not to say that Wilco didn’t take advantage of Mission Ballroom’s more advanced effects, especially when they played “Via Chicago.” The song, according to Tweedy, aims to re-create the sensation of walking underneath the L tracks in Chicago, where the band hails from. “Basically, [imagine] trying to have a conversation with someone you’re walking with and having it be completely destroyed or undermined by [the] brutal noise,” of a passing train, Tweedy said in an interview with Vulture. When performed live, the band utilized flashing, lurching lights to emulate the feeling of a train whizzing by overhead — a clever and surprisingly realistic immersion into the setting of a Chicago train station.

The band’s sparing usage of the venue’s full stage effects made moments of the nearly limitless bright lights stand out far more, helping emphasize the moment without becoming too overwhelming over the course of their lengthy set.

“We’re gonna pretend we left the stage…and we’re back,” Tweedy baldly joked into the mic at the end of their “first” set. Familiar with their fan base, Wilco seemed to know their fans would have demanded an encore regardless of how long they’d already played. “Wow what a spontaneous outpour of support,” he sarcastically said over the tin of the cheering crowd. After a few songs, the band this time left the stage, only to return after 10 minutes of ceaseless applause. They finished off their set with two more songs before finally calling it a night at just 10 minutes before 11 p.m.

Wilco’s music tends to invoke the imagery of a wintery landscape of snowcapped mountains and dead desert scrub. One almost feels compelled to lay motionless with seasonal depression as slow guitar melodies warble across the muffled, silent landscape of winter. Yet Ode to Joy certainly aims to help stave off the winter blues, and Wilco’s live performances are rousing enough to snap one out of their cold stupor and feel the embrace of warm and luscious tones.